This is a really interesting interview from MEMRI. Well worth the time it takes to watch

Well. We all have to be good at something. Right?

Turks came to Germany as ‘guest workers’. They were supposed to provide some “necessary cheap labor” and then leave. But it didn’t work out that way.

And the topic has obvious implications for our own Gang of 8?s guest worker plan, which is going to lead to non-workers bankrupting the social welfare system even further.

Three million Turks live already in Germany already, while 2.5 million of them have German nationality, and the majority of them are conservative Muslims.

Very few Turks in Germany have a regular job; about 20%. The other 80% live on the so-called Hartz IV (state social benefits). 70% of their children have no GCSE; they left school before they finished their basic education.

As the banner says, “Objects in history are closer than they appear”

Through ransoms paid for kidnapped Westerners. Kidnapping infidels and releasing them for ransom is fully sanctioned in Islamic law: “As for the captives, the amir [ruler] has the choice of taking the most beneficial action of four possibilities: the first to put them to death by cutting their necks; the second, to enslave them and apply the laws of slavery regarding their sale and manumission; the third, to ransom them in exchange for goods or prisoners; and fourth, to show favor to them and pardon them. Allah, may he be exalted, says, ‘When you encounter those [infidels] who deny [the Truth=Islam] then strike [their] necks’ (Qur’an sura 47, verse 4)” — Abu’l-Hasan al-Mawardi, al-Ahkam as-Sultaniyyah (The Laws of Islamic Governance), trans. by Dr. Asadullah Yate, (London), Ta-Ha Publishers Ltd., 1996, p. 192.

“Millions in Ransoms Fuel Militants’ Clout in West Africa,” by Adam Nossiter in the New York Times, December 12 (thanks to Twostellas):

BAMAKO, Mali — Oumar Ould Hamaha, a notorious Islamist commander in the deserts of western Africa, has nothing but disdain for the international powers he opposes or the hapless Westerners he and other militants subject to extreme deprivation, hunger, thirst and proselytizing for months on end.But he openly appreciates them for helping Islamists acquire the one thing they cannot do without.

“Lots of Western countries are paying enormous sums to the jihadists,” he said in a telephone interview from northern Mali, crowing about the hefty ransoms militants have collected in the region. “The source of our financing is the Western countries. They are paying for jihad.”

The U.S. State Department is actively considering negotiations with the Egyptian government for the transfer of custody of Omar Abdel-Rahman, also known as “the Blind Sheikh,” for humanitarian and health reasons, a source close to the the Obama administration told TheBlaze.

Glenn Beck revealed the controversial news on his show Monday.

The Blind Sheikh is currently serving a life sentence in American prison for his role in the 1993 World Trade Center bombing, but the newly-elected Islamist government in Egypt has been actively petitioning his release.  Many have pinpointed a cause of last week‘s unrest in in the country to be protests over the Blind Sheikh’s release — not an anti-Muslim YouTube video.

Although this video is dated, our team still felt it was worth doing as likely nothing has changed and chances are there is entire communities of people like this in Germany and across Europe.
Thanks to Tim at pi-News.net for the translation

...the Global Islamic Political Party working for the reestablishment of Khilafah

After Eeyore’s post from earlier today that still has my head spinning, here’s another story that beggar’s belief from the country that once used to stand up to totalitarian ideologies.

We all expect the Islamists and Jihadis to be dedicated to overthrowing our governments and overturning our way of life, and some of us get furious when we discover how inactive these governments are in the face of the threat, but when these selfsame governments are actively funding groups dedicated to their own destruction, with our money? Well this is a degree of ill-judgement which borders on lunacy.

How taxpayers are still funding the extremists

Millions of pounds of taxpayers’ money is still being paid to groups linked to Islamist extremism, more than a year after David Cameron vowed to outlaw the practice.

People associated with one “extremist” group whose grant was terminated after the Prime Minister’s pledge are now being used to induct new staff into the Government’s own Office of Security and Counter-Terrorism (OSCT), the Home Office division responsible for directing Britain’s anti-terror efforts. Only last week the same individuals were awarded thousands of pounds of fresh public funding.

Meanwhile, the Civil Service has solicited “fast-stream” recruits for the top ranks in Whitehall from a group which has hosted numerous extremists and terrorist supporters, including the al-Qaeda cleric Anwar al-Awlaki, who was linked to a number of international plots before his death last year.

Another body linked to the extremist sect Hizb ut-Tahrir, the public funding of which Mr Cameron condemned as long ago as 2009, is still receiving hundreds of thousands of pounds of taxpayers’ money, to educate primary-age children in Hizb ut-Tahrir ideology.nds of taxpayers’ money is still being paid to groups linked to Islamist extremism, more than a year after David Cameron vowed to outlaw the practice…

Raymond Ibrahim’s testimony to the US House of Representatives Human Rights Committee; on Shariah, Dhimmitude & the Copts; is a moving and eloquent absolute must watch.

In fifteen short minutes Mr Ibrahim amply demonstrates how the contemporary persecution of Coptic Christians in Egypt is a direct mirror of identical suffering meted out to his people for the fourteen previous centuries, using historical sources to back up his case.

This is no “accidental aberration” he conclusively proves, by pointing to the Quranic injunctions – the literal commands of god – that instruct Muslims to behave in the ways that lead to the inevitable suffering of any non-Muslim who falls under the reach of Islam’s power.

He also delves persuasively and depressingly into the historical events, and current dangerously misguided modes of thought (from history classes to the media), which have conspired to erect the “intellectual hurdles” that make unintelligible to a contemporary audience…

“…something that is fourteen hundred years old and is so obvious to anyone who has studied it or looked at it. 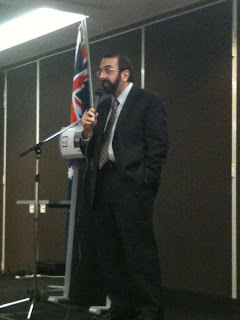 END_OF_DOCUMENT_TOKEN_TO_BE_REPLACED

Here is the first part of an article from New English Review. Please click this link for the whole thing.

I first encountered Gisèle Littman, better known as “Bat Ye’or,” through her book, The Dhimmi: Jews and Christians under Islam while browsing through a Judaica section of a Barnes & Noble book store in Westport, Connecticut in 1985.  Reading it opened my mind to the historical evidence of the subjugated treatment of Jews, Christians and other non-Muslims under shari’a in the wake of Islamic Jihad over conquered lands. Her book threw into considerable doubt the then fashionable medievalist commentary that Jews and Christians had been well treated in Al Andaluz, Muslim Spain and in the far reaches of the Caliphate of the Ottoman Empire. Bat Ye’or’s penetrating historical analysis in The Dhimmi was followed by further investigations into the plight of Christians under the system of Islamic shari’a  “dhimmitude.”  Dhimmitude as an historical concept, was coined by Bat Ye’or in 1983 to describe the legal and social conditions of Jews and Christians subjected to Islamic rule. The word dhimmitude comes from dhimmi, an Arabic word meaning “protected.” Bat Ye’or, through her latter writings plumbed the depths of Islamization of Europe with her major work, Eurabia: The Euro Arab Axis and the recently published, Europe Globalization and the Coming Universal Caliphate. See our review in this edition.

In a way I want Choudary to do something. Maybe then the royal family might actually be forced to address this problem. Silence from the Queen regarding the state of Britain these days is a slap in the face to Britons. In a fair and just world the only ones to show up for this wedding would be the Islamists. While a disgusted Britain stayed home.

The Daily Express… AN INVESTIGATION was launched last night into more than £1million of Government contracts awarded to the brother of Britain’s most notorious hate cleric who is plotting to ruin the Royal Wedding.

Vince Cable’s business department is examining whether funds given to Yazdani Choudary for IT training and apprenticeship projects over the past seven years were “allocated properly”.

Mr Choudary, 48, is the wealthy elder brother of Anjem Choudary, 44, whose fanatical groups such as Al-Muhajiroun and Islam4UK, are banned in Britain.

The latest group with which he is involved, Muslims Against Crusades, is planning to cause chaos at next week’s wedding with a “forceful demonstration”.

The group has warned Prince William “and his Nazi best man” Prince Harry that unless they immediately withdraw from the military, the “day which the nation has been dreaming of for so long will become a nightmare”. END_OF_DOCUMENT_TOKEN_TO_BE_REPLACED

When a Royal Navy warship  captured a crew of Somali pirates,  it seemed like a rare chance to  strike back at the ruthless sea gangsters.

The 17 outlaws were armed with an arsenal of AK 47s and rocket-propelled grenades, and had forced hostages on a hijacked fishing vessel to work as slaves for three months.

But instead of bringing them to justice, the British servicemen were ordered to provide the pirates halal meals, medical checks, cigarettes – and in one case even a nicotine patch – before releasing them in their own boats. Menace: A skiff carrying Somali pirates speds across the Indian Ocean, where they are causing mayhem

The extraordinary treatment – revealed in a Radio 4 documentary to be broadcast tonight – came at a time when Somali piracy is causing mayhem to shipping in the Indian Ocean.

(Later on in the article there is this absolute gem: “He also said he was unconvinced that they had enough evidence to convict the pirates – even though they were heavily armed, were carrying hostages and had confessed.”)

If this doesn’t really piss you off, please check your pulse.