This appears to be a short excerpt from a longer video.

Thank you Miss Piggy for the translation

This is what multiculturalism really mens. ANY culture but your own. Aufheben der Kultur

Macron appears to be responding to this, or a related event recently:

Piers Morgan: Liberals have become unbearable. They want to tell you how to lead you life and if you don’t do as they say, they’ll try to ruin it.

It’s a kind of fascism. This is why populism is rising. pic.twitter.com/TbhFhGP5DE

Of course Mr. Morgan is wrong. These things are not flaws. They are aspects of human culture. Not in any way flaws. Socialism seeks to obliterate all culture with the dialectic tool of “multiculturalism”. This must by necessity destroy all cultures, just like having people who identify as British driving on the left side of the road in Canada or the US will obliterate traffic.

Official multiculturalism is based on the idea that there is no unified Canadian society and no distinct Canadian identity to integrate into, and that we are just a collection of ethnic and religious tribes living side by side. pic.twitter.com/CyNU8JGjlh

We get huge fines for driving while texting etc.

Check out what this woman does while looking at her phone

Can anyone explain to me what the hell is going on at this wedding? ???pic.twitter.com/VUXWh1rA3u 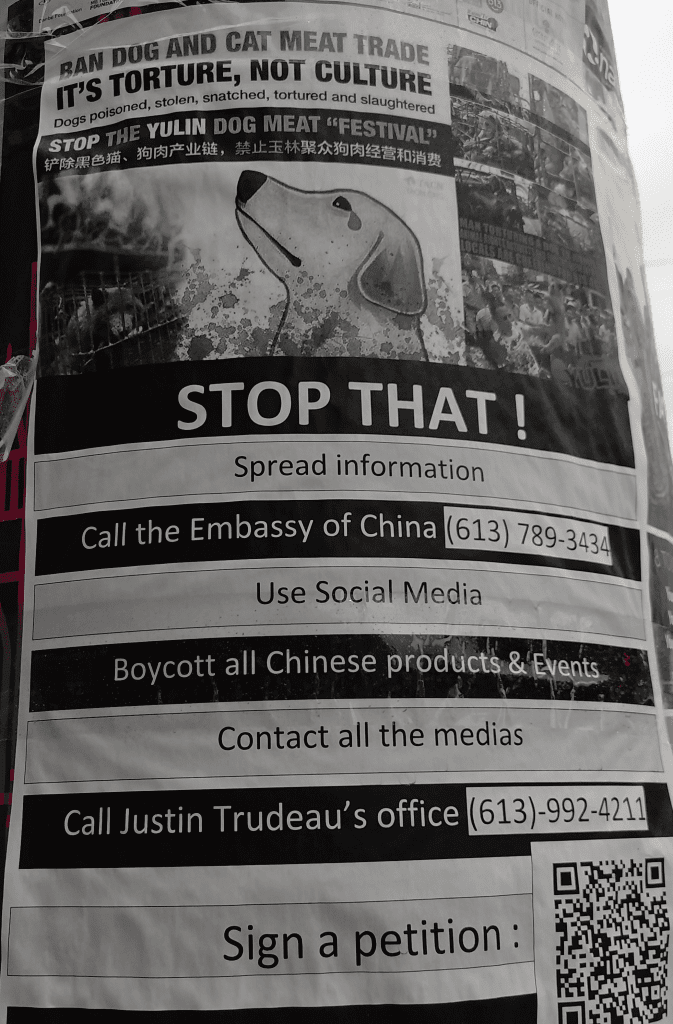 An interesting poster I thought, as it attempts to save the multicultural trope, while desperately trying to apply Canadian cultural standards to Chinese food customs.

In India, they stridently object to the eating of cows, as cows have a sacred place in Hindu society. So much so that in some cities, they still wander the streets and occasionally do huge damage to people and things.

In Islamic culture they do not eat pigs or use any porcine products for the opposite reason. That pigs are somehow unholy and should not be consumed or utilized in any way.

These are 100% cultural behaviours and rules.

In North America, we have dogs and cats inside our homes and in many cases occupy the position of children, and often at the expense of actually having children. This is our Western culture. We value dogs and cats. In parts of China apparently, they eat them.

Asking people to ban this practice is fine. It’s understandable. But claiming it is “not culture” is a desperate attempt to cling to a phoney multicultural narrative while insisting that other cultures conform to the cultural standards of the objector.

We must abandon the concept of multiculturalism. It simply cannot exist. It is a true oxymoron. To pick one example out of hundreds, people from England may not drive on the left hand side of the road in Toronto or New York simply because it is their culture to do so.

And no one wants to build a bullfighting ring in Edmonton.

Law is the formal codification of culture and that’s about all it really is. And that is why you cannot have more than one operating in any given area.

Lastly, I have yet to see any evidence that the concept of multiculturalism is not really just a rhetorical trick to force the world, but first the West, into a single mono-culture of Marxism at the expense of all cultures. And this would seem to culminate into the whole ‘new man, blank slate’ end game of Communism.

Selective enforcement means different societies exist, and so its not multicultural.

Thank you MissPIggy for this find and translation.

As readers of this site will more or less agree, Postmodernism seems to be the weaponization of language as a tool of deconstruction of classical thought and all its fruits, often or near always using justifications from Marx or evolutions of Marxist thought like Fascism etc.

A couple of examples of this might be the terms, “multiculturalism” and “diversity”, both of which really mean one monoculture of socialism with no differentiation between any history, peoples, cultures, or religions but composed of people with varying skin tones.

Let me offer a test on that.

Ask anyone who celebrated diversity and multiculturalism the following questions:

Thats really just a short list but it helps make the point.

Diversity and multiculturalism are code words for one, socialist, society at the expense of all cultures.

And so diversity, as it really is, won in the European elections for the most part.

Poland gets to remain Poland and be self determining in its laws, which one should have realized now is nothing less than the codification of culture and values.

Same for Hungary, England, France, Italy and all the other nations who voted against suicide. This is genuine multiculturalism and diversity. Each nation self determining and the rest of us get to cherry pick what parts of it we like and don’t like to enhance our own, and for our own reasons.

So it is with relief that we can continue the reporting on a Europe that chose to remain diverse and multicultural instead of a Soviet like super-state where decisions are made for ideological reasons and far, far, far from the people who suffer the consequences of those decisions.

The World has won with
Dominik Tarczynski????????

BUDAPEST (Reuters) – Hungary’s ruling right-wing Fidesz party won 52.14% of votes in the European parliamentary election on Sunday on a hardline anti-immigration platform, scoring a big victory over a divided opposition.

Prime Minister Viktor Orban told supporters of his Fidesz party that he would cooperate with everyone in Europe who wanted to halt immigration.

“The election victory means that … Hungarians gave us the task of … stopping immigration all across Europe,” Orban told cheering fans in Budapest.

More will be added over the course of the day.

Thanks to many who have been sending in materials overnight.

We can consider this election a victory in that we now have a platform from which to fight. It is not a victory yet as the hands of the left-islamic coalition are still firmly holding the levers which make things happen, but we did loosen the grip on the political levers that make it easy for them. So now we can launch the fight from somewhere.

Now we get to work.

If you click over to YT you will notice that this video has been placed in a limited state, presumably due to the contents. please feel free to comment here.

The author has made a video about this treatment:

I hope he doesn’t mind, but I put it over on FreeZoxee.com

Dear Computing forever: If this is a problem let me know right away and I WILL take it down.

Here is a video of a flash mob done in what appears to be a Hungarian shopping mall.

It is real diversity. Not the phoney stuff the communists peddle, which of course really means the destruction of all world cultures and their replacement with socialism and islam.

Notice how everyone in this video is Hungarian, and has a common understanding about their culture, language, history and values. That, dear friends is diversity. Because if you leave Hungary and go anywhere else, you get some other set of those attributes. Except of course where it has collapsed into the new Tower of Babel Soros (The Evil Palindrome) and the muslims have created.

And those Towers of Babel cannot stand for the same reason the original one could not.

Because to borrow a phrase from Penn & Teller from their BS episode on the Bible, The Tower of Babel could not be built because “you can only stack camel sh*t just so high”.

Thank you Blest Domains, for the video.

There may be more to the story, but here is the bit the people in the car released.

H/T Ava Lon, and several more. Thank you all.