Read details over at RAIR Foundation

FAKE NEWS: There are now a couple of comments that show that someone fabricated a story around a normal event. Thanks to C. and FakeNews, for the correction. It seems that the Krampus’ just beat everyone. That is what they do. Its part of the fun. They don’t beat people hard, although recently… but generally this is an annual tradition.

The following video takes place in the small Italian village of Vipiteno in the Alto Adige region of NE Italy but where German is the language used. Our Italian translator tell us that it is a very picturesque part of Italy, but visitors would think they were in Austria.

What takes place here according to what we can find out, is that a Christmas parade took place in the village and migrants came into the parade and tried to pull the masks off of the participants.

The people dressed as Krampus, a sort of evil Santa, or the coal bringer if you like, have traditional switches which they used to fight back against the invaders.

More can be found at this Italian news site.

Thank you Gary Fouse for your help on this.

You might almost think muslims do not see themselves as one of us, and that maybe they don’t like us that much.

This video will make you cry – These are not Pakistan but the Hindu temples of Delhi’s Chawri Bazar. Yesterday, a multitude of religious idols entered the temple and vandalised them Not by crooks or goons, hundreds of locals broke the temple,

shouting slogans of their religion

Comments are good as well.

“A temple was vandalised in Delhi’s Chandni Chowk after clashes broke out between two communities over a parking dispute on Sunday night (30 June), Press Trust of India has reported.

The incident is said to have happened after a man began assaulting a few intoxicated men over a parking dispute. The fight soon escalated and a mob vandalised a temple in the area at about 10 pm which triggered communal tensions…”

Maybe this will convince a few of the deaf-semi-left that islam isn’t such a great idea for the West after all. Nothing like a few million angry dog-moms to change policy.

According to a report by The Stream’s John Zmirak, as Muslims are increasingly moving to traditionally non-Islamic countries, there have been calls to bring and entrench at least some of their cultural norms, including their aversion to dogs.

In one of his latest reports, John Zmirak, a social and business writer, as well as a senior editor at The Stream, has cited a number of flyers that were circulated in Hoffman Park in Vancouver, asking dog owners to keep their “filthy” pets on leashes due to “Many Muslims living in the area”.

“Please keep your dogs on a leash and away from the Muslims who live in this community”, CTV Vancouver quoted the flyers as reading back in 2017. Mayor John Becker then notably came up with a vague reaction: while arguing that the notices had not been produced by the city, he said that there were “current bylaws in place that enforce areas for dogs to be on leash, except in designated off-leash areas”.

Zmirak went still further, citing another “weird, hyper-polite anomaly”, as Muslim politicians in the Netherlands, which has also seen a vast influx of immigrants over the past few years, had attempted to ban dogs from The Hague, the third biggest city in the country. In Spain, the author went on, local politicians managed to reject such a ban; however, by a twist of fate, a dog-poisoning spree followed closely.

This site has been tracking dog poisonings in parks in Canada near mosques for some time now.

You come home from work & find this taped to your door. What do you do? pic.twitter.com/HTOfYaA5ai

The following article is from an April 17 2019 link from the Ottawa Citizen.

It should be noted that this area over the last few years has become heavily islamic, and although the writing on the stick smacks of Christianity, there is not a long history of Christians smashing up other people’s iconography in Canada. And certainly not Catholics. Glass houses and all that.

Last March, we went and filmed the area after the same statue was ‘decapitated’ in what was to become a series of attacks on this same statue. That video below the article and more recent video from security camera footage of the current attack:

Members of a Heron Road Buddhist community say they are fearful after a statue of the Buddha was vandalized for the third time.

On the wood was written the First Commandment from the Bible: Thou shalt have no other gods before me.

Police confirmed they were called to a mischief complaint at the monastery Wednesday.

“This is the third time and the whole Buddhist community is threatened by this — it’s not only vandalizing a statue,” Jinananda Thero said.

“It is an uneasy feeling.”

This is a highly worthy rant on the state of things in France. I would ask you all to watch and spread this please.

Frankly France has had a Causus Belli with Islam now for a decade at least. At this point it doesn’t matter who lit the match at Notre Dame. There is more than enough already to start fighting back.

I made an error in the original title as well as in the video itself. This was not Maxime Lepante, but Pierre Cassen of Riposte Laïque

Very sorry, at the moment I do not even remember why I thought it was Maxime.

Please forgive. I will likely fix the video somehow later on.

(Alternate title: Who really burned down the Basilica of St. Denis)

An original translation by Oz-Rita with much thanks!

The Basilica of Saint-Denis is the last resting place of the Kings of France. 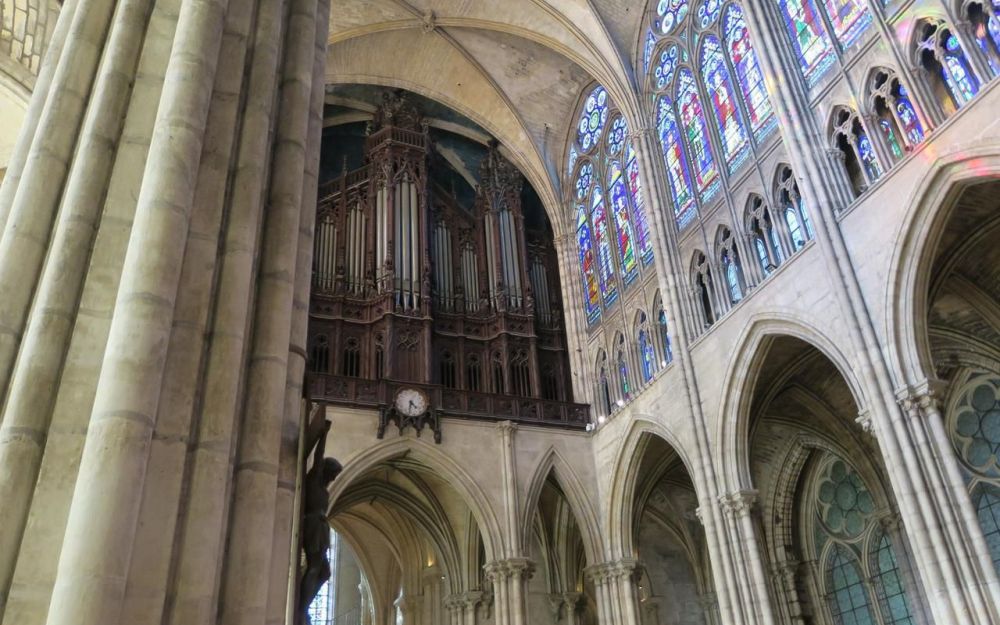 The accused is suspected of having damaged two doors, several stained glass windows and the organ of the Basilica of Saint-Denis at the beginning of March. LP/Gwenael Bumblebee

Saint-Denis: the alleged vandal of the basilica will be judged in May

A 41-year-old man appeared this Friday before the Court in Bobigny on charges of damaging the organ in the Basilica. The hearing has been postponed until May 10.

A dialogue of the deaf. “I don’t know how I’m involved in this case,” the defendant told the Bobigny court on Friday. Suspected of having damaging two doors, several stained glass windows and the organ of the Basilica of Saint-Denis in March, this 41-year-old man is being brought to trial for immediate appearance.

When asked whether he would prefer to postpone the date of his trial to prepare his defence, as provided for in the procedure, he replied that he “does not understand the French judicial system.”

Incriminated by his DNA

The 40-year-old was arrested on Thursday at the detention centre in Vincennes (Val-de-Marne), incriminated by his DNA found in the basilica. A Pakistani national, he arrived in France two months ago and does not speak French. He has already been cautioned by the law twice for damaging property in February.

Annoyed, the president of the court suggests that “the situation is not very difficult to understand” and reiterates her question. “How can I explain if I don’t understand it?” he persists.

The magistrate ended up wondering whether he “deliberately did not understand”. The court finally decided to postpone the trial until 10 May, and to place the accused in pre-trial detention until that date.

A psychiatric assessment was ordered.

As this individual will not be solvent, it is the taxpayer who will pay yet again

[Ed: Thank you Oz-Rita for the rapid translation!]

Thank you Tania Groth for getting the footage, and Ibn Al-Malek for the translation.

If the video does not show up or play after a few seconds, please try another browser. Chrome requires a plugin or ‘extension’ to properly play bit.tube videos.