We are currently working on restoring some of the videos that got taken down when Google decided our Youtube channel was too much of a threat to Islamic and leftist interests (one can only presume).

It is hard not to repost some of them as I remember them.

In this one, Robert Spencer was asked a question that contained pretty much every trope we hear when people discuss islam, and Robert handles it like only he can.

His full lecture can be seen here:

Anyone who has the opportunity to listen to Robert Spencer live and ask a question, may want to consider doing so. Win or lose this thing, Robert Spencer is a powerful voice for reason and one of the best analysts of the situation as it is in terms of Islam and the West.

This is a rare opportunity. Anyone that can make it to Grand Prairie Alta. on Oct. 29th, should try and do so. 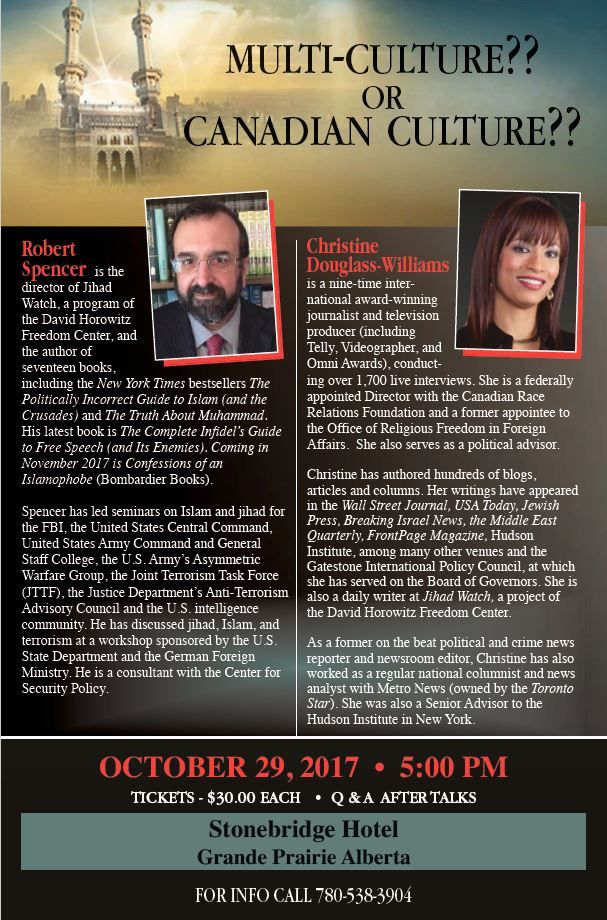 I have not seen this yet but its Robert Spencer.

In a sane world, there would be a statue of him in every major city.

This is a partial repost of a report from Free Speech Defence. Please read it at the source.

My post copied over from JihadWatch.org for those who were unable to read it, click through it you are able to, as the comments are also helpful…

This is not new. It has been ongoing for years: when fascists are unable to control the narrative, they shut down the discussion.

I am seeing now that most of the UK and many other European Internet service providers (ISPs) are blocking this as well as many other websites from being viewed.

Not content with shadow banning academics guilty of wrongspeak from social media, attempting to turn them into unpersons, they are using blocking methods originally developed but rarely used to block criminal enterprises on the web (think scammers and pedophiles) with far more alacrity than when they were ever used as originally intended.

They use a variety of methods to control what you are allowed to view online, much like how I had “guardian control” on our television to stop the kids from watching channels that were not suitable. Amusingly, I know of one home and office firewall company that is listing jihadwatch.org as “adult entertainment.” A provider in the UK, also listing Jihad Watch as adult, asks for credit card numbers to prove you are old enough to view the site.

Canada is introducing “measures,” specifically in Quebec, to block illegal gaming sites, which I would bet my last Loony on being leveraged in the same way, as soon as they criminalize “Islamophobia,” a.k.a. any criticism of jihad and the violence and crime that go hand-in-hand with Islam.

The conference rejected my suggestion to add the letters, “LOL” after the title topic for this amazing gathering but I can forgive them for that.

This is the first of a series of videos coming from this event which has taken much longer to present as the Government of Canada has decided that overnight by FEDEX really means sometime the following week. Fortunately there is thing called the internet and while the government spins its square wheels on  muddy roads the video found its way to the editor anyway. FWIW the camera card is still not here.

Later today, we are hoping for Stephen Coughlin.