One might consider this an example of the dialectic negation of Western culture. One, perhaps Muslim, perhaps not, complaint might be enough to stop a church bell. Because tolerance. But the thousands of complaints within Germany of blasting minarets fall on deaf ears because ‘islamophobia’.

This isn’t simply selective enforcement. This is Soros’ reflexivity used a la Marcuse, enforcing the minority view on the majority for the purpose of negating that majority.

Below, the Habermas video:

This fellow is very bright and really interesting. But he speaks very quickly so for those of us that do not speak fluent German, focus. Be prepared to read quickly.

A lot of what he refers to is what we typically avoid as “insider baseball”. Material that is so deep in the minutia of the workings of that nation or party that it holds no general interest. But to long time readers of this site, many of the refrences he makes are to people we have covered in the past in some detail. For example, Thilo Sarazin. A man who was head of the Bundesbank for some time in Germany till his open rational comments about immigration and Islam ended his career.

He then spoke at universities under heavy security but eventually got cancelled. We may restore some of his videos over the next weeks as time permits.

But one of the references in this young man’s ‘rant’ was about how ANTIFA cancelled a woman Cabaret artist. This was interesting enough to alert Oz-Rita to it, who watched some of her material and felt it was quite brilliant, subtle push back against the state communist mandatory narrative. And for this, ANTIFA made sure she was cancelled out of a large performance. This is all detailed in the top video.

One of her performances, which has content that likely got ANTIFA excited about her in exactly the wrong way, is posted below.

It should be understood that ANTIFA has been directly and undenoiably linked as supported and funded by Merkel, her party, and teh Green Party as well as Die Linke, the Left party in Germany.

THis means that Merkel, the actual chancellor of Germany, is using an anti-state to enforce a communist narrative entirely outside of law and any kind of state procedure as people expect to be governed.

Thank you Helleuin GB for the herculean task that translating this first video must have been, Oz-Rita for scanning the material of this wonderful Cabaret artist, and translating one of her bits. And Gates of Vienna for the editing on these, as well as all the videos we title.

(Poor internet connection creates complication with the audio. We will fix this in time)

First, British police are told they don’t really have the right to treat government guidance for Corona restrictions as law, as it is not. The real shame here of course is the people who submit to irrational and illegal authority, be it police or worse, in Canada, bylaw officers who illegally demand names and identification and issue obscene fines to people for sitting alone on a bench or playing with a metal detector in a park.

From The Manchester Evening News:

Police have been told they have “no powers” to enforce two-metre social distancing in England.

The claim comes as from today, people will be allowed to spend an unlimited amount of time in parks and other outdoor public spaces, where they can keep two metres apart from others who are not part of their household.

As well as that, those who are unable to work from home have been encouraged to return to the workplace if it is open – causing busy commutes.

But fresh guidelines issued by the College of Policing and the National Police Chiefs’ Council urges officers to only enforce what is written in law and that “government guidance is not enforceable, for example two-metre distancing, avoiding public transport or the wearing of face coverings in enclosed spaces”.

The advice, set out in a document published on Wednesday after being sent out to forces on Tuesday night, follows updated coronavirus legislation coming into force.

Neither the original Health Protection (Coronavirus, Restrictions) (England) Regulations 2020 from March 26 nor the amended enacted at 12.01am on Wednesday address social distancing specifically, so keeping two metres (6ft) apart in certain circumstances is not a legal requirement.

Last weekend, Greater Manchester Police had to deal with ‘the busiest weekend since lockdown began’ as people celebrated VE Day.

Those people who called in to report their neighbours should really look for a nice cell in North Korea.

Meanwhile, Germany, not to be outdone by Ottawa or Michigan, has made it a prison worthy offence to even try and damage an EU flag.

Really. From the BBC: 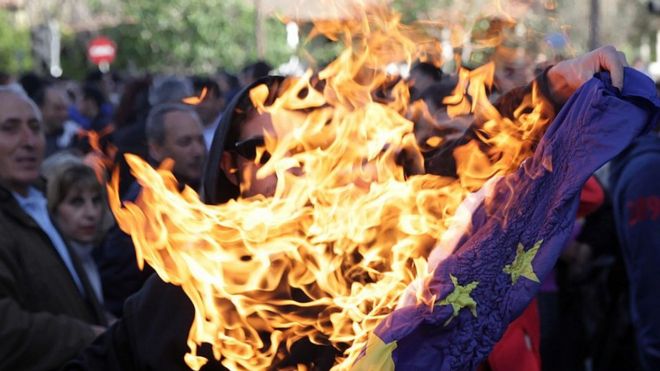 Germany has made public burning of the EU flag or that of another country punishable by up to three years in jail, classing it as a hate crime.

The vote in the Bundestag (parliament) on Thursday makes defiling foreign flags equal to the crime of defiling the German flag.

The same applies for the EU anthem, Beethoven’s Ode to Joy theme.

The move followed Social Democrat (SPD) complaints about protesters’ burning of the Israeli flag in Berlin in 2017.

Justice Minister Christine Lambrecht, a member of the centre-left SPD, said “burning flags publicly has nothing to do with peaceful protests”. She said it stoked up “hatred, anger and aggression”, and hurt many people’s feelings.

The new law also applies to acts of defilement besides burning, such as publicly ripping a flag up. Public display of the Nazi swastika and other Nazi symbols is already banned in Germany.

The far-right Alternative for Germany (AfD) has condemned the new law as “excessive interference in free speech and artistic expression”.

Interesting how Germany has found a way to protect its socialist symbols but blame the law on the Jews. I wonder how a German leader could ever have thought of that. Also, if a student was learning to play Ode to Joy, admittedly one of, if not the greatest musical work ever written by man, and mangled it in the performance, is that now a political, and not just a musical crime? The EU should never have been allowed to usurp that music. It was not original, it was not written for that purpose, and the author is dead and has no chance to claim the copyright and stop its use for that purpose.

Hard to keep track of all these. The message is, breaking up with a muslim doesn’t mean you are safe from him. 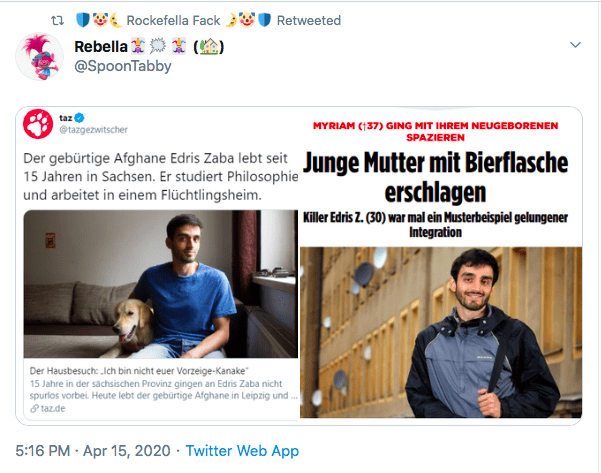 Erdis Zaba was born in Afghanistan and has been living in Saxony for 15 years. He studies philosophy and works in a refugee home.
“I’m not your poster child”. Living 15 years in the Saxon province has left its mark on Erdis Z. Today the native Afghan lives in Leipzig and…

Young Mother killed with beer bottle -A young mother, her baby in her arms – beaten to death while walking in the woods, apparently by her ex-boyfriend (Erdis Z., 30)! One week after the cruel crime, a man has at least partially admitted the crime. An investigator describes the suspected perpetrator as a “model refugee who has become violent”.

Thank you MissPiggy for the find and the translation

An original translation by MissPiggy with much thanks

(The body of the Hessian finance minister was so badly mutilated on the tracks, that there was difficulty identifying the body)

We are currently experiencing what is perhaps the greatest crisis since the foundation of Federal Republic of Germany. The events are coming thick and fast, and emergency laws are being passed to mitigate the consequences of the pandemic for our economy.

Among the many news reports, one particularly shocked me: Yesterday Thomas Schäfer took his own life.

The Hessian Finance Minister was known for being a man of action. He was regarded as level-headed and reliable. He was an experienced politician who took his responsibilities very seriously. Now, in the Corona crisis, Thomas Schäfer played a central role in the state government as a crisis manager.

This man has now taken his own life.

In a farewell letter he explained the reasons for his suicide. He was desperate and saw no way out. He could no longer bear the current situation in Germany. The concern that he would not be able to meet the expectations of the population had crushed him, reported Prime Minister Bouffier. (1)

What’s happening? Never before in the history of the Federal Republic of Germany has a minister ended his life because he cannot bear the responsibility. That shows how dramatic the situation is.

Thomas Schäfer leaves behind a wife and two children who now have to cope with this terrible loss. My deepest sympathy goes to them.

We must look ahead and tackle the problems. That is why I have added a small quote from the “Glass Bead Game” by Hermann Hesse to this funeral announcement. Let us use the crisis to rise above ourselves.

God doesn’t send desperation to kill us. He sends it to bring new life into us.

From this German language News site: 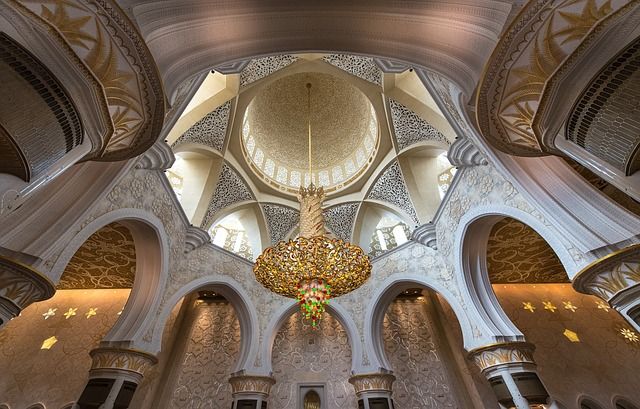 Garbsen – In order to prevent the rapid spread of coronavirus infection, people’s social contacts must be massively limited – including at Church. The congregation are supposed to be encouraged by the daily bell ringing. Even in Garbsen the church bells ring at some churches every evening around 19:00.

The city of Garbsen responded to a press request as follows:

In connection with the Corona crisis, the Christian parishes decided to ring the church bells every day at around 6 p.m. The mosque communities in Garbsen wanted to join this sign of solidarity and community. They informed the city of Garbsen about this in advance.
The fundamental right of religious freedom and the free exercise of religion applies here. This fundamental right applies to churches, mosques, synagogues and other religious communities.

Please click through to RAIR Foundation for the details of the story.