On Aug 15, 2019, a delegation of the pro-Israel “Alternative for Germany” (AfD) party visited Judea and Samaria (GP reported) and received a guided tour of illegal Arab settlements funded by the EU. A Gateway Pundit exclusive video.

“This whole area was supposed to provide homes for 10.000 Jewish families”, says Naomi Linder Kahn of NGO “Regavim“, standing on Mt. Scopus outside Jerusalem, pointing at a vast barren expanse stretching toward the Dead Sea along Highway 1. The highway is of critical strategic importance for Israel, since it is the only gap in the ring of Arab areas surrounding the capital of Jerusalem.

“The best way to secure territory like this is to settle Jewish families there. But the Obama government intervened and stopped what they call ‘illegal settlements’, even though this is entirely Israeli territory. So now we have the infamous Road to Nowhere here, which was built but never used.”

(For those that have an issue with these areas intended to be settled by Jewish people, please complain first to the many many Islamic nations that do not allow anyone other than Muslims to live as equals in those nations. Thank you.)

It looks like this isn’t the first time Soros has used a phoney set of documents to try and destroy a leader who represents his people’s interests rather than Soros and his.
(Also note the Canadian socialist connection)

We checked in with the bus drivers in Gaza. Turns out they are being forced by Hamas to bring people to the border fence against their will. pic.twitter.com/D1UOydF1eZ

Using an expected world-wide media blitz of selective enforcement as is usual for Gazanian death theatre against Israel, the beginning of what is likely a 2 week lethal play of victimization in response to the incendiary and rock throwing provocations of the muslims of Gaza has begun.

This article will be updated with news stories, videos and analysis as it comes in, till something deserving of a new post happens across our awareness.

Caroline Glick on Hamas’ partners on the war against Israel:

Breitbart offers this explanation for the events at the Israel Gaza border:

UN is an Anti-USA, Anti-Christian, Anti-Jewish Islamic Supremist Hate Group that has WATCHED & SUPPORTED the extermination of Jews & Christians throughout the World…

Today is anti-Israel day according to Iran, who is the core of the organization of antisemitic marches across the world, thinly disguised as objections to the existence of the state of Israel.

We have a friend at the demo who I will not name for now, to keep them safe but will send photos and updates as events dictate.

It is still some time before the demo begins, but they did send a photo of the US consul with a large rainbow banner hanging from it, which is right at the location of the demo, as is the Toronto Masjid. 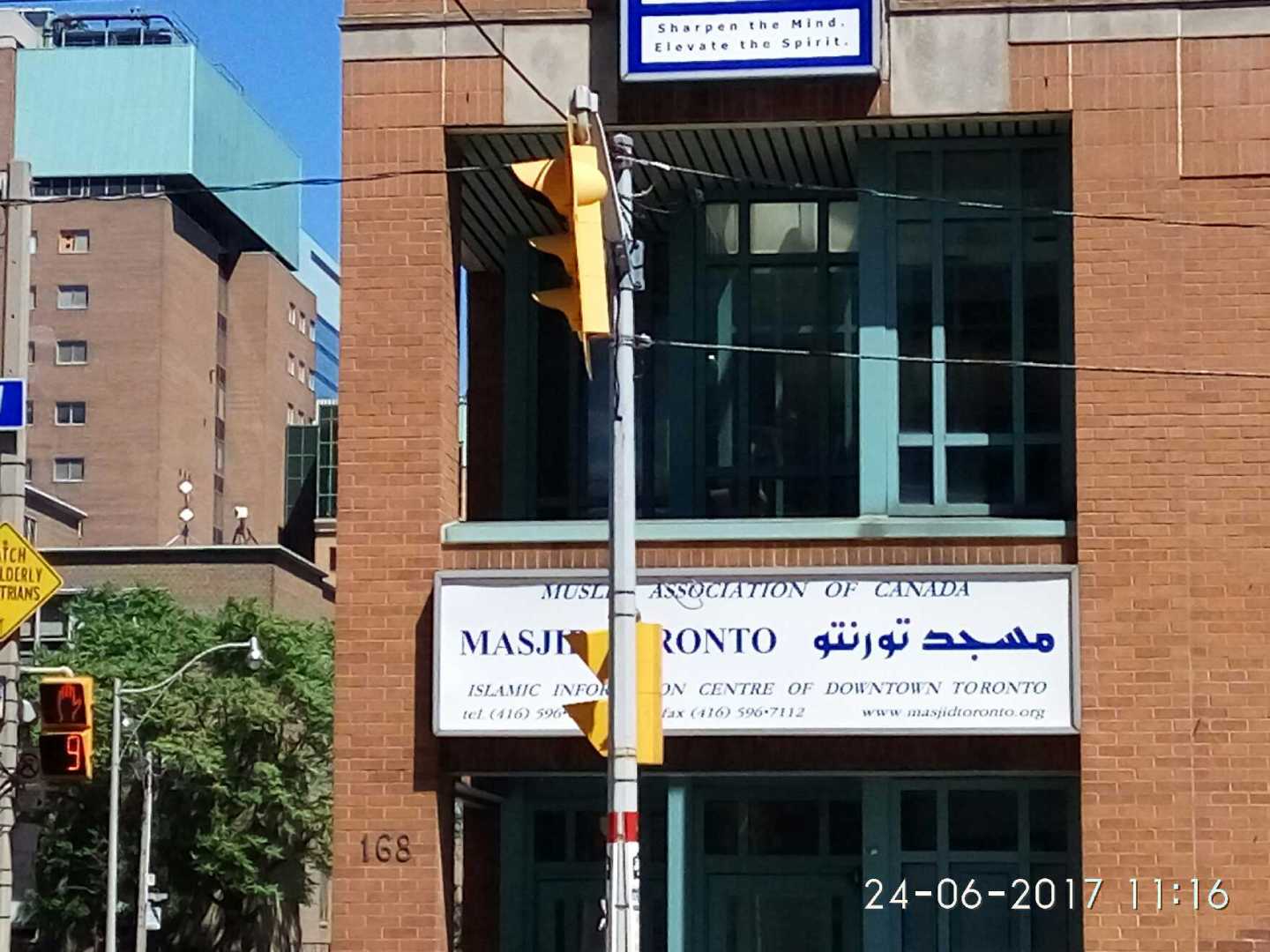 The one made semi-famous by the number of imams, one of them a prominent Toronto eye surgeon, demanding death to all the Jewish people of the world. Updates will be added TO THE BOTTOM of this post as they come in.

So please start checking this post now and again as of 2:00 ET today when it begins. 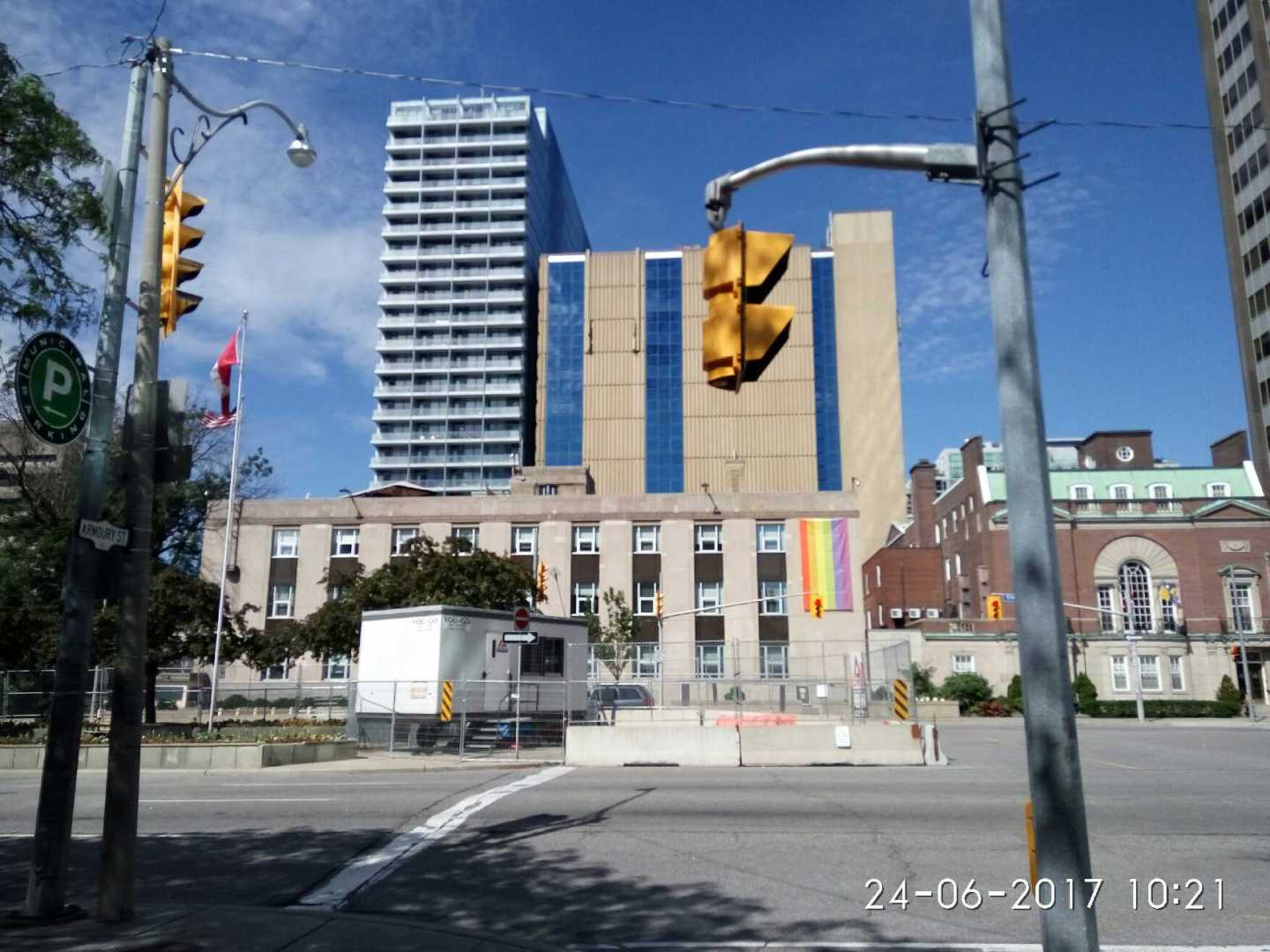 US consul in Toronto celebrates having sexual contact with unusual things.

1:45 PM, no one at the location but police and a paramedic SUV. Still fifteen minutes till the destroy-Israel march is set to begin.

2:17 PM, Counter-demo, JDL and so on appearing. Cops keeping both sides more than a brick throw apart. 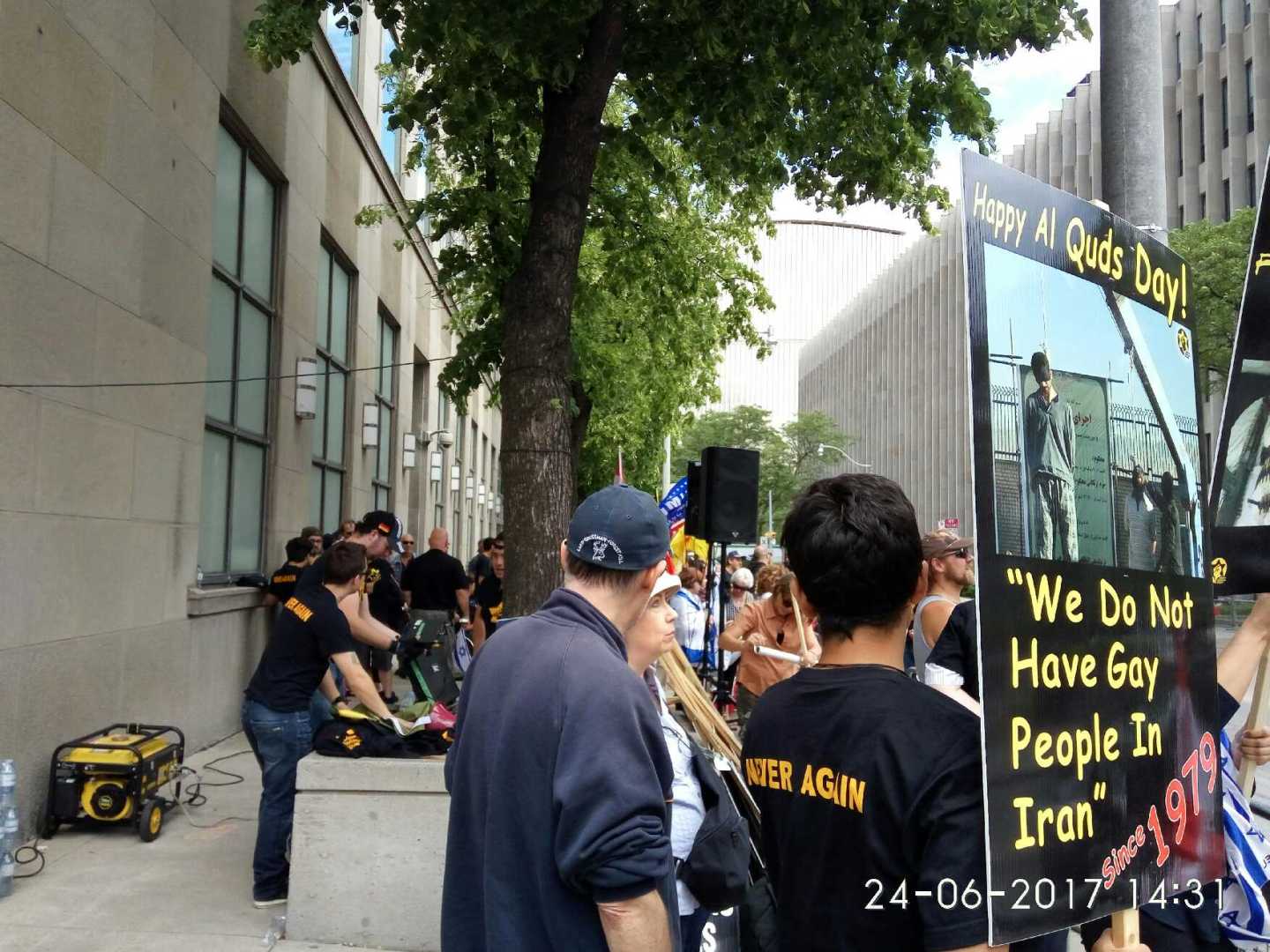 3:02 PM, it is rumoured that Antifa is approaching the area West to East on Armour Ave. and Hamas people, North to South on University Ave.

There is a marked rise in Police numbers. The counter protestors are at the corner of University, and something the auto-correct spell checker on our source’s phone changed to, “armpit avenue”.

5:45 PM and now hundreds of Antisemitic Muslims can be seen marching towards the location. The number of police has shot up dramatically. 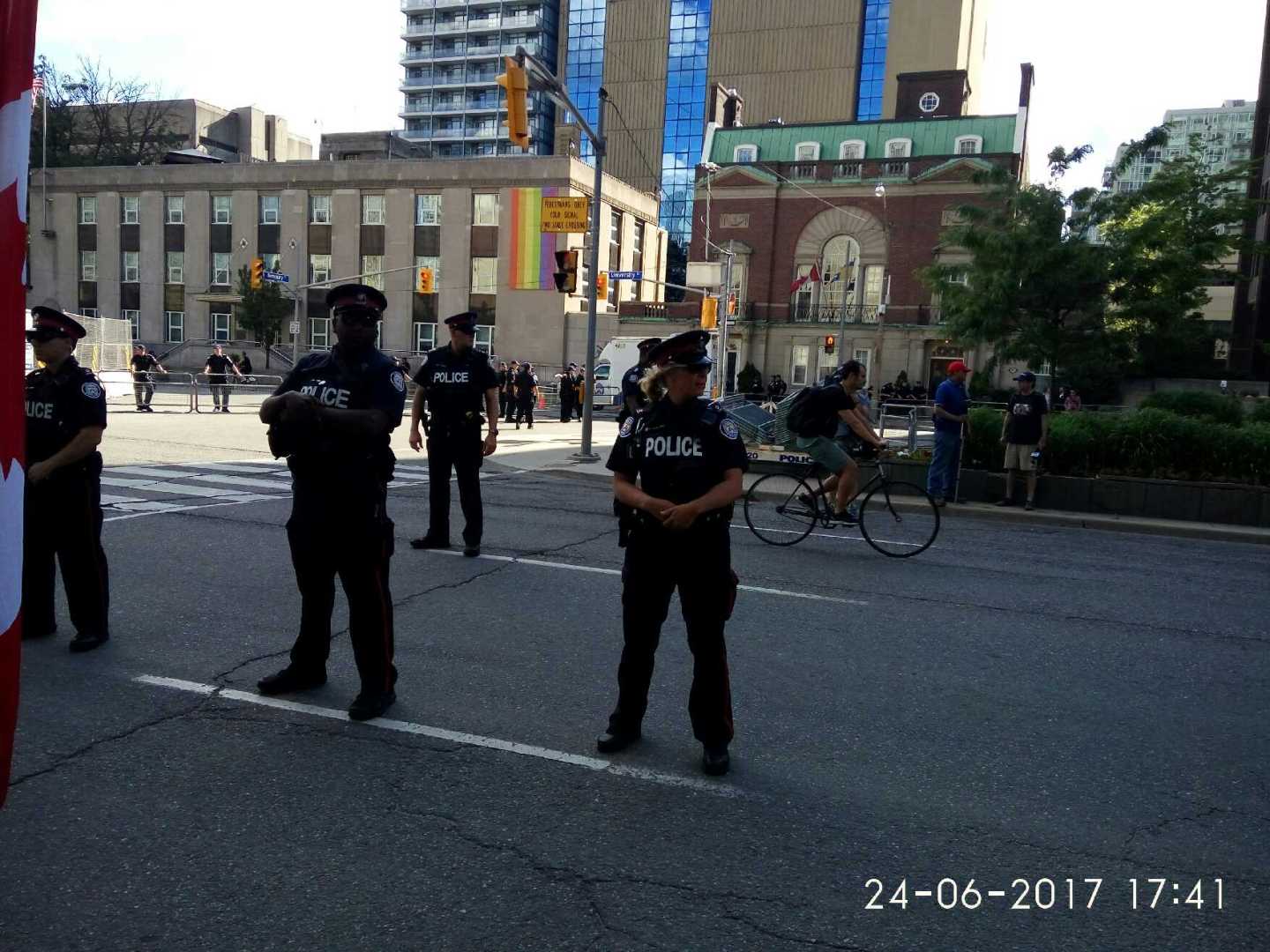 This article also explains much about the killer.

First, a short video of the fight:

Ruling party and opposition Turkish lawmakers on Monday exchanged punches and hurled water bottles at each other as a new mass brawl erupted in parliament over changes to the constitution, television broadcasts showed.

Parliament’s constitutional committee was meeting to discuss a government-backed proposal to strip MPs of their immunity, after last week’s session also broke up in violence.

Here is a longer video of better quality but I didn’t see that much happened in it.

I’ll have to go over it again and mine for good bits.

Below, a shorter video of the fight as it should be seen around the world

All this and more is written in a report from January 19th. Rainer Kallwait, ordinance department leader for Bäder GmbH, wrote the report for the safety related services of Bäder GmbH. The city administration has confirmed the authenticity of the report.

Kallweit writes of a memo from Johannisbad Swimming Pool. In it it says, among other things: One asylum seeker masturbated in the whirlpool and ejaculated into the water. It is recorded on surveillance camera.” And, “The swimming pool supervisor threw him out. The asylum seeker came back with comrades to get his cell phone. Together the “visitors”, hooting and jeering, took a selfie in the whirlpool.”

The day before “8 foreign men… were in the Sauma”. “The local people felt harassed. When women are in the Sauna, asylum seekers are now told that the Sauna is closed.”

In general refugees only have free access to the swimming pool. They would have to pay for the use of the Sauna. But they won’t do that, according to Bäder GmbH: “When they were prompted to pay up at the register, they turned around, laughed and left.”

Similar can be read in a memo of „Glück-Auf-Schwimmhalle“, Halle, in Kallwait’s report. A group of “youths, single men and children with guardians” visited said pool in Halle on January 9th. Since none of them could swim, “they used the kids pool.”

”The users contaminated the pool by way of emptying their intestines. Local guests immediately left the pool.”

The report continues: “Furthermore the pool supervisors have to protect women and girls from the asylum seekers. Young men try to forcibly gain access into women’s and girls’ changing rooms. Those acts so far could be deterred.”

Ordinance leader Kallweit wrote, that the Glück-Auf-Schwimmhalle will not let any asylum seekers inside in the future.

First, “they have to be told about user regulations and what is appropriate behavior towards women and girls in swim suits.”

Images at this URL

Angry Iranian protesters stormed Saudi Arabia’s embassy in Tehran in the early hours of Sunday, smashing furniture and starting fires before being removed by the police.

The protesters had gathered outside the embassy to protest against Saudi Arabia’s execution of Nimr al-Nimr, a prominent cleric from the kingdom’s Shi’ite minority, on terrorism charges that Iran said were unjustified.

They then broke into the building and lit fires inside before being cleared by police, the ISNA news agency reported. Images shared on social media appeared to show protesters smashing furniture inside the embassy.

In March 2014, Oz-Rita and our team translated and subtitled this video about a man who turned out to be the planner, (who the mass media pins the adjective of ‘mastermind’) of the Paris attacks of Nov. 15 – 2015 He describes the coming formation of the Caliphate and more. He was well known and broadcast across Europe more than a year and a half before this attack. This is a newly uploaded copy of that video we did in March 2014 as the channel we had posted it on, has been taken down. Thank you again Oz-Rita for doing this translation, and reminding me we did it. Turns out that it is of some significance.

This Iranian regime video was released via the JAM agency, the IRI’s state extra-national information service for Internet etc. With thanks to Shabnam for her help in translating the Farsi, we can bring you the details, although the message is pretty obvious for anyone who has ever seen Jerusalem from any angle. The arial shot near the end is especially foreboding perhaps.