This has nearly EIGHT MILLION VIEWS!

Here are the corrections and details as provided by Oz-Rita with much thanks concerning the incident in France yesterday.

From Generation Identitaire via Oz-Rita, a communique for the event depicted below: 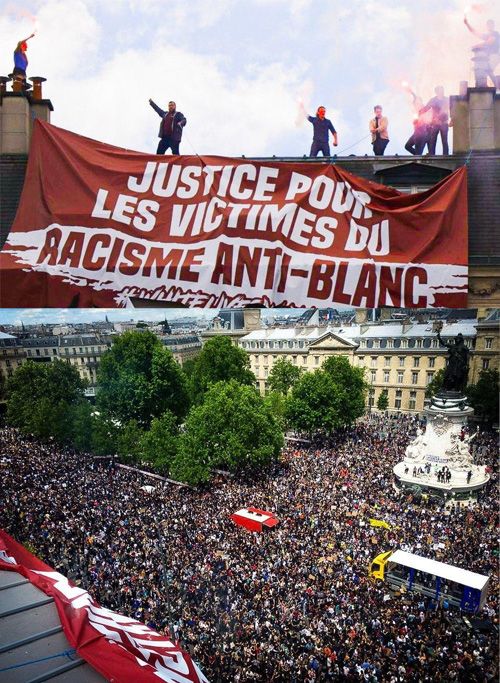 Justice for the victims of Anti-White Racism

This Saturday, June 13, Génération Identitaire invited itself to the demonstration of Assa Traoré, Place de la République in Paris, to denounce the explosion of anti-white racism.

The young Identity Generation displayed a large banner on the facade of a building with the message: “Justice for the victims of anti-white racism – #WhiteLivesMatter”.

The death of George Floyd in the United States led to an unprecedented wave of violence on the fringes of the Black Lives Matter movement.

In France, the “Justice for Adama” committee, named after the delinquent Adama Traoré, who died in 2016 during an arrest, is taking advantage of this phenomenon to accuse the police and, through them, our country and its institutions, of racism.

The committee goes so far as to demand that all “gendarmes and police officers put one knee to the ground with their fists raised. ” (sic)

Génération Identitaire demands from Christophe Castaner, (Interior Minister in the Macron Government and increasingly unpopular among the French Police) the immediate abandonment of all persecution against his own police officers, such as the presumption of racism and the suppression of the stranglehold lock.

Finally, Génération Identitaire warns all enemies of France: we will never get down on one knee!

The inhabitants of the floor below the banner of the GI (generation identitaire)…took to scissors and cut up the banner from below. They (the destroyers) got loudly applauded by the mob of protesters.

I have meanwhile also seen MSM reports (including here on State Media SBS in Australia), who totally misreportet and called the Generation Identitaire “extreme right” etc. The usual attacks and slanders.

French police have had two demonstrations already against the same minister, Christophe Castaner, that Gen Ident spoke against, where the police threw their handcuffs on the floor.

There is also video of that.

Thank you for this effort Oz-Rta

The chants of “Filthy Jew” by the Muslim aligned, ANTIFA/BLM protestors can be heard in this video

To be clear, this is the doctrine of Islam as it is taught everywhere. Some are more open about it than others. But this is Islam. We openly demonize Nazis and the “far right” for espousing similar degrees of antisemitism. I do not understand why muslims dressed in religious garb, or otherwise showing high degrees of adherence get a pass.

Special thanks to Andrew Bostom for finding the clips and the times.

Likely related to this article. If it is, there should be a lot more on this story as the day progresses.

The U.S. Commission on International Religious Freedom held a hearing to discuss efforts to combat anti-Semitism around the world. The commission heard from panelists from the State Department, United Nations, Anti-Defamation League, American University, Emory University, and the Simon Wiesenthal Center, on domestic and global anti-Semitic trends and their recommendations for the commission

So about that decision to not hold the killer of Sarah Halimi responsible. The clip below is a rather stellar piece of double think by a minister of justice in France. This is where they claim that they are following rule of law by abandoning it altogether when it suits the Neo-Marxist narrative.

There could not be a more clear cut case of a hate crime should such a thing exist at all. But he was found not responsible by reason of insanity and that was that. This site followed that case very closely and searching for Sarah Halimi will bring up a lot of articles.

Stephen Coughlin would almost certainly call this Repressive Tolerance. A Frankfurt School semantic device to accomplish exactly this thing. Hold up the highest possible standard of the law where it is a disadvantage to modern nation states, and make sure it doesn’t apply at all where it is to the advantage of anyone problematic to Western nations, people, and thought.

Thank you Miss Piggy for wading through this horror show.

I guess the question is, Turk or Moroccan?

This is my interview for RAIR Foundation with the blogger who had a number of police literally break down his door to arrest him for “islamophobia” in the UK in late October. But @AmyMek over at RAIR Foundation did some great detective work and discovered a few things about the event that need to be know for the full gravity of this arrest to fall into focus.

For example, the associate of Mayor Khan who led the police in this obscene arrest also has another job…