Please read the background details at RAIR. They do matter and make a difference to the full understanding of this great story.

For a description of the story please see RAIR Foundation here.

In a fortuitous meeting at Strathcona park on July 1st, we managed to get an interview out of co-founder of Canadian Front Line Nurses. An organization dedicated to providing proper health care despite bureaucratic interference and mandates. Nurse Sarah Choujounian stresses a wholistic approach to medicine whenever possible. She was also the first nurse to be fired for refusing the injections. Injections which increasingly appear to be a ferociously dangerous health choice.

Quite a few PPC candidates spoke at the Stratchcona event despite the Ottawa government acting in bad faith and withdrawing the permit at the last moment. And that, after the permit itself was issued with conditions that would require a specially equipped Delorian to fulfill.

For the background and story details, please see:

Some updates on this story:

If you want to join the march:
•  For the day: Please come to the beginning location for the day (find it by checking the location on GPS Live link on www.canadamarches.com) and to have a recovery vehicle set should you need to depart before the end of day.
•  For multiple days. Please state the period, where you are, where you intend to join us. We are limited in our ability to expand our on the ground team. You will need to arrange for your own accommodations, support vehicle (RV, camper) as we will not be able to accommodate such requests.
• Include in your email your plan and intent if you desire a response, as well subject line: “Attn: Joining the march for 1 day” or “Attn: Joining the march for multiple days“
For Donations and Merch Shop. You can send donations as e-transfers to this address (canadamarches@protonmail.com). We aim to have the Merch shop up and running by June 10. At that point you will be able to purchase CM t-shirts and make donations with your VISA.

Stuart Kirk dares speak against the imposed pseudo-reality, a prime component of which, is the notion of man-caused, global warming or climate-change. The science doesn’t actually support the hypothesis. But the whole world must factor it in to all descisions in officialdom. Hence imposed pseudo-reality. Therefore any authoritative refutation with actual reality generally has negative consequences to the speaker. In this case, he was suspended from his position.

Here is what the Financial Post says about Mr. Kirk:

HSBC executive Stuart Kirk, now suspended, delivered an evisceration of the doomster climatism that has been driving official investment chatter for years.

Please welcome to our stage Stuart Kirk, who was suspended over the weekend from his post as global head of responsible investing at HSBC Asset Management, a wing of the giant London-based global banking group. His crime? He delivered a brilliant 15-minute presentation to a Financial Times Moral Money conference last Thursday in London. Hold your applause. It is best, before reading this column, to go straight to YouTube and watch Kirk’s minute-by-minute evisceration of the doomster climatism that has been driving official investment chatter for much of the past few years.

The title of his presentation, jammed in among others from the investment, governance and consulting world, was titled “Why Investors need not worry about climate change.” Within a minute, Kirk — a former FT journalist — highlighted his “heresy” with a slide that referred to “unsubstantiated, shrill, partisan, self-serving, apocalyptic warnings that are ALWAYS wrong.” Below that line were a list of climate investment perpetrators: Mark Carney, Henry Paulson, the United Nations, the Bank of England, the World Economic Forum (now meeting in Davos).

Please read the rest at the Financial Times.

Once upon a time there was a beautiful old country manor. It was built long ago by hard working people who made it to last for their descendants, so long as they could work hard, and maintain the beautiful home that was left to them.

Generations later, some who lived there noticed that some of the rooms had become uninhabitable and the space for the owners had been reduced by a fair amount. Sure, sometimes they could go in to the old rooms if they were very very quiet and didn’t try and fix or adjust anything or even let their presence be known in these rooms. But basically they had lost the use of the space, and seemed genuinely puzzled as to why this was the case.

One day, a Danish architect came in and dragged some of the owners of the manor house into the lost rooms and pointed at a giant and expanding hornets nest and said, “these are why you can’t use parts of your own home anymore and soon, you won’t be able to use any of it”.

They didn’t believe him and called him names, because they did not want to have to face the difficult fact that they had allowed their ancestral and only home to be taken over in this way, and by such hostile and dangerous invaders.

So the architect decided to poke the nest with a stick and show the residents what these new residents were like, and make it undeniable that they had to face the facts and deal with them, or surrender the house to the hornets.

The residents decided that now was the time to charge the architect with the crime of forcing reality on them. No one likes an alarm clock when all you want to do is sleep.

Actually watch this one and not just listen. Something kinda fun happens during the interview when a patriot vehicle blows through the barriers and a police van chase it down.

Please see RAIR Foundation’s write up on this video here.

Member of European Parliament & former judge @mislavkolakusic saying out loud – very loudly – what needs to be said & what people need to hear. A stain on Canada is what @JustinTrudeau is. And he has new company with @theJagmeetSingh. Tyrants of feather violate rights together. pic.twitter.com/9cCfDY7XtI

Its better with subtitles and his own original passionate inflections:

The protests in Ottawa Continue: 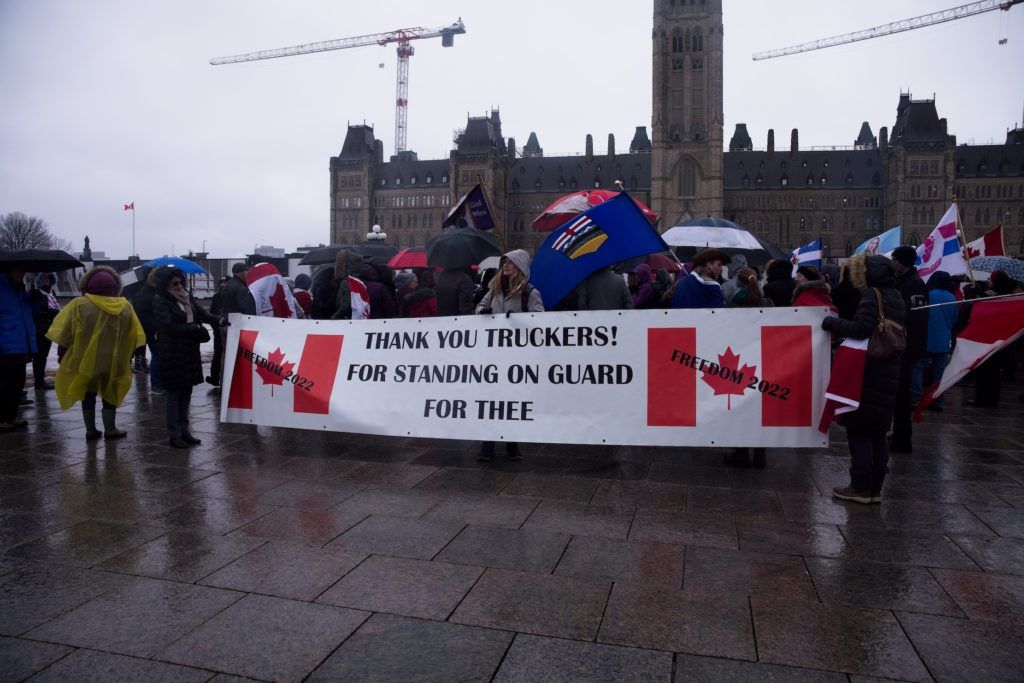 Please see the details over at RAIR Foundation.com.

Also, I believe that Saturday was another of the World Wide protests against government overreach. The Ottawa one was token, but the main event was in Toronto I believe. Still, check these videos out from Ottawa.

Interview with a man beaten by police with rifle butts

(I need to add that I inset a video I found online of a man in Ottawa on that day being beaten with a rifle butt by police. I do not know for a fact that it is the person I am talking to here in the video. If I see him again I will ask. It is a real video of the event he refers to, at the same place and time. but I do not know for a fact if it was he who is in the inset video)

Catholic procession into Parliament Hill in support of the Truckers 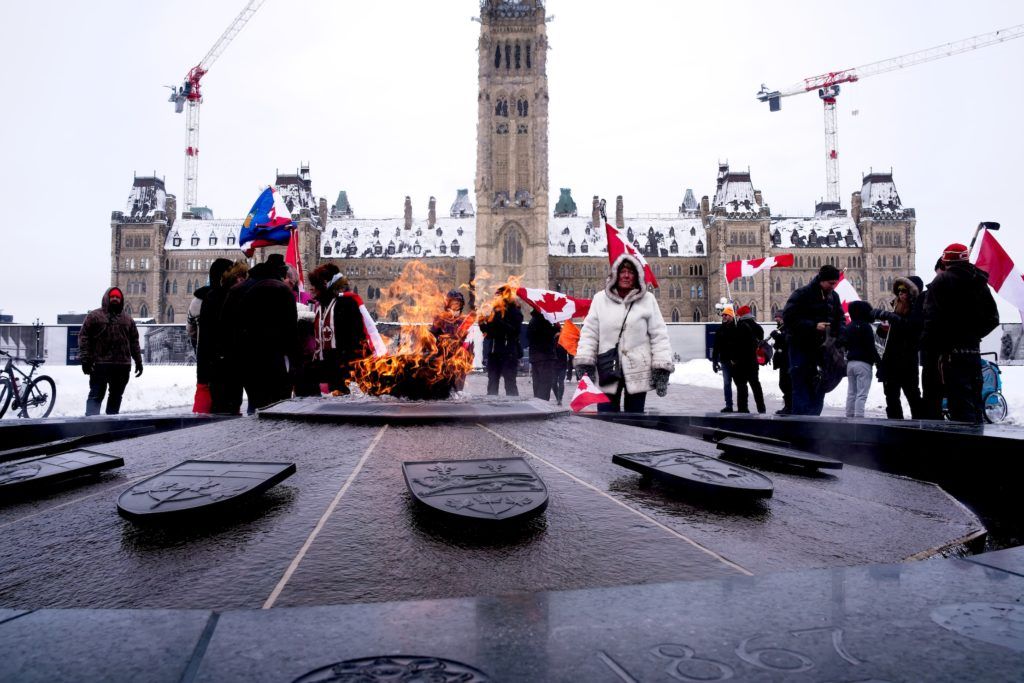 The attack on congregants at the Dar Al-Tawheed Islamic Centre is incredibly disturbing. I strongly condemn this violence – which has no place in Canada – and I’m keeping the community in my thoughts today. I also want to applaud the courage of those who were there this morning.

(It’s always too early to speculate on the nature of the motivations when it isn’t supportive of the narrative. Remember the school girl who claimed an “Asian” cut her hijab on the way to school? CBC had a crew there in 20 minutes and Trudeau condemned the “white supremacist racist nature” of the event within hours. And of course the whole thing was a hoax. Never happened. She was probably coached to say, “Caucasian” and only remembered “Asian”.)

A man is facing several charges after police say worshippers at a mosque in Mississauga, Ont., were attacked with bear spray in what authorities believe was a “hate-motivated incident.”

Someone walked into the Dar Al-Tawheed Islamic Centre, near McAdam Road and Matheson Boulevard East, early Saturday and discharged bear spray toward people while brandishing a hatchet, according to Peel Regional Police. Some members of the mosque tackled and subdued a suspect.

Mohammad Moiz Omar, 24, was charged with assault with a weapon, administering a noxious substance with intent to endanger life or cause bodily harm, possession of a weapon for a dangerous purpose, uttering a threat to cause death or bodily harm, carrying a concealed weapon and mischief to religious property.

Interesting name for an Islamophobic white supremacist. Video of arrest:

Update on Investigation that Occurred at Mississauga Mosque

(They charged him with a lot of things. But what did they NOT charge him with? Please post in comments.)

Compelling testimony. This is why I stand against the governments’ mandates.