1. This is wonderfully consistent with other groups they have on the UN Human Rights panel like Iran and Saudi Arabia

No joke: #China joins U.N. Human Rights Council panel, where it will help select the U.N.'s next world monitors on freedom of speech, enforced disappearances & arbitrary detention—and on health. That's like making a pyromaniac into the town fire chief. https://t.co/DqFY90rd6I

2. And in order for them to continue doing such a wonderful job as they do now, they want all nations to be tithed to them at least to the tune of 10%.

Measures to cope with coronavirus impacts

•    Global actions must include a stimulus package reaching double-digit percentage points of the world’s GDP, with explicit actions to boost the economies of developing countries.•    Regional mobilization must examine impacts, monetary coordination, fiscal and social measures, while engaging with private financial sector to support businesses and addressing structural challenges.

•    National solidarity needs to prioritize social cohesion and provide fiscal stimulus for the most vulnerable along with support to small- and medium-sized enterprises, decent work and education.

And for anyone who has forgotten, or has not yet seen this, here is the Secretary General of the UN explaining how its critical that all people of the world lose any freedom of speech that contradicts the Marxist narrative:

There is a video of this same Marxist explaining how the UN has to replace self governance for our own sake of course. But it’s long. Perhaps a day must be taken to dissect it and upload it with the proper references.

The whole video is below. It is just under 16 minutes.

Remember when nations were governed by grown-ups who actually set policy based on what works and the actual interests of its populations? They sounded like this:

Video: "Why is the U.N. defining Judaism as a war crime?" https://t.co/qvz0kuY8Ms via @unwatch

UN is an Anti-USA, Anti-Christian, Anti-Jewish Islamic Supremist Hate Group that has WATCHED & SUPPORTED the extermination of Jews & Christians throughout the World…

And, after this, Harvey Weinstein as UN ambassador for women's rights… https://t.co/pmKa7yID7v

An original translation by Oz-Rita with much thanks!

Embarrassment among diplomats, fear and anger among NGOs. The Saudis want to chair the Council for Human Rights. It all began with a rumor that has spread and reached the corridors of the Palais des Nations. Saudi Arabia covets the presidency of the Council for Human Rights impossible — unimaginable. However, this rumor is no longer a rumor. Faisal bin Hassan Trad, the Permanent Representative of Saudi Arabia to the United Nations, in Geneva since January 2014, is indeed campaigning in the Asian group to be its candidate for the renewal, which will take place by the end of the year.

Currently, the Council is chaired by the German Joachim Ruecker, whose qualities and commitment are unanimously lauded. Before him, it was an African, the Gabonese Nganella Baudelaire, who was not well-remembered among the NGOs, who were frustrated by his year as president.

The rotation rule requires that the next president of the Council of Human Rights come from the Asian group comprised of thirteen countries (Saudi Arabia, Bangladesh, China, UAE, India, Indonesia, Japan, Kazakhstan, Maldives, Pakistan, Republic of Korea, Qatar and Vietnam). Faisal bin Hassan Trad has a very good chance, and the battle promises to be close. The Europeans will all try to dissuade members of the Asia Group from this choice, considered in advance as disastrous for the IMAGE of the Council for Human Rights. [emphasis added]

Arm-twisting by the Saudis

Saudi Arabia is twisting the arms of these other countries to be designated. If they succeed, it will be a disaster for the Council of Human Rights. “This could send us back to the worst times of the former commission who had sunk into disrepute,” says a Western diplomat on condition of anonymity. END_OF_DOCUMENT_TOKEN_TO_BE_REPLACED

Add to the video above, this analysis by Krauthammer on America’s surreal intervention on Israel’s Gaza conflict.

Hey does anyone know what the UN resolution on the actual successful genocide of non-Muslims that was accomplished recently in the new state of The Tard Reich (AKA the Islamic State or, ‘The Caliphate’) by ISIL? Anyone? It must have been very harshly worded indeed!

Article and information compiled by Carpe Diem with much thanks 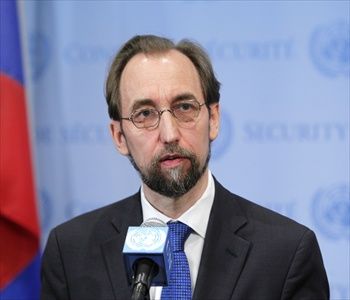 “Prince Zeid’s work on sexual violence and his leadership on the international criminal court give a good foundation for this new role,” said Peggy Hicks [1], global advocacy director at Human Rights Watch.

Hicks continued: “As states in his region silence civil society and crush peaceful protests, the real test for Prince Zeid will be his willingness to stand up to abusive governments and speak out for those facing injustice and human rights violations worldwide.”

In his speech to the United Nations Al-Hussein said:

“I highly appreciate the confidence you are putting in me through nominating me to this position. Specially that I am going to be the first High Commissioner from the Asian Continent and from the Muslim and Arab Worlds. Needless to say, that this reflects the commitment of the international community towards this important dossier and this commitment to push it forward in this continent, as well as in other regions of the world.”

I suggest: If he started at his home country Jordan, Al Hussein would be busy for the next couple of years, since Jordan criminalizes speech that is critical of the king, government officials and institutions, Islam, as well as speech deemed defamatory to other persons.

Marriages between Muslim women and non-Muslims are not recognized. A non-Muslim mother forfeits her custodial rights after the child reaches seven years old.

Officials said the 25-year old man was from the Central Asian nation of Tajikistan and had previously been deported, but that he had obtained forged documents and returned to Russia.

Grove City, PA –-(Ammoland.com)- The American armed forces are in a death spiral.

President Obama’s administration seems to be at war with its military leadership. In the past five years, Obama has sacked more senior officers than all other presidents combined. It wasn’t until the last 60 years that the United States was considered a top military power. Today, the American military is on the verge of becoming weaker than it was in 1939 when Hitler started his European rampage and Japan pushed its aggression into Asia.

(ANSAmed) – DUBAI, NOVEMBER 14 – After resolving the age-old paradox of women’s lingerie shops run and worked in by men only, Saudi Arabia is now strictly following its new policy of ”feminization”: women’s clothing and lingerie shops will from now on have to be run exclusively by women.

The terrorists who attacked the Benghazi consulate last year knew the location of the safe room where Ambassador Chris Stevens and his security team sought shelter, according to a congressman who spoke for 90 minutes with the diplomatic security agent severely injured in the assault.