Leading Israeli physicians and scientists in an open letter to @JustinTrudeau ??: 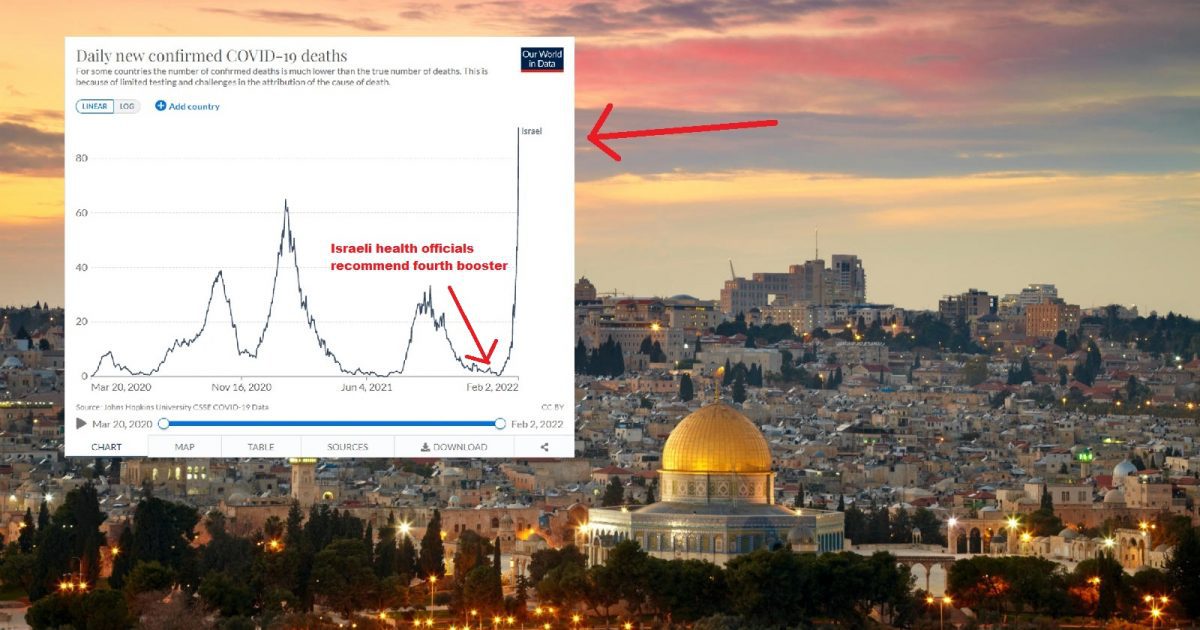 Israel, which has seen cases and deaths skyrocket, should be the canary in the coal mine for the rest of the world.

Israel is experiencing an unprecedented wave of new coronavirus cases and fatalities weeks after officials recommended a fourth coronavirus “vaccine” booster. The same country that was hailed by the then-lead Pfizer scientist as a “laboratory” is now ignored by mandate-hungry authoritarians who dominate the legacy media.

One year ago today, an article about Israel’s coronavirus response at “Our World in Data,” gushed that the country “has conducted the fastest campaign to vaccinate its population against COVID-19 so far.” Today, “About 95 percent of adults over 50 are vaccinated,” reveals journalist Alex Berenson. “About 85 percent have received a booster,” he continues. 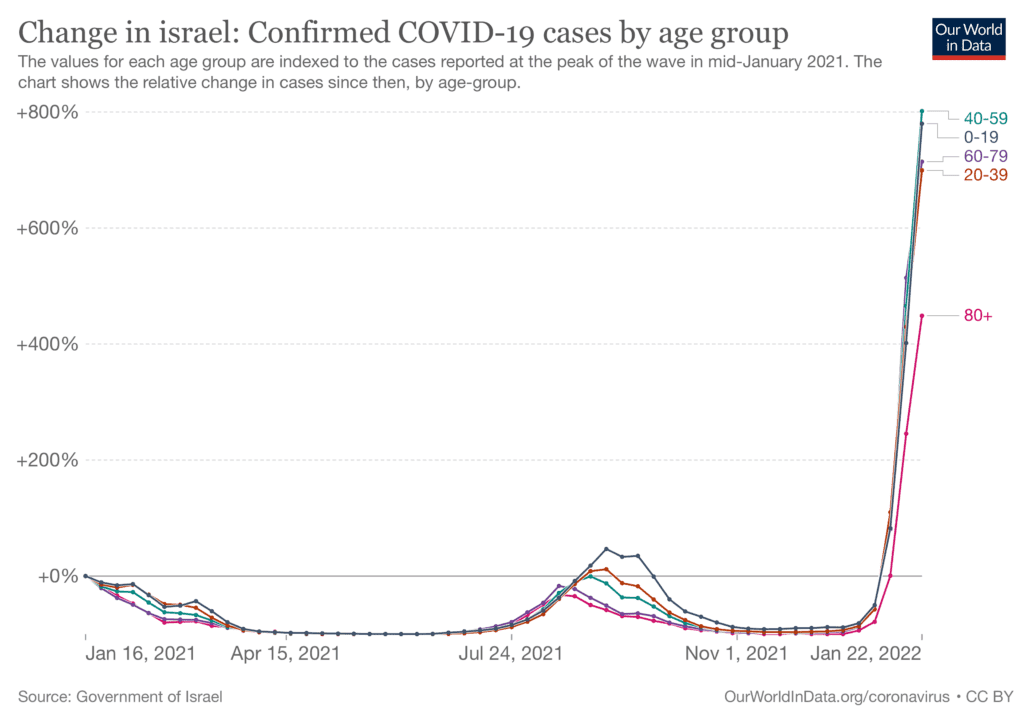 Are Israeli hospitals really overloaded with unvaccinated COVID patients? According to Prof. Yaakov Jerris, director of Ichilov Hospital’s coronavirus ward, the situation is completely opposite.

Jerris also revealed some of the confusion in reporting cases. Speaking at a cabinet meeting on Sunday, he told ministers, “Defining a serious patient is problematic. For example, a patient with a chronic lung disease always had a low level of oxygen, but now he has a positive coronavirus test result which technically makes him a ‘serious coronavirus patient,’ but that’s not accurate. The patient is only in a difficult condition because he has a serious underlying illness.”

And the tale of the tape:

Please go to RAIR for details, statistics and related materials to this stunning interview. Well only stunning if you still think the mRNA shots are safe and effective and are in some way, vaccines.

More on this to come.

Thank you Rachel L for finding this for us.

And getting vaccinated if you have natural immunity appears basically useless.

mRNA vaccine protection from Covid is far weaker than natural immunity and declines very fast, according to a new study of almost 6 million people in Israel.

In fact, people who had already had Covid once had better protection from the virus more than a year later than people who had been vaccinated only three months before.

The gap was even larger in cases of severe infection.

The difference did not result from gaps in age between vaccinated and recovered people. People over 60 benefitted even more from natural immunity relative to vaccination than did younger people.

Please click through to RAIR foundation for this well presented story of the faces and stories we are denied through those agencies, such as the media and government, that were created for our betterment, security and protection, and now appear to be enemies of the people.

Below is a video we subtitled sometime ago, and I don’t believe we posted at Vlad before, because the implications are too serious to present in case it isn’t true. But given the things we know are true that have appeared subsequent to this video, it seems more irresponsible not to present it and trust that you all can decide for yourselves if this is likely or is some kind of horror show made up by an enemy of Israel. And there are certainly indicators that this is could be the case.

But those same indicators could also be the rational feelings of a mother in this woman’s position.

The WHO after all, wants conversations about mandatory vaccinations world wide.

Since we are inventing statistics that appear to be the opposite of the same government’s official statistics which show that the more vaccinated the region the HIGHER the Covid rate, hospitalization, ICU and death rates are, I have another one for him.

And since the UN is made up of entirely those kinds of petty-tyrants, I suggest it be dismantled and all its laws and regulations be made far subservient to national and federal constitutions.

After all, it isn’t like Islamic sharia states obey UN diktats. In fact the opposite is closer to the truth. The UN obeys sharia diktats.

Dr. Boaz Lev, Head of Israel Management Team of Epidemics (MTE) – unaware of the Vaers deaths reports?
Mind the body language when confronted with truthful facts.
This is a snippet from the discussion held this week at the Knesset (Parliament) about vaxxing kids (5-11 yo). pic.twitter.com/ovbuUpKx9g

We had an Israeli translator check this as the content is too important to post without solid verification. She said it was perfect and an excellent translation.
I’m sorry.

The film, The Testimonies Project, is her initiative.

And then there is this one:

In this most heartbreaking video, a woman who explains she is the mother of a young recruit in the Israeli military, is awakened in the middle of the night to be force injected by a group of people, one of whom is high ranking.

The group will not even allow her a phone call telling her, “you have no right to make a  call right now.”
This video is important, and it speaks to the feeling so many of us have that there is something much bigger and seemingly more sinister going on than what we are being told. But this mother’s proposed solution would have the same result as the greatest fear from the vaccines.
Should all parents forbid their children from entering the Army, various Islamic and leftist militant groups would see Israel obliterated in days. This is just a fact. As its been stated for years now, and famously stated by Israeli PM, Golda Meir:
“If the Muslims were to lay down their arms there would be peace. If the Israelis where to lay down arms there would be no Israel.”
So perhaps it may have been more prudent if this rightfully distressed mom had said something more like, UNTIL this program is ended and there is perfect transparency on the mRNA injection program, and until soldiers have a right to refuse the shot and these horrifying psychological tactics are stopped, then there must be a general strike by the Army. Or perhaps no parents should send their children to the Army till those conditions are met.

And given that we are being fed a pack of lies from all authority everywhere, its difficult to reflexivly claim this is not true. Especially as the Israeli government has not denied it. Quite possibly to avoid a cascade of similar claims had they done so.

On yesterday's news – same claim:
2 dosed vaxxed are the ones getting sick.https://t.co/LDAEw24w5f

It’s wrong in one way though. Hospitalizations and deaths are much higher now than last year when there was no vaccines and its evident in countries where they have the highest vaxx rate. Israel and Singapore. It begins to look like this mRNA stuff trashes your natural immunity, not just to Covid, but to everything from shingles to cancer.

We are subtitling the hot mic videos in English now. Meanwhile, here is what we have on this story:

Imposing “green pass” rules on certain venues is needed only to pressure members of the public to get vaccinated, and not for medical reasons, Israeli Health Minister Nitzan Horowitz said on Sunday, ahead of the weekly Cabinet meeting.

Horowitz was caught on a hot mic telling this to Interior Minister Ayelet Shaked, who was also unaware that the conversation was being taped and would be broadcast on Channel 12 News.

In response to Shaked’s suggestion that the “green pass” could be removed as a requirement for outdoor seating at restaurants, Horowitz said: “For swimming pools, too, not just in restaurants.”

“Epidemiologically, it’s true,” said Horowitz, adding, “The thing is, I’m telling you, our problem is people who don’t get vaccinated. We need [to influence] them a bit; otherwise, we won’t get out of this [pandemic situation].”

Currently, he said, “there is a kind of universality to the ‘green pass’ system, other than at malls, where I think it should be imposed, [because] now it’s clear that it applies nowhere.”

Times of Israel: Health minister on hot mic: Some COVID restrictions are to incentivize vaccines

Several ministers were overheard prior to a cabinet meeting on Sunday saying that some coronavirus-related restrictions are only aimed at incentivizing vaccination, rather than driving down morbidity, while lamenting that the unvaccinated are taking up hospital beds.

The “Green Pass” is a document held by those who are vaccinated or have recovered from COVID, and is required to access most indoor public places, as well as crowded outdoor attractions.

“In pools, too, not just in restaurants. Epidemiologically it’s correct,” Horowitz responded to Shaked, noting that the Green Pass is not particularly needed at outdoor gatherings.

RELATED: Israel, utterly failing to learn the lessons of WW2 and Joseph Mengele, set up a deal with German pharma megacorp Pfizer, to become a testing ground for the world

Video of hot-mic with Israeli minister to follow soon. Here is the tweet its from for now.

NEW – Israeli Ministry of Health (right) recorded saying to the Minister of Interior (left) "there is no medical or epidemiological justification for the Covid passport, it is only intended to pressure the unvaccinated to vaccinate".pic.twitter.com/c3oAOpZdEE

Dr. Bostom tells me this guy is solid and just posts official data

According to these tables, it seems like in the first five months of 2021 the increase was even higher than 25%.
His study also notes that according to the Bureau of Statistics – mortality rates among young people decreased simultaneously after the decrease in vaccination rates. pic.twitter.com/eNS1q4jbaR