Tucker continues to chart and document the destruction of the US as a polity by flooding the nation with migrants, who curiously do not seem to be subject to any of the laws Citizens are, either normal laws, or Covid regs. No vaxx, no passports of any kind. Much more importantly, Tucker is now out in front talking about the obvious Great Replacement policy of extermination of White European people as dominant in the US, but frankly in any location at all. Eastern Europe pay close attention.

This is actually a great episode. Well worth the time to watch. The military commander who speaks out against the mandatory vaxx commits career suicide to state obvious truths, obvious ones, but which are now verboten to utter. That is around the middle.

The government of the United States is at war with the institutions of state, and the rights of the people. 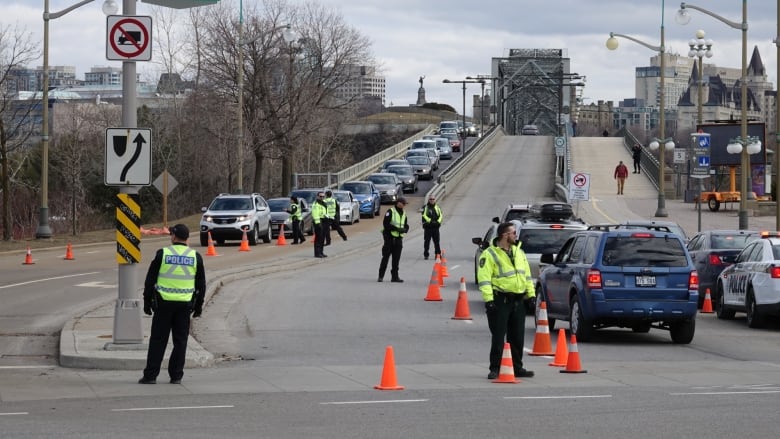 Gatineau police set up checkpoints on interprovincial bridges and other roadways Wednesday in an unprecedented effort to enforce the province’s new ban on non-essential travel into western Quebec.

The ban started at noon and includes visitors crossing into Quebec from Ontario.

By Wednesday afternoon, traffic was lined up near crossings between the two provinces, including the Champlain and Alexandra bridges.

Police are asking drivers and passengers about the purpose of their trip to assess whether or not it’s essential, a news release from Gatineau police said. Essential trips include travel for essential work, medical appointments or for humanitarian reasons.

Gatineau police say checkpoints are currently set up at:

Tim Poole on the collapse of civilization in Italy

One of the videos on Italy and the new chaotic order

An original translation by MissPiggy with much thanks

(The body of the Hessian finance minister was so badly mutilated on the tracks, that there was difficulty identifying the body)

We are currently experiencing what is perhaps the greatest crisis since the foundation of Federal Republic of Germany. The events are coming thick and fast, and emergency laws are being passed to mitigate the consequences of the pandemic for our economy.

Among the many news reports, one particularly shocked me: Yesterday Thomas Schäfer took his own life.

The Hessian Finance Minister was known for being a man of action. He was regarded as level-headed and reliable. He was an experienced politician who took his responsibilities very seriously. Now, in the Corona crisis, Thomas Schäfer played a central role in the state government as a crisis manager.

This man has now taken his own life.

In a farewell letter he explained the reasons for his suicide. He was desperate and saw no way out. He could no longer bear the current situation in Germany. The concern that he would not be able to meet the expectations of the population had crushed him, reported Prime Minister Bouffier. (1)

What’s happening? Never before in the history of the Federal Republic of Germany has a minister ended his life because he cannot bear the responsibility. That shows how dramatic the situation is.

Thomas Schäfer leaves behind a wife and two children who now have to cope with this terrible loss. My deepest sympathy goes to them.

We must look ahead and tackle the problems. That is why I have added a small quote from the “Glass Bead Game” by Hermann Hesse to this funeral announcement. Let us use the crisis to rise above ourselves.

God doesn’t send desperation to kill us. He sends it to bring new life into us.

In the context of what is happening on the Greek, Bulgarian and Turkish border right now, this 2018 Israeli documentary on the Muslim Brotherhood in Europe has become of major importance. Again.

This episode is on the influence the Brotherhood has in Turkey, where the MB’s spiritual head, Al Qawadari, has declared Erdogan the one true Claiph, is manipulating Western nations via mass Islamic migration.

This is really worth the time to watch. Thanks again to R. L. for the massive effort in translating this video for us all.

1. It seems to be met with some resistance:

It #Grecia closes its borders, deploys army, helicopters and warships to defend Europe from the illegal invaders #risorseINPS(about 25 thousand per hour) sent by the Turkish regime of the terrorist #Erdogan. #RadioSavana ????

2. Greek Citizens have had enough

Hellas, Lesvos Island.
Armed man started shooting in the air outside of a illegal refugees camp while shouting: "We are Men, we fight wars & leave women & children out of them, unlike you!!!" & threatening to kill all immigrants if they don't go backhttps://t.co/M7GXNLlNxc pic.twitter.com/3lB5g3qA8f

(This is why the public MUST be armed. When only the guy at the top controls all use of force, you can topple a country just by subverting the guy at the top. Clearly a few Greeks decided not to count on corrupt or communist EU leadership)

Turkey's state-owned railway company TCDD transports refugees to border province Edirne near #Greece and #Bulgaria while the Turkish police escort cars lead the way for them to walk all the way to border gates from downtown. pic.twitter.com/4yfZYOQBBg

4. Migrants enjoy a little light Greek pyrotechnic display as they make their last dash into Europe

NICOSIA, Cyprus — Cyprus’ interior minister on Friday accused Turkey of deliberately channeling migrants for months to the ethnically-divided island’s Greek Cypriot south to change the composition of its population.

Nicos Nouris said up to two-thirds of arriving migrants reach the internationally-recognized south through the breakaway Turkish Cypriot north that’s recognized only by Turkey.

“We maintain that there is a very specific purpose and aim, which is to alter the island’s demographic character, and clearly we cannot continue to accept (migrants) in such numbers,” Nouris told The Associated Press.

The Cypriot government sees this as a long-running issue. Unlike fellow European Union-member Greece, Cyprus did not see a wave of migrants trying to enter Friday after Turkey said it would no longer hold them back following its military losses in Syria.

6. European Union’s Voice of the COMINTERN, Euronews spins the invasion of Greece by everyone Erdogan could get to go there.

7. Not speaking Greek, its hard to be sure. But I am guessing these are not Greek Nationals cutting the border fence to get out.

8. You have to go to 9 minutes on this video to see the border guards in the woods facing some fires and supposedly Turkey and the invasion.

(I guess the rule is, you can only shoot at massive amounts of invaders to your nation if they are wearing Hugo Boss. The genius that Soros and his cabal of the COMINTERN worked out, was making sure that all the actions would be viewed by target nations as issues of law and order and not military or intelligence. So all the actions would be designed to so significantly overwhelm law enforcement that the only thing police can do is interfere with citizens actually trying to enforce the law.

What may be interesting here is that Greek citizens may also be overwhelming law enforcement. Police may feel its better to pitch in with the people they are supposed to be protecting for a change. We should know soon.)

9. Anyone speak Greek? This may be worth listening to.

10. RELATED: One of Europe’s ONLY sane national leaders has made the sane decision after seeing what is going on and after Viktor Orban spoke with Erdogan:

MOSCOW (Sputnik) – Earlier in the week, Erdogan said that Turkey had opened its border with the European Union to Syrian refugees as it had not received promised assistance to deal with the refugees within its borders.

The Hungarian authorities had decided to strengthen its border security following a phone conversation between Hungarian Prime Minister Viktor Orban and Turkish President Recep Tayyip Erdogan, the government said on Saturday. On Friday, Orban and Erdogan discussed the situation in Syria as well as the migrant crisis.

11. Just breaking in and climbing fences and showing utter and total contempt for Greek right of sovereignty

12. Let’s not forget the other invasion. Turkey militarily invades Syria, creates refugees one supposes, and then sends them into Europe. The gift that keeps on giving.

Thank you M., Wrath of Khan, Richard and all who sent in materials that went to making this post.

There is some discussion about the age of the students at this school based on the terms used. It seems that it could be anywhere from Kindergarten to grade 9. Anyone from Spain reading this site please let us know in the comments.

Reader’s may need to click the dial and select “Source” under quality to see the poster as its not filmed very well and D.tube defaults to 480.