Some weeks ago, Robert Malone tweeted out that this one graph, which was part of the AfD presentation, was all anyone needed to know about the vaxx Gene Therapy program. Below is the entire press conference, which was attended by NOT ONE MEMBER of the official German MSM.

The Most Important Dataset of the Pandemic Was Just Released https://t.co/0HdlCzfpBE

Please read the details over at RAIR Foundation.com.

Video one of five

For a thorough understanding of the issue, please watch all five. The money quotes are in parts IV and V. But all of this is worth watching for more than one reason.

At least there is a few members of the European Parliament that know what is going on and aren’t afraid to speak about it. How effective they are is another matter.

Please go to RAIR Foundation for the details on this speech.

Please see the details of who and where at RAIR Foundation.com

One of our favorite AfD politicians, in fact one of our favorite politicians anywhere, sets the record straight on the mass shooting in Hanau, which Merkel and all the leftist politicians disingenuously used to try and demonize the AfD as somehow responsible. Dr. Curio makes short shrift of these classically communist leaders and their deceptions with basic solid facts about the killer and what his real motive, crazy as it is, actually was.

This is a wonderful piece of counter-narrative journalism where some young Jewish-German people decided to form an official branch of the AfD party. The purpose is to help support the facts of who and what the AfD represent, as well as the deceptions and subterfuge of Merkel’s CDU as well as Greens and other more genuinely antisemitic parties, who are working triple shifts to create a  Genocide by Proxy.

Thank you Miss Piggy for the staggering amount of work that must have gone into this translation. Also if you want to read background and details of all people in this video, please visit RAIR Foundation’s article on this video here.

We are used to seeing ANTIFA and fellow travellers calling Asians like Andy Ngo or African Americans like Candice Owens being called “White Supremacists” because they oppose the often blatantly communist overthrow of Western Civilization.

The German CDU government also used its own form of deceptions and Repressive Tolerance © but generally don’t go for direct Nazi calling except to slander the AfD. One of the few non-totalitarian parties in the Bundestag.

Now however there is a major MSM push to slander the entire city of Dresden, formerly in East Germany, as a city facing a “nazi emergency”.

Long term followers of this site may remember an organization representing classical liberalism, individual rights and freedoms that was strongest in Dresden and spread around the world and still exists in Toronto and other cities, called “PEGIDA”.

This group would march in Dresden by the thousands weekly to oppose Merkel and her program to islamify Germany and deconstruct Germany (and Europe) as a people and a culture(s) altogether.

But the German government does what Western governments have all learned to do. Demonize, criminalize and deconstruct all groups who wish to preserve their cultural heritage and established legal principles, most notably equality before the law.

The UK did it with the EDL, and the Australian Defense League was shuttered before it even took off. Other nations who attempted a defence league suffered the same fate. It didn’t matter that government agencies or powerful groups 1 step removed from government, like unions connected to left wing parties and governments had been caught infiltrating these groups in order to give them a bad name. What mattered was results uber alles.

And now it seems that Dresden’s resistance to its own destruction means the German government-media complex is ready to sacrifice the whole city on a giant gambit. The prize of course, is the destruction of Germany, so its a win win for them. They succeed in destroying PEGIDA and all like minded who wish to remain German, or the city is crushed by various isolations because it is rife with “Nazis”.

More and more media will publish this story. It makes for a sexy headline. So one can expect it to go viral in the MSM. How can you expect journalists who have already proven to be fully corrupted in terms of integrity and loyalty to the truth, but can often be shown to be fully dedicated to spinning and manipulating truth to twist all thought to the left one detent at a time to resist a whole city declared a “Nazi Emergency” just because its pure bullshit?

Thank you MissPiggy for the translation and this graph that might also explain a lot. It shows election results in the region in 2014 and 2019. 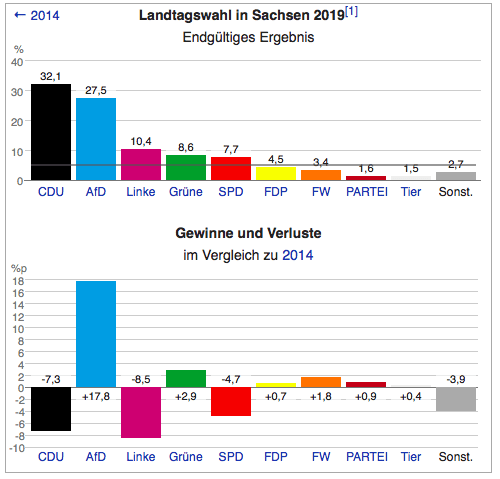 This is an important short video by AfD co-chair, Beatrix Von Storch.

Leftist parties across Europe are consciously practicing a genocide of the Jewish people by proxy with mass importation of muslims, and then full application of ‘Repressive Tolerance’ so that no laws will be enforced against incitement against Jews no matter what it is, while the rest of us dare not even criticize our various immigration policies, all of which seem to stem from the UN’s migration Pact of earlier this year.

For evidence of this one needs look no further than Jeremy Corbyn or Justin Trudeau. Angela Merkel is too obvious to even mention, although I would say that Obama was racing her for the gold.

The AfD however is the only party which has policies that would protect Jewish people in Germany, along with all other citizens by re-enforcing the more classical immigration practices along with equal application of (non-Hegelian) laws.

The response is predictable. Leftist media, some of whom have a history of being hard core communist activists (we have busted several before on this site) along with the Merkel government (that increasingly becomes indistinguishable from the DDR from whence Merkel hatched), accuse the AfD of being “Nazis” and the usual projections we are getting used to from the left.

They even have pet ‘Jewish’ groups who. come in to the Bundestag now and again and accuse the AfD of setting up a new Holocaust.

For more on this please check out RAIR Foundation’s post which should be published later today. Will update with link as soon as it is.

If a conservative had done something like this at a Leftist party event, we know what would happen to them.