Melissa Fleming, of the United Nations Department of Global Communications team, says that through their partnership with Google, they have been able to eliminate any opposing viewpoints from coming up when people search ‘climate change’ through the worlds most popular search engine.

? World Economic Forum partnered with Google to determine what results are shown.

WEF Member: “We own the science.” pic.twitter.com/nWIRhTqjq9

The Wiki on Melissa Fleming

This screen grab video is by our Hungarian correspondent who went looking for the fraud that is rumoured to be the approval of the mRNA shots by the FDA on Monday. I say fraud, because of course it is impossible for them to approve a new vaccine in this short a time, let alone a whole new technology, according to the FDA’s own standards of safety. Below, Kalloi’s explanation of the video:

As a sidenote to the latest post by VladTepesblog, I am sending you this screen record video I have made. The background story is that I was searching for info about the coming FDA approval of the jabs in the US recently, and to my surprise the search results I got was an amazingly long list with THE SAME headlines and summary — on different news sites. Not similar, the same. So I made this video to show how the impressive list of IDENTICAL headlines is slowly scrolling down for 90 seconds. No way there is no coordination behind this: it would be Molecularly Impossible!

The importance of this particular propaganda about the FDA approval is most probably that it psychologically prepares the people for the mandatory jabs that will come soon, right after the FDA approval. The content of the AP article at the end of the video supports this theory. And also, the reason I started the screen-recorded search in the first place was that an article of a Hungarian globalist media outlet, Index_hu enthusiastically detailed how happy Fauci will be when the FDA approval is done and he will finally be able to mandate the jabs at least informally.

At the end of the day, it appears that the FDA, like nearly everything else now, has been corrupted to a purpose. Perhaps in order to bypass laws preventing making it mandatory unless it has that approval, or to overcome arguments by the “hesitant” who use the lack of FDA approval as a reason for not getting injected with it. Probably both.

I was searching for the website for America’s Front Line Doctors for a friend and got this result from Google: 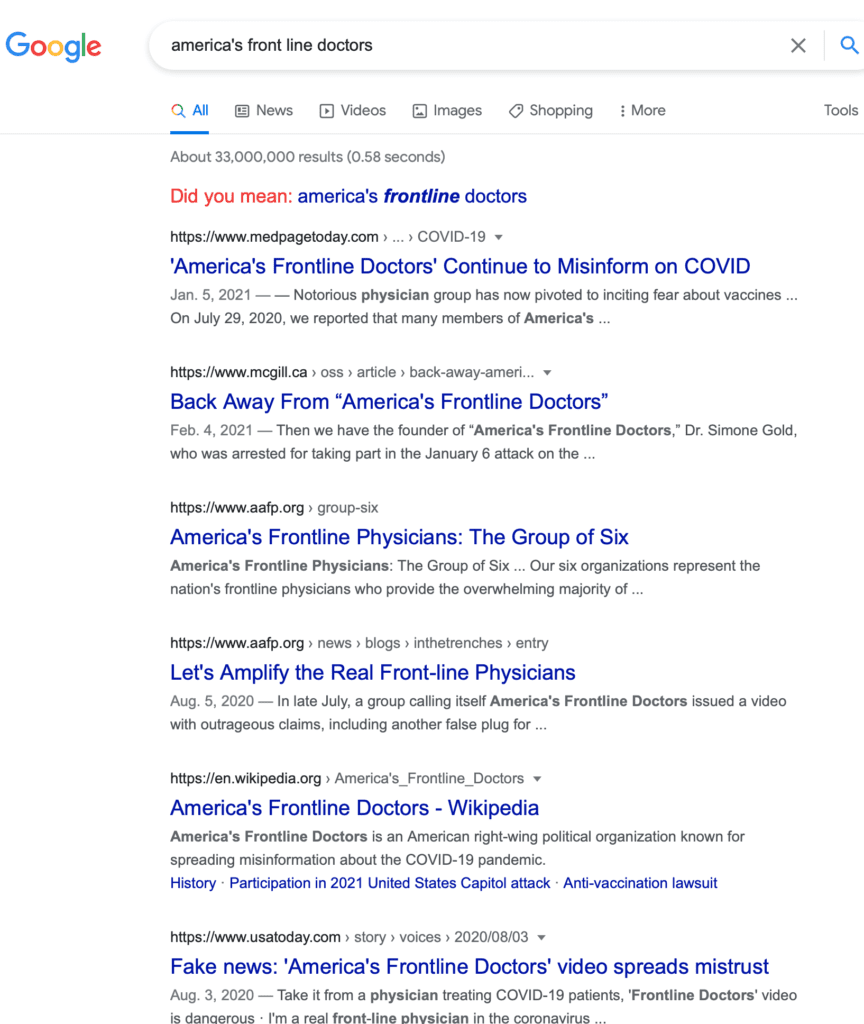 A stunning amount of links that diminished the group I was looking for, and none of them brought me to their material. Just attacks on them and competition to them from the other side.

Then I tried Duckduck go: 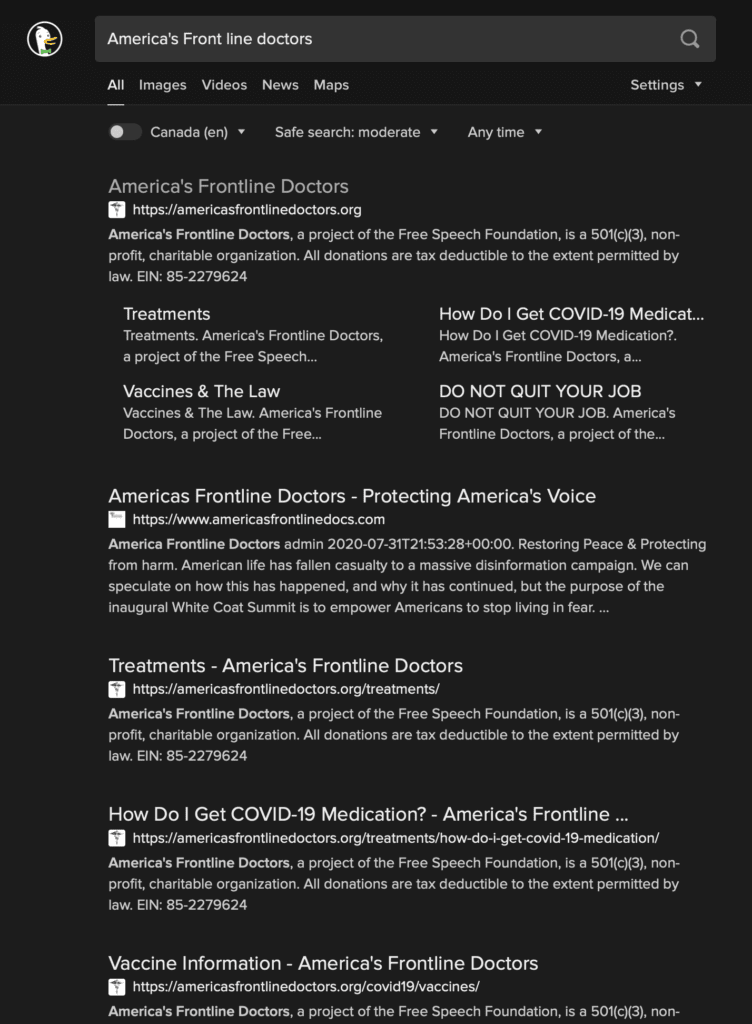 Every result was what I was actually looking for and related hits.

It is stunning that Google still exists as a search engine. At this point, Google is to finding what you want online what CBC, CNN, or BBC is to news.

This is a LOT to unpack. There is a great deal of information, and if even half of it is true, it explains nearly all the gaps in the entire mystery around the facts of the way Covid, treatments and the injections are being forced on us. Just one example, and its near the start, is how Google is heavily invested in multiple aspects of the technology, which is why they would not permit even peer reviewed materials on Ivermectin or HCQ to be posted on Youtube.

In fact it explains why they worked so hard to get Trump out of office since we now know that he ordered the US civil service to make HCQ available to all easily to end this stupid pandemic. And we now know it would have.

But no worries, there is a great deal of blame to go around. Settle in, maybe get a drink and or a pizza and watch this. I removed the German translation but otherwise its the complete interview.

Its time that certain key people at Google and Facebook got waterboarded for a month till we know what they have been doing to us.

This is a worthwhile thread. And any reader of Vlad’s for over a few months will recognize many of these events, which helps put us at ease about the veracity of his other observations.

I don’t know how to post an entire thread here, but click through to this one and you should be able to see all, 18 posts in this thread.

1. Something needs to be done about Google. Its search engine has 92% market share. Google is aware of its massive power & seeks to exploit it to the max. It has become an enemy to freedom.

Below, I'll briefly summarize its shenanigans, & then discuss what must be done. https://t.co/jXLQ4XIi9t pic.twitter.com/oi4ntcYpFb

If power corrupts, and absolute power corrupts absolutely, we need a third order of magnitude statement to describe what Google has become.

This article written years ago by an authority on the subject, details how it can be determined that Google does indeed slant its search results in contradiction to its own stated rules of operation.

In what may be the best indicator of the nature of this pandemic yet, a video with two prominent and experienced field doctors in California, that has been seen by many people and referred to by many authorities not locked into the Fauci paradigm, has been removed by Youtube. Not for any violation of any of their terms of service. Not hate speech, or any of the other excuses Youtube needs to secure the narrative at all.

Youtube in fact seems to be beyond the need for excuses. They just ban things that contradict what they need people to believe.

So this deserves extra attention. Even if they are wrong.

There is nothing so appealing about an opinion more than we are not allowed to hear it.

(Where liberalism is defined as all people are equal before the law, and have equal individual rights, and Marxism or ‘The Left’ is defined as arbitrary group rights based on victim status, or more often, whatever is worse for society at large, notice how in this article an Obama appointed judge told Google that they are free to treat different groups differently? We know for a fact they would have been up on charges had they done so not ranking groups as Neo-Marxists would expect them to. If Whites or Christians had more latitude than blacks or muslims for example)

“To suggest that PragerU’s content is obscene, violent, hate speech is an absolute insult to the intelligence of the American public and people like yourself, who are willing to enter the important political dialogue,” Peter Obstler, PragerU’s lead attorney, told reporters and others at a press conference Tuesday in Seattle.

U.S. District Judge Lucy Koh, appointed by President Barack Obama, dismissed the lawsuit in March, ruling that Google does not have to treat those who use its services equally.

The legal battle by the organization co-founded by commentator and talk radio host Dennis Prager began in October 2017. Prager University, known as PragerU, filed a lawsuit against Google after YouTube placed more than 100 of its videos in “restricted” mode, flagging them as “dangerous” or “derogatory,” according to a press release from PragerU.

2. Major riots, protests, against the ruling Indonesia by the residents of Papua New Guinea

Something weird about this. The language used is often very Neo-Marxist. What with the “racism” and all.

San Francisco Police, its bomb squad and the FBI surrounded the residence of Google whistleblower Zach Vorhies, just hours before he was scheduled to provide evidence to the Justice Department detailing how the tech giant has been manipulating its algorithms to promote an anti-Trump agenda and censor Conservatives on Google and YouTube.

Vorhies is a former senior Google software engineer, who on August 5th was in the process of delivering a Google laptop and internal documents to the Justice Department’s Antitrust division. But his whistle blowing efforts were stymied by police who stormed his neighborhood and locked down several blocks in an attempt to lure him from his San Francisco residence, at the request of Google executives.

What was Vorhies’ crime? Google executives told police that Vorhies was suicidal and a potential danger, Vorhies told True Pundit. The tech guru was red flagged by his former employer. According to news reports and witnesses, as well as video clips of the law enforcement operation from local TV news, police closed several blocks surrounding Vorhies’ Valencia Street residence.

The rest can be seen at True Pundit. This site has no clue what to make of any of this.

According to the Blacklist doc at 10:30, The Rebel.media is delisted from some google search results, as well as The Gateway Pundit, infowars and many more. 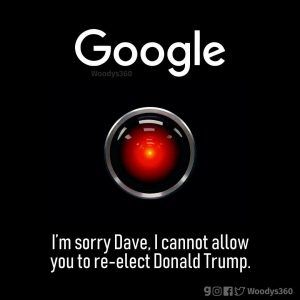 These guys are very good on all things China. Videos are very worth watching for those interested in the disposition and inner workings and geopolitics of China. It is as shocking in the same way that it is sticking that Youtube shadow banned Dennis Prager because his video on the 10 commandments mentions the word “murder”, that they also shadow ban China uncensored. To borrow a stylistic device of CU, that would be, shocking if you assume that Google and Youtube acts in accordance with the values and sense of fairness and reasonableness that they say they do, and that we want to believe they do.

Once you understand their real ethic and values, they become very predictable and the fact that CU is shadow banned becomes sort of satisfying to your understanding while nauseating as proof that Alphabet/Google/Youtube is in fact so evil, that at least, is a miniature spark of last-gasp integrity, they recently dropped their slogan of,”Don’t be evil”.