The rise in #Antisemitism should shake all of us. It's a virus we must fight. pic.twitter.com/ZdxYIieOZT

There is, among those of us who fight Islamic and leftist totalitarianism and global manifest destiny, a kind of acid test of acceptable affiliation. Its an easy one really. Those of us with whom we choose to affiliate must recognize Israel under the same set of criteria they would any other nation on Earth. This means they must not be antisemitic, as typically anti-Israel people apply an impossibly high standard to Israel in order to demonize and delegitimize it when it inevitably fails that impossible standard.

The most probable reason for doing so, is it is a Jewish and liberal state more or less based on a free market system in the same way the rest of Western states are more or less free market.

This makes it unacceptable to Muslims, who must rule the world by sharia and doubly so because their scripture commands the extermination of Jews and Israel as a Jewish state and Jews were the first to reject the founder of Islam, Mohammed,’s alleged divine right to rule.

It also makes it unacceptable to socialists/communists who initially had hoped for a secular communist state of Israel which would live in harmony with its Muslim neighbors. Of course this required them not to be Muslims but just some other kind of communist, but reality never stopped a communist from killing to create a Marxist utopia.

Here is a brilliant example of a true rational liberal from Australia. A new Senator named James Paterson. An excerpt from his maiden speech given on March 15 2016

Lets contrast that with this official US government map of the region:

Notice anything missing? Tiny Gaza is listed, but not the official, 6,000,000 people strong, world-leader in patents etc. state of Israel.

As time goes by, and more and more of those who fight on behalf of a free and classical civilization get frustrated and frightened, the tendency to blame the Jewish people for this problem, the one that Merkel and Obama and others can easily be seen to be the prime movers along with financiers such as George Soros etc. grows like a cancer.

Yes, there are Jewish leftists who follow multicultural policy like the useful idiots they are. Then you have truly pernicious Jewish activists such as Barbara Lerner Spectre, who truly is all that the antisemites claim the jews are, and has been referred to as “God’s gift to the Ku Klux Klan”.

But it must be understood that neither Babs Lerner nor George Soros are connected by anything actually Jewish other than ethnicity perhaps. And to blame their Jewishness for their actions would be identical to blaming the communist millions-of-killed by Mao Zedong on his being Chinese.

There is a mountain of Jewish activists working for freedom and Jeffersonian liberalism. They just don’t make a big deal out of their Jewish heritage as it shouldn’t matter. In fact its typically the leftists who form groups like “Jews against Trump” because they don’t have a real argument and stick to vectors of attack via ethnic identity for the sake of cultural Marxism. Just like feminist groups and Black Lives Matter etc. etc.

There is no scriptural basis for the destruction of Greek thought and English legal thought in Jewish history nor in any other component of Jewish doctrine. (I speak here of course, of real Jewish doctrine not forgeries or imputed texts written by historical Nazis of one stripe or another)

Here is one example of a liberal Jewish man fighting for all our rights to freedom. He is likely Jewish but only refers to his time proudly serving the United States in the armed services as his credentials and not what gene pool he happens to be from.

For every Babs Lerner, there are a thousand like Aaron Wiess in the video above.. How do I know? I work with dozens of them, fighting for all our rights to freedom of speech and all that entails. And it is my great honour to do so.

And this brings me to the thing about which, I want to apply a powerful spotlight.

For those that remember the attack by religious Muslims, probably from Pakistan’s ISI against India via the attacks in Bombay Nov. 2008, there was a notable aspect to it.

The terrorists, being in fact, terrorists, intended to do as spectacular an attack as they were able to do with the limited number of people and ordnance they could smuggle into India via light water craft. The bigger the attack, the more terror. But they chose to use a significant portion of those resources to go after a Chabad house at the other side of the city in order to kill Jews. This meant that the strategic objective had more than one component. Had they not done that, they may have been able to significantly increase the number of dead and amount of damage and terror caused.

The exact same thing for the attacks against Charlie Hebdo in Paris. Significant resources went into killing people at a delicatessen on the other side of Paris. Frankly most terrorist attacks in the West have a component of murdering Jewish people. So we can see where the dividing line is.

We have a historic and monumental speech by Hungarian Prime Minister, Victor Orban.

In it, he quite clearly states that importing antisemitism into Hungary (meaning Muslims who are ideologically obliged to it) is unacceptable.

Lets think about the strategic resources spent on such a statement in this speech.

Hungary has a political party, Jobbik, that are actual Nazis.

This is not a fringe party. They have seats in Parliament. They have influence and a following. For Orban to make this statement

“We shall not import to Hungary crime, terrorism, homophobia and synagogue-burning anti-Semitism.” (7 mins 31 seconds on video)

must be taken very seriously. He spent real political capital to say this in the exact same way that terrorist groups spent resources to do the opposite.

In this, Orban has established himself firmly as a true liberal in the Jeffersonian sense. He has earned our respect and passed the acid test at potentially great cost to himself. He could be much more popular and have a larger mandate if he went the other way perhaps,  or by just not saying that one line.

And so I put it to suicide-Jews out there who still rest on sanctimony and leftist feel-good politics and demonize what the left and leftist media tells you to demonize without thought and without research, you must support this man and all who think like him should you wish your children to enjoy sharing the oxygen in the atmosphere, and if you wish your grandchildren to see adulthood.

Your last chance, Children of Israel, to recognize who genuinely holds your basic interests at heart.

I suggest that the opportunity to support such as he is taken. 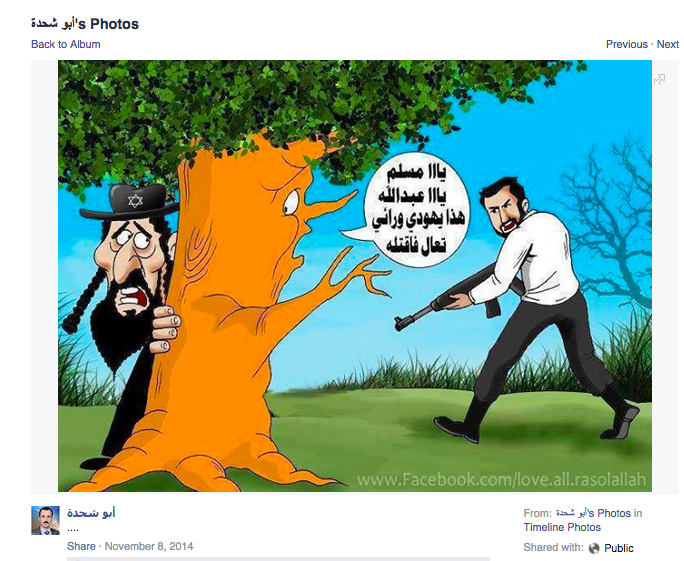 Above: UNRWA’s Mohammed Abu Staita posted this anti-Semitic cartoon on his Facebook page, openly identified with UNRWA, calling for Jews to be killed. Below: UNRWA spokesman Chris Gunness responds with denial and attacks on UN Watch. Belgian police have concluded an investigation into a vicious anti-Semitic assault at a cafe in Brussels, in which a European Union official physically attacked a female co-worker, while verbally abusing her as a “dirty Jewess.”

The assault, in full view of other restaurant patrons, occurred on the patio of the “Italiano” cafe near European Union headquarters in the city, Haaretz reports.

A 50-year old Italian woman – a department head at the European Council – saw a man at the cafe holding a metal plaque engraved with “Mussolini” and praising the World War II-era Italian fascist leader.

In comparison with Israel’s security borders, “the Berlin Wall is a toy” said the Bavarian politician in a nearly four minute video posted on YouTube. In comparison with Israel’s security borders, “the Berlin Wall is a toy” said the Bavarian politician in a nearly four minute video posted on YouTube in August. He spoke at a reportedly anti-Israel June event sponsored by the German Protestant Church.

Efraim Zuroff, the chief Nazi hunter of the Simon Wiesenthal Center and the director of its Jerusalem office, told The Jerusalem Post on Thursday, “It is obvious that Green MP Uwe Kekeritz learned nothing about the larger picture about Middle East politics and history during his visit to Israel.”

It appears that the usual leftist cossacks are responsible for attempting to frame the classical liberal, now called ‘Far Right’ by the media and purveyors of the Frankfurt narrative,parties and are in fact responsible for this week’s attack on multiple cemeteries in France.

Three assailants burned, robbed and beat the tourists at the Onda Azul hostel in Lago Puelo, in southern Argentina, between 1 a.m. and 4 a.m. Monday, the Argentine media reported. Police in the Chubut province are investigating.

“It was a terrifying moment, several hours of fear,” hostel owner Sergio Polak told the local media. “They shouted, ‘Go, f***ing Jews, you f***ing Jews are robbing us’ in the Patagonia region.

Israeli tourists have been the victims of a violent antisemitic attack in the southern Patagonia region of Argentina, which has led to the targeted hostel being closed down by its owners.

The attackers screamed “You shit Jews, you are trying to take over Patagonia,” said Yoav Pollac, the 38-year-old owner of Onda Azul in the town of Lago Puelo, where many young Israeli backpackers stay.

“They came in throwing stones, smashing windows. They chased after three cars in which some of our guests tried to escape and wrecked them. They injured me, my brother and my father, who is almost 70 years old,” Pollac said.

The attack comes amid a growing hate campaign against Israeli tourists, who are described as Israeli soldiers by antisemitic groups in Patagonia. Authorities are increasingly concerned about the appearance of posters calling for a boycott of “Israeli military tourism” in the region.

(I have replaced SUN’s embed code with a Youtube code because many people, even people with a DSL connection, cannot see the SUN embeds. I hope the good people at SUN can find a way to make their material easier to access as more and more people move away from TV)

The Jews are a peculiar people: things permitted to other nations are forbidden to the Jews.

Other nations drive out thousands, even millions of people, and there is no refugee problem. Russia did it, Poland and Czechoslovakia did it. Turkey threw out a million Greeks and Algeria a million Frenchman. Indonesia threw out heaven knows how many Chinese and no one says a word about refugees. But in the case of Israel displaced Arabs have become eternal refugees. Everyone insists that Israel must take back every single Arab.

H/T M and thank you Bear for the rapid translation

Please go to Breitbart and read the article, transcript of this video and comments.

(Thanks Ox AO for the better video)

Thank you Oz-Rita for all the work translating and sourcing these videos.