Remember this post from all the way from yesterday?

Most interestingly for this post, is this video done by RAIR Foundation about a genuine left wing violent revolutionary

He inserted himself with Trump supporters and was part of what looks like a false flag op to get GOP house members to not contest the Electoral college.

Well look who got released from jail already, even from the serious charge of, what are the Democrats and enemy propagandists calling it? Oh yeah. Insurrection.

Just ran into John Sullivan the suspected BLM activist that was amongst the protesters that stormed the Capitol and was arrested yesterday. He appears to have been released!

In a phone call he can be heard saying that “no he’s not being charged”. pic.twitter.com/ZM11JpYk3J

Watch the thread about his adventures in DC here.

Does anyone believe there will be less violence in America if Donald Trump is reelected?

UPDATE: From what I have been able to tell, and this is not certain, it seems that what the media is calling a “mural” that was painted over with black paint, was actually an illegal set of giant yellow letters saying BLACK LIVES MATTERS on the ROAD! And the couple were just restoring the road to what it legally has to look like. So that is the state of media today.

If its communist propaganda grafitti, its a “mural”. If someone does anything to it, its a HATE CRIME. This is in fact exactly what Marcuse/Habermas plotted with the Frankfurt School. Please see post below with 3 videos.

The California couple caught on video painting over the "Black Lives Matter" mural have been charged with a HATE CRIME.

They face up to one year in jail. pic.twitter.com/fpfme7gnZK

MUST LISTEN: Swedish government guilty of killing the elderly by lack of proper treatment, and mandating drugs that kill under those circumstances

An explanation of why morphine kills people with difficulty breathing:

When they first pretended that they were going to establish a home in a remote part of British Colombia Canada, we called BS right then and there. It was virtue signalling to be part of the “hate-trump elite, who seem to be sponsoring their move from the Royal family in some ways. Now with the fear that they might actually have to stay in Canada for a few months from lock downs, they practically teleported to LA where they wanted to be in the first place.

Watch this to the end. It contains ANTIFA in their own words.

The entire interview on Syria, and Trump’s seeming change of direction can be seen here.

#ExtinctionRebellion-Gründer Roger Hallam: »We’re going to force the governments to act. And if they don’t, we will bring them down and create a democracy fit for purpose. And yes, some may die in the process.« pic.twitter.com/z8FjFlEIFq

In a stunning, and yet consistent with ideology, display of totalitarian psychopathy to his own people, Venezuela’s maduro, hanging on to power by the blood and treasure of others, has fired on civilians trying to allow aid to enter the country via Brazil.

Quite fascinating how leftists want borders destroyed to let in everything bad to democratic nations, yet once they trash the place with their communist/postmodern failures, they want the border closed to make sure no one can benefit from systems that actually produce wealth.

Two people have been killed and 12 injured after Venezuelan troops opened fire on civilians trying to keep a border checkpoint open for aid deliveries.

Troops arrived at a checkpoint set up by an indigenous community in Kumarakapai, on Venezuela’s southern border with Brazil early this morning.

But when civilians tried to block a convoy of tanks, soldiers opened fire killing two people including a woman named as Zorayda Rodriguez, 42, and wounding 12 others.

But pictures and video footage taken by a Brazilian journalist appears to show bullet casings taken from the scene along with medics treating people covered in blood from wounds to their legs.

The villagers are believed to have been trying to keep open a section of the border so that aid could be moved into the area from Brazil. President Nicolas Maduro ordered the frontier with the country shut yesterday and is now considering shutting the border with Colombia.

Hopefully videos will appear soon that can be added to this post. For the moment, its just Youtube talking heads with their own analysis and no more information that the above.

But let’s hope someone has a drone overhead and releases a little footage. 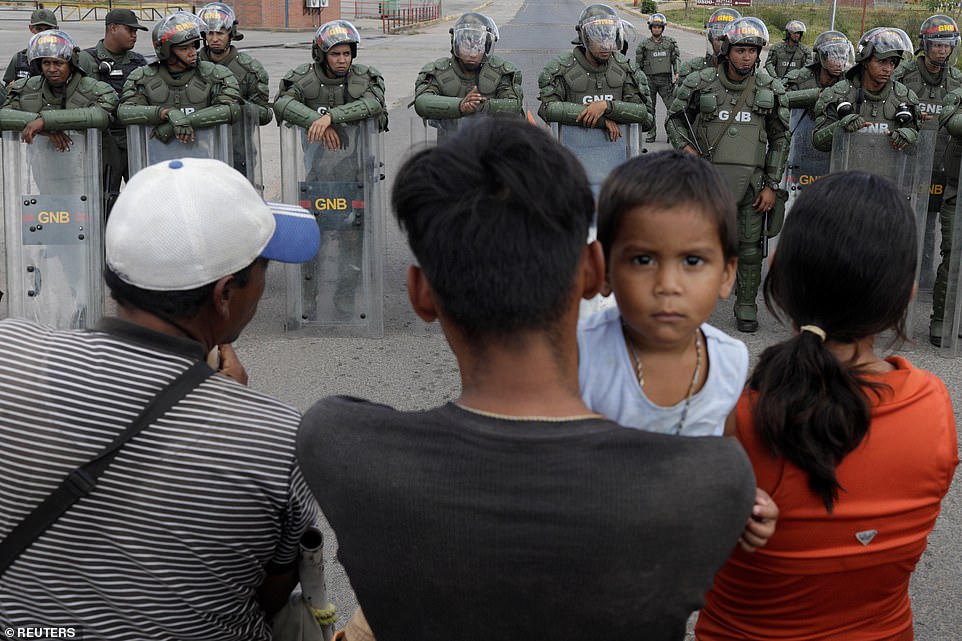