Does anyone believe there will be less violence in America if Donald Trump is reelected?

***UPDATE: The man attacked in 2 videos below is not dead, but is reported to be stable in an area hospital.***

First, this one from Downtown Seattle. Rioter manages to get a serious weapon from torched police car. Special forces disarm.

This is 2 videos. One is the start of what was likely a fatal attack on a man who was defending his store. Notice how one of the attackers uses fast deliberate and trained movements. Also he is a skinny white guy dressed all in black and uses a skateboard as his weapon along with throwing rocks.

Everything about the attacker with the skateboard screams ANTIFA

Lead up to the attack. The gentleman trying to protect his store from looters was pelted with rocks. #GeorgeFloyd

This next video is quite disturbing, It was where they seem to kill this man. Please be warned. If this subject wasn’t so important, we would not post it.

Stephen Coughlin offers us all this analysis.

The paper is called, “When does a state become a Counter-State?”.

Plan to make this a read ASAP.

The chart below is interesting: 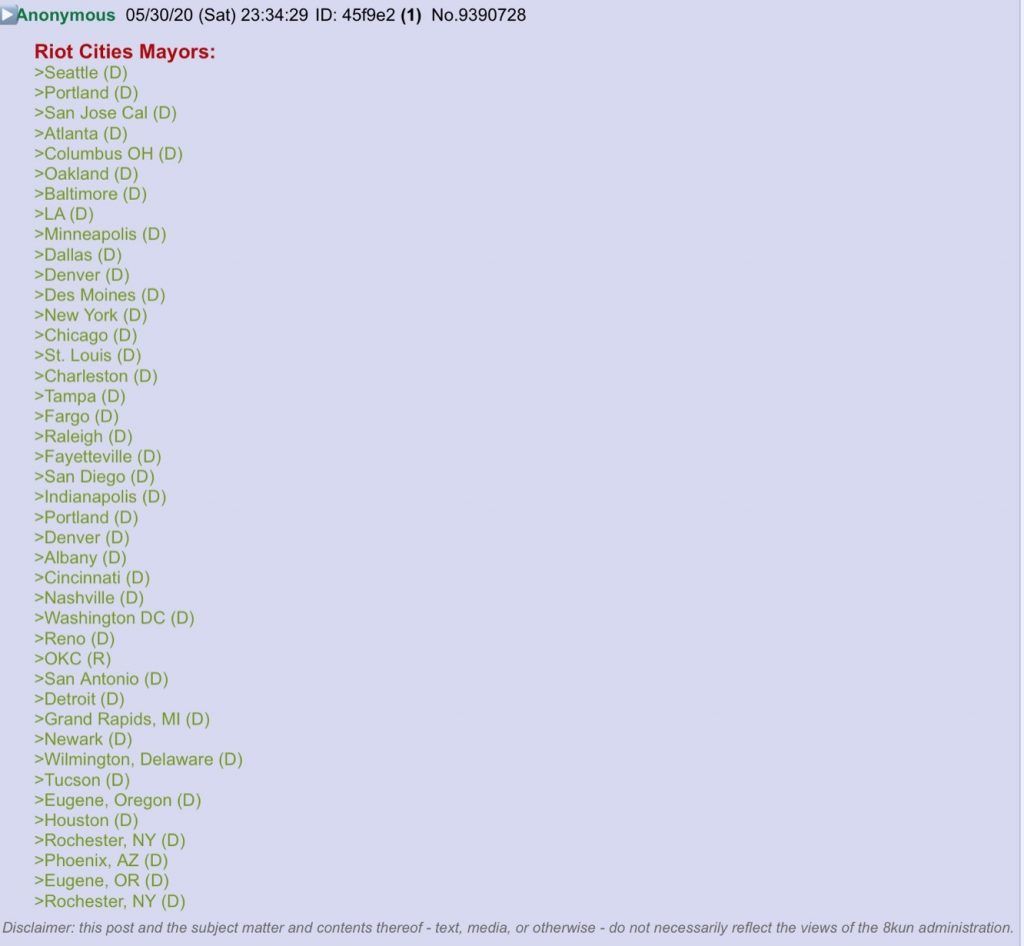 One wonders what possible motive these Democrat mayors may have for anything between not effectively stopping these riots to actually enabling or even feeling and motivating them?

This may be a couple of them:

The only part that has real meaning is the last part. The first part is a desperate attempt to justify her component of these destructive events. Is anyone aware of her speaking to the importance of the lockdown measures as they apply to rioters?

Below are some moments from a DSA meeting where one municipal elected official of one city pretty much lays out the goals that we see in play right now:

There are a lot of people watching and analyzing these events to thank. Malevolent Pixie, ML. M., MissPiggy, Sassy, and many more. This may be a very significant moment in US and Western history. It is also very important that things fall back into the court of the principles laid out in the US constitution, wherever you happen to be.

Being mindful of that, is certainly a good start.

For the last 4 years, far-left extremist have violently assaulted Trump supporters and their attacks are escalating.

Now an activist group has launched a website called "Racist Watch" that maps out the name and address of every individual who donated to Trump's 2016 campaign. pic.twitter.com/dfk97kIrWh

#ExtinctionRebellion-Gründer Roger Hallam: »We’re going to force the governments to act. And if they don’t, we will bring them down and create a democracy fit for purpose. And yes, some may die in the process.« pic.twitter.com/z8FjFlEIFq

An original translation by CrossWare with much thanks!

From The Hungarian Daily: Magyar Id?k

The prime minister spoke on Kossuth Radio: the new Brussels plan is that if we can not get Hungary to allow in migrants, then we have to get the right to border protection. “They want to take away the gate keys from us,” he said.

They Would Take Away the Border Control From Us!

He also talked about the fact that the next battle is about who defends the boundaries of Hungary, who decides who enters the country.

“Now we’re looking at the cat that has to come out of the bag,” and the “cat” is that Angela Merkel has sent an ultimatum to Europe via French President Macron. The Chancellor said that the European peripheries outside the Schengen area should reassign part of their border protection to Brussels, he recalled.

“The plan is this: if Hungary cannot be tempted to allow in migrants, then it must have its right of border protection take away. They do not want anything less than to send mercenaries here from Brussels, to replace our Hungarian sons: police and soldiers, who are defending the border, and for whom their home country is important. And we should not have illusions: they [the Brussels mercenaries] will let the migrants!” he said, adding that they want to stamp out Hungary, want to weaken Hungarian resistance.

“They simply want to take away our keys to the gates,” the head of government said. The Sargentini report [text here http://www.europarl.europa.eu/resources/library/media/20180411RES01553/20180411RES01553.pdf], however, is now being removed from the agenda or its priority scaled back, and the significance of the matter will decrease from day to day, he predicted.

Hundreds of Millions to Fake Civilians

He pointed out that, in addition to immigration, there is another serious stake in the next European Union election. It is clear from the EU budget statistics that the EU supports the Soros NGOs with hundreds of millions of euros.

If the next European Parliament and the European Commission have a different composition, these hundreds of millions will not be given to them.

He added that the European Commission gives money to organizations that operate anti-Semitic campaigns in Israel against Israel.

“The fact is that today’s center of modern anti-Semitism, funded by the anti-Israeli counterpart against Prime Minister Netanyahu, is in Brussels,” he stated.

He believed that this could not continue, and if it is up to Hungary, they will change this situation in May. He stressed that Hungary’s action against anti-Semitism is a matter of humanity and honor.

Today, Europe Lost The Internet. Now, We Fight Back.

Today, in a vote that split almost every major EU party, Members of the European Parliament adopted every terrible proposal in the new Copyright Directive and rejected every good one, setting the stage for mass, automated

surveillance and arbitrary censorship of the internet: text messages like tweets and Facebook updates; photos; videos; audio; software code — any and all media that can be copyrighted.

Three proposals passed the European Parliament, each of them catastrophic for free expression, privacy, and the arts:

1. Article 13: the Copyright Filters. All but the smallest platforms will have to defensively adopt copyright filters that examine everything you post and censor anything judged to be a copyright infringement. […]

An original translation by Tania Groth

When the polling station at the Annedals School in Gothenburg opened, the Sweden Democrats’ party papers were nowhere to be found. It was only when SVT News called more than two hours later that SD ballot papers were added to the others.

“This is extremely serious and we will get to the bottom of this,” says Jörgen Fogelklou, the chairman of SD in Gothenburg.

Election workers working in the polling rooms are responsible for ensuring that there are ballot papers available for all parties that have received more than one percent of the votes throughout the country during any of the two most recent parliamentary elections. With regard to the actual ballots, it is up to the parties themselves to make sure they are distributed to the various polling stations (throughout the country). However, in the polling station at the Annedals school in Gothenburg, the Swedish Democrats’ ballots were not put out along with the other parties’.

Bill Werngren, electoral manager of the city of Gothenburg:

“This is extremely disturbing. The election authority is required to ensure that everything is done to the letter. Whether it is deliberate tampering or a mistake, we do not know. But it IS strange,” says Jörgen Fogelklou.

It was only when SVT News contacted the election manager in Gothenburg, just over two hours, after the doors were opened at the polling station, that the irregularity was discovered.

“I think it is regrettable that they have left out the Swedish Democrats at this polling station,” said Bill Werngren, electoral manager for the city of Gothenburg.

After a little over two hours

“It has been a bit over two hours since the polling station opened, and you didn’t notice that the ballots were missing before SVT pointed it out. How can that be?”

“We have trained 2,500 people to work at the polling stations, and they have received exactly the same training, but the understanding of the task by these people clearly varied,” said Bill Werngren.

According to him, those working at the polling stations receive training in, among other things, how the ballot papers should stand and exactly what ballot papers they are required to provide, yet the missing Swedish Democrats ballots was not discovered.

“They cannot stand there all the time and check, but it’s unfortunate that they missed this. Then, of course, mistakes can be made.”

Bill Werngren is responsible for 350 polling stations in the city of Gothenburg and, according to him, he has not heard of any other places where ballot papers for a particular party were absent. It is unclear what happened in the case of Annedalsskolan.

“Either there has been a mistake or they were stolen, and it was not discovered until now,” said Bill Werngren.

The chairman of the Swedish Democrats in Gothenburg is very upset about what happened, and has informed the election authorities that the party intends to investigate the issue.

“We will now keep an extra sharp eye out, because this is extremely serious and very remarkable,” says Jörgen Fogelklou.