Here is a fascinating look at how the EU uses actual racism to sell communism while using the word racism to attack all who would like not to be fully negated by the EU.

Check out how this French commercial mocks Italy and Italians for spreading the Wuhan Flu to France:

Your stereotypical Italian Pizza Chef coughing and spitting up on your pizza. Thats OK for a French TV spot.

This all stems from the reveal that the virus spread to France via someone from Italy who was asked to self quarantine and instead went on working either delivering or making Pizzas.

But who is this mysterious patient zero?

It is this guy:

The man, a Pakistani, although asymptomatic, was invited by Italian health authorities to place himself in quarantine at his home in the Pavia area, but did not follow the suggestion and went on as if nothing had happened at the Chinese restaurant where he worked.

A young man of Pakistani origin residing in a municipality of Lomellina, in the Pavia area, tested positive for the Coronavirus and was asked to stay home for two weeks so as not to infect others.

According to Adnkronos, instead the foreigner ignored what should be common sense, and thought it well not to respect the quarantine. And he compounded the risk by making home deliveries of Chinese food.

Fortunately, the Carabinieri of the local station, who intervened following an anonymous report by some particularly attentive citizen, thought about stopping the careless migrant. The military intervened to return him to his home, at least for the period provided for by the protocol in cases like this.

Yep. He is about as Italian as Pope Francis is Catholic and Pizza as we know it, is Italian.

In many Islamic areas, muslims are refusing to stop gathering at mosques, and the “If allah wills it” mentality of Islam tends to de-incentivize muslims from changing any behaviours since they figure allah knows best and will arrange things as he wills it. So we can count on Islam’s followers to spread this virus for these, as well as the self made bio-weapons jihad reasons, just as we can count on some African customs of touching the bodies of the dead to make sure Ebola keeps on going.

Thank you Miss Piggy for this great reveal.

OSCE statements by Trudeau’s delegate on hate and thought crimes.

On the OSCE seeming to promote migration over integration

Anyone thinking of buying a Cross of Matamoros from this site for themselves or someone else for Christmas may want to do so soonish, as A. I have some in stock, and B. the post office has time to get it to you, and then to whomever you may wish to send it to on time.

1. Elisabeth Wolff berates the OSCE on its selective enforcement of its speech codes.

2. Henrik Clausen asks the OSCE to ask for the repeal of blasphemy laws world wide:

3. Clare Lopez explains that under sharia, any notion of equality (or equity) is obliterated

4. OSCE: “The Southern Poverty Law Centre IS a hate group.

Giving people oxytocin alongside positive social pressure increases kindness toward refugees, even in those with a fear of foreigners, new research has found.

The hormone is released naturally by humans during social and sexual behaviour, and research has shown it breeds trust and generosity in others.

Oxytocin, known as the love or ‘cuddle hormone’, together with being surrounded by charitable peers was found to boost people’s willingness to donate money to refugees in, even in those with a sceptical attitude toward migrants.

today was apparently his birthday.

The CBC in its typical far left wing extremist purveyor of the narrative fashion, has seen fit to disable comments for this video at Youtube.

So please feel free to leave them here.

Allow me to start with my own.

I think the former MSA leader and MB sympathizer in the Trudeau government either wrote those comments and insults herself, or members of her various support groups did in order to add inertia to the Islamophobia bill she wants passed in Canada.

A portion of Stephen’s presentation was concerning a specific event in Warsaw. Below, is an edited version of that portion of the OSCE conference on Islamophobia and hate speech which helps a great deal in understanding much of the substance of Maj. Coughlin’s presentation.

This conference was sponsored by: http://www.americanfreedomalliance.org/

This video has been posted at this site before of course but a bunch of us volunteers have decided to pitch in and do a minor rosetta project on it as we feel, along with Robert Spencer, that not just English people need to be able to see this information.

We still need French for this video by the way.

Here are the links we have done so far:

Please feel free to copy these links and send them to whomever you feel needs to see them in those languages. I will post new ones as they appear here. Perhaps also we can summon the energy to also do the second video in the series, already published in English.

Here is the original in English.

Anyone interested in doing a translation for titles please leave a comment under this post and I will arrange to get you a timed transcription in English.

Anyone else see a problem with how Euronews covered this event?

Not so much that the rules change perhaps, as what constitutes a winning hand. Basically the strong call the wild cards.

Now this article from Nicolai Sennels:

And then this article from Blazing Cat Fur. Don’t skip the comments.

The full video is here.

Thank you Nicolai and Liberty Dk.

A Moroccan daily paper has photoshopped the French president into Adolph Hitler. The paper details how Francois Hollande is preparing the extermination of muslims. 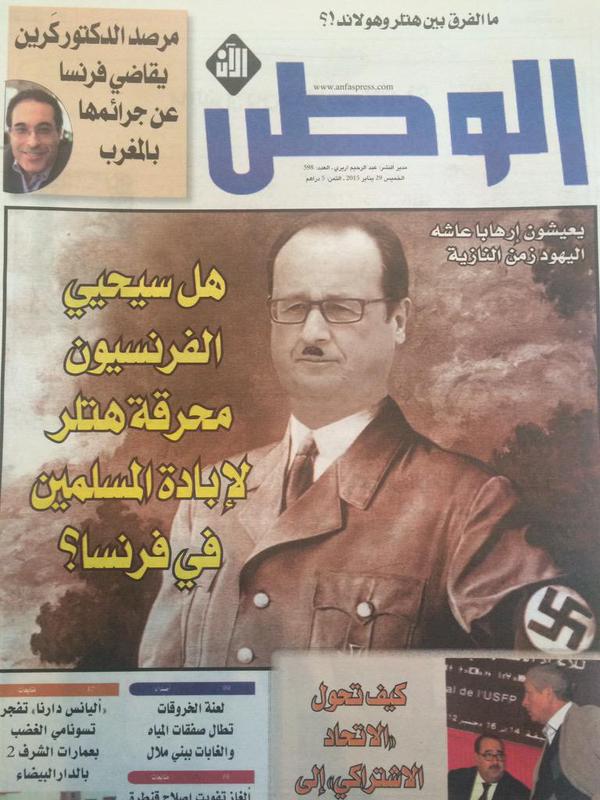 The Arabic Moroccan daily (Al Watan al An) wanted to shock and it did:

Three days after the celebration of the 70th anniversary of the liberation of Auschwitz-Birkenau, in one sedition on the 29th of Jan. Francois Hollande is disguised as Adolph Hitler more truly than nature: Small mustache, dressed as Nazi and Nazi armband.

Beside the picture, the title in Arabic allows people to think: “Will the French recreate the concentration camps of Hitler to exterminate the Muslims?”

The Moroccan French weekly, (Telquel) has questioned the director of the publication, Al Watan al An, of this choice of scoop. “It is very lightly against the French president. He deserves worse. The French government does not ensure the security of Muslim citizens in France as is the case for the Jewish community”

(Arabic name) “The journalist rejects the responsibility of the many anti-islam acts, 128 acts took place in the last 2 weeks representing almost as many as in the year 2014 total, following the attacks in Paris towards the French government. Many places of muslim worship are attacked daily without it bothering the French authorities”.

That sees the left and the French right in competition to see who will cause the most damage to the muslim community, goes as far as saying that the French is preparing the country to deprive the muslims of roofs over their heads and employment if it continues this way.

Telquel reminds that this article and this scoop could fall under the code of the Moroccan press according to article 52, ‘offense publicly committed against a chief of state and their dignity, a chief of government, ministers of foreign affairs of foreign nations, will be punished by imprisonment of one month to one year and a fine of 10,000 to 100,000 Dirhams or one of the two sentences only.