It is difficult to tell what the policy is here. In a way, it appears as if the Belgians treat every muslim praying in the road as if they were precious endangered creatures the way a line up of American cars on the highway will stop and wait patiently for a mamma duck and her chicks to walk across, or maybe eventually calling animal control to safely remove a deer from the highway.

Or, are they so afraid of every religious muslim there is a special protocol in case they detonate or something. But for sure, it doesn’t look like when you see anyone else in the middle of the road obstructing traffic. Special rules are at play.

An abridged version of an article from PI News, and written by MICHAEL STÜRZENBERGER

Translated by MissPiggy and much thanks for that!

Why aren’t there any Merkel bollard/lego blocks? Muslims live safer here than the “Taxed to Max” begrudgingly tolerated old burdens without a “migration background” who before 2015, called themselves German.

Last Saturday, about three thousand Muslims carried out a “breaking of the fast” in Munich’s Luitpoldpark. With demonstrative public “praying”, flooded with light at night, with microphone sound and the praising of Allah as the greatest god. The video of the uncanny scenery was shot by a shocked Munich citizen and reminds us of the nightly marches of the National Socialists. After all, in both cases it’s all about public demonstrations of power. Among the participating Muslim organizations were the Turkish nationalist associations “DITIB” and “Islamic Community Millî Görüs” as well as the “Islamic Relief” interwoven with Muslim Brotherhoods.

The Islamic land seizure was organized by the Muslim Council of Munich, flanked by the Migration Advisory Board and supported by the Intercultural Office of the Social Department of the City of Munich. In the best of company, since Milli Görüs was banned in the modern Atatürk-Turkey because of extremist tendencies, but Erdogan abolished this after his assumption of power. In Germany, the Federal Office for the Protection of the Constitution sees this organization as an anti-democratic understanding of the state and a rejection of Western democracies.

The Turkish leader has been talking for years about “leading Islam victoriously to the West”, sees Turkey as a “world power” that should “vaccinate Europe with Turkish culture”, so that the continent will soon be “Turkish”. Stocked in this manner, it will lead to enthusiastic visions like “My Führer, give us the order and we will smash Germany”. Erdogan as a little Hitler, whose Nazi Germany he himself has already named as a role model.

Officials of the Turkish colonization authority “DITIB” therefore see Erdogan as their “Supreme Army Commander”, to whom the DITIB junior staff here in Germany organizes pilgrimages. In the “Neue Züricher Zeitung”, this organization is ascribed the apt term “parallel partner”.

In the illustrious round of fundamentalist associations during this public breaking of the fast, “Islamic Relief” is also represented, which is regarded by the Federal Office for the Protection of the Constitution as an institution in the action network of the Muslim Brotherhood. Right in the middle of it instead of just being there: Imam Bajrambejamin Idriz with his “Munich Forum for Islam”, one of the biggest spiders in the German Islamization Network:

?The tolerance drunk editor Pia Ratzesberger of the Süddeutsche Zeitung is pleased about the, in her eyes, “open” celebration and quotes from the political speech of the head-clothed Seyma Yüksel, member of the board of the Muslim Council, who complains about alleged “racism” and warns against “populist” parties which strengthened in the EU election:

She says into the microphone, “We have a problem and it’s called racism.” She talks about the European elections, about the populists and nationalists who have rejoined parliament. She talks about discrimination when looking for a job or an apartment. The Muslim Council in Munich is now offering a form with which any discrimination can be reported: “Because every incident that is not reported is a loss”. And there are many of them. The form is only available online now, but she has already collected more than a hundred cases in recent weeks, Yüksel says after her speech on the edge of the stage. Above all women with headscarves are attacked, insulted and pushed at bus stops, insulted on the street. Those who wear headscarves are abused every day, sometimes several times, says Seyma Yüksel. This is another reason why breaking the fast in Luitpoldpark is so important.

Totalitarian political Islam uses the terms “tolerance”, “welcome culture”, “diversity”, “participation” and “freedom of religion” propagated by the left mainstream of Western free societies in order to spread and creep into majority positions. Until Muslims can then finally step to the sole seizure of power that their “religion” compellingly prescribes to them.

As in 1933, Germany falls into the stranglehold of a fascist ideology and once again only a minority notices what is going on. When the catastrophe comes, many will again say that they “knew nothing” about it. History can repeat itself in a similar form, but does not have to. If all the people who know the facts now uncompromisingly and intensively strive to enlighten the still largely unsuspecting majority society, the apocalypse can still be stopped this time.

A British friend shared this London bridge blocking traffic yet no arrests pic.twitter.com/6VtQT388FG

Thank you Tania for this great shot. A new post with more photos and video will be coming tonight. This square is the equivalent of Parliament Hill as the premiere location for protest in Denmark. 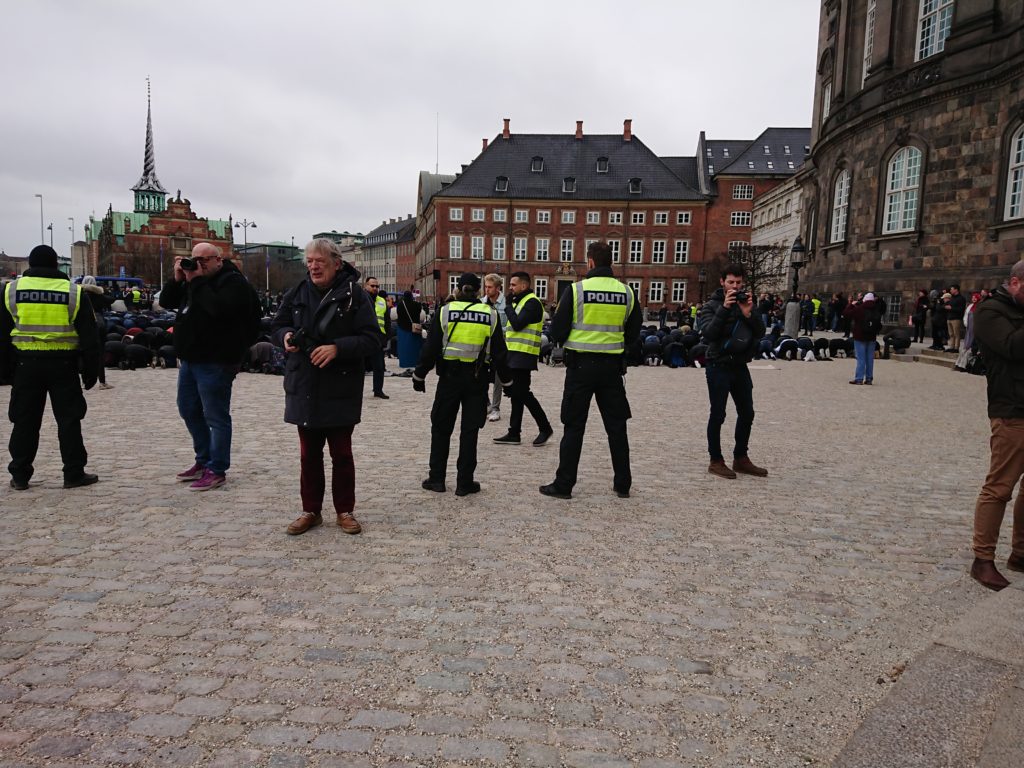 Here is the Wiki link to Hizbut ut Tahrir’s self described nature.

This is a group determined to create global Islamic manifest destiny.

Yet Jordan Peterson is banned in parts of New Zealand because of one photo of him standing next to a man in this T shirt: 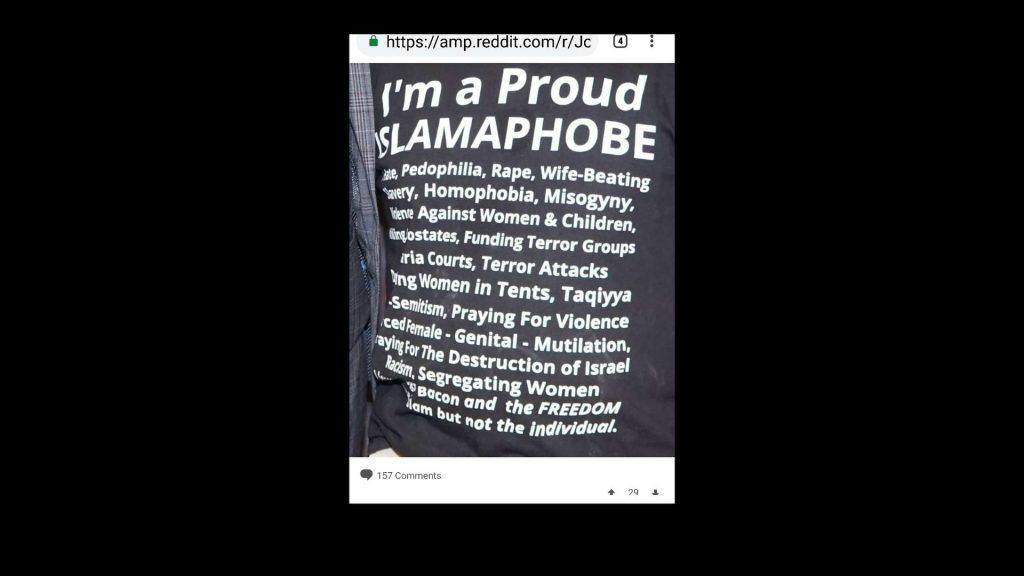 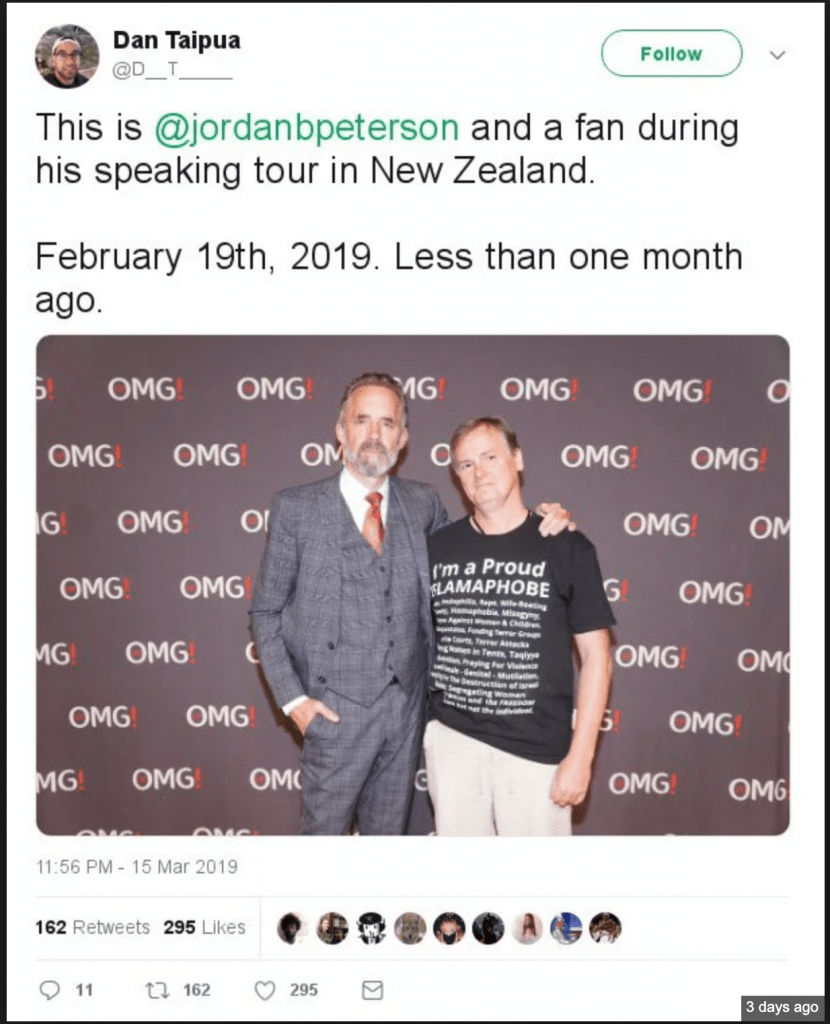 A slight zoom of the public ritual display: 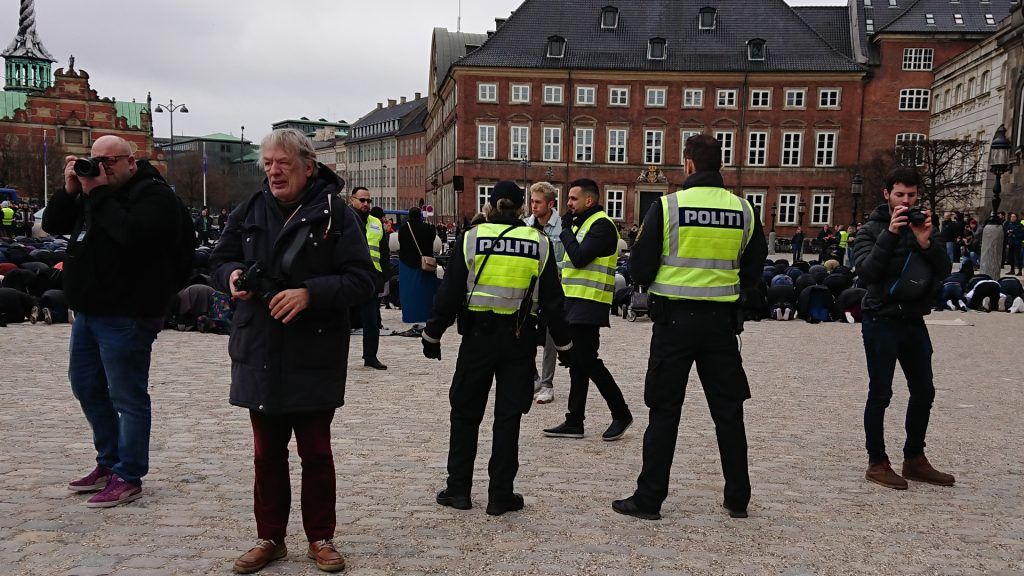 They do not appear to have been filmed with knives and chains on the streets in public yet that we are aware of so far. But for those who read the comments under the Reader’s Links posts, it clearly clearly is.

Its funny how often muslims demand respect be shown in a purely ‘one way’ manner.

No respect for non muslims when taking over public property for purely islamic use, but full demand on the rest of the world to respect them as they do so.

This is the same women who appeared on French TV recently to explain the real meaning and purpose of Islamic street prayers.

Meanwhile on the streets of London.. You won't see Hindus, Buddhists or Christians do this pic.twitter.com/GDsFgTEwgU

November 11. Locals meet up against the illegal street prayers (with serious PA system) on the streets of Clichy

Lyrics to the French National Anthem which the patriots are singing:

Arise, children of the Fatherland,
The day of glory has arrived!
Against us tyranny’s
Bloody banner is raised, (repeat)
Do you hear, in the countryside,
The roar of those ferocious soldiers?
They’re coming right into your arms
To cut the throats of your sons, your women!

What does this horde of slaves,
Of traitors and conspiratorial kings want?
For whom are these vile chains,
These long-prepared irons? (repeat)
Frenchmen, for us, ah! What outrage
What fury it must arouse!
It is us they dare plan
To return to the old slavery!

What! Foreign cohorts
Would make the law in our homes!
What! These mercenary phalanxes
Would strike down our proud warriors! (repeat)
Great God! By chained hands
Our brows would yield under the yoke
Vile despots would have themselves
The masters of our destinies!

Tremble, tyrants and you traitors
The shame of all parties,
Tremble! Your parricidal schemes
Will finally receive their reward! (repeat)
Everyone is a soldier to combat you
If they fall, our young heroes,
The earth will produce new ones,
Ready to fight against you!

Frenchmen, as magnanimous warriors,
Bear or hold back your blows!
Spare those sorry victims,
Who arm against us with regret. (repeat)
But not these bloodthirsty despots,
These accomplices of Bouillé,
All these tigers who, mercilessly,
Rip their mother’s breast!

Sacred love of the Fatherland,
Lead, support our avenging arms
Liberty, cherished Liberty,
Fight with thy defenders! (repeat)
Under our flags, may victory
Hurry to thy manly accents,
May thy expiring enemies,
See thy triumph and our glory!

(Children’s Verse)
We shall enter the (military) career
When our elders are no longer there,
There we shall find their dust
And the trace of their virtues (repeat)
Much less keen to survive them
Than to share their coffins,
We shall have the sublime pride
Of avenging or following them

The newest update of the Brave Browser supports Bitchute videos now! And also has another cool feature. It shows a little speaker on any tab which is making noise and you can click the speaker icon on the tab and stop it, even without having to go to the tab!

This past week there has been a lot of news about thee illegal street prayers in Clichy. It started with a few, maybe seven, French citizens objecting to the violation of many French laws, but mostly the ones on state secularism:

It was discovered shortly after that the reason for the street prayers was that the mosque offered to them was about a mile away, (1.5 Kms) from the spot of the street prayers and they wanted a mosque right there. Add to that, most of the muslims at this event were bussed in from much farther than a mile.

Then we find out, from the Mayor of Clichy no less, that the muslims have been praying for the murder of Jewish people that any of them may meet in day to day life. Also they handed out literature saying the same.

And now, the muslims have hired a lawyer to sue the mayor and all who protest their illegal protest in the streets.

Thank you Ava-Lon and Oz-Rita and all who translated and worked on these videos.

Be aware people. This is not a set of isolated incidents. This is a manifestation of policy. If you do not get this, it is your demise.

It seems that the muslims in Paris were initially blocking much of various locations in France with street “prayers” (really political statements) because they claimed they didn’t have a mosque to go to. So one was apparently provided, I think by government despite secularism laws that should have prevented that.

But the street blockades continued because the mosque wasn’t right downtown where they wanted it.

And now fights are breaking out.

Please watch the video for explanation.

Thank you Ava Lon for the translation, this was a tricky one, and please post any corrections to my explanation here in the comments in case we have any details wrong in this explanation.

First, the actual video. Street prayers on a major boulevard in Paris. Not some side street in the Barber district.

And below, an analysis by Aldo, the expat Algerian man who frequently does excellent commentary on the facts about Islam in Western nations, primarily France: