Administration knew of arms being shipped from Benghazi to Syria

(Washington, DC) – Judicial Watch announced today that it obtained more than 100 pages of previously classified “Secret” documents from the Department of Defense (DOD)and the Department of State revealing that DOD almost immediately reported that the attack on the U.S. Consulate in Benghazi was committed by the al Qaeda and Muslim Brotherhood-linked “Brigades of the Captive Omar Abdul Rahman” (BCOAR), and had been planned at least 10 days in advance. Rahman is known as the Blind Sheikh, and is serving life in prison for his involvement in the 1993 World Trade Center bombing and other terrorist acts.  The new documents also provide the first official confirmation that shows the U.S. government was aware of arms shipments from Benghazi to Syria.  The documents also include an August 2012 analysis warning of the rise of ISIS and the predicted failure of the Obama policy of regime change in Syria.

The documents were released in response to a court order in accordance with a May 15, 2014, Freedom of Information Act (FOIA) lawsuit filed against both the DOD and State Department seeking communications between the two agencies and congressional leaders “on matters related to the activities of any agency or department of the U.S. government at the Special Mission Compound and/or classified annex in Benghazi” (Judicial Watch v U.S. Department of Defense and U.S. Department of State(No. 1:14-cv-00812)).

Spelling and punctuation is duplicated in this release without corrections.

A Defense Department document from the Defense Intelligence Agency (DIA), dated September 12, 2012, the day after the Benghazi attack, details that the attack on the compound had been carefully planned by the BOCAR terrorist group “to kill as many Americans as possible.”  The document was sent to then-Secretary of State Hillary Clinton, then-Defense Secretary Leon Panetta, the Joint Chiefs of Staff and the Obama White House National Security Council.  The heavily redacted Defense Department “information report” says that the attack on the Benghazi facility “was planned and executed by The Brigades of the Captive Omar Abdul Rahman (BCOAR).”  The group subscribes to “AQ ideologies:” […]

Defend Europe and a Libyan patrol boat ended the Golfo Azzurro’s presence near African coasts! The captain of the Libyan coastguard knew our mission and we talked on a cooperative basis. Meanwhile, this same patrol boat was commanding to the Golfo Azzurro to leave the area as quickly as possible. The last message from the Libyan coast-guards was: “leave and never come back!”. We recorded both these communications and will release them now. 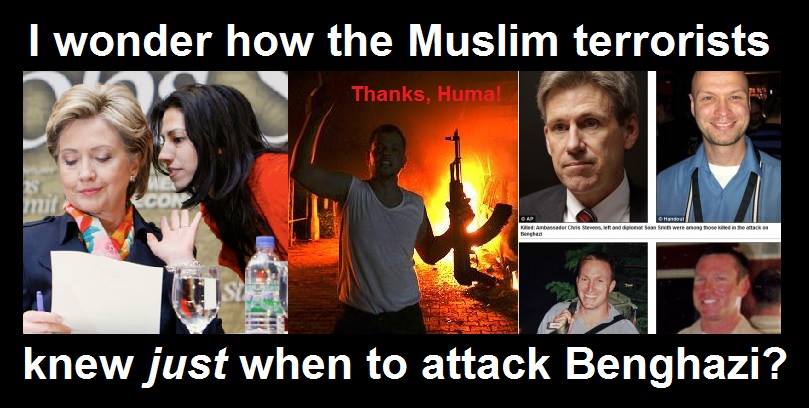 Thank you Matt B.

All photos from this page

This map may help put in perspective where exactly this is taking place. Map courtesy of Gates of Vienna 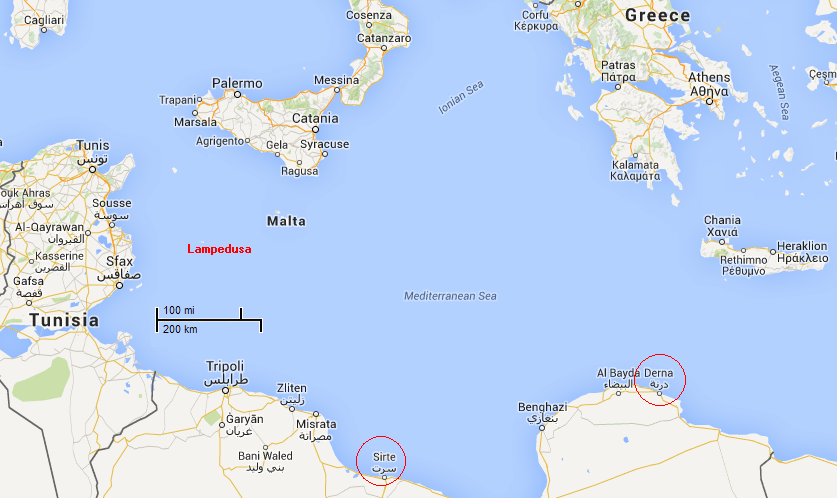 The following pictures are alleged to have been taken in Sirte. That is at the bottom of the map just left of center. H/T M 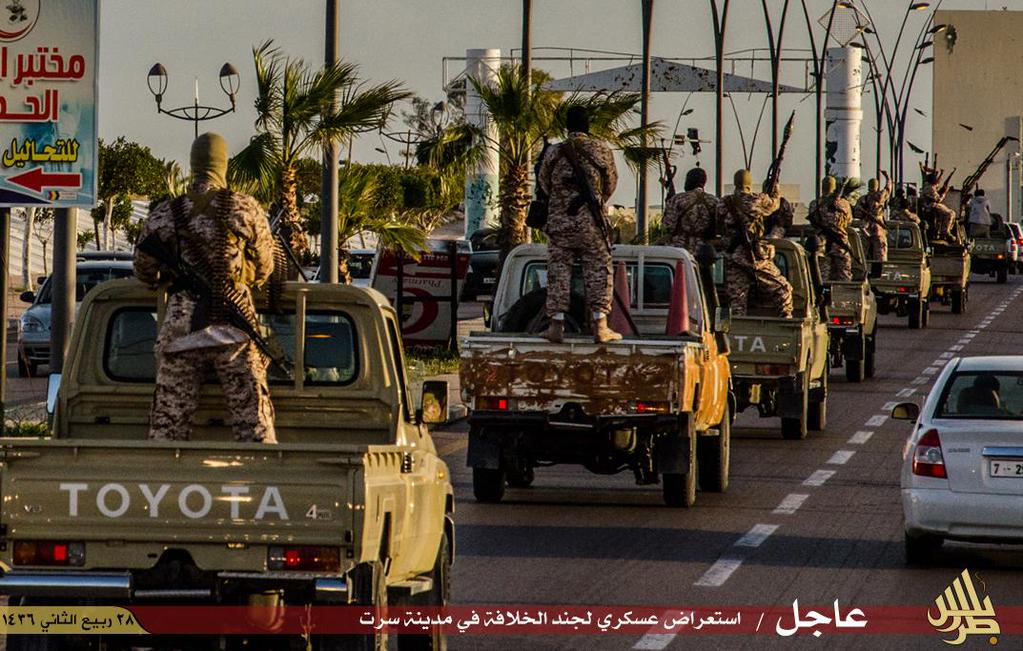 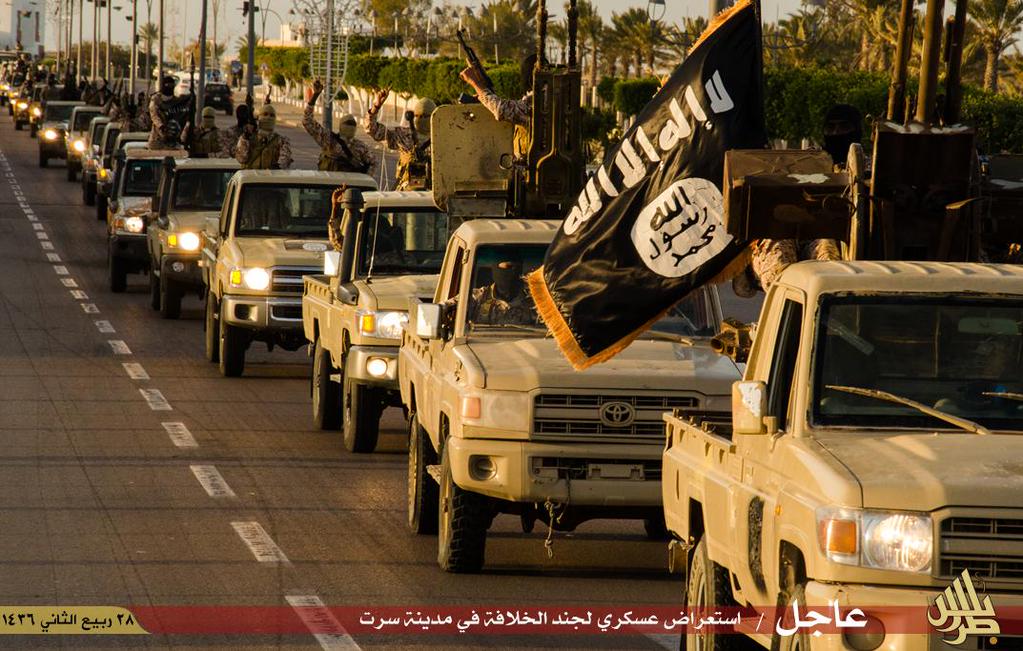 There is always more than one way of course. But this story out of Libya is quite revealing.

If you combine standard MAFIA operating procedures with a giant organized psychopathic religious cult and Stalinesque approaches to institutional bodies, one can stretch one’s imagination to see how you could accomplish the dissolution of a government merely by threatening whatever body which is legally able to do that.

Or perhaps more accurately, threatening the bodies of the people who sit on those organizations.

Libya’s supreme court has invalidated the country’s internationally recognised parliament after a legal challenge by a group of politicians. 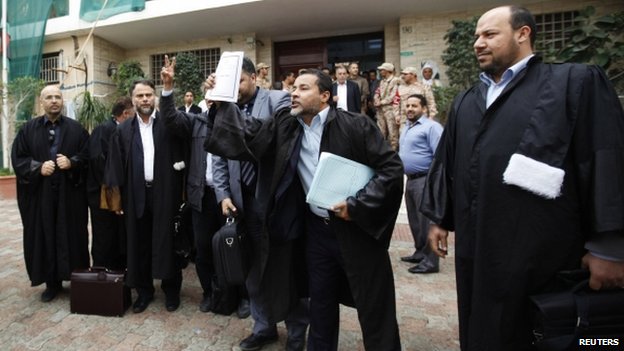 The ruling was celebrated by militias occupying the capital Tripoli, who have set up an alternative parliament.

But the critical paragraph is:

Politicians in Tobruk, the city near the Egyptian border where the parliament is now based, have repeatedly alleged that Tripoli’s courts, judges and their families have been under threat by the coalition of armed groups that controls the capital.

Yes, Muslims would have to have quite a grip to be able to pull something like this off. But organized crime does it in small ways every day. So just think about what a few thousand fanatically dedicated religiously motivated men could do once they feel the time is right.

I haven’t watched this yet, but I do know it needed to be made.

It is a worthy observation that Clinton, who does not at this time hold a major government post, enjoys a lot more security on a book tour in her own country than she afforded to a gay American US ambassador to a nearly anarchistic-Islamic nation practically run by Al-Qaeda.

he 2012 terrorist assault on the U.S. diplomatic post in Benghazi, Libya, involved attackers from several major international terrorist networks, according to a bipartisan Senate report released Wednesday that blames the intelligence community and the State Department — and Ambassador J. Christopher Stevens himself — for lapses.

Libya continues to spiral into  an even more dissolved state, if that’s at all possible anymore. A report here from RT