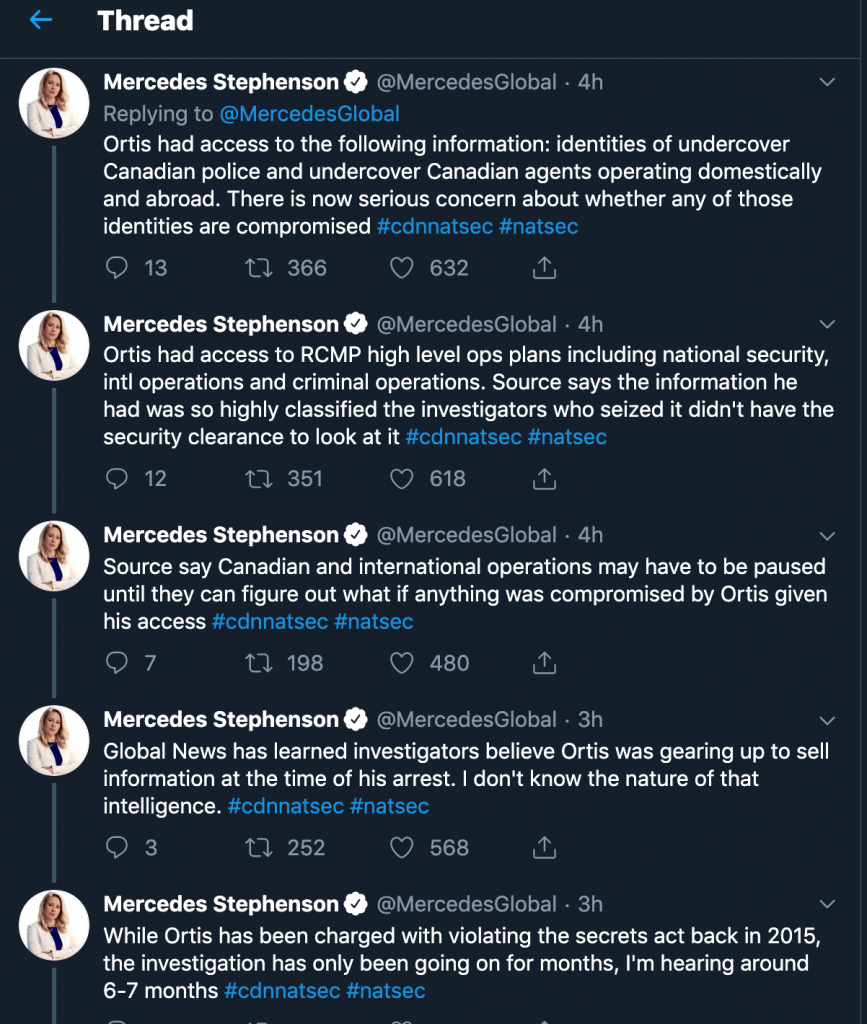 The link to the thread is here.

The story at CTV:

There is a video, stumblingly read at CTV, which gives some information but avoids a lot more. Who did this cyber-info expert sell out to and perhaps more importantly, why.

TORONTO – An RCMP employee has been arrested and charged under the Security of Information Act, a national security law that addresses security concerns, including threats of espionage by foreign powers.

In an emailed statement to CTV News, an RCMP spokesperson said that Cameron Ortis was charged under three parts of the Security of Information Act and two parts of the Criminal Code of Canada.

“The charges stem from activities alleged to have occurred during his tenure as an RCMP employee,” the statement says, adding that as the investigation is ongoing, the RCMP will not be making further comments at this time.

“[Ortis] is a civilian cyber security guy in the RCMP and the combination of charges implies he’s accused of either hacking or just plain out stealing sensitive info through digital networks presumably and passing it along,” Prutschi said.

A spokesperson for the office of the Minister of Public Safety Ralph Goodale said in a statement emailed to CTV News that “Canadians can continue to have confidence in their security and intelligence agencies to protect our safety and rights,” and that all questions should be directed to the RCMP.

Some indications are that this event is MASSIVE

Cameron Ortis is expected in an Ottawa courtroom at 2pm today. Security experts are saying what he is alleged to have done is massive. As DG of the RCMP's intelligence unit, he would have had TOP SECRET access to all RCMP operations on the ground. This is "HUGE."

We can confirm accused is Cameron ORTIS … early indications is that he has academic ties to British Columbia, and has presented to counterintelligence conference in Vancouver, he is an academic. https://t.co/Tzv8DPlEm9

When our Bulgarian translator, Tanya T., did this for us, we uploaded it to Youtube and it vanished in minutes with no explanation. No CR infringement or other reason, it just was taken down.

Then we tried the other traditional platforms, LiveLeak etc. and the same thing happened on all of them. Stunningly, even on minds.com, although it reappeared there after some time.

It initially lasted an hour or so at Minds.com if I recall correctly.

After the 2016 election, we tried again with more success. It was not pulled as fast or at all from some platforms but I wanted it out there on a torrent based one like d-Tube.

Now that it is clear that the Obama administration knew that the attack on the US embassy in Benghazi was an Al-Qaeda/nascent Islamic State attack, and, they they knew it was coming 10 days before it happened, what you see in this documentary becomes more than interesting. It becomes obvious.

Clearly the Obama-Clinton Kabul was running weapons and supplies to the Islamic State or the proto-groups that made it up in Syria and Iraq as The Baron at Gates of Vienna speculated at the time.

What I did not know until half an hour ago in another interview with Brad Johnson that will be posted tonight, is that the killers of Ambassador Stephens, who was murdered in the US embassy in Benghazi, paraded his corpse around the city naked, with a stick up his behind.

This was also covered up by the Clinton Crime cartel.

Brad will discuss this in the interview to be posted as soon as I have it uploaded.

Thanks to retired CIA station chief, Brad Johnson for having an in depth look at this report done every 4 years to see where operational capacity is for US intelligence agencies.