Victoria police deliver letter to independent, (non-narrative) journalist warning him not to go to a freedom protest or face arrest for incitement. Video date, May 28. 2021

2. Scenes from protests in Victoria Australia. The minor key cello and piano is annoying as hell. But the content still matters.

3. May 24, 2021, Rebel: Jews being targeted and attacked by two HATE groups in Melbourne

(No embed. You have to click through for video)

On Sunday, the Melbourne Jewish community held a rally in solidarity with Israel.

When the peaceful event was announced, two extremist groups took to the internet, calling on people to travel to the Jewish neighbourhood:

So it’s no surprise that both groups showed up to interrupt the family-friendly event.

4. Victoria Police determine WHO is and WHO IS NOT accredited media!

This is very good. Perhaps even very important.

Above is a couple of excerpts from this lecture:

Nothing to see here.. It's OK. Just wear your mask and obey the chief health officer and you will be fine. https://t.co/ffKdLhRJxT

If what this fellow cites is accurate, it won’t lead to mandatory vaccination. First, you don’t give vaccines to people who already have the disease. Secondly, I would argue that vaccines are not medication. But I don’t know the legal position.

That doesn’t mean it’s not a bad law, or that we need not be on our guard for something even worse. But we shouldn’t be distracted by this.

Agree with her thesis or not, the fact that police, who in many countries like Canada and Germany, have a government monopoly on the use of force, have now run roughshod over their constitutions and taken on ultimate powers to determine people’s movements, purchases and even what we have to say about all this is undeniable.

Below are three videos. The press conference by the Virginia governor, which grants profound powers to police and prepares for something so serious it is initself a provocation to those that fear a tyrannical government, and an interview from today with Brad Johnson, as well as one with Infowars’ Matt bracken on this set of events and the coming “boogaloo”.

Gates of Vienna has an excellent article explaining the history of the two Virginias and the Ironic nature of the offer to any county wishing to escape the tyrannical rule of Richmond, and (re)join up with West Virginia to keep their constitutional rights as American citizens.

This is extraordinary. France is truly a police state and the laws are arbitrary and made up to please Macron as needs be. Make sure you have the captions on and turn on the auto translate and set it to English. The translation is unusually good. I may do a hard coded version anyway for posterity.

I just got word that all of Bitchute.com, Jihadwatch, and Blazing Catfur cannot be accessed in Australia.

Neither can the White House site to gather info on people who have been deplatformed.

This is one dark dark day for Western thought and democracy.

Australia should be treated with contempt, defiance and shame.

This site has suggested many times that readers get and use a VPN at all times. Its maybe 5$ a month or less if you buy blocks of months. Often less than $3.00 a month.

Nord is a good one as is AIR VPN but there are lots. Find one, learn to use it and you will not have these problems.

Election was called in Denmark 2 days ago on Monday.

Today, Wednesday the 8th of may is when the arrests took place, one of which, Jeppe Juhl, was a man running for the New Conservative party of Denmark.

A major newspaper in Denmark, Ekstra Bladet, ran a straw poll to see who would win the upcoming election and Rasmus Paludan polled at 24%, the highest amount of any party in Denmark.

Snaphanen, one of the arrested and a 67 year old, Danish Blogger, was taken away by SIX police officers in handcuffs for sharing the video of the Scandinavian girls who had been decapitated by muslims in Morocco.

Jeppe Juhl, who was also arrested for sharing the video, said he had never even seen it let alone shared it, and they had arrested him also in connection for his work with New Speak, at least two years ago.

Thank you Tania G for the insights onto these events in. Denmark today, which show the real totalitarian, anti-democratic beliefs of the current Danish Prime Minister.

For the root story on this, please click here.

Crackdown on Islam-Critics in Denmark

I woke up this morning to find this comment by a Dane posted on last night’s news feed:

I thought you may want to know; not sure where to post this, so here it is anyway: This morning, Steen from “Snaphanen” in Copenhagen, Denmark was picked up by six police officers and taken in for questioning in handcuffs, and his computers, hard drives etc. seized. Allegedly for linking to links from other links to links eventually leading to a video of a beheading.

Shakespeare was right. There IS something rotten in the state of Denmark.

I took a quick look at Steen’s Steen’s blog. He has posted — using a borrowed computer — about what happened. He’s not the only one who was rounded up this morning; evidently this was a big day for cracking down on “Islamophobes” in Denmark.

In Denmark! I thought Denmark was different, but evidently not.

This is the closest to home the repression has hit. Elisabeth Sabaditsch-Wolff was prosecuted and convicted, but she was never arrested, nor did she have her computers seized. This is the first time a good friend of mine has been handcuffed and taken away to help police with their enquiries.

I spent many enjoyable hours in Steen’s company on several occasions a few years ago. He put me up in his apartment and introduced me to a number of Danish dissidents, including Lars Hedegaard. Steen is a superb photographer — that was his primary pursuit before he took up Islamophobia. He took the photo at the top of this post in happier days, when I was in Denmark back in 2009, enjoying a meal at a restaurant with a group of Scandinavian dissidents. You can see me sitting at the far end of the table.

[Please read the rest at GoV]

Although this link is meant for New Zealanders, the UK is obviously at the same point or worse and many many nations, Canada among them, are well on the way to this Orwellian dystopia.

So heed the good advice in this series of posts. 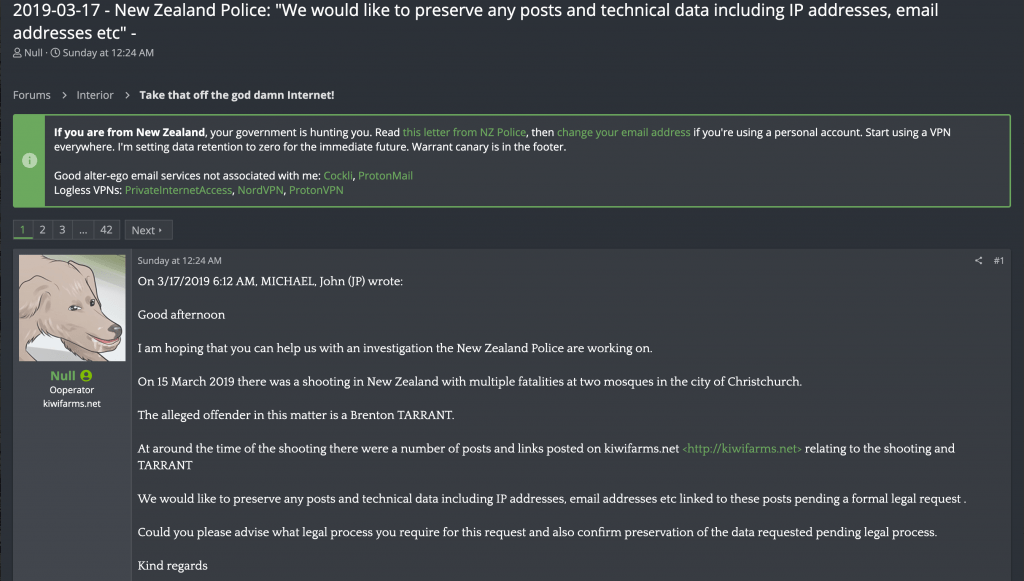