This conflict is more meaningful than what one may expect of a war between two small nations most people have never heard of. This is a proxy war between Turkish people, who are the population of Azerbaijan, and Armenia, where the survivors of the Armenian Genocide by the Turks live. Russia is backing the Armenian Christians and Turkey is backing the Azerbaijani Muslim Turks. This has potential to spread.

This is blatant and ancient war making. very similar to the salting of the Earth, common in ancient wars.

One needs to read the article in full to understand that this act is more than cutting down a few trees. This is an act of war no different than bombing factories that a national economy depends on. And one where it takes three to four generations to rebuild. And that some of these trees are hundreds and hundreds of years old.

Thank you Oz-Rita for this article. There is no way to pretend this is an individual act anymore. This is the muslim world waging war on Europe for the purpose of conquest.

An attack on Greek heritage, migrants chop thousands of olive trees on Lesvos It has been a wild few days on the Greek island of Lesvos. The past few days has seen two gangs of Afghani immigrants battle each other and African immigrants ridicule and cough on police in the midst of the coronavirus pandemic, as reported by Greek City Times.

However, if these incidences were not enough, 5,000 olives trees were cut from their roots by illegal immigrants from the infamous Moria migrant camp, to the north of Lesvos’ capital city of Mytilene.

Olive trees take approximately 65-80 years to reach stable yields, meaning that the destroyed trees are a major blow to the local economy. Olive exports amount to about US$700 million every year to the Greek economy.

Chopping down trees was also mentioned in muslim scripture. The Meccans chopped down palm trees during the siege in Medina, if I’m not mistaken. It was considered an act of war in Arabian culture, with good reason.

Apart from the historic and theological connotations, it’s of course an act of agroterrorism. The whole refugee push is of course economic warfare as well. Apart from the cost of housing these people, it killed off tourism in Greece. Who wants to go to Lesbos now?

Btw, Erdogan supports the BM. I vaguely recall the BM endorsed attacking trees in the past, but I’m not sure.

RAIR Foundation has this write up on the details of this video here.

According to Lebanese reports the Kornet anti-tank missile was fired towards #IDF vehicles along the border with #Lebanon. #Israel's military says following attack residents within 4 km of the border stay in homes and open their shelters.

Israel retaliated with airstrikes within Lebanon

Video: Hizb’allah targets what it claims is an Israeli military facility

Now #breakingnews #Israel says “IDF: Initial report- A short while ago, an anti-tank missile was launched from Lebanon towards Avivim. Details to follow.” See map and photo from Israel TV #happeningnow #BREAKING pic.twitter.com/xjXsUhD1v0

Our reader Yucki tells us that the missile used, a Kornet, is an expensive and effective, laser guided missile with a range of of 5.5 Km (About 3 miles)

Around one hour ago, I held a consultation with the Chief-of-Staff and with IDF generals. We were attacked with several anti-tank missiles. We responded with 100 shells and firing from the air by various means. We are considering the next steps. pic.twitter.com/VTPRH7p4X3

The following tweet is from the state propaganda organ, one which Trudeau’s brother worked for or still works for, Press TV:

Aerial footage shows one of the oil tankers targeted in the Sea of Oman#SeaofOman pic.twitter.com/mdvEPPT3J4

CNN: Suspected attack on tankers in the Gulf of Oman

The two tankers were targeted Thursday morning in the Gulf of Oman, the same waterway where four commercial ships were attacked last month.

The attacks have ratcheted up existing tensions in the region, where Iran has long been at loggerheads with Saudi Arabia and the UAE — most recently over the civil war in Yemen.

(The Yemeni war is a war of manifest destiny by Iran, using their proxy, the Houthis as they would, Hizb’allah in the regions near Israel and abroad.) 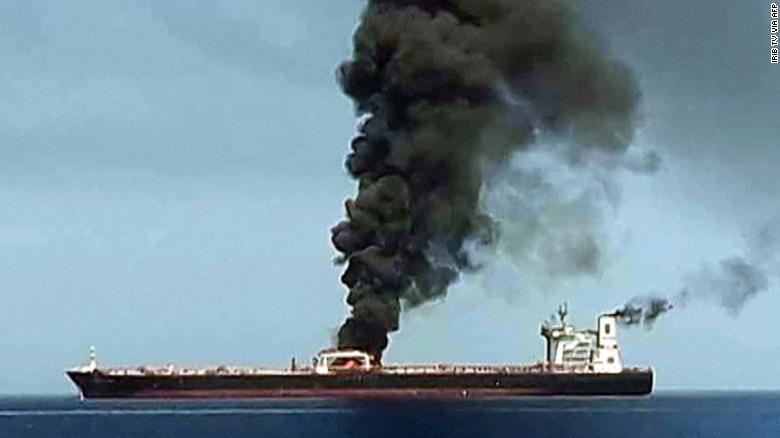 Now The Express, which expressly says it was torpedoes:

Responding to the incident, the Prime Minister’s spokesman said Britain is seeking to establish the facts of what happened while the UK Maritime Trade Operations, which is part of the Royal Navy, urged “extreme caution”.

Front Altair, owned by Frontline, was carrying 75,000 tonnes of petroleum product naphtha and was headed to Taiwan.

Click over to the Express article, it’s the most informative so far.

Thank you Johnny U., Wrath off Khan, and all who sent in materials on what could be a flashpoint event.

Defense Secretary Leon Panetta is accussing Iran’s paramilitary force of an intensified campaign to destabilize the Middle East by smuggling antiaircraft weapons to its militant allies.

Iran’s export of so-called manpads — antiaircraft missiles that can be carried by a single person — represent what Panetta called a dangerous escalation.

“There is no question when you start passing manpads around, that becomes a threat—not just to military aircraft but to civilian aircraft,” Panetta told The Wall Street Journal in an interview describing shifting threats to the U.S. as he prepares to leave his post. “That is an escalation.” TEL AVIV – Advisers from Iran’s Revolutionary Guard Units are in the Gaza Strip helping to oversee the firing of long-range rockets by jihadist groups there, according to informed Middle Eastern security officials.

The information comes as the Iranian-backed Islamic Jihad group today claimed responsibility for what it said was missile fire at Tel Aviv. The organization has claimed it fired Iranian Fajr-5 missiles aimed at Tel Aviv.

Earlier today, one rocket launched from the Gaza Strip landed in Rishon Letzion, some seven miles south of Tel Aviv. About three hours later another explosion was heard in the Tel Aviv area.

No casualties were reported in either Tel Aviv or Rishon Leztion.

Since yesterday, Israel’s Iron Dome anti-missile defense system has intercepted 105 rockets, while 274 rockets have struck Israel, mostly in cities near the Gaza Strip.

The escalation began last week, when Hamas fired more than 120 rockets and mortars into Israel in a four-day period.