I have only watched the first few minutes. But confident enough to post it now as his movie, “Hillary’s America” was so phenomenally good, that I am confident this will meet standard, and be worth all of our time to watch it.

Here is the description from the originating Bitchute page:

In his most important film yet, Dinesh D’Souza presents an EXPLOSIVE exposé of the socialism, corruption and gangsterisation that now define the Democratic Party. Whether it is the creeping socialism of Joe Biden or the overt socialism of Bernie Sanders, the film reveals what is unique about modern socialism, who is behind it, why it’s evil….and how President Trump can and must stop it.

The entire core of downtown was blocked off by police and whatever all those brown uniforms are that say police, but obviously are not a civilian force. They in fact did, what the truckers were accused of doing. Blocking streets completely and making the downtown core inaccessible. In fact the protestors did none of those things for the whole three weeks.

The streets always had a lane open for emergency vehicles, and people could come and go from hotels with at least as much ease as a normal day in Montreal or Toronto. Certainly NYC.

We were there doing interviews and at the various protest areas and at no point was commerce interfered with. Well that’s not quite true. The mayor of Ottawa, Jim Watson, ordered all businesses to close in order to inconvenience the protestors. So yes, commerce was affected, but had they done what the truckers asked, open up and not ask for passports or made people mask up, they would have had the best 3 weeks in years.

No doubt authorities blame the protest for the loss of business. The first sign of the authoritarian state is that it operates on lies, and works very hard to protect those lies. Usually at the expense of the citizenry in every way expense could be measured.

Today, on my way to photograph the giant gate blocking Sussex from Rideau st. a petite Romanian woman approached us and said, “I’m from Romania. I have lived your future. See you in 50 years”.
I knew what she meant. But she turned to explain anyway. “Fifty years” she said, “is how long it will take before you get your basic freedoms back”. 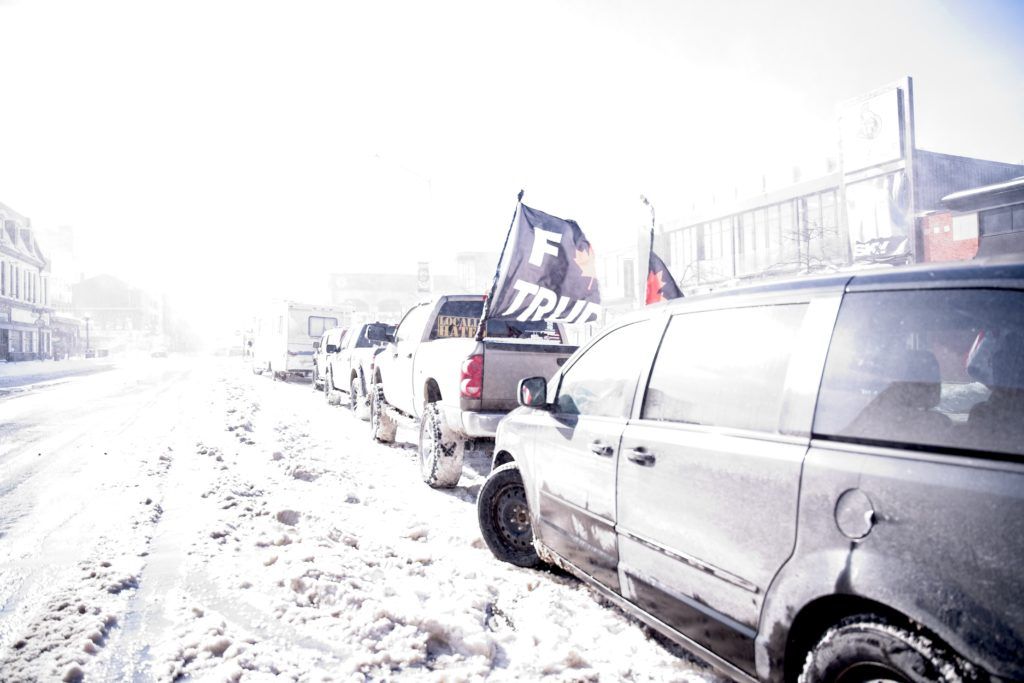 There’s a rumour going around that they’ll start again on the 10th. of August when Jacob Zuma has another Court appearance.
By us, down here in the Western Cape, it’s still “quiet” (if you discount the daily Crimes).
We’ll see.
What he forgot to mention is that Law-abiding South Africans CAN NO LONGER buy guns or can apply for gun-licenses for Self-defense.
Thanks to George Soros and his Minions.
Meanwhile the corrupt South African Police is selling Arms to Gangsters.

Gov Ron Desantis of Florida is one of the greatest public officials in the USA-Brilliant, courageous, extraordinary competence, enormous integrity and high morals. What a man! https://t.co/VjEYoUQ95F

I think dems are done with the elections. They dont plan on winning. They are planning on scorched earth, civil war, anything that can hurt as many people as possible cause they won't be in power for a very long time after this and they know it.

Below, a link to the whole thread. Below that, an addendum to the thread that is quite an interesting video of Donald Trump

One last point about the Portland Antifa death-squad murder of Aaron J. Dickinson:

For all you folks talking about what YOU'D do, these killers picked out a target, murdered him, and escaped in 14 SECONDS.

Let me tell you what that means. pic.twitter.com/uQ2yIGkPhH

I hadn't seen @realDonaldTrump's comments when I figured out that the murder of Aaron J. Danielson was carried out by the first death squad in American history.

He's on it. HE COULDN'T HAVE ANTICIPATED DEATH SQUADS.

Why doesn’t this story mention that Kyle’s buds prevented a gas station explosion that would have killed everyone there?

See 0:53 of the video, they literally tried to push a flaming dumpster into gas pumps. https://t.co/pqgLAFpn4c

Here are some links and videos to what is said to be militiamen shooting back at attacking communist insurgents. Hopefully this will encourage authorities to reopen schools soon so students have something better to do.

There are many more at the link embedded at the top of this post. Also:

This appears to be the actual shooting of two communist insurgents masquerading under the false flag of concern over Black American history.

No doubt there will will be much more on this as the day progresses. But we can thank them all for one thing.

These students come communist insurgents are basically Trump voter mass production lines. We can all be deeply grateful for that. Even if the Democrats manage to get away with massive mail in cheating, the chances of President Trump winning a second term, and not just a win, but a mandate, are very high.

Meanwhile, Portland City Hall is smashed up by communist insurgents.

I don’t know what the Mayor and Council is hoping to be leader of after all this, but maybe they should listen to the words for Hurt.

1. Some of the tweets from Portland tonight. ANTIFA is firing lasers into the eyes of police, and launching incendiary projectiles with Lacrosse sticks

U.S. Marshals spoke with NBC about the antifa violence perpetrated against officers protecting federal property in Portland. Some have been badly injured by explosives, rocks, concrete & much more. Rioters are trying to break inside the courthouse & burn it down. pic.twitter.com/lNRDzo6JNq

Gabriel’s grandmother says she didn’t know he was at riots in Portland. He told her he was helping peaceful protesters and had “protected a girl” from violence. That would be this viral moment: https://t.co/fittqp6uef pic.twitter.com/EpTXQYp5eG

I reported last night that some people were burning Bibles at the antifa/BLM protest in Portland. Here is video: pic.twitter.com/K5WK5qNYlA

(No Korans though. I bet if rumours were started about ANTIFA burning Korans, we would suddenly discover how much truth matters to ANTIFA which rely on dishonesty as their prime weapon against realty. And suddenly it would be so wrong to hurt the feelings of [certain] religious people. On the other hand, if the rumour played out, the Islamic community might solve this little problem in Portland.)

Below, ANTIFA gets help from the oldest tactician, Hu flung Pu.

“Bricks, batteries, frozen water bottles, sling shots with ball bearings and even feces were among the homemade weapons thrown at a group of federal marshals in Portland, Oregon, who described a daily war zone during recent violent protests in the city.” https://t.co/O9TBvPhKTc

As violent protesters start fires in downtown Portland, police responded to a shooting where at least 150 rounds were fired. There has been a large uptick in shootings & homicides in Portland since @tedwheeler abolished the Gun Violence Reduction Team. https://t.co/4gp1IieSnH

Several weeks ago antifa absolutely destroyed that public toilet facility in downtown Portland. It was mostly used by homeless people and the city had to close it because there was glass all over the ground and the walls were broken. https://t.co/lzJavkklnM

If you only read MSM stories of the past month, you'd think federal officers just showed up in Portland for no reason. @laralogan explains how part of downtown had already been under attack night-after-night & that there were many attempts by rioters to burn down the courthouse. pic.twitter.com/1c7fiPH0vQ

Every-time Laras Logan pops up it provides an opportunity to repost the clip of her saying that the entire media circus in the US is so bankrupt, that the only way you can get a Pulitzer prize is if you never say anything which is an actual threat to the powerful. We see more evidence of that every day now in Canada and the USA

What was that about? An exercise in police humiliation by De Blasio? https://t.co/nrpYXTRO8h

This interview was done on June 17, 2020 on what is going on inside the occupied zone called, “CHAZ” but there is a lot of relevant and not otherwise known information here.

We did another one today about the killings inside that occupied zone which will be posted today.