Thanks to Pym Purnell on Twitter for sending me this story: 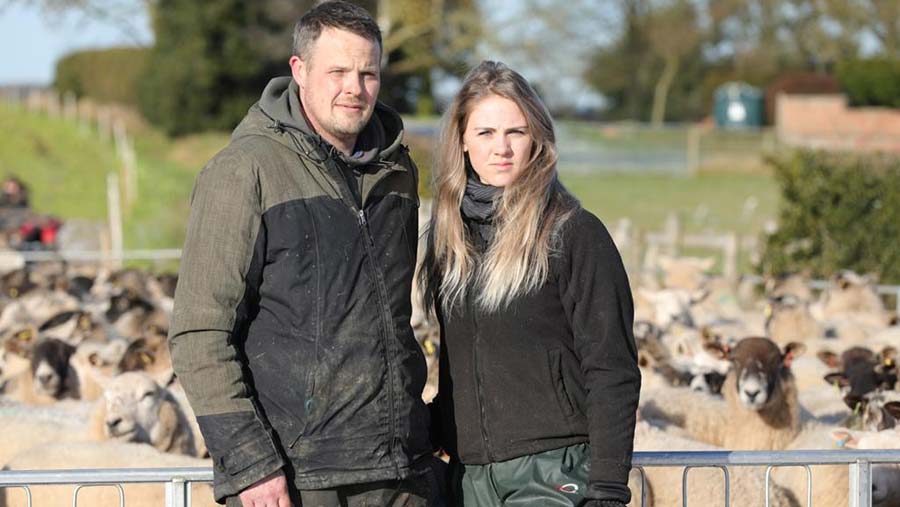 A sheep farmer watched in horror as two men slit the throat of one of his in-lamb ewes in a field in broad daylight.

Adam Neachell and one of his workers were moving an electric fence in a field of turnips when they noticed the flock of Texel cross Mule ewes acting out of character.

“It is a big 120-acre field and the sheep were running towards us, as if there was a dog in with them,” said Mr Neachell, of Shrubbery Farm, Aldridge, West Midlands.

They hopped on a quad bike to investigate and came across two men with one of the ewes, with her throat slit and dying.

“The men were Asian, aged about 25-30 and wearing dark clothing,” Mr Neachell recalled. “As soon as they saw us, they ran off.”

What shocked Mr Neachell was that it was 11.30am and the field has a public footpath running through it, which dozens of walkers use every day.

In the UK, “Asian” usually means muslim. It is highly unlikely these men were Japanese for example. Pym Purnell asked the following:

I recall cases where animals had their throats cut as preperation for possible terrorist attacks https://t.co/KV0mOxrYzM

We of course, have no idea if this action is a prelude to anything. But the video below from 2014 appears to be a prelude to this event in any case:

First this terrifying video from Rebel Media from July, 2016:

Secondly, one of the most widely read articles Vlad ever did. An original translation by Bear, from a French veterinarian about the health issues connected to Halal slaughter and why.

Thirdly, a Facebook link dedicated to the halal food scam in Canada, much of which applies to the USA.

And last, something I have been looking to find for some time now.

There is an app that will let you identify halal certified foods that doesn’t add your personal information to an Islamic organization’s data base. Its called Buycott.

Below is the logo from the various application sources. You install, and select OTHER in the campaigns tab and one of the options is boycott halal, which does have many thousands of registered users. You then have to ID yourself with either Facebook (bad idea) or an email which means you can use any email you can access but doesn’t have to have your name. Gmail addresses are pretty much impossible to trace I am told.

I have no personal experience with this yet, but plan to try it out the next couple of weeks at the places I typically buy food stuffs. Here is hoping its all good. 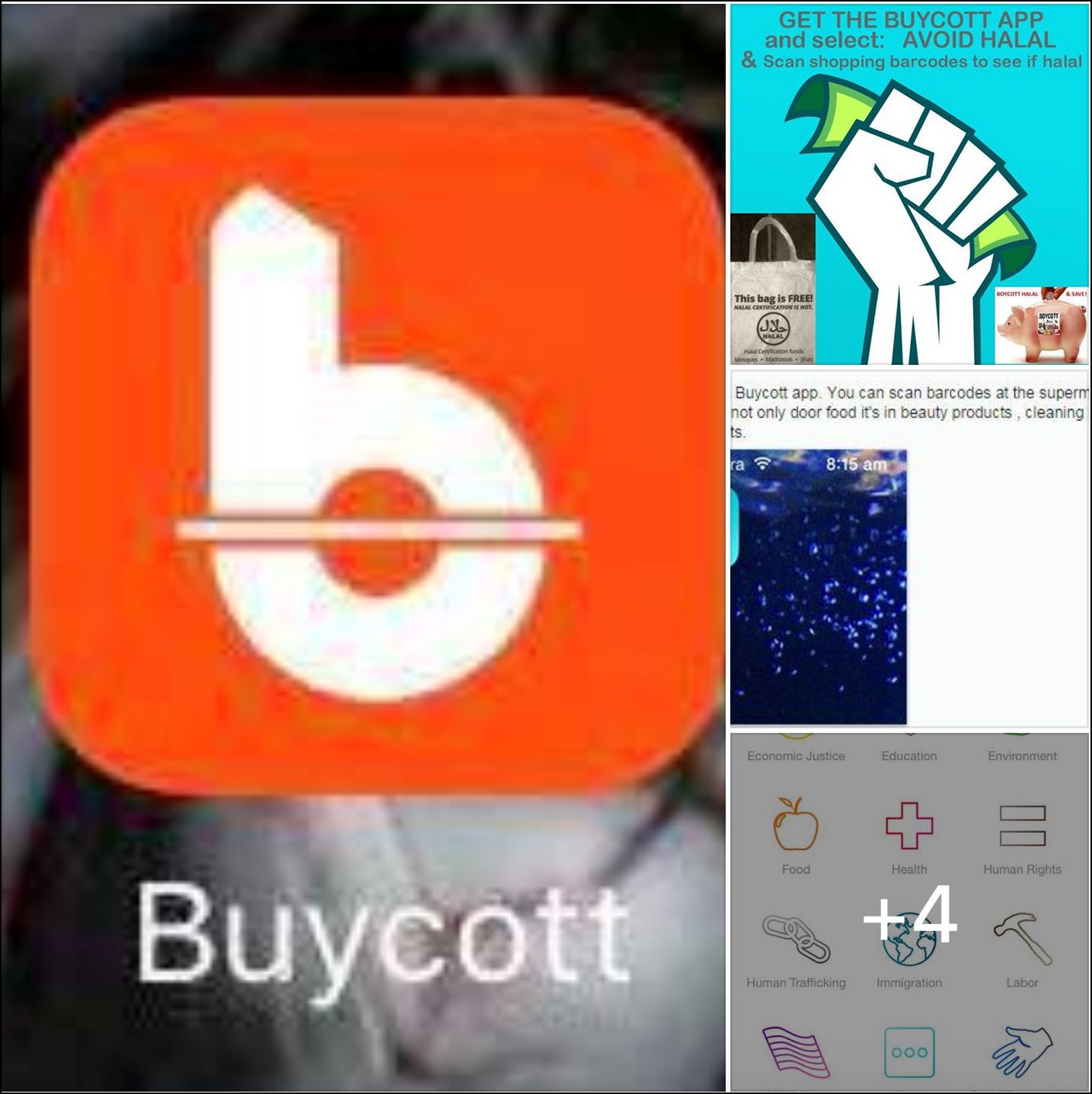 This is a difficult one to introduce. I was told initially that this is Macron’s go-to muslim for all matters islamic. But can’t find a link to that easily, possibly because I do not speak French.

But I did find that he is head of an organization that looks like its running a pretty typically variation of the halal extremist scam. The trick is, to get the authority to take massive amounts of money from the halal food racket, use it to build mosques to spread Islam and avoid all obstacles to the process, in fact even have the government grease the wheels for you in a nation which is officially and legally secular, by claiming its all an effort to keep out ‘Islamistism extremism.’

He also appears to be “head of the observatory against Islamophobia”. 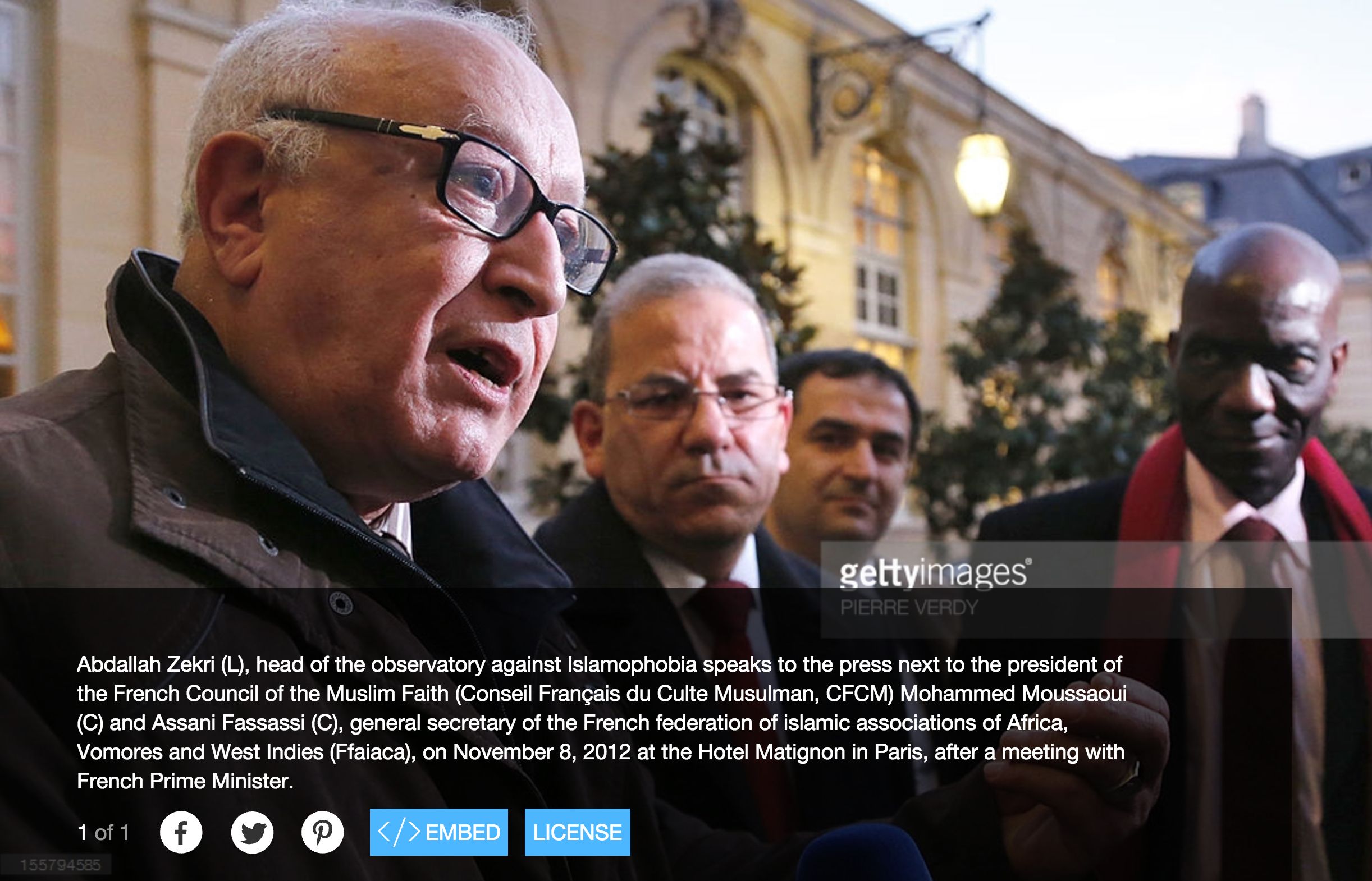 And here is what he has to say about assimilating into French culture on French TV:

HALAL CERTIFICATION – The Unpalatable Facts from Q Society of Australia Inc on Vimeo.

Article here at The Rebel

I definitely appreciate any Western jurisdiction attempting any kind of push-back against the destruction of indigenous culture as codified by laws etc. from Islamic incursion. I also recognize that there is not the political will to deal with reality. Reality of course meaning that no culture has been a threat generally speaking, to Western nations and typically more an augmentation in many ways, except for Islam.

Consequently, these jurisdictions might think instead of enforcing the laws they already have, which would effectively shut Islam down. After all, you cannot preach from koran if it is illegal based on hate crimes, sedition laws, conspiracy, encouraging rape and theft and so on, all of which are core doctrines of islamic teachings.

But instead, Western jurisdictions have been using wink wink rules as work arounds, ready to throw Jews and Sikhs etc. under the bus in order to deal with the problems Islam creates without appearing to be ‘racist’ or in some way, anti-multicultural.

Quebec of course is working on its Charter of Values. As I have stated before, the reason it not only won’t work but will actually accelerate the influence of Islam in Quebec, is because other religious people who are successful and beneficial to Quebec overall such as doctors and teachers and other professionals, will regretfully pack up and move to the US and English Canada. It won’t be that hard for them and life will improve a lot here in Ontario for their presence.

The Muslims of course, will not only, not move, but the moment that the new law begins to be enforced, a muslim woman in a burka will txt a few friends who will txt a few friends and next thing you know, Quebec will look like France, fires will be set, people will be killed, police stations will be set alight and the gutless politicians will agree that the charter will only be applied to safe groups like Jews, Hindus, Sikhs, Hare Krishnas and any other visible  religious group and muslims will be a long way towards a major triumph as the dominant political group in Quebec having seen many of their self made enemies leave the province due to this legislation, which I guarantee you muslims will be immune from.

Denmark now appears to be trying something similar with a new ban on ritual slaughter.

Jews overall are statistically law abiding. They will move or get meat sent from outside Denmark. The Muslims however, will likely not miss a single halal burger or lamb kabob.

At the end of the day, you need to admit to what the problem is, then deal with the problem. You cannot solve the problem of communist infiltration and subversion by for instance, making Russian illegal in public and you cannot stop Nazism by banning black uniforms. You stop these things by enforcing laws you already have which these ideologies most definitely break constantly and with boldfaced impunity.

It is also worth mentioning that Jewish ritual slaughter is not in any way similar in method or intent to islamic slaughter. I expect there will be comments soon detailing exactly why this is so. Muslims stand next to sheep for ritual slaughter Photo: Reuters

Jewish and Muslim ritual slaughter will be illegal in Denmark starting on Monday, by order of Agriculture and Food Minister Dan Jørgensen.

The Netherlands attempted to ban shechita, but a deal was brokered, legalizing the practice in 2012.

On Monday, all slaughter that is not preceded by stunning will be forbidden in Denmark, rendering it impossible for ritual slaughter to be carried out according to Shar’ia or Halacha, Danish station TV2 reported on Wednesday.

“Animal rights come before religion,” the minister was quoted as saying.

Slaughterhouses will no longer be able to apply for an exemption from pre-stunning.

While Denmark’s 6,000 Jews currently do not practice shechita, instead importing kosher meat from abroad, the ruling does affect the country’s Muslim minority.

We need to do this

Volunteers of Q Society of Australia will hand out free shopping bags this Saturday 31st August, at selected supermarkets around the country. The bags, which state “Halal certification schemes fund mosques, madrassas and jihad,” are designed to generate discussion amongst Australian consumers.

While the re-usable shopping bags are free of charge, the imprint and info material in each bag alerts consumers that halal certification schemes are not free and have developed into a hidden Islamic goods and services tax.

Q Society’s spokesman Andrew Horwood points out: “Halal food itself is not of concern. Nearly all our food is naturally permissible to Muslims and observant Muslims can make food of unknown origin halal by proclaiming ‘bismillah’ over the food before eating. What is of concern for Australians are the recently invented certification schemes, designed to permeate the supply chain from feeding trough to super market shelf, including non-food goods and services.” Torben Mogensen, vice president of Hvidovre Hospital, says no patients have complained about the hospital’s decision to serve only halal meat (Photo: Scanpix)
Hvidovre Hospital has introduced halal meat to its menu for the sake of Muslim patients. The hospital’s decision to serve only halal-slaughtered beef to all of its patients is being met with criticism.

Everyone should do this.