China Threatens to Throw America ‘Into the Mighty Sea of the Coronavirus.’

China is threatening to wreak havoc on America’s drug supply amid the Wuhan coronavirus outbreak. Thanks to our globalist elite and especially missteps during the Obama-Biden administration, Beijing has the power to do just that.

In an article in Xinhua, one of the Chinese Communist Party’s mouthpieces, Beijing threatened that it can impose pharmaceutical export controls after which America will be “plunged into the mighty sea of coronavirus.”

The damage to the Andrea Victory looks about 11 feet or 3.4 meters across. pic.twitter.com/vlEde7x8ww

Look for a special edition of Barry Webb’s weekly interview series tonight on Iran, as understood from Arabic press.

“Madness in great ones, must not unwatched go.”

North Korea, which has launch facilities for its missile program on its west coast, reportedly launched the rocket during the night to avoid surveillance.

South Korea’s defence ministry said they could not confirm the contents of the report but said the North was considered ready to launch more missiles at any time.

The report came as the US ambassador to the UN warned that North Korea was “begging for war” and the United States’ patience has almost run out.

Calling on the UN to impose the “strongest possible measures” against Pyongyang, US ambassador to the UN Nikki Haley said: “The time has come to exhaust all diplomatic means before it is too late.

“Enough is enough. War is never something the United States wants.

“We don’t want it now, but our country’s patience is not unlimited.”

North Korea said nuclear tests are “gift packages” to the United States and that more will follow.

Han Tae Song, the ambassador of the Democratic People’s Republic of Korea (DPRK) to the UN in Geneva, made the comment during a UN-sponsored Conference on Disarmament today.

The warning comes two days after his country detonated its sixth and largest nuclear test.

“The recent self-defence measures by my country, DPRK, are a gift package addressed to none other than the US,” Han told the Geneva forum.

U.S. officials are closely monitoring an ongoing meeting between senior North Korean and Iranian officials that comes on the heels of a nuclear test by Pyongyang, according to senior Trump administration officials and other sources who expressed concern that North Korea is helping to put the Islamic Republic back on the pathway to a functional nuclear weapon.

However, it also has renewed fears among U.S. officials and foreign policy insiders about Pyongyang’s long-standing relationship with Iran, which centers on providing the Islamic Republic with nuclear technology and know-how.

Thank you Richard, M., Tundra T., Wrath of Khan and all who sent in materials. More to come.

This is an interesting video on the subject:

Quake in North Korea may have been nuclear test

Reuters gave the location as 55 kilometers north northwest of Kimchaek, citing U.S. Geological Survey information. There were no immediate reports of damage or casualties, the news agency said.

Japan stated that if it was confirmed to be a nuclear test, it would be “absolutely unacceptable”, whatever that means. 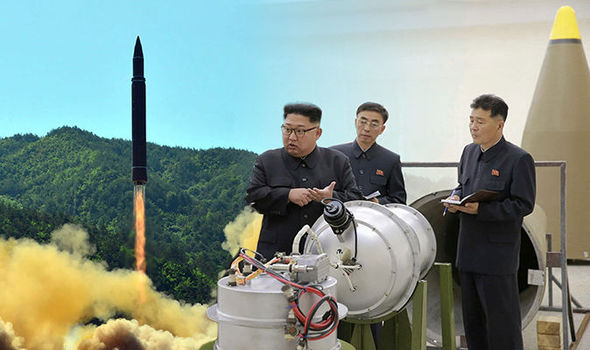 North Korea has said it has developed a more advanced nuclear weapon that has “great destructive power” amid World War 3 fears.

Kim Jong-un’s state media mouthpiece NCNA declared the hydrogen bomb’s power is adjustable to hundreds of kilotons and can be detonated at high altitudes.

It also boasted that these latest components would allow the country to build as many nuclear weapons as it wants.

KCNA reported: “Kim Jong-un said he felt the pride at the indomitably bolstering up of [North Korea’s] nuclear forces despite a great price as he watched the Juche-oriented thermonuclear weapon with super explosive power mad

(Richard points out that this debate is an important one to follow, as its post WW2 policies exist for a reason and to change those has meaning.)

TOKYO (AP) — Japan is debating whether to develop a limited pre-emptive strike capability and buy cruise missiles – ideas that were anathema in the pacifist country before the North Korea missile threat.

With revisions to Japan’s defense plans underway, ruling party hawks are accelerating the moves, and some defense experts say Japan should at least consider them.

Japan has a two-step missile defense system, including interceptors on destroyers in the Sea of Japan that would shoot down projectiles mid-flight and if that fails, surface-to-air PAC-3s on land.

“There’s no question that this is another provocation, it’s reckless,” he told Sky news. “They seem to be moving closer towards a hydrogen bomb which, if fitted to a successful missile, would unquestionably present a new order of threat.”

Pyongyang conducted its sixth and most powerful nuclear test earlier on Sunday.

He said Britain’s preference was for a diplomatic solution and that none of the military options relating to North Korea were palatable. (Reporting by William James; editing by John Stonestreet)

(And the beggar’s preference is for a horse. But if he sits around wishing for one he likely will never achieve his destination. Palatable or no, a solution that does not result in a nuclear strike against a city outside North Korea must be done. It is possible to eliminate the nuclear potential of NORK and take out the administration without destroying all the slave labour camps and so on which a lot of the more or less innocent North Korean populations live in. But something permanent has to be done. Something with strategic certainty.)

6. ‘We’ll see’: Trump refuses to be drawn on whether US will attack North Korea for detonating hydrogen bomb but warns America may stop ‘ALL trade with any country doing business with Kim’

Both economic and military action could be in store for North Korea after its detonation of a 100-kiloton nuclear bomb, Donald Trump has hinted.

The president remained tight-lipped amid claims that America is gearing up for military intervention as he left church on Sunday morning.

When asked whether the US would make a preemptive strike on North Korea after its nuclear test caused a 6.5-magnitude earthquake, Trump – who was leaving church – only said: ‘We’ll see.’

But in a pair of tweets afterwards, he said: ‘I will be meeting General Kelly, General Mattis and other military leaders at the White House to discuss North Korea. Thank you.

“North Korea said Sunday that it successfully conducted a test of a hydrogen bomb meant to be loaded onto an intercontinental ballistic missile (ICBM).

The announcement was made on state-run television. A news reader called the test a “complete success” and said the “two-stage thermonuclear weapon” had “unprecedented” strength. North Korea’s leader Kim Jong Un ordered the test, according to the announcement.

It is the rogue nation’s sixth, and most powerful, nuclear test.

President Trump responded on Twitter, commenting on North Korea’s continuing “hostile and dangerous” actions toward the U.S. and its being a “great threat and embarrassment to China.” The president also said South Korea’s “talk of appeasement” with its northern neighbor won’t work.

Thank you all for your diligence in following and posting these links. Unless something major happens concerning Korea in the next few hours, please post all Korea related news to the comments under this post.

This just in. I have no idea what she is saying, But I would not buy a used car from her.

It is alleged to be the new hydrogen bomb in the hundred kiloton range the NORKS tested.

North Korea fired a ballistic missile that passed over Japan early Tuesday, and Prime Minister Shinzo Abe had strong words about its gravity.

Abe said the missile was an unprecedented, serious and grave threat to Japan. The Japanese prime minister also said he would ask the United Nations to up the pressure on Pyongyang.

Japanese broadcaster NHK reported that the North Korean missile broke into three pieces and fell into the sea.

There is a great deal in the comments on this right now. It is well worth checking out. Yesterday’s as well.

Editing and subtitling is going to take up a lot of time today, but there is fantastic material on the way,

So please do check the comments linked above. Turkey may have put the match to the tinder box which is the large numbers of Muslims in Europe.

Wrath of Khan made this explanatory video. The only thing we are uncertain about is what may have been an error in another site’s referral to the Turkish foreign minister as the family minister, which is echoing on many sites.

I believe however that it is the Turkish FM who was banned from speaking in the Netherlands.

Turkey has a family affairs minister:

Egri Nok clears it up:

both have been banned from speaking in the Netherlands.
Both the Foreign Minister, and after he was banned, the Family Minister.