This is a generational copy of the video. Hopefully a proper video shows up soon and Ill replace this one.

And to make matters worse, when this guy dies of a heart attack, they will list it as a Covid death.

It would be unbelievable if it weren't so believable. #CCPLiedPeopleDied https://t.co/SqhgjUIud7

The COVID-19 pandemic caused by the novel coronavirus SARS-CoV-2 has led to over 910,000 deaths worldwide and unprecedented decimation of the global economy. Despite its tremendous impact, the origin of SARS-CoV-2 has remained mysterious and controversial. The natural origin theory, although widely accepted, lacks substantial support. The alternative theory that the virus may have come from a research laboratory is, however, strictly censored on peer-reviewed scientific journals. Nonetheless, SARS-CoV-2 shows biological characteristics that are inconsistent with a naturally occurring, zoonotic virus.

(Full report available at link above)

(I believe since we did this on July 2, more explosions have happened in Iran)

Flinders’ University Professor Nikolai Petrovsky has told Sky News there are fears a bat virus discovered by the Wuhan Institute of Virology was tampered with to create the COVID-19 virus.

It is believed the closest genetic relative of COVID-19 is the RaTG13 virus founded by researchers from the Wuhan Laboratory in 2013. Professor Petrovsky said the possibility of the RaTG13 being manipulated to make COVID-19 is clearly a concern. He told Sky News host Sharri Markson there are differences between the bat virus RaTG13 and COVID-19. “There are several other elements that don’t seem to fit with (COVID-19) being a direct descendant of the bat coronavirus”.

“Either a whole lot of viruses have mixed in nature to get these new elements or the other potential explanation is someone has put those elements directly into the original bat virus”. Professor Petrovsky said scientists across the globe still can’t properly determine how COVID-19 emerged. “Was it a natural event or a scientific experiment gone wrong”. 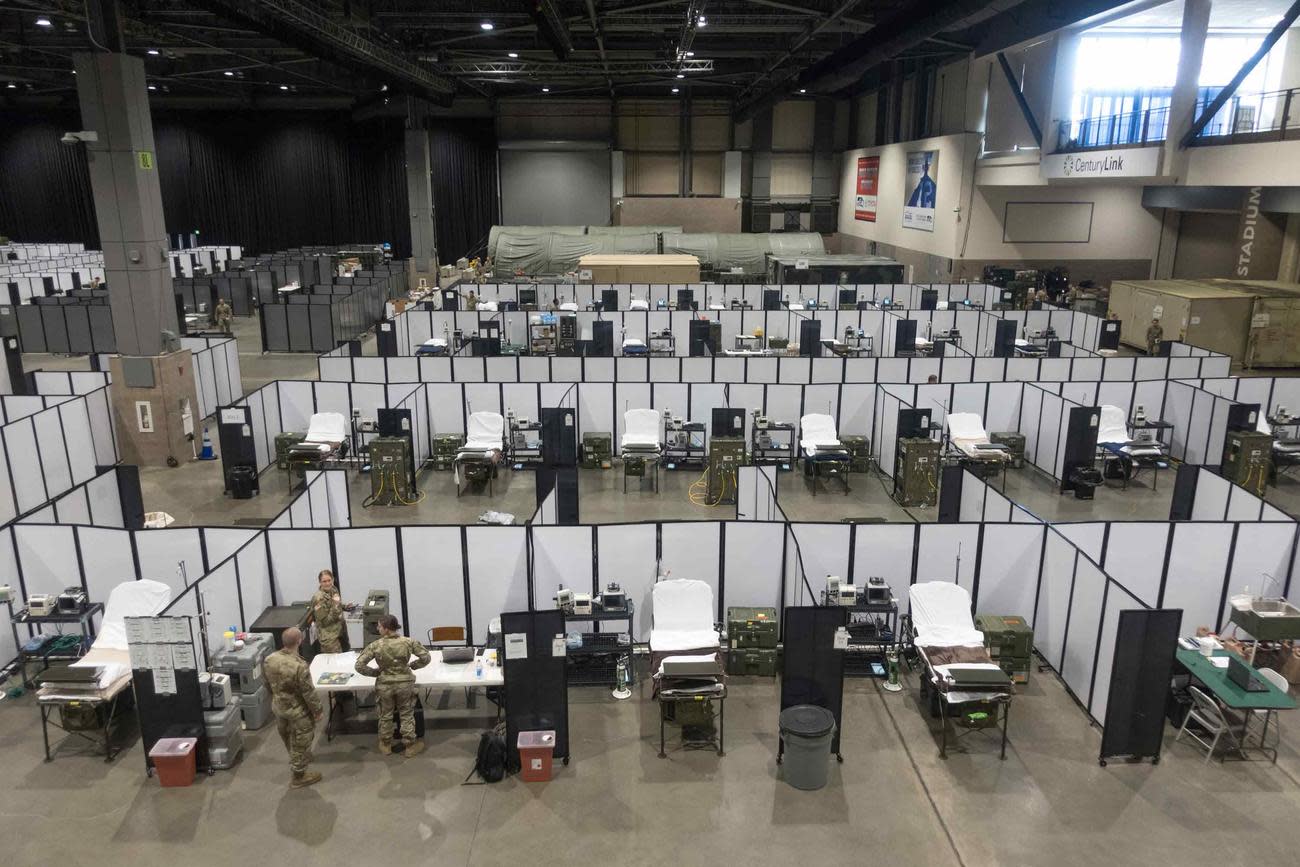 The hastily built field hospital set up by the Army in Seattle’s pro football stadium is shutting down without ever seeing a patient, so the service can shift resources where they’re more urgently needed, Washington state Gov. Jay Inslee said.

Medical equipment at the CenturyLink Field Event Center is being returned to the Federal Emergency Management Agency for use elsewhere, but the governor cautioned against reading too much into the move.

“Don’t let this decision give you the impression that we are out of the woods,” Inslee said in a statement Wednesday. “We have to keep our guard up and continue to stay home unless conducting essential activities to keep everyone healthy.” Washington state saw the first coronavirus death in the U.S. on Feb. 29.

(Going out? Leave your phone at home while its still legal to do so)

7. And yet USA records over 2K deaths in a day attributed to Wuhan Flu

8. Bosonaro’s Brazil is defiant of the shut-down of all civilization. (That is the Brazilian PM at the drug store)

9. About those Chinese made face-masks

Best not to thank anyone for this post. GG though, sent in the Civic Hospital footage.

In the 1970s it was fashionable to go to midnight showings of Reefer Madness at theatres where all who smoked dope would indulge in it, while watching anti-Marijuana propaganda. In those days you could still smoke in theatres and while dope was illegal, it was seldom prosecuted or cause for arrest.

The movie shows a fellow who never smoked before being talked into trying it for the first time. He has one puff, if memory serves, and goes on a raping and killing spree which ends in permanent madness.

This was a great laugh for all the teens in the audience puffing away knowing this was stunningly bad 1950s “right wing” propaganda.

Human nature being what it is, people would watch the movie, know it wasn’t true, and assume therefore, there is no danger in smoking THC products at all, and many went on to ruin their lives with marijuana, destroying their ambition, ability to really focus or concentrate hard, and sometimes getting late onset schizophrenia now believed to be connected to long term THC use. It also doesn’t seem like any of them are smarter than they were when they started smoking either.

Humans often think in binary extremes. We are told X. X isn’t true. So Y must be true but for sure not X.

Showing these videos in this post that suggest that we are over-reacting to the Wuhan Flu does not mean there is no danger. It means it wasn’t what we thought it was exactly, or the measures we are taking are actually working extremely well.

Here is another hypothesis about the state we are in now:

‘This appears to be an artifact. A man made virus, very likely a weapon. We don’t know what it does exactly. But what we do know is, its profoundly contagious. It is lethal but we don’t know exactly how lethal. It can be spread by people who are not symptomatic, or are pre-symptomatic, making it much more dangerous than Ebola or SARS which is so visible in its contagious stage, that its easy to isolate the sick for the benefit of the rest of the population.

Which means that it could kill more people overall, even if less by percentage.’

We had a sticky post for several days that showed this was exactly the case by a Ph.D. in biology, with a follow up post to come showing more evidence of same.

Leaders, like President Trump, might find themselves in a position where they had to respond as they did, given that information, if this is anywhere close to the truth.

In essence, we got hit by a Chinese WMD with serious and important unknowns and the value of explaining this to a general public where the media is hostile to the president and the US in general in some ways, is questionable.

If this is the case, we should know enough about it by now to swap strategies.

Continue the sequestration of the elderly, the Type 1 diabetics or uncontrolled type II, heart patients and immune-compromised for their own sake and get everyone else back to work.

The cost of a prolonged shut-down of the supply chain of everything is not predictable entirely. But no projection of it is good. At least not for humanity.

Not many will know of this man, but he left China many years ago and established himself in New York where he has dedicated his life to raising awareness in the West of the dangers of Communist China.

This is his latest message.

If humankind doesn't take down the #CCP, it will release more viruses. #CCPVirus pic.twitter.com/Zt9NUVbfRZ

This is a Sticky Post for a while. Its importance also merits a little more time at the top we think. Please scroll down for newer posts for now. Thank you.

A Ph.D in biology familiar to the authors at VladTepesBlog, took the time and effort to really look at some of the available documents on the nature of the Wuhan strains of the Corona virus now shutting down the world.

There are a number of anomalies that differentiate it from all other strains of Corona which deserve a closer look. One of which, and one of several, is the insertion of segments of the HIV virus which is not found in any other strain of Corona anywhere. But there is much more to cause concern and raise suspicion that this is really a WMD bioweapon from the Communist Chinese government.

Below, the executive summary of this Dr.’s investigation.

A summary of some of the research papers used to write this summary can be downloaded here.

could SARS CoV-2 be a bioweapon?

On January 31st, Indian scientists (Pradhan et al.) posted on a research website a not-yet-peer-reviewed paper called “Uncanny similarity of unique inserts in the 2019-nCoV spike protein to HIV-1 gp120 and Gag.” They looked at the genomes of all of the versions of the new coronavirus now known as SARS CoV-2 that were available at the time (there were 28) and also the genomes of all coronaviruses whose genome sequences were published in databases (there were 55). The different versions of the SARS CoV-2 virus differ in generally less than a dozen nucleic acids in its approximately 30,000-nucleic acid genome. Such mutations are typical of viruses. Pradhan et al. found the most closely related virus to be the SARS CoV virus that caused the 2002-03 pandemic.

The authors thought it was unusual to find short stretches of amino acids in unrelated proteins and expressed the opinion that it was unlikely the inserts were there by chance. When they modelled the structure based on the available structure of the SARS CoV spike protein they found that the first three inserts folded together to constitute part of the binding site that recognizes the host receptor. Insert 4 was located at the junction of the S1 and S2 subunits of the spike protein. (When the virus binds to the host cell, its spike protein S is cleaved by proteases on the host cell into subunits S1 and S2. S1 is needed for binding to the receptor and S2 is involved in fusing the virus membrane with the cell membrane.)

Pradhan et al. also thought that the insertions would provide additional flexibility to the glycoprotein binding site by forming a hydrophilic loop that may facilitate or enhance virus-host interactions. (The spike protein is a glycoprotein, meaning there are sugar groups attached to it.)

Pradhan et al. (2020) withdrew their paper within days of prepublication after it was criticized for methodological reasons.

END_OF_DOCUMENT_TOKEN_TO_BE_REPLACED

PePi sent in this video interview of a virologist by The Epoch Times. I have not seen it yet, but PePi explains that this is a really worthy video. The guest is a viral-weapons expert.

The video below is from a 2015 science show in Italy called, Leonardo. Watch and judge for yourself.

More can be seen at RAIRfoundation.com

A couple of related titbits:

2017: Inside the Chinese lab poised to study world’s most dangerous pathogens

2017: Bats in China carry all the ingredients to make a new SARS virus

(We have been working with Brad to improve the technical quality of these videos. Hopefully you will all find the video and audio quality much better than usual)