Yesterday D.tube was down and wasn’t delivering videos at all after about 9:00 PM ET. It appears to be fine now though.

We did three separate interviews with Brad Johnson on the state of the AG Barr investigations and from a point of view of rooting out corruption and restoring a constitutional democracy, the news is very good. For lots of people entrenched in the government and who have been working to do it harm, the news is less good.

Direct link to focus on Clinton

Direct link to focus on treason

Direct Link to focus on Ukraine Satellite imagery from Google Earth taken on November shows hundreds of Russian main battle tanks at a new military base on the outskirts of the Kamensk-Shakhtinsky.

The large-scale military base only 18 kilometers away from the border with toward rebel-held territory in eastern Ukraine.

Images show hundreds of main battle tank like as T-64 and also T-62M, while a thousand military trucks, artillery systems and tankers are located slightly higher.

Russia has been ramping up its forces near the border with Ukraine since August and now poses the greatest military threat since 2014, the year Moscow annexed Crimea, the commander of Ukraine’s armed forces told Reuters in an interview on Tuesday.

Thank you Brad Johnson for taking time away from your schedule while in Georgia to discuss this situation with us.

An adviser to Ukraine’s interior minister said a passenger plane carrying 295 people was shot down Thursday over the eastern part of the country, the Associated Press is reporting.

Anton Gerashenko said the plane was flying at an altitude of about 33,000 feet when it was hit by a missile fired from a surface-to-air launcher, according to the AP.

May 03 2014 UKRAINE – RT – ‘Get out, fascists!’ Angry Kramatorsk citizens drive Kiev forces away

“Get out you fascists! Locals appear to be chasing away Ukraine military in the area.

Hard to tell who the totalitarian empire is. Russia or the EU in this case.

1. This one is interesting. Note the fellow at the right next to the guy with the Geek shirt. If he isn’t a jihadi he certainly goes to the same barber that they do. Turn this one up to 1080 with the little gear at the right and pay attention near the end. 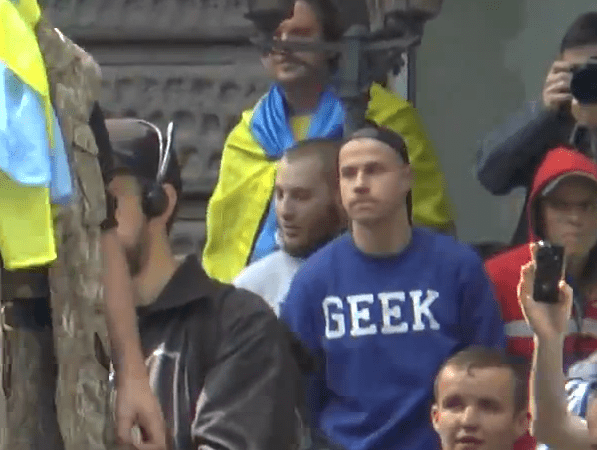 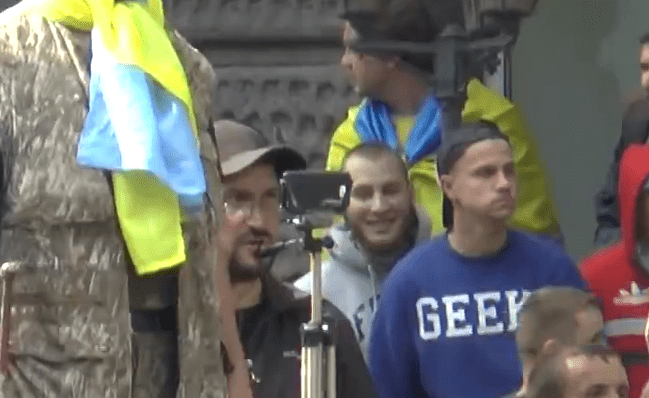 Maybe its just in fashion in Ukraine now to get tanned and groom like that. The crowd is chanting insults to Putin.

2. Ukraine: Scores have died during clashes in Odessa

Thanks M and Don L for all the links.

Fire and smoke. No idea where or what but it looks a lot more escalated

More fires in the streets

1. This one from India is hard to follow but it involves a lot of killed people in what appears to be muslim Vs. everyone else.

Suspected tribal rebels have shot dead 22 Muslims in attacks in tea-growing state of Assam, where tension has run high during a drawn-out national election, officials said on Friday.

Police said they suspected militants from the Bodo tribe were behind the latest attacks late on Thursday into Friday in a region where tension between ethnic Bodo people and Muslim settlers spilled over two years ago into clashes in which dozens were killed and 400,000 fled their homes.

Bodo representatives argue that many of the Muslims are illegal immigrants from neighbouring Bangladesh encroaching on their ancestral lands,

In one of the incidents, eight people were killed by a group of suspected Bodo guerrillas, said officials.

In another, three members of one family including two women were shot dead, and a baby was wounded, said a senior police officer in the state’s main city, Guwahati.

2. Ukraine: Odessa on the edge of all-out street war

3. This is alleged to be videos of 30 dead supporters of Russia in Ukraine. Something weird about it though

1. AFP – Shots fired as locals stand up to Ukraine troops in the east

1. This is alleged to be a Neo-Nazi march video: Lvov remembers Ukrainian Waffen SS division Members and supporters of the Svoboda party joined a march in Lvov on Sunday in commemoration of the 14th Waffen Grenadier Division of the SS, initially formed from Ukrainian volunteer fighters.

2. VICE Journalist who has been sending generally excellent daily reports from Ukraine, speaks about his captivity by unnamed kidnappers.

According to the german magazine DER SPIEGEL, the Ukraine supplies syrian islamistic rebels with rifle typs of SKS Simonow. The ukrainian state concern Ukroboronprom sends the weapons over Germany to Syria. It is not clear, to which place in Germany the weapons are transported, the german foreign department denied a statement. The rifles were send to Germany for “modifications”, an official said to SPIEGEL.The magazine citated the american Think Tank Jamestown Foundation (connected with US-Spy Agencies). The Think Tank believes, that the weapons are sent from Germany to syrian rebels. Jamestown speaks about a number over 54 000 rifles for jihadists supplies only in 2011 and 2012. “They could be used for covert operations in syria”, Jamestown said to SPIEGEL.The german government doesn’t want to investigate the shipments. The lawmaker of the german parlament, Sevim Dagdelen said: “It is scandalous, that the german government can’t say  anything about the actual place of the weapons.” It would be very possible, that the weapons reached jihadists in Syria.

Ukraine’s Defense Ministry says a grenade fired from a launcher caused an explosion in a helicopter at an airfield outside the eastern city of Kramatorsk, wounding a pilot. (April 26)

7. Secretary Kerry’s Threats and Accusations Against Russia Over Ukraine

1. Ukraine government says truce is over.

2. Russia: In Ukraine “Americans are running the show” – Lavrov

(No embed code available for above video. But can be seen @YT)

3. Odd video on the 600 US servicemen headed to Poland. For some reason.

Russian forces conducted military exercises in the south-western Rostov region near the border with Ukraine on Wednesday.

More to come. Thanks M for all the links. Please post any new material for today on Ukraine below in the comments everyone.

anyone else think this is odd behaviour from a fuel tanker? I mean, I might expect one explosion, or possibly two if the fuel tank explodes separately for some reason from the main cargo area but this is plain weird.

OK I have to take off my tin foil hat on this one. I had the suspicion that it was covert delivery of munitions to the Ukraine front by Russian forces but I have been well and truly corrected.

OK, this is how it started.It turns out that the vehicle was an Isuzu truck, carrying gas canisters…