This is the view this site has taken from the start. We ALL should draw Mohammad. We ALL should wear T shirts with cartoons that offend. That will end this thing, or bring it to a head soon enough that we can win any conflict.

Pretty much 100% of social housing go to migrants.

Press release from the office of Geert Wilders: 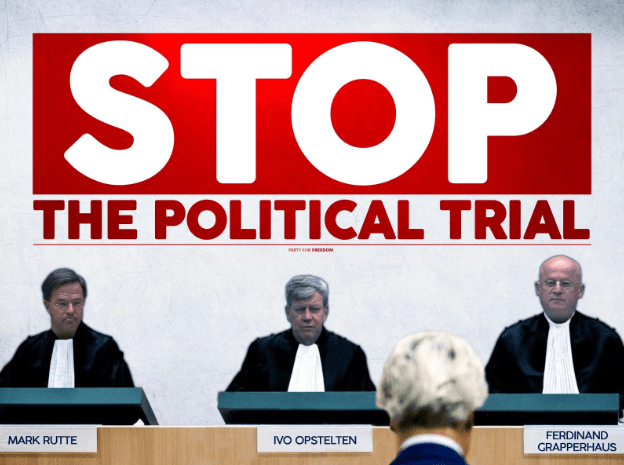 Tomorrow morning in the extra-secured court at Schiphol airport the trial against Geert Wilders resumes.

Earlier  this month Geert Wilders called for a parliamentary inquiry into the political interference in his trial.

Wilders’ defense team obtained a notary statement from a former official of the Department of Justice in which the official declares overhearing a conversation between the then Secretary-General and then Minister of Justice Opstelten.

According to this remarkable statement Opstelten explicitly said that the public prosecutor should proceed to prosecute Wilders because ‘he is getting in our way’.

Dutch media reported about contact between Opstelten and the head of the public prosecutor about the case in 2014.

They also mention Opstelten was keen to see Wilders prosecuted.

Current Minister of Justice Ferd Grapperhaus still refuses to send documents detailing the meetings –which had been officially denied – to parliament.

The documents will remain secret, the minister told MPs.

The original appeal began in May last year but Wilders’ legal team successfully applied for the judges to be removed after alleging bias.

Both Opstelten and former prosecution chief Herman Bolhaar have recently been heard behind closed doors.

This political interference is unworthy of a western democracy and this trial must be stopped!

Geert does not go far enough in this press release in our opinion at Vlad Tepes.

The foundational machinery of democracy is that there is an opposition party that expresses different views on government policy than the actual party in power, and they show why policy is either bad policy which is working to a bad end, or good policy that does not work properly. They then take it to the people and another vote happens.

Geert found himself being tried, over and over again, because he opposed the government policy on unchecked, illegal, mass immigration of a people who simply find enlightenment values anathema. They not only do not conform to them, but work triple shifts to destroy them, often alongside Western communist groups and governments.

Geert’s opposition to immigration policies (which are illegal in the first place) got him levelled with the absurd charge of ‘racism’, something which must never be a criminal offence in the first place, as the definition changes as needs be.

Acquitted the first time, the Dutch judiciary borrowed a trick from the EU, and just tried him again. Something Erdogan seems to be fond of as well now.

This attack on opposition people and parties like Geert’s PVV and Marie Le Pen’s party which recently changed its name, is nothing less than a far left, totalitarian plot to undermine democracy and the will of the people, (now renamed “populism” with a negative word-rank) to retain their heritage and identity, not to mention the fruits of the labour of their ancestors.

It is the Marxist notion of globalism. Pernicious and destructive.

I hope we hear a lot more about this gathering. If memory serves, macros was elected because he stole Le Pen’s talking points and people thought they were getting a nationalist without the stigma leftists had painted onto Marine. I think the next time, if they are allowed to vote in France again and have it counted honestly, they are ready for someone who will actually work to preserve French interests.

The video below appears to be a counter demonstration by leftists who oppose the Czechzit sentiments of the main group.

Czech Republic: Prague protesters greet Le Pen and Wilders at right-wing meet
National Rally leader Marine Le Pen held a press conference alongside the leader of the Dutch Party for Freedom’s Geert Wilders in Prague on Thursday, to support the Freedom and Direct Democracy Party’s Czech-Japanese leader Tomio Okamura ahead of the European Parliament elections.
Okamura branded European Commission President Jean-Claude Juncker a ‘notorious alcoholic’ as both Le Pen and Wilders attacked multiculturalism and globalisation.
On the same day, Okamura’s party organised a protest against the European Union in the centre of Prague.

Pro-EU demonstrators staged a counter-protest under the reported name ‘Olympics of Noise’ which attempted to drown out the Okamura-Le Pen-Wilders meeting.

Written Parliamentary questions of Wilders, De Graaf and Beertema (all PVV) to the Minister of Social Affairs and Employment  and the two ministers of Education, Culture and Science:

Have you heard about ‘another history forgery in Dutch schoolbook’ *?

What is the reason behind concealing the most important history of Jerusalem (Jewish history) in the VMBO book ‘Plein M’?

For what purpose is a large part of the Jewish history of the Middle East, such as the pogroms and massacres by Muslim Arabs and the expulsion of Jews, as well as the Armenian genocide and discrimination against Christians omitted in the same book?

Do you agree with the history forgery that is committed in the book in question? If so, why and if not, why not?

Do you share our opinion that to conceal, during history and society lessons, the suffering of Jews and Christians in the Middle East – mostly by Muslims – and to conceal the most important history concerning Jerusalem, contributes to the creation of and maintaining a false image concerning Jews and Judaism and thus fosters anti-Semitism in society? If not, why not?

Are you prepared to persuade the schools using the book in question to throw this book in the trash and to ensure that students are taught in a historically correct way about the history of Judaism, the Middle East and Jerusalem? If not, why not?

This is important. This is how, whatever it is we have in the West that has supplanted rule of law, is used to crush opposition to cultural-Marxism. Geert summarizes it well. But the takeaway must be that opposition to leftist policy is now a criminal offence, even when it is the actual job description of the one doing it, and the person was elected by over a million adult citizens to do this critically important job in any democracy.