An original translation from Zeit Online 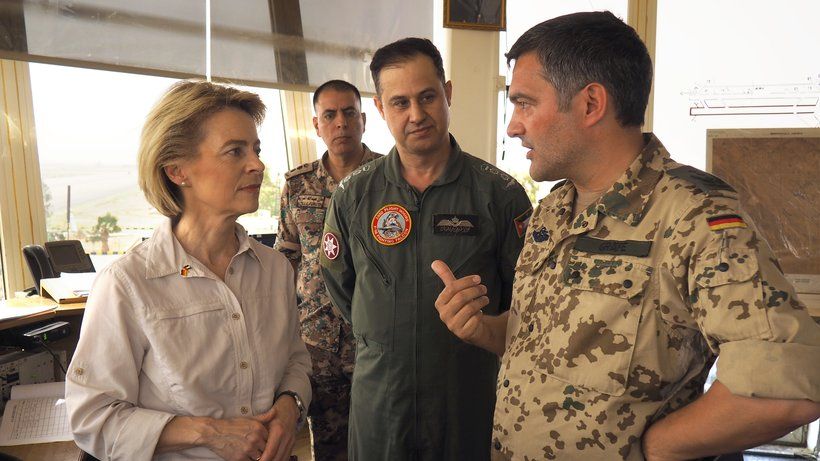 It remains unclear yet if German soldiers in Jordan will be protected from Sharia law. The Federal government had made this demand in the negotiations concerning the stationing of German soldiers in Jordan. But according to Der Spiegel information, Jordan has not yet granted such immunity.
About 250 German Armed Forces soldiers are to be stationed in Jordan from Septeber on, to fly reconnaissance flights against the terror Militia“Islamic State” from there. The Federal government wants them to be protected from criminal prosecution in Jordan, as it partially still is under the Koran-inspired sharia law which also sees death penalty. The jurisdiction of the Sharia courts is limited to certain aspects like family law though.
After withdrawal from Turkish Incirlik, the soldiers are to be stationed on the Jordan base Muwaffak Salti near Al-Asrak. The moving was a decision of the Federal government early June. The reason for this decision was the conflict with the Turkish government regarding visit rights of German representatives at the German Armed Forces soldiers.
“We are still nogotiating the stationing arrangement”, the defense ministry in Berlin comments. They were not expecting a delay of the moving of the “Tornado”recconnaissance jets which is scheduled for October. [“Tornado” is the name of a type of German military jet – translator]
Last year, there had been similar discussions with Qatar. There, a compromise was achieved, according to which soldiers were flown out to Germany, instead of being held responsible before a Qatari court. In Jordan, such compromise seemed unlikely due to the size of the mission, Der Spiegel quotes Federal Armed sources. [6/13/2013 5:05:42 PM]
AMMONNEWS – A group of Jordanian lawyers filed a lawsuit in Jordanian courts against the producer of a controversial anti-Islam movie and against Google, the owner of Youtube.

An indictment decision was referred to the specialized courts on April 28, 2013, with the lawyers citing personal right against the movie “Innocence of Muslims,” which sparked major controversy and violent protests over what many Muslims considered as a major offense to the person of Prophet Muhammad.

The case was also filed against the producer of the 14-minute movie Nakoula Basseley Nakoula, and movie director Alan Roberts.

The indictment decision was also filed against Google, the owner of YouTube, for allowing the movie clip to be published on their site.

Here is the description for these images:

Unrest rising in the South of Jordan. Bedouin militias roaming the south, blocking streets and kidnapping opponent, despite desperate calls by locals for the king to intervene, King remains silent, some say in fear… 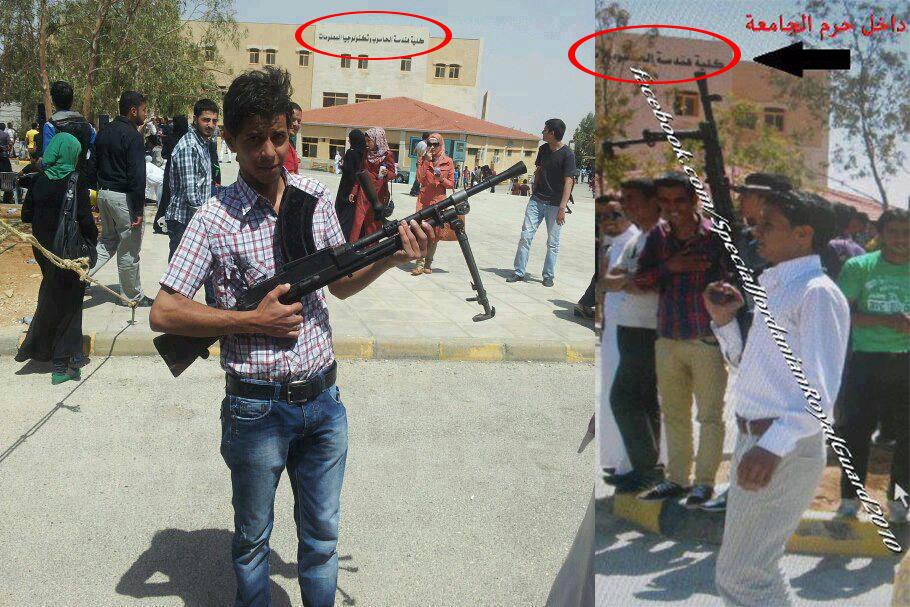 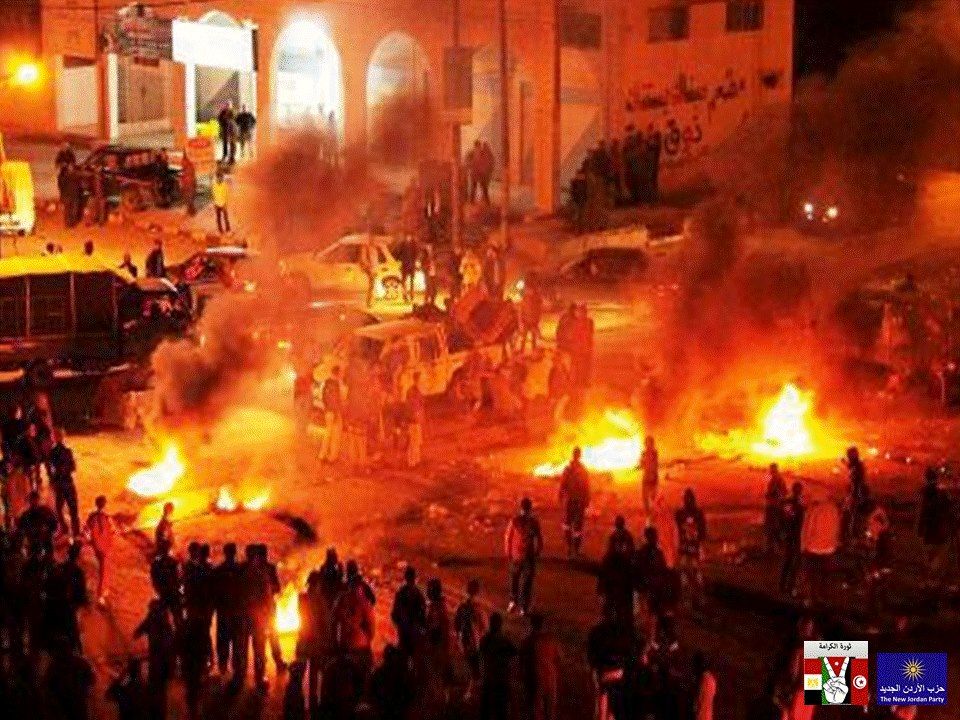 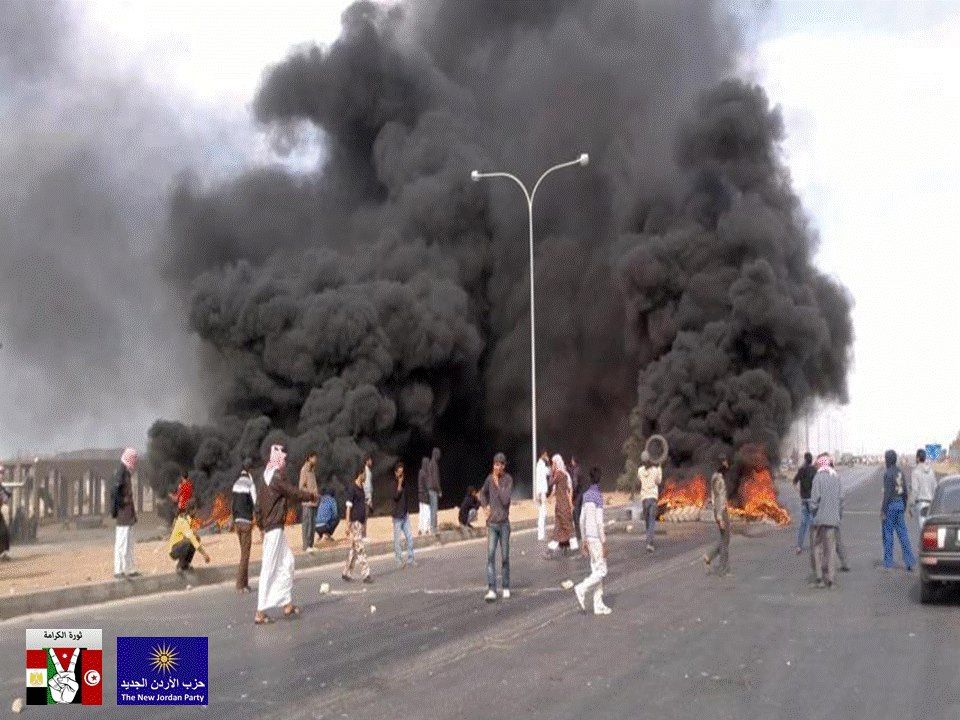 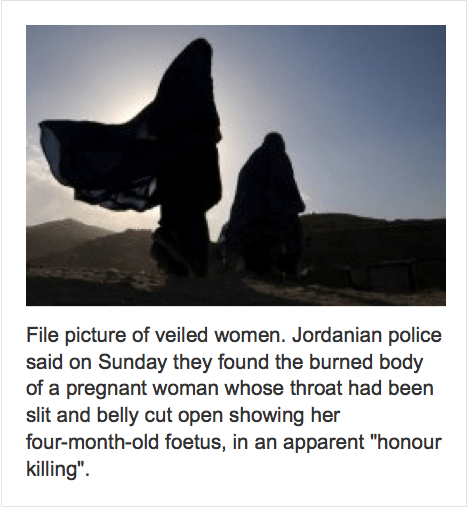 AFP – Jordanian police said on Sunday they found the burned body of a pregnant woman whose throat had been slit and belly cut open showing her four-month-old foetus, in an apparent “honour killing”.

“We found the body of the woman at dawn in Ruseifeh (east of Amman). Her throat was slit in a hideous way. The body was burned after the murder,” a police spokesman said.

“We believe it was an honour crime. The belly of the woman, who was in her twenties, was cut open and we could see her four-month-old unborn child, who was dead too. Investigations are still under way.”

So now he tells us.

The Atlantic Monthly’s Jeffrey Goldberg says King Abdullah is warning the U.S. of the rise of the Muslim Brotherhood. CNN’s Jake Tapper reports.

Monarch in the Middle
http://www.theatlantic.com/magazine/a…

Yeay! First Jordan, and who knows, maybe we can crack down on them in Canada.

That is not an evil goblin from a movie. That is the Muslim Brotherhood leader in Jordan.

The Muslim Brotherhood in Jordan, backed primarily by local Palestinians, has stepped up its campaign to take over the Hashemite Kingdom and the Kingdom is responding in the usual ways by arresting top Brotherhood members and putting them on trial.

Jordanian authorities referred on Sunday a leading Muslim Brotherhood official to a military court for his alleged role in nationwide demonstrations against fuel price hikes amid a security campaign that has resulted in the arrest of dozens of Islamists, DPA reported.

According to a judicial source, Emad Abu Hattab, a senior leader of the Brotherhood’s political branch, the Islamic Action Front, was referred to the country’s military State Security Court on charges of “undermining the regime.”

And the ‘Arab Spring’ moves into the more benign and affluent parts of the middle east. It is almost as if we are setting the stage for WW1 again, + the worst elements of WW2, in order to get…

yep, the truth will do that….

Rumors of a UN decision to re-introduce Holocaust studies in schools run by UNRWA — the United Nations Relief and Works Agency for Palestinian refugees — have raised the ire of Jordanian teachers, who say they will refuse to teach history that “harms the Palestinian cause.”

In a statement issued Monday, the Executive Committee of UNRWA teachers in Jordan responded to rumors that Holocaust studies would be reintroduced this year to the enrichment curriculum on conflict resolution, which is taught in schools operated by the UN agency in Palestinian refugee camps.

“We condemn this decision, which equates the butcher and the victim,” read the teachers’ statement, demanding instead to introduce classes on the Palestinian “right of return” to Israel and the history of the 1948 war with Israel.

Some 2 million Palestinian refugees are registered with UNRWA’s Jordan offices. The UN agency operates 172 schools in 10 refugee camps across the kingdom, serving a total of over 122,000 students.

‘Teaching UNRWA students about the so-called ‘Holocaust’ as part of human rights harms the Palestinian cause … and changes the students’  views regarding their main enemy, namely the Israeli occupation’

Last year, the association of UNRWA employees endorsed a decision to ban the introduction of Holocaust studies in UNRWA schools, Jordanian daily Al-Ghad reported Tuesday, a decision the teachers said was still binding.

“We shall monitor the curriculum being taught under the title ‘concepts of human rights’ [which is] aimed at reducing [Palestinian] students’ awareness of the right of return,” read the statement.

“Teaching UNRWA students about the so-called ‘Holocaust’ as part of human rights harms the Palestinian cause… and changes the students’ views regarding their main enemy, namely the Israeli occupation.”

Since 2009, Hamas in Gaza has actively opposed UNRWA’s attempts to introduce the Holocaust into school curriculum in Gaza, claiming that it contradicted Palestinian culture.

According to Al-Ghad, UNRWA denied any intention of introducing the Holocaust as part of its enrichment courses this year, claiming that it abides by the school curriculum of the refugees’ host countries.

A spokesman for UNRWA was unavailable for comment at time of publication.

Here is an amazing video showing the richness of Jordanian political culture.

For an article with details on this amazing segment, please click here:

(ANSAmed) – AMMAN, NOVEMBER 16 – A man from the southern city of Tafilah killed his sister in public by slitting her throat for being involved in a romantic relation, police sources said on Wednesday.

The 18 year old man attacked his sister in the main bus station of the town, before being arrested, said the sources.

Eye witnesses said medics arrived when the girl was making her last breath as investigation continued to determine other culprits in the brutal attack.

The killer told police he wanted to kill his sister to cleanse the family honour after the victim admitted involvement with a man who wanted to marry her, said the police sources.

The death brings number of women killed in the name of honour to nearly 15 since the start of the year, say officials.

The government promised to adopt an iron fist policy with such cases following campaigns from human rights groups.

But activists say strict social habits make it difficult to eradicate such phenomena.

Killers are often handed a sentence between six months to one year for the murder, say activists.

Amman – A Jordanian criminal court has sentenced a 30-year- old Egyptian to only six months in prison for murdering his Jordanian wife for committing adultery last year, the Jordan Times reported Friday.

The court prosecutor had charged the suspect, whose identity was withheld, with premeditated murder, but the tribunal immediately reduced the charge to a misdemeanour because the defendant committed his crime in defence of “family honour,” judicial sources said.

Another court also sentenced a 30-year-old mechanic to only three months in jail after finding him guilty of murdering his younger married sister, the paper said.

The Tundra Tabloids remembers a certain political analyst from a certain Finnish institute for international affairs, who tried to show that there was a philosophical difference between Salafism and Wahabbism. Fat chance, it’s a matter of splitting hairs. Here they are in Jordan rallying for al-Qaida. KGS The recent days have seen an increase in the activity of the Salafi-jihadist movement in Jordan, which has begun to hold large protests in central locations in the capital. Two protest rallies were held in Amman over the past week, and another is planned for Sunday (March 13, 2011). The Salafi-jihadist activists are demanding the release of their prisoners from Jordanian jails and the implementation of shari’a law in the country. The protests featured blatant jihadist symbols, such as the banner of the Islamic State of Iraq organization (aka Al-Qaeda in Iraq), which has not been seen before in Jordanian demonstrations (see images below).

The first Salafi-jihadist protest, which took place on March 1 outside Amman’s largest mosque, was attended by some 500 people who demanded a pardon for Salafi-jihadi prisoners. They called out slogans against democracy and secularism and in favor of shari’a law and jihad, such as “The Is No Alternative to Allah’s Law” and “Jihad Is Our Path.” According to reports, the demonstrators clashed with police and accused them of being funded by the EU and U.S.

A prominent figure at the demonstration was Abu Muhammad Al-Tahawi, one of the leaders of the Salafi-jihadist movement in Jordan. He is known for his close ties with the movement’s spiritual leader, Abu Muhammad Al-Maqdisi, who was arrested several months ago by the Jordan authorities.[1]