This was delivered on February 2nd, 2019 in Sweden at a Yellow Vest protest that certainly gave the feeling that even the Swedes are awakening.

There are some real gems in this speech. Please focus and watch to the end.

Thank you Tania for sending us the video of this speech.

A few days ago, we published an interview and video of the Lawyer for For Freedom, formerly PEGIDA, Denmark when he was chased away from The People’s House in Copenhagen, as a mixed group of Muslims and self titled, ‘ANTIFA’ alternately screamed, “Jew” and “Nazi” at him.

Tania did something we rarely see activists on our side do short of Jordan Peterson or Milo Yiannopoulos. She took the fight to them.

Although this video is in Danish, where there is speaking, it gives a really solid sense of the extent to which the police felt, having a Christmas march through a muslim area of Copenhagen is dangerous.

Notice the amount of police, armoured vehicles, even a helicopter.

The best information we have so far is from the Danish paper, Ekstrabladet.DK, which says that eight people have been arrested so far for trying to block the Christmas march in a muslim area of Copenhagen. 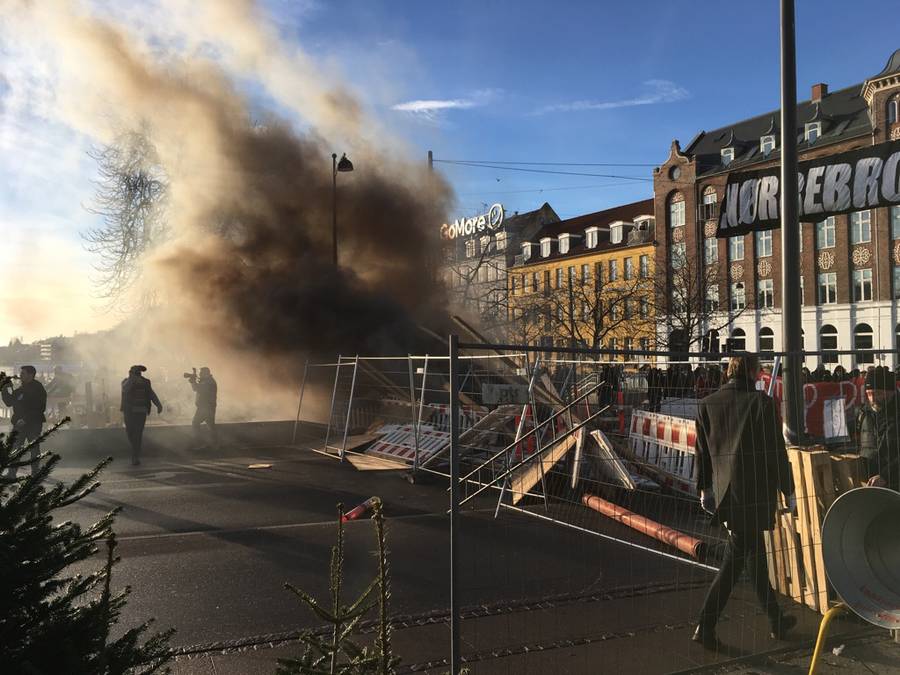 From Google translate of the Ekstrabladet link:

Eight people have been arrested in connection with a demonstration that is currently taking place in Nørrebro in Copenhagen.

It is the group ‘For Freedom’ (formerly Pegida), which is responsible for the demonstration, which started at noon on Israel’s place. Group demonstrates, according to his facebook profile ‘for freedom of expression and the creeping Islamization of Denmark and the West’. Today’s theme is Christmas in Nørrebro, because the local committee in Nørrebro has decided that they will not decorate for Christmas. And it seems Pegida is incorrect as juleoppyntning is a Danish tradition.

As usual, Islam’s useful idiots, or communist’s violent edge, perhaps both, met up with a group of middle aged and genuinly liberal Danish people marching and speaking against the Islamo-fascist group, Hizb-ut-Tahrir in Copenhagen today. 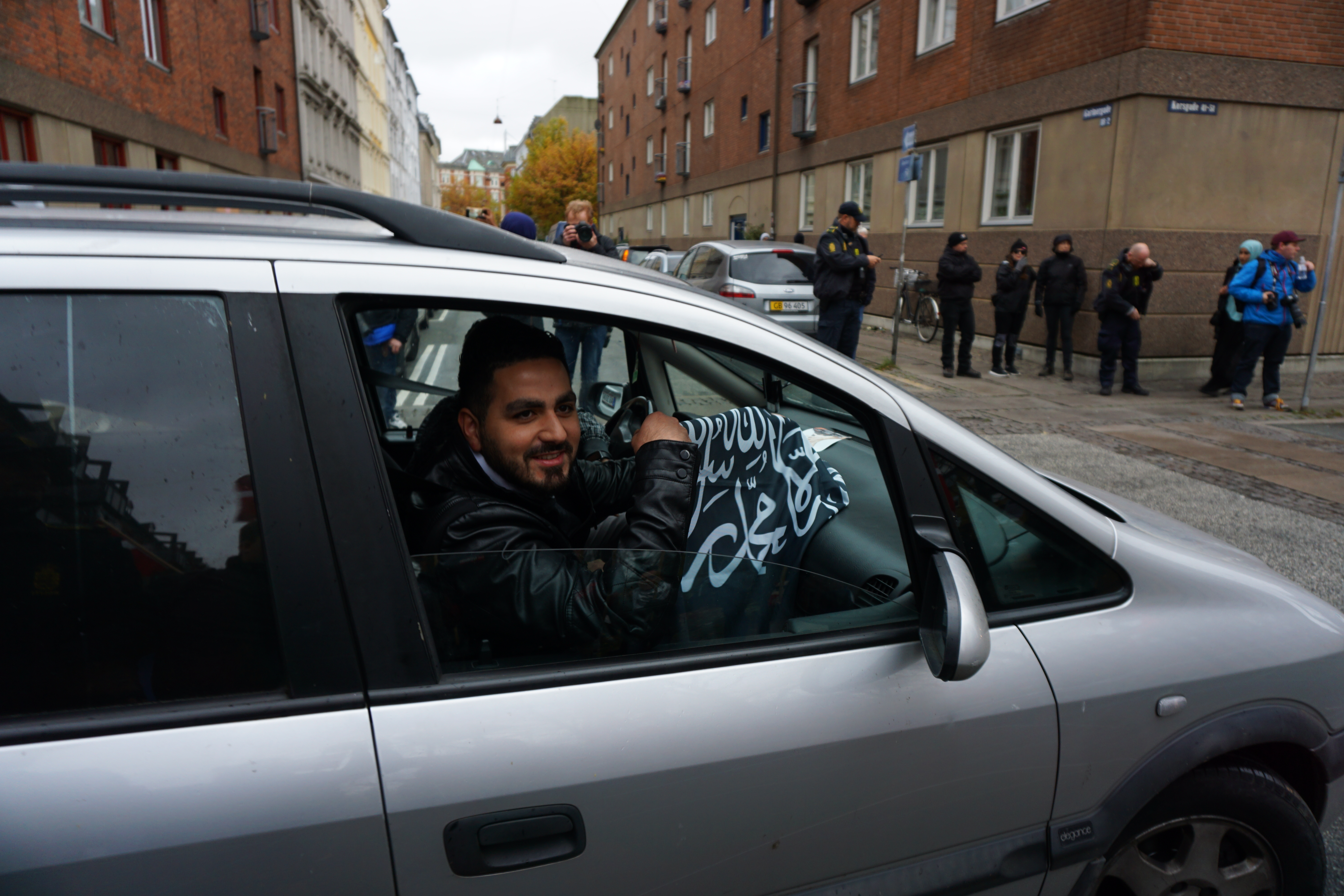 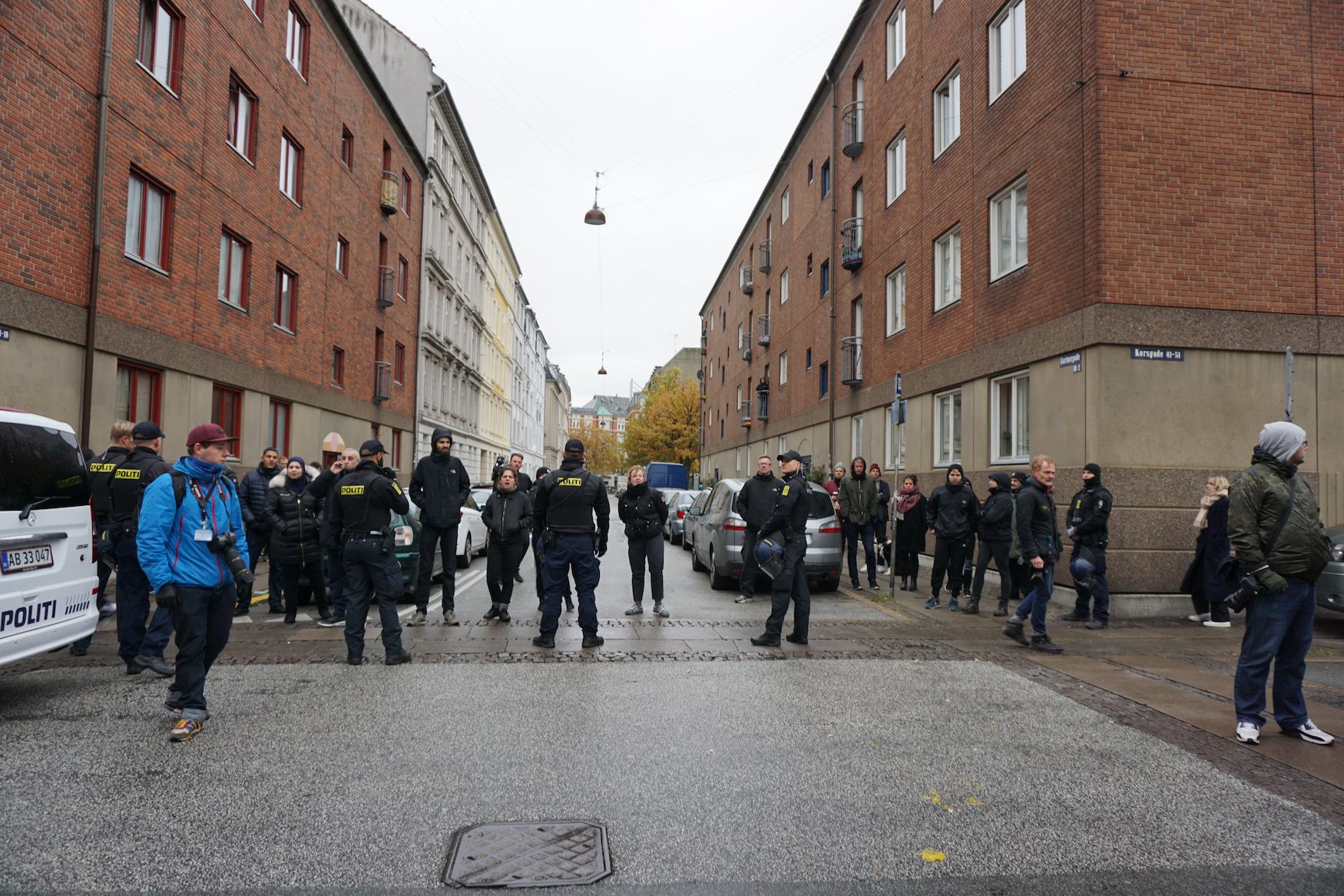 Here is Tania G. Opening remarks and into speech. As the rest become available they will be posted here below. Lars Hedigaard and others will be ready soon. 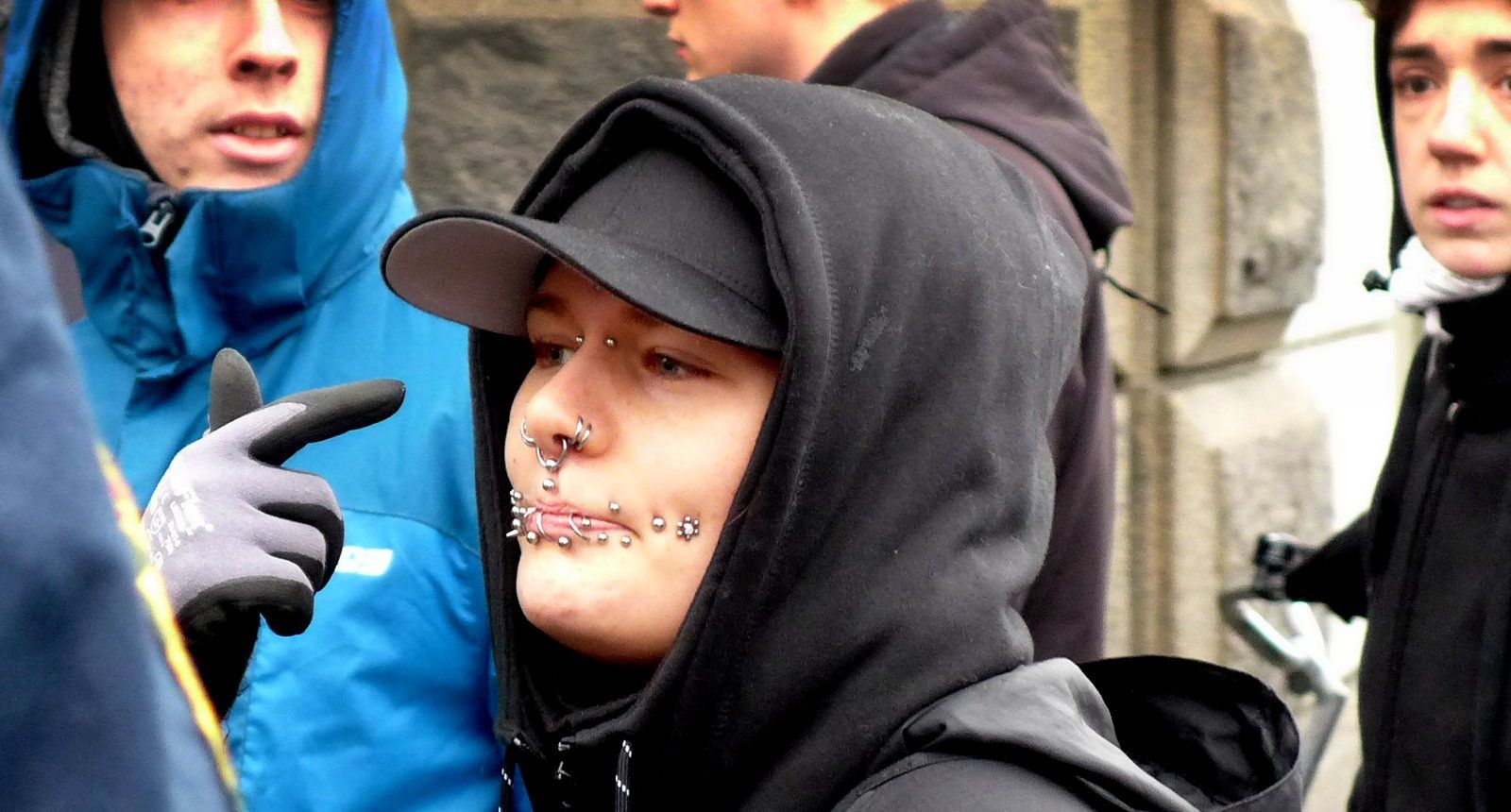 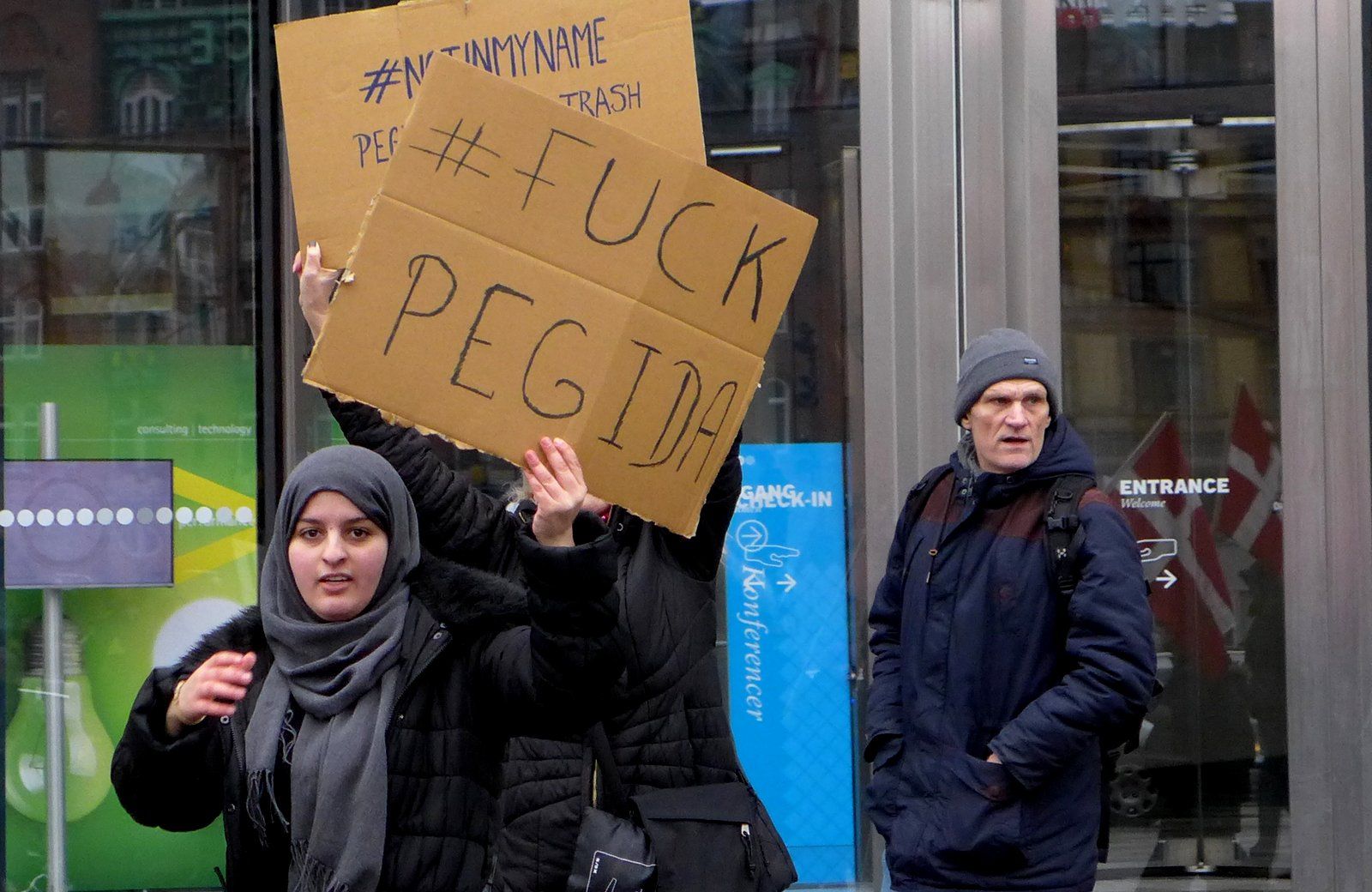 Elegant and articulate muslims object to Europeans preserving their own culture. 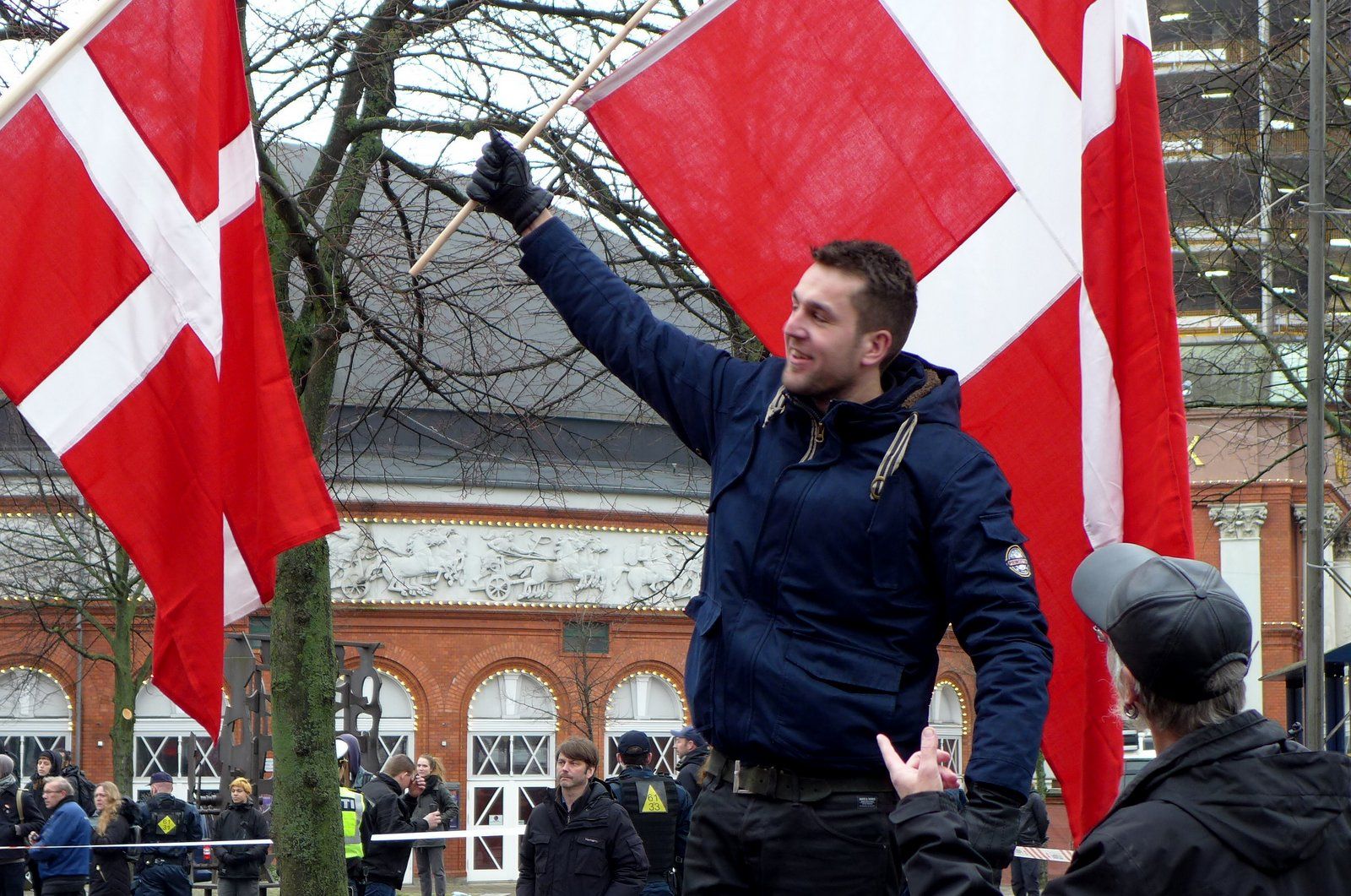 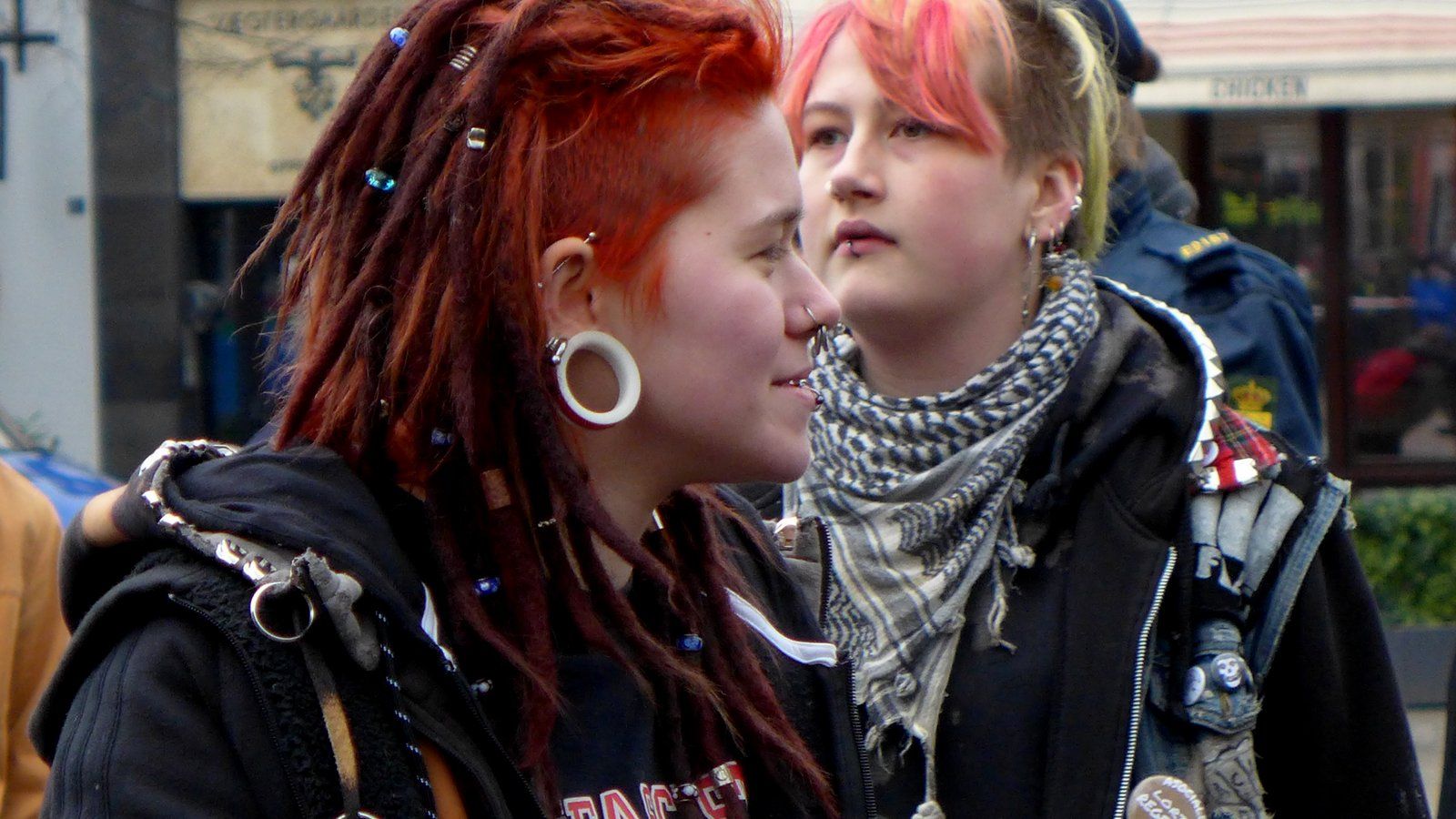 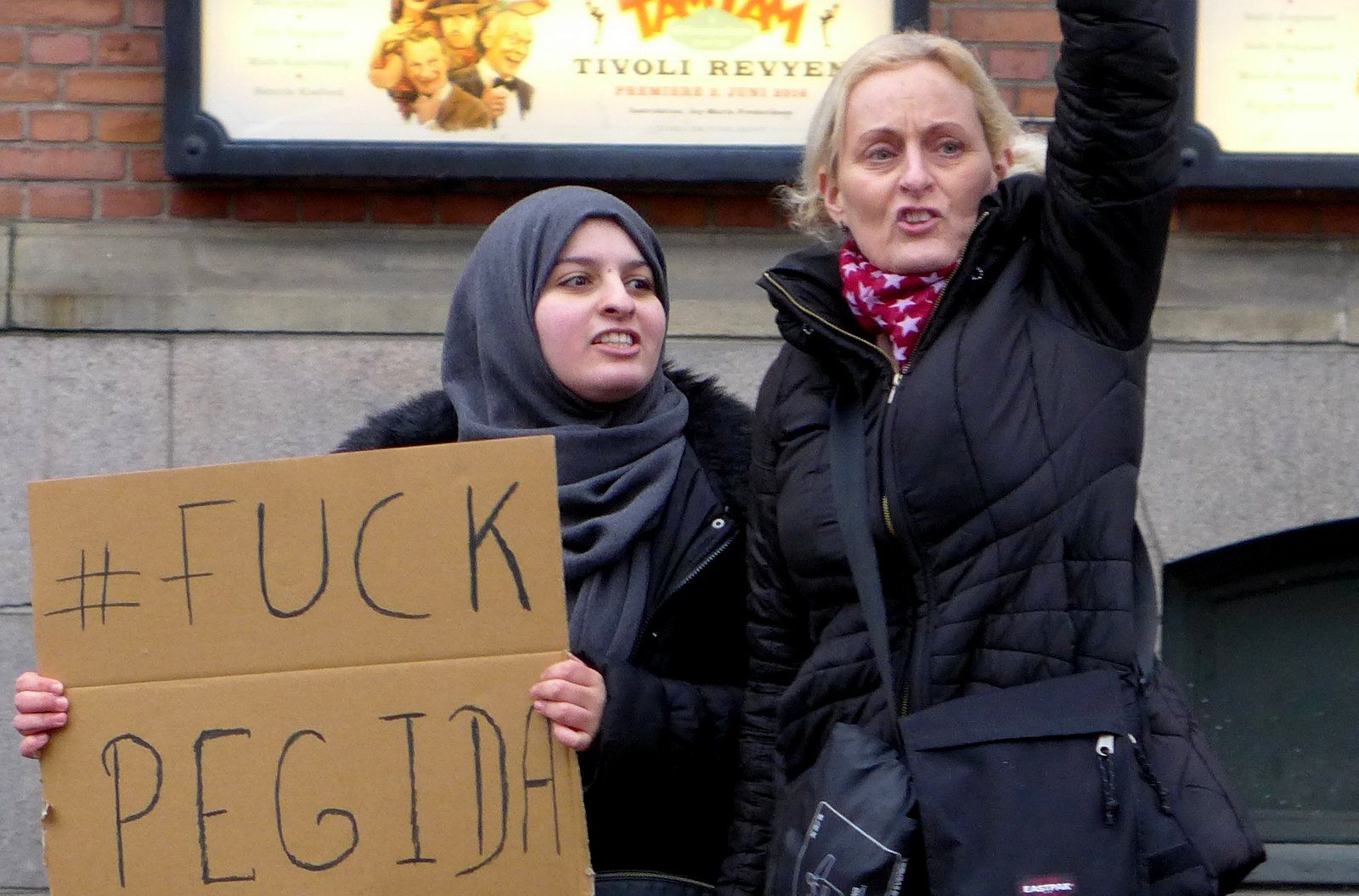 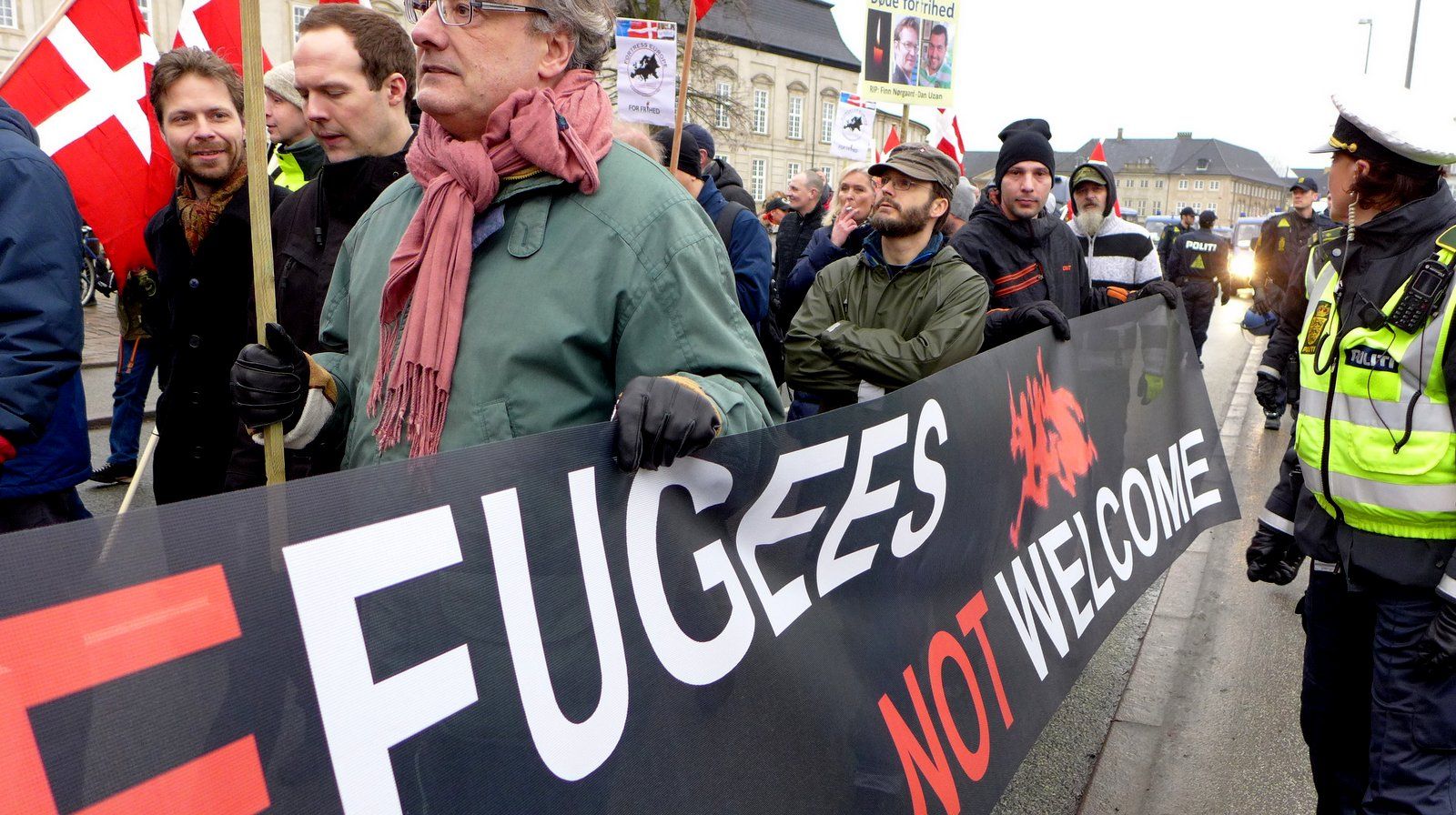 Much more and much better to follow. Thank you Henrik for sending this meanwhile. 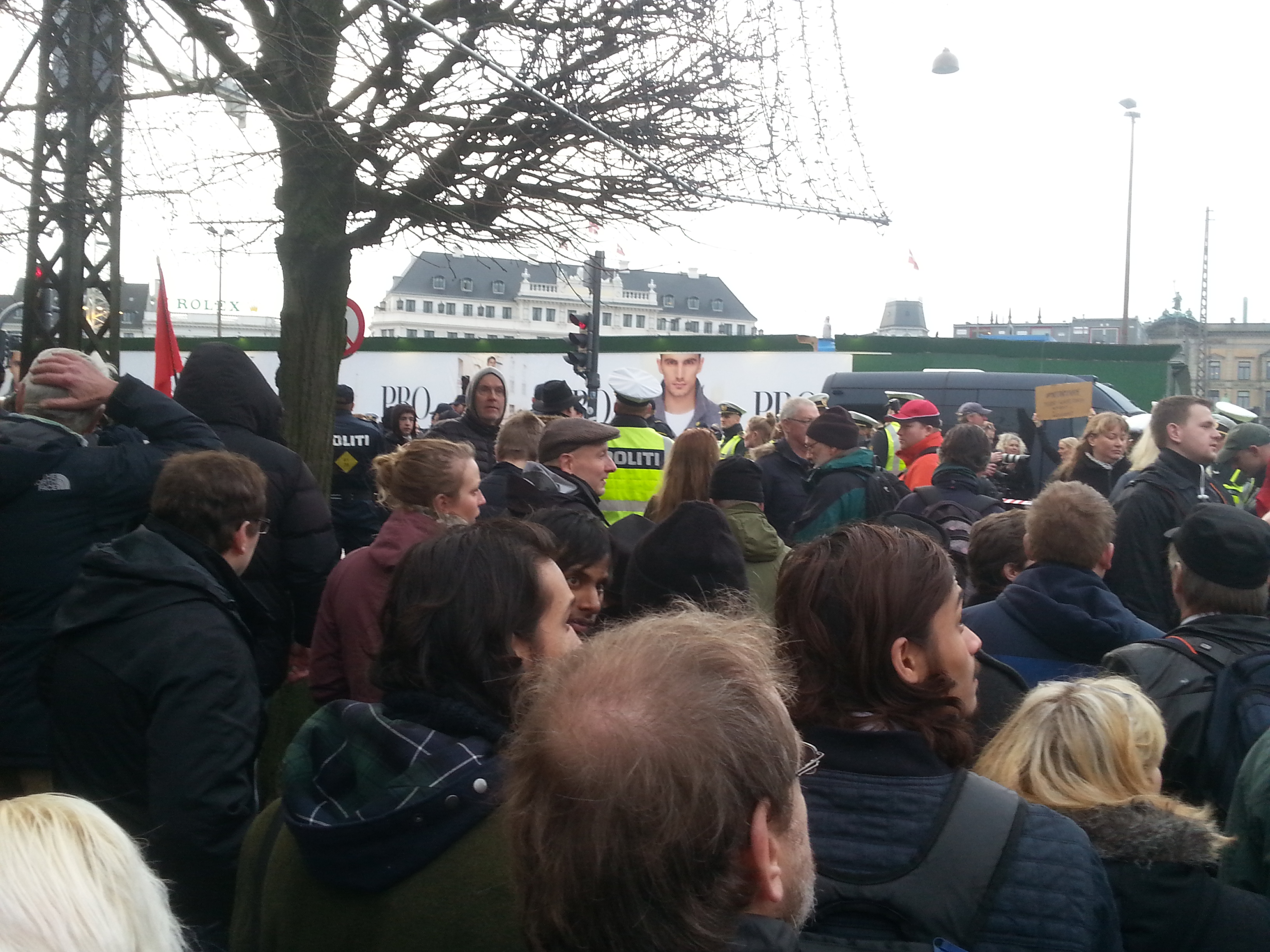 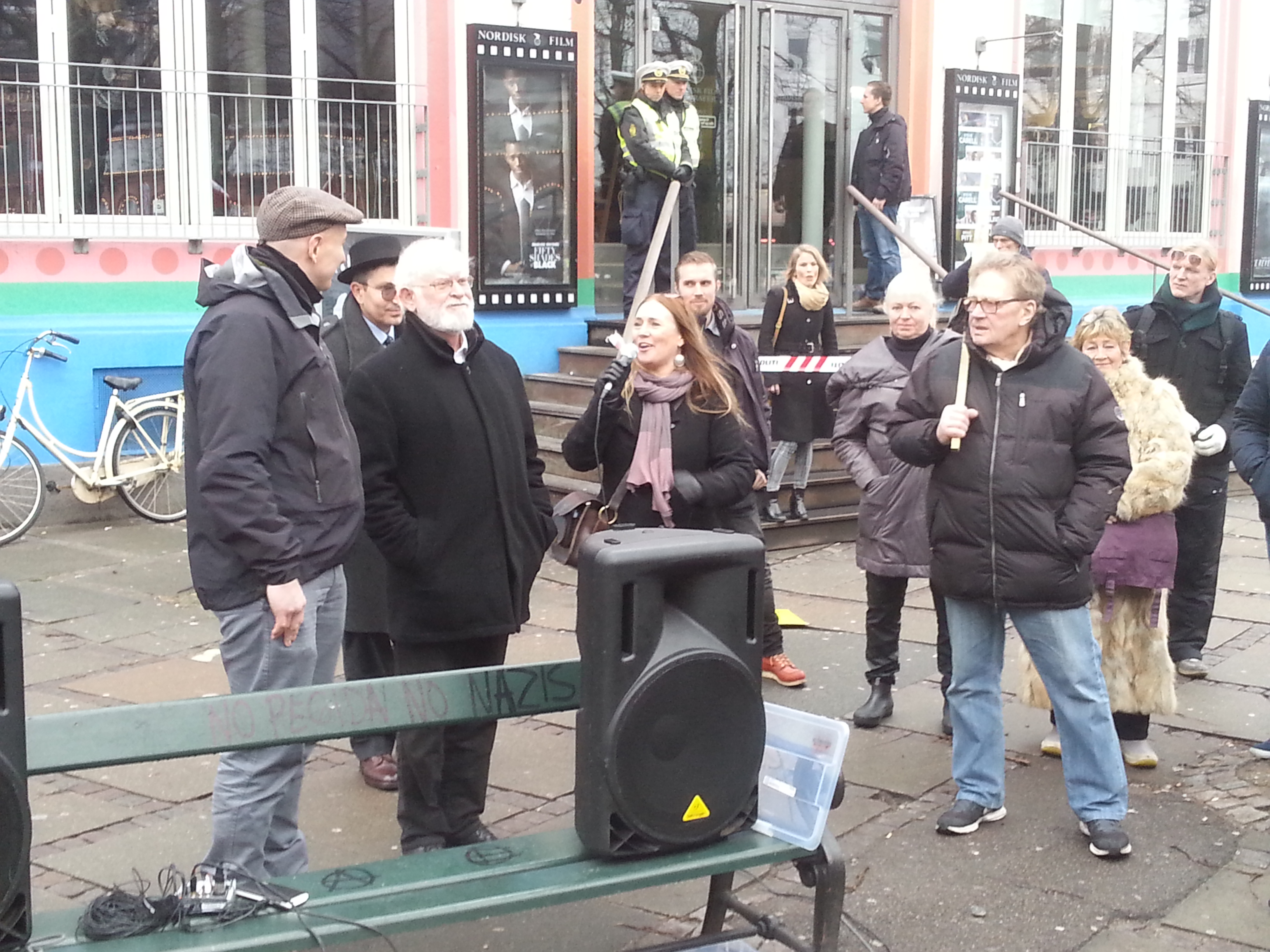 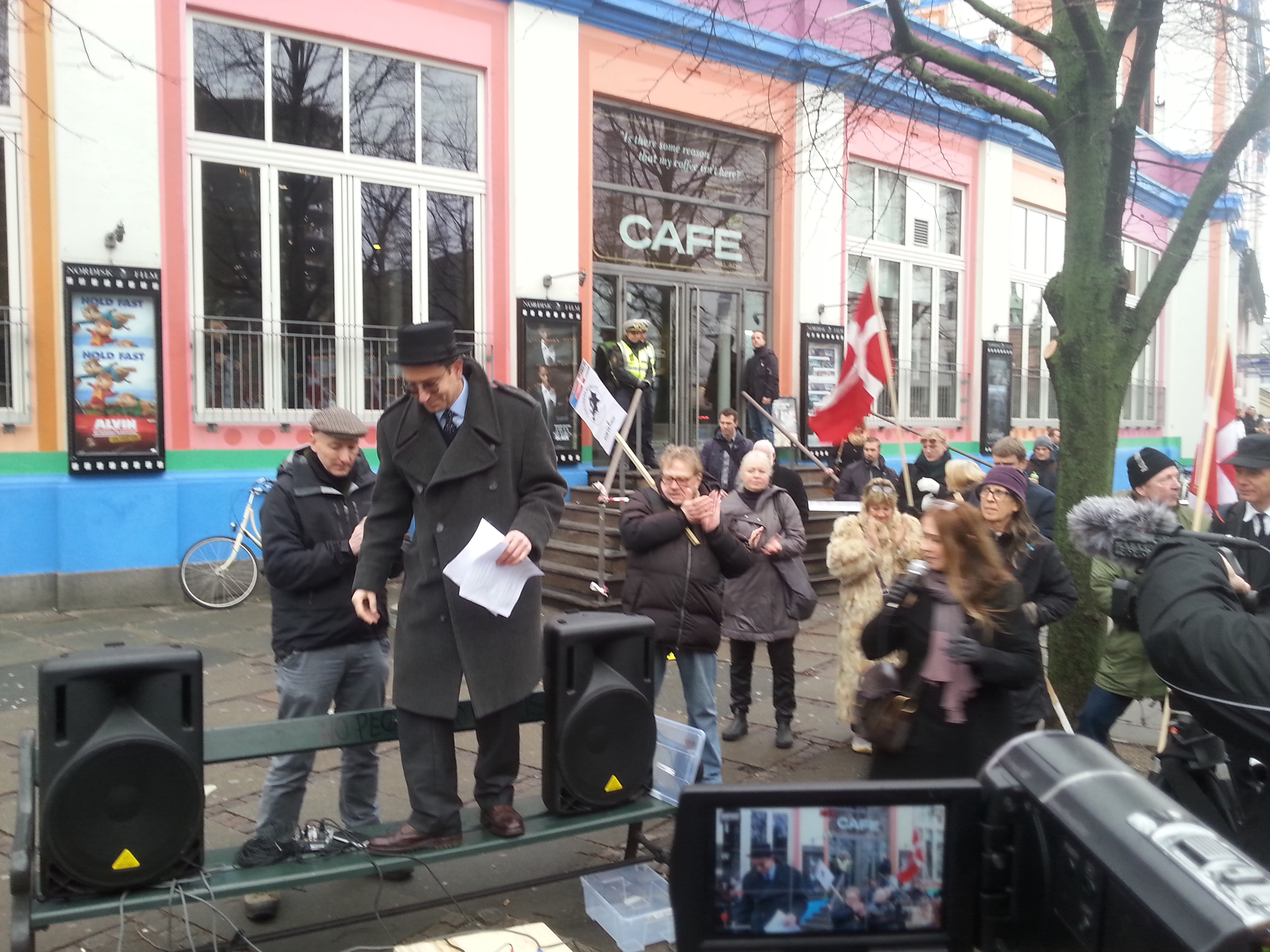 Once upon a time, you did not celebrate the man who did not rape or rob when he was in a position to do so and could maybe get away with it. You expected that behaviour. If you found a wallet, you returned it to the owner without lightening it and didn’t expect a reward

. And once upon a time you didn’t admire a police force for upholding the law and defending the peaceful and law-abiding against the hostile, violent and deniers of the rights of others. But the fact is that in both cases the examples of the law abiding and moral are now so rare that they not only get special attention for doing what is right but actually deserve it. The case of the State of Denmark and the police are a notable example.

Some years ago, it was obvious that the police across the Western world had switched from enforcing the law, to what one might think of as, ‘practical policing’.

A few years ago, I think it was in Sweden but it could have been somewhere else, a small group of Jewish demonstrators and like-minded people had a folk song static demo to support classical liberalism and the state of Israel. They had all the proper permits and they behaved impeccably. A large group of leftists and muslims showed up and started launching missiles and other kinetic forms of opposition and some incendiaries as well. The police response was to close down the permit holders and if I remember correctly, even arrest them on a catch and release basis.

This was clearly the strategy. It seemed at the time that the police forces where simply being practical, abandoning the law and people’s rights under the law to avoid any sort of injury or riot. This was, at least in part, understandable in as much as the goal of preventing injury is desirable.

As time has passed the policy seems a little more insidious than that. The likelihood that it was a police plant that slugged Tommy Robinson when he did that march with cousin Kev Carrol through a muslim area, and the subsequent arrest not of the attacker, but of Tommy for assault who did not even defend himself. Then there was the recent PEGIDA march where it appears that a plant let off firecrackers and suddenly massive police assets moved in and water-cannoned peaceful legal working German middle class folks to break up the demo and cast aspersions on it. These are the same assets that conspicuously did nothing at the many gang rape, rob and grope events across Germany and indeed Europe on New Years Eve. That is, nothing other than order the erasure of the evidence from local CCTV equipment in order to keep it buried.

And so here we are. The Danish police force acted on the side of genuine liberalism. They defended law-abiding people using their central dogma of democracy, the right to freedom of speech and freedom of assembly and they defended the participants from the violent thugs who dare refer to themselves as ‘anti-fascists’. These are the same people who not only physically attack those with whom they do not agree, but they have gone to the home of the organizers of these marches for human rights in Denmark and personally threatened them.

The Danish security services and government genuinely do deserve our praise, admiration and appreciation. They behaved in a non-partizan and professional manner to defend the law and the law-abiding. But it is lamentable that the case is so rare across the scattered remnants of the free world that all who see this remark on it.

Much thanks to Henrik Clausen of The International Sakharov Committee for the footage.

Here is an RT video of today’s PEGIDA demo in Copenhagen, which would of course been totally uneventful and a nice day with, what I am told, was an excellent speech by Tommy Robinson and Paul Weston and Ann Murray Waters was there as well but then ‘ANTIFA had to go attacking everyone and sniffing the vile gasses of their own sanctimonious excreta.

Meanwhile, In France, the people who ANTIFA are ready to overthrow their own culture and history for, started a riot for their ‘right’ to break into the UK and live off taxpayers and impose islam on everyone.

The Port of Calais was closed this evening after a storm of migrants broke into the harbour.

Around 500 migrants stormed the site and around 50 made it on to the Spirit of Britain ferry, where they remained for several hours until they were removed by police, with the port now reopened.

It came after a protest organised by French leftists to support migrants living in squalid conditions in the northern city of Calais drew around 2,000 people, according to organisers.

In this video, Calais invaders riot over conditions they created for themselves.

Here, police escort a number of muslims who thought hijacking a ferry would be the best way into the UK

Here, a cheering crowd of invaders break barriers at Calais

The Telegraph on the “storming of the Ferry”

Migrants managed to break through the Port of Calais’ defences and reached the deck of the P&O Ferry ‘Spirit of Britain’ Photo: Louis Witter

The port of Calais was temporarily closed on Saturday after a ferry was stormed by 50 migrants from the nearby “Jungle” camp, earlier visited by Jeremy Corbyn.

Up to 500 migrants had broken off from a protest march through the town about migrants’ conditions, according to the mayor, Natacha Bouchart.

Around 150 then broke through the port’s perimeter fence, and 50 made it to the gangplanks of the P&O ferry Spirit of Britain. Photographs later showed the migrants standing on the upper decks of the ferry.

(Gee whiz if I didn’t know better, I would say that Jeremy Corbyn, the leader of the UK Labour party, was guilty of the same kind of incitement that they keep jailing Tommy Robinson for except Corbyn was inciting illegals to use more violent action to commit additional crimes to illegally enter the UK while Tommy advocates peaceful demonstrations to restore rule of law and equality for all underneath it) 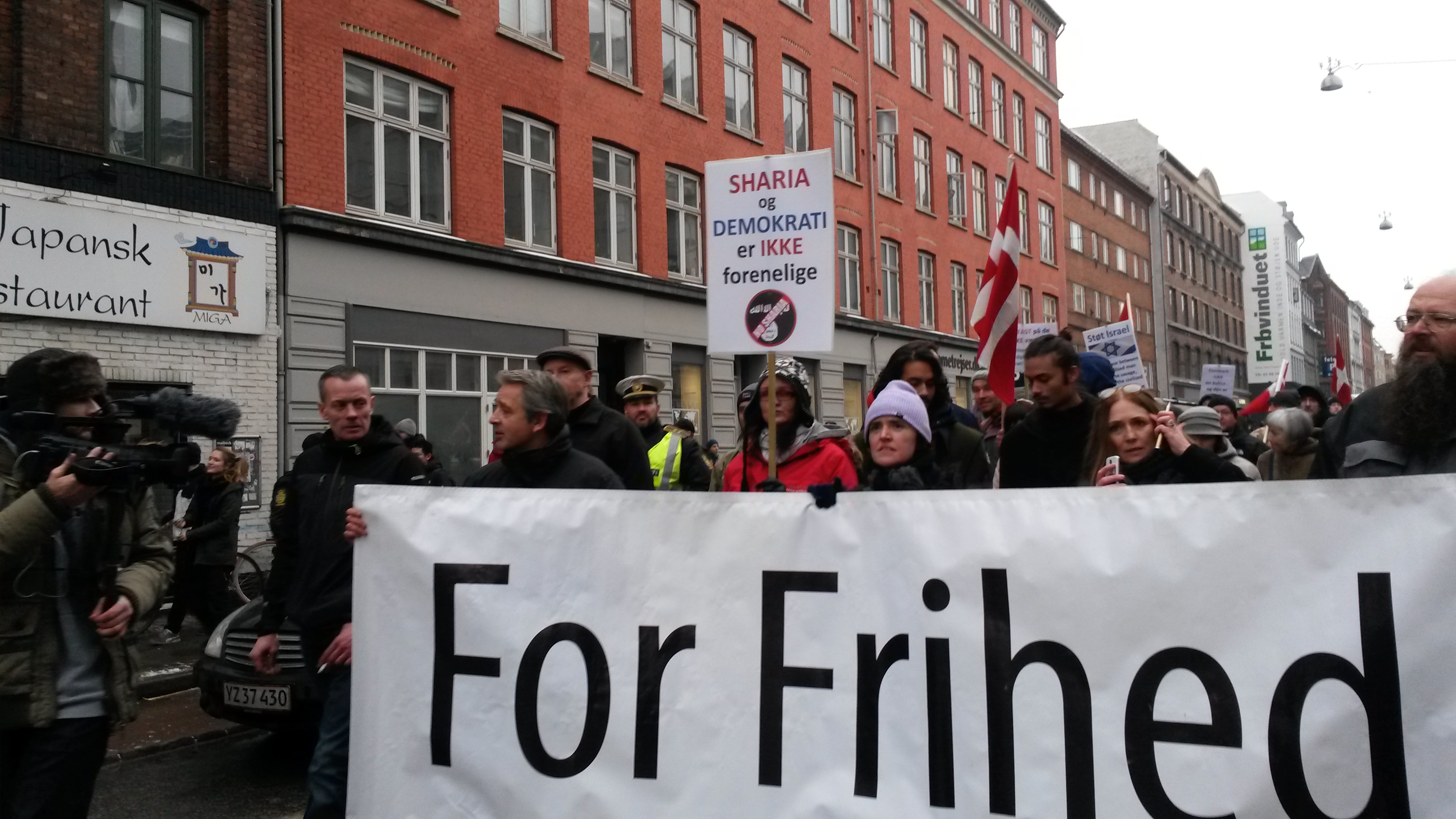