Recently, Project Veritas released materials with hidden recordings of Facebook insiders revealing some of the lengths they go to, in order to manipulate public opinion, and force a narrative on the world. This narrative has nothing to do with facts, or public health. What it does have to do with, is a matter of speculation. But what is fact, is that Facebook has been doing this for years and years. Covertly and overtly.

While discussing the Project Veritas materials with a colleague, a memory of a Danish TV interview with the top man for Facebook in Scandinavia surfaced, where overtly, not on hidden camera, but right there at a news desk, in front of all of Denmark, on TV, he explained that Facebook had a policy whereby Tommy Robinson was banned from the platform, and anyone who posted anything of his would be blocked or banned, and no supportive posts would be tolerated. But, the Facebook executive explained, anything bad someone wanted to say about Tommy Robinson would be allowed. And presumably promoted.

This needs to be added to the recent Project Veritas materials on Facebook for a more complete understanding of the true hideousness that make up the Zuckerberg organization.

This clip was translated and published sometime before September, 2019:

Here are the new Project Veritas materials on Facebook’s deceptiveness and manipulations.

This is very good. English starts within a minute.

And if Youtube takes them all down, I will see to it that there is a version we can watch. And damn the censors.

It is refreshing to see a documentary on Tommy Robinson that is not an ambush.

More vial than the dishonest ambush of Aia Fog on Danish TV, is the removal of the bust of the methods of dishonesty used against her by Youtube, that Tommy Robinson did.

Please make sure that people know this video is here. The direct link it here. An embed of the video is below.

Tommy discusses the events in the video above, with the woman who was ambushed by Danish TV

Thank you Snaphanen.dk for the heads up on the second video

Tommy Robinson exposes Danish MSM as the same bilge water propaganda effluvium that we are all exposed to now from Canada to the UK and beyond.

Not a very nice way to treat a guest on the show I would say.

For those that do not know, Lars Hedigaard is the man who was shot at by a Muslim who did not like his opinion on Islam, and although the police have yet to catch the attempted murderer, Basil Hassan, Lars was in fact convicted in a court of law for actually saying the name of the man who attempted to kill him, Basil Hassan, publicly. It seems that is illegal in Denmark. The killer’s name, Basil Hassan, and image is known to police but they have not managed to find him yet. Lars was punished though.

And now Lars Hedigaard has been banned from Facebook.

There is an upside. Anyone who has tried to leave Facebook knows how difficult it is. It has been some years since I did this, so things may have changed. But the last time I had a FB account and tried to get rid of it, there was a lot of time spent finding the directions, following the steps, and when I did them all, it said that the account would be preserved and all I needed to do to reactivate it was log in to Facebook.

At times it reactivated the account all by itself as I would get notices of people responding to my FB stuff even though the account was supposed to be disabled.

So at least now we know. If you want to get rid of your Facebook account once and for all and have it properly at least disabled if not deleted, then post a number of very positive things about Tommy Robinson. They will take care of the rest.

And once again, Tommy proves to be a valuable tool for freedom and against oppression.

The following video was broadcast on Danish TV sometime shortly before September, 2019 which is when we did the titled version. Special thanks to Tania Groth for that work.

Please watch carefully. The stunning admissions that the Facebook executive makes here is nothing short of a Soviet level manipulation of history, facts and information control.

(If there are issues playing the video, please wait an hour or so and try it again. 3Speak appears to be having growing pains today and videos are not playing as well as normal. Thank you for your understanding)

As many of you may know, Tommy Robinson is being honoured with the Free Speech award by the Danish Free Press Society for 2019.

The award could not be presented at the usual time in 2019, because Tommy was in prison for covering the sentencing of Muslim rape and sex slave gangs as were many other journalists, who were not arrested.

Spokeswoman, Tania Groth, board member of the Danish Free Press Society, explains to Vlad Tepes that all attempts to promote or explain the event are being censored by Facebook with the message: 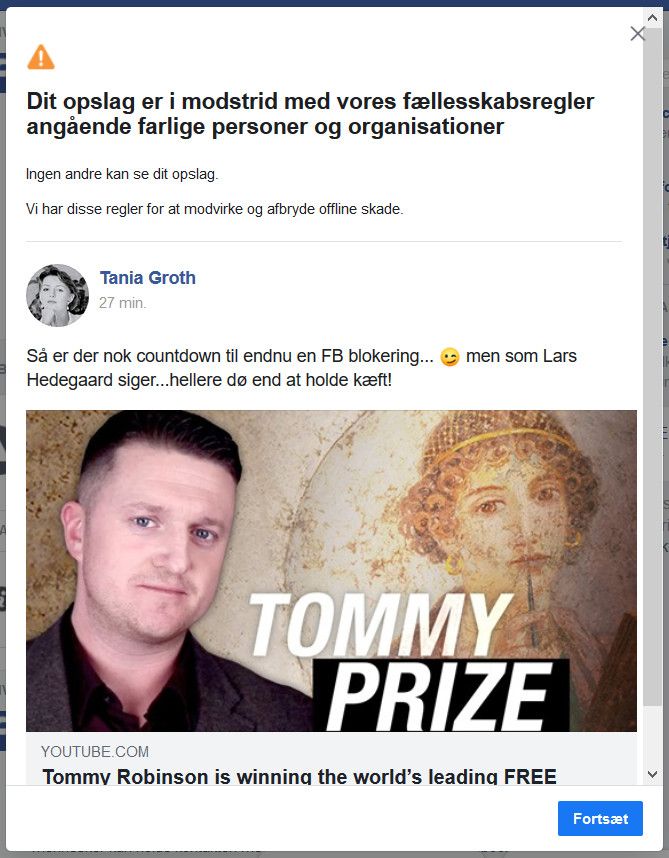 Above the photo of Tommy:

But as Lars Hedigaard says: “Better to die than shut up”.

Below, a cartoon from the Danish Free Press newsletter: 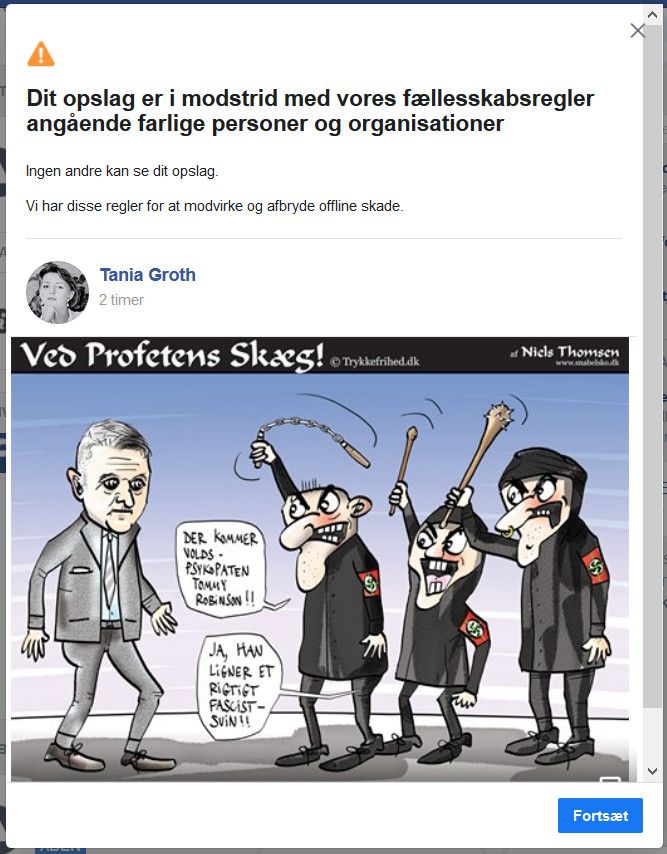 Bubble one: (Spoken by ANTIFA)

Rebel Media is sending Ezra Levant to cover the event

(Notice how much this video is restricted. Unbelievable. There are hundreds of not thousands of actual Nazis and muslim antsemites that preach genocide of the Jews and celebrate Hitler who’s videos are easily watchable. The conditions of this video is an indictment of Youtube, not Tommy Robinson. Whatever else he may be, he is not an antisemite, and is very pro-Israel which has cost him a lot of grief. He has had to dump some of his own best assets because of their anti-semitism.)

Youtube has made this video impossible to play here, or click through to find, or watch it at all unless somehow you have a direct link to it, which you cannot even get from this embed.

So I made it available here.