In true, Canadian-Soviet style, there is no word of radicalization of what exactly. But we do know from an earlier report that these two muslims with a house full of explosives on the cusp of radicalization, are not a national security matter. Said by the same guy who scrubbed all mention of Islam in any form from the National Security brief.

Muslim father and son charged with possessing explosive devices and local police tipped off by US border services, but Public Safety Minister, Ralph Goodale, the same deceptive ‘Grima Wormtongue’, who scrubbed the terror report of any and all references to any form of Islam, says its not a national security issue. 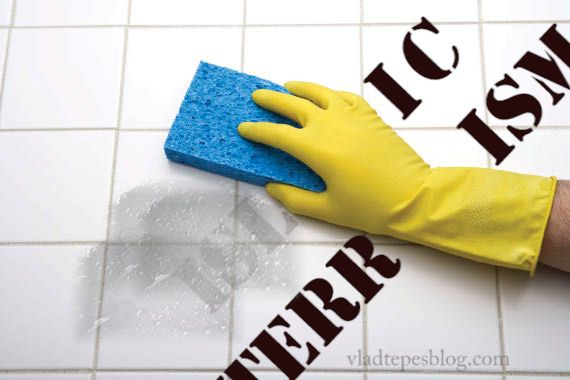 An original translation by Tania Groth with may thanks

From the Swedish publication, Expressen:

A group of children, dressed in camouflage outfits, stand with knives in their hands ready to cut the neck of their victims. The victims are adult men forced to kneel. They are murdered to the sound of the children’s cries:

There are a plethora of these horrible movies on the internet, posted by ISIS propaganda centers.

But, for the first time since the Islamic State was founded in the summer of 2014, a high-ranking emir now reveals details of the IS children’s army.

“They are called Ashbal al-Khilafa. Most are children of Syrians, but there are also foreign members,” says Abu Abboud al-Raqqawi.

In ISIS-controlled areas, all schools have been closed. Parents living there have two options to choose for their sons: Koran studies in the mosque or Ashbal al-Khilafa.

Ordinary Muslims who go to schools do not need to be members of the Islamic State. There they learn about Islam based on ISIS’ interpretation. Or they can choose Ashbal al-Khilafa camp. It is voluntary, says al-Raqqawi.

Those who go to Koran studies do it for a few hours every day. It works just like the Koran schools during the Taliban era in Afghanistan and Pakistan. You do not have to stay in camps to attend the courses.

But Ashbal al-Khilafa is something completely different.

“In Raqqa alone were built at least 15 training camps for Ashbal al-Khilafa. In each city and in every village and community that ISIS controls, such camps are established. Each camp receives between 600-800 children. There they live for six months — completely isolated from the outside world and from their parents. They are being prepared to become future soldiers — not to participate in the fighting now, but as a reserve army,” al-Raqqawi says.

The training consists of practical and theoretical parts. ISIS films circulating on the sect’s propaganda channel Amaq show how a small group of child soldiers are searching through a “bombing house” for their victims. The victims are kidnapped people who have to hide in the house for the children to find and kill. It is part of the children’s education.

“The most dangerous ones are the children who are taught to perform secret assignments.”

Text under photo: According to Abu Abboud al-Raqqawi, ISIS saves its children’s army for future war missions against the West. The pictures are from one of the ISIS propaganda films.

“These children are not used in the war now. A few are selected as suicide bombers, but the rest are saved for the coming war against the West. They are more brutal than the adult members. Several of them volunteer to participate in battles, but they cannot, they say,” al-Raqqawi

The boys’ ages vary between nine and fourteen years. But ISIS makes exceptions for those younger than nine years — if they look older. During the training period the children are divided into different groups. There are those who become suicide candidates or ordinary combatants.

“The most dangerous ones are the children who are taught to perform secret assignments. They learn how the intelligence service works and how to blend into different societies. Those are the ones that will be sent out to the world as dormant cells,” al-Raqqawi says. 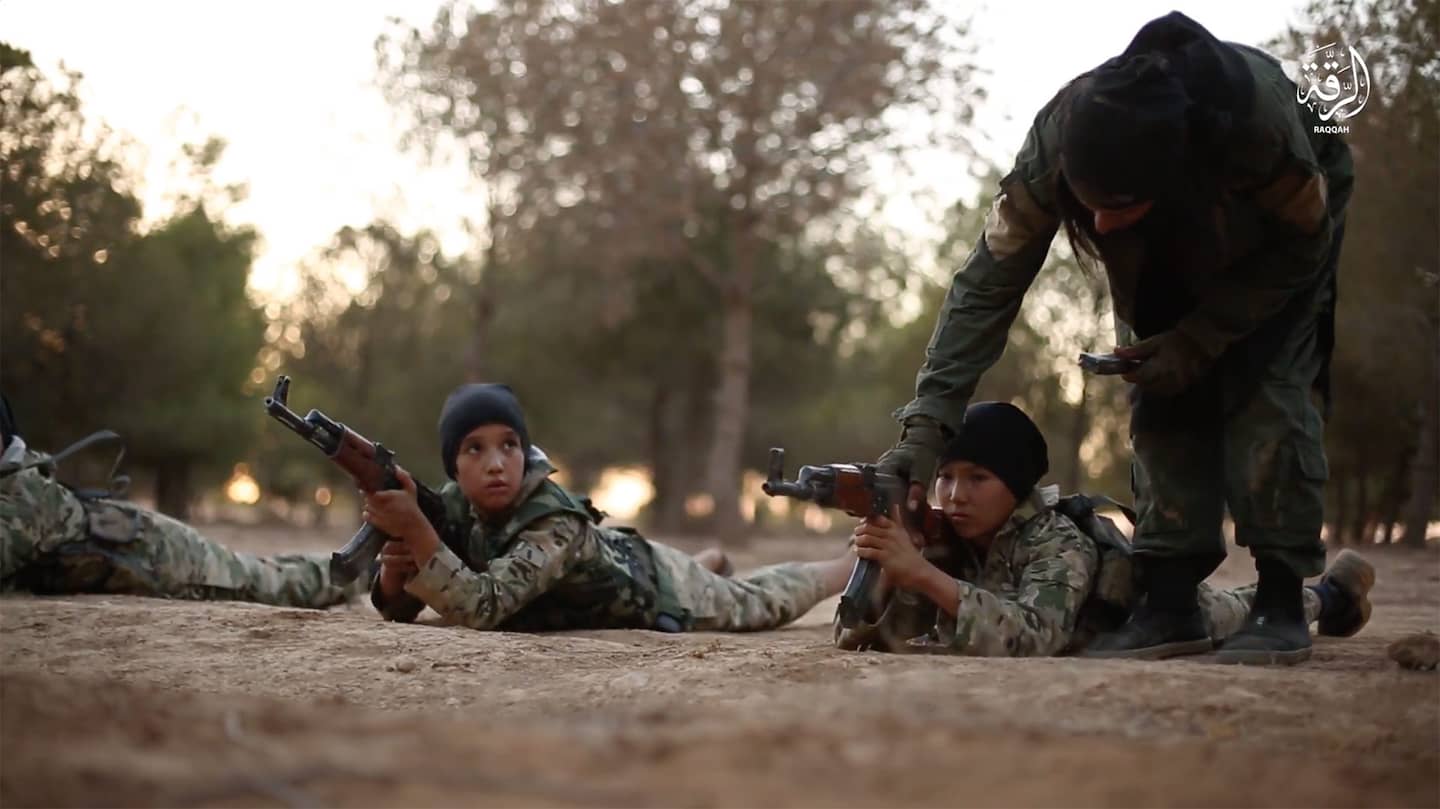 Text under photo: During the six-month training camps, the children are forced to be completely cut off from their families and schooled in terror, murder and propaganda.

According to al-Raqqawi, there were four loyal ISIS cooks who cooked the food that was distributed to all camps in Raqqa. Two of the cooks were foreigners and two were Syrians. Only a few selected were allowed to enter the kitchen where the food was cooked. al-Raqqawi often visited the kitchen to make lists of what was needed.

There he discovered that the cooks mixed a powder from small bags into the food and into the drinking water. Al-Raqqawi had himself participated in various training camps and there heard of the powder that is mixed in the food to make recruits brutal. Now he saw it with his own eyes, even though he does not yet know what the powder contained.

“That’s how they get suicide bombers to volunteer during training camps,” says al-Raqqawi.

“You eat and go to the sharia lecture taught by Abu Mossaab al-Farancy. When Abu Mossaab tells you that your sisters are imprisoned with unbelievers and it is your duty to fight them, you feel motivated to go to war immediately. Or to become a martyr.”

END_OF_DOCUMENT_TOKEN_TO_BE_REPLACED POLICE arrested a 14-year-old boy whose rucksack was packed with explosives amid fears of an imminent terror attack at a major railway station in Europe’s “jihadi hotspot”.

Here is the story on the law suit by the mosque.

An original translation by Egri Nok with much thanks …

A 12-year-old boy may have been sent by the Islamic State when he planned an attack on the Christmas market in Ludwigshafen. The State Attorney and the State Prosecutor have already begun investigations.

A 12-year-old German-Iraqi apparently tried to carry out a nail bomb attack on the Christmas market in Ludwigshafen at the Rhine. Focus reports this in its latest edition, referring to legal and security authorities. According to the investigators, the “highly religiously radicalized” boy might have been “incited or instructed” by an “unknown member” of the terror militia Islamic State (IS). Only because the charger did not ignite was there no detonation.

According to Focus Information, the Federal Attorney in Karlsruhe is investigating on the grounds of a suspicion of a “severe subversive act of violence”. Parallel to that, the State Prosecutor in Frankenthal is leading the investigation of the boy, who was born in 2004 in Ludwigshafen. It is expected that the investigation will soon be closed, because the alleged perpetrator is under the age of criminal responsibility.

According to Focus, the boy placed a backpack with a self-made charger in a bush near the town hall. A few days previously, on November 26, he had, according to Focus, attempted to ignite the bomb at the Christmas market. In the backpack was a can with a hole drilled in it, and a wire leading through the hole. It was filled with explosive material. The outside was sealed with tape and packed with nails.

After an alert passer-by informed the police about the backpack, specialists detonated part of the volatile compound. According to Focus Information, back in the summer of 2016 the boy entertained the idea of going to Syria to join ISIS. After his arrest in Ludwigshafen, the 12-year-old was placed in a juvenile shelter.

H/T M., Wrath of Khan, my new email doesn’t show the from field properly from comments so I will get a few wrong for a while.

Thank you Ritamalik for the hard work on this one.

Someday may you translate something truly beautiful.

This is the stuff of gothic novels.

Thank you Oz-Rita for the heads up on this. Im pretty sure this has to be happening at pretty much every large mosque now.

Weirdly I think this, in a twisted little way, is a sign of an intact culture. Kids in the west aren’t even allowed to play ‘Domestic Terrorists and First Nations’ anymore if I understand the new rules correctly. Perhaps if it is done by white children in a sufficiently self-hating manner it might be allowed but then it would have to be on a stage I think.

Either way, an intact culture or no, it gives a solid idea about the value system in the region.

Thank you Russkiy for the translation.