UPDATE: Two videos showing how well organized most likely ANTIFA communist revolutionaries are hijacking the Brussels demonstration for individual rights, to in fact obliterate those rights. 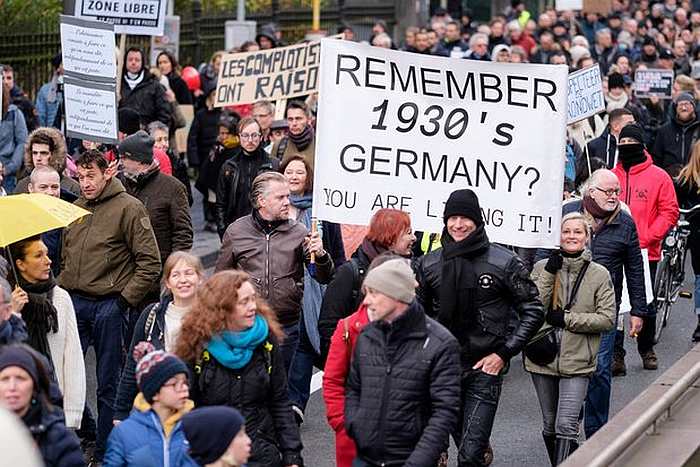 Please read the details and story at RAIR

BLM riots in Belgium. For some reason. Please read the cause and effects over at RAIR Foundation

Please find the details over at RAIR Foundation

Here is a series of videos of the events in Brussels last night:

Here are a few links. I will leave it to to the reader to decide what the intention is. But to the best of my knowledge, previous ‘parades’ in Belgium has shown Jews in ovens, and similar iconography, yet never ever mocked Islam in any way, shape or form.

I spoke to the creators of Belgium’s anti-Semitic carnival float. They’re not sorry.

Thank you @AmyMek for the links.

For those that do Twitter, please follow her. Twitter is trying to suppress her feed in that all to familiar way we hear about on Facebook and Youtube with a variety of names, like Shadow banning, or whatever the new name for Facebook’s control of the spread of ideas that threaten their views is called.

In Belgium, just has been done in Sweden and The Netherlands, and I think other places as well, (More on that later from GoV) a new tactic has been created to make sure that democracy and the people’s one cannot interfere with the Islamic-Marxist plans for civilizational transformation. Its called, translated from French, the “Sanitary Cordon” or “Cordon sanitaire”.

A nice euphemism to try and trick people into thinking that perverting election results to make sure that no one but the far left can be represented in government, is equal to a method of preventing the spread of infectious disease, which they equate with resistance to communism and islam.

The term, “Sanitary Cordon”, is meant to justify the destruction of democracy by preventing actual democracy within a formerly democratic system, without the public really noticing.

It happened again recently in one Belgian municipality:

Vlaams Belang is not a “far right” party except where the left have defined anything not in lockstep with the revolutionary left, is far right. But the term is firmly established with the government-media complex pretty much all across the board.

VB is much like Geert Wilders, Bolsonaro, Orban, Donald Trump etc. Jeffersonian and individualist. In other words, liberal. And they have been doing this a very long time. If there was anything to be frightened of in that party we would all be well aware of it by now.

Meanwhile, the party and its supporters are marching in protest of a party in a Prop-Rep system that got a stunning FORTY PERCENT of the vote, and was frozen out of government with a coalition of leftists.

Remember, Vlaams Belang got 40% of the vote DESPITE the government-media complex persistent lies and misrepresentations of that party for as long as its existed. Imagine what the vote would be had they been properly informed.

Democracy has indeed been subverted. I wonder what would be morally justifiable at this point for the public to do when all its life support has been kicked out from under it. Voting clearly does not work, and neither do protests or any of the mechanisms created to help the people preserve themselves, their institutions, cultures and histories.

I wonder what is next.

Eeyore for Vlad with special thanks to Ava Lon for the translation.

“I would hazard a guess that these demonstrations are against the Global destruction of Western Nations Pact code named, Marrakesh”

Here is the original link:

A machine translation of part of it is here. Hopefully we can get a human one soon:

Fall of the government: N-VA is out, Michel continues to rule

N-VA chairman Bart De Wever today announced around 21:00 that the Marrakesh pact is and will remain a breaking point for his party. Prime Minister Michel, however, said that he is leaving for Marrakech as planned. In a press conference Michel stated at 22: 45h that the government had fallen. N-VA is out and an orange-blue minority coalition will continue to rule. The N-VA excellence will be replaced.

This live article was closed at 00h05.

23h35: Political scientist Bouteca points out that Belgium already had minority governments,  “but it never became a success”

Through BELGA  , political scientist  Nicolas Bouteca (UGent) illustrates that Belgium never worked well with a minority government. The late  Leo Tindemans and the late Gaston Eyskens (both CVP) led minority governments in 1974 and 1958, but they quickly lost out .  “In the Scandinavian countries, [and minority cabinets] are more common, but in Belgium it is not in the tradition.”

No idea where this is, but the video has today’s date on it. No idea what the motive is either. The poster frame you see above has nothing to do with the actual video, so we know the creator is not honest.

I think we can say though, that this is a data point to what I suspect is behind the Yellow Vest protests, now going Western Europe wide.

It is to unite all people to achieve the leftist goal of bringing down national governments.

Protesters think they are protesting Merkel and Macron. But in reality they are helping to achieve their end game. Global or supra national, non-democratic government with the predictable authoritarian and anti-freedom rules enforced. And probably no rule of law as we understand it.

The first video is in France (Burgundy).

I looked up the advertisement on the pole at 1:28 – Association de la Jeunesse Auxerroise (French pronunciation:; commonly known as AJ Auxerre or simply Auxerre) is a French football club based in the commune of Auxerre in Burgundy.

Now this, I bet, is just jealousy and resentment. Anyone ever see the movie, The Last Supper? A great ride down a moral slippery slope starting with lofty ideals and ending with killing girls that remind the characters of other girls that wouldn’t sleep with them in high school.

For those of you who listened to my !first ever podcast with Amy Mek (At or after around 17 minutes in) on Tuesday, I may have expressed my own fears about what this really means. it is something about which to be suspicious when ANTIFA black block and everyone else appear to be on the same side, with the intention, presumably, of bringing down these governments.

This can only mean what will happen, Vs. what the non-communists want to happen after an event like that, will not be at all similar.

Nonetheless, these events must be watched:

More videos will be added to this post over the day.