Could be from the ministry of tourism. But I don’t think they are. Thank you C.

More of the clashes taking place today in #Beirut after #Hezbollah & #Amal called for a protest against judge #TarekBitar #Lebanon #?????_????? pic.twitter.com/xdgSVmfCXH

The medicine, gasoline, diesel, gas, bread, electricity and water are cut off, but the weapon is not cut off! Young people are always ready! https://t.co/KDK5XBunCF

Did these snipers learn protest control from the Australian police? Or the other way around.

Hezbollah-Amal protest in Beirut turns violent as a sniper opens fire at the demonstrators. Reportedly, there are dead and wounded. pic.twitter.com/wZgeBkb3XT

Can’t really support multiculturalism unless you think this is OK

This is at the moment it was sent, a live feed:

Earlier reports indicated the 2700 tons of ammonium nitrate were seized in 2013 aboard Moldovan ship heading to Africa. Stored in Beirut Port after seizure. Sparks from welding ignited fireworks, which then ignited the ammonium.
https://twitter.com/DavidADaoud/status/1290746369737728002
……
Official statement, saying there were 2750 tons of ammonium nitrate at Beirut Port

Al-Jadeed attributing statement to Lebanese PM
@Hassan_B_Diab
saying he won’t rest until person responsible for presence of “shipment of 2750 tons of ammonium nitrate for six yrs” in Beirut port “without precautionary procedures.”

People are getting sick breathing fumes.
……
Timour Azhari @timourazhari ·2h
#Breaking: Lebanon General Security chief says that 2700 tons of ammonium nitrate were in Beirut’s port on the way to Africa. They exploded. #BeirutBlast
……
Travel – State Dept @TravelGov
#Beirut #Lebanon: We are closely following reports of an explosion at or near the Port of Beirut on Aug 4. There are reports of toxic gases released in the explosion so all in the area should stay indoors and wear masks if available.

Monitor local news, follow the emergency instructions provided by local authorities, enroll in the Smart Traveler Enrollment Program to receive important information, and follow us on social media. We urge U.S. citizens in the affected areas who are safe to contact loved ones
directly and/or update their status on social media. If in the affected area and you need emergency services,contact local authorities; police can be contacted at 112, civil defense at 125, and the Lebanese Red Cross at 140.

Unfathomable level of destruction in #Beirut. The city has overcome war, invasions, earthquakes and today’s explosion is within than magnitude.

A couple of things that should be known to give context to this video.

The chopped Santa hat seen in this video can only be worn by a person who is a graduate of the most prestigious institute of Islamic learning in the world by literally an order of magnitude. To paraphrase Stephen Coughlin on this, where Al_Azhar is #1, there is no number 2 and so on down to about 12 where the next one is. Al-Azhar is essentially Oxford, Yale, Harvard and the Vatican rolled into one.

So when you see a Santa-parae like this one protesting in front of the Russian embassy, presumably about the bombing of the Islamic State, it becomes rather more difficult to claim that the Islamic State is not truly Islamic. Now I do not speak Arabic so its possible that in fact they are protesting the treatment of lab animals or GMO foods in Russia, but I would wager that when Rita Malek gets back to me on this, they are protesting Russian expeditions against IS targets.

It is also possible that judging by the signage they are spinning it as Russia supporting Assad and that is killing muslims or whatnot. But that is onion paper at best as many islamic groups have already sent out instructions for muslims to start attacking targets in Russia as a response to bombing IS targets.

Personally, I am a huge fan of Vice TV. Their expose of North Korea and of Liberia are stunning and brutally honest in a time where that is more rare than diamonds thanks to political-correctness. M sent me a link to all 5 parts of this documentary.

SIDON, Lebanon (AFP) – Sixteen soldiers have been killed in clashes with supporters of a radical Sunni cleric in southern Lebanon, the army said Monday, in violence tied to rising sectarian tensions fanned by the Syria conflict.

The fighting began on Sunday on the outskirts of the city of Sidon and intensified on Monday, residents and local media said.

The security cabinet, including Lebanon’s army chief, pledged the military would fight until it “finishes with” Salafist Sheikh Ahmad al-Assir.

A military judge issued a warrant for the controversial cleric’s arrest, a judicial source said.

The violence is among the worst in Lebanon since the start of the Syrian conflict, which has inflamed sectarian tensions in the country, particularly between Shiite supporters of the Damascus regime and Sunni backers of the uprising.

“Sheikh Assir will stay in the mosque until the last drop of blood.”

ARSAL, Lebanon (Reuters) – A Syrian jet flew 20 km (12 miles) into Lebanon and fired a missile into a field on the outskirts of the border town of Arsal on Wednesday but caused no casualties, witnesses said.

Lebanon has maintained a policy of “dissociation” from Syria’s two-year-old conflict. But many Lebanese officials feel their country is increasingly at risk of being dragged into the civil war, which the United Nations says has killed 70,000 people.

Syrian forces loyal to President Bashar al-Assad have fired mortars into and occasionally entered Lebanese territory in pursuit of rebels. They threatened to carry out air strikes in Lebanon last month.

This story is worth seeing for it’s raw stupidity. Imagine finding a grocery item that was perfectly fine to eat but its national origin offended you, so the actual ARMY comes in to inspect it. I shudder to think of what kind of camouflage the Lebanese army must wear in order to hide in a grocery store. High heels and a hijab I suppose.

A photo of the Israeli produce in Spinneys taken via a cell phone in south Lebanon on Tuesday, Jan. 1, 2013. (The Daily Star/Mohammed Zaatari)

SIDON, Lebanon: A Lebanese shopper discovered several food items made in Israel in one of Lebanon’s largest retailers Tuesday.

While shopping at Spinneys in the coastal city of Sidon, a man, who preferred to remain anonymous, discovered a bag of three kinds of peppers made in Israel.

He immediately contacted local authorities who in turn contacted the Lebanese Army.

Members of military intelligence and police arrived to Spinneys to discover 13 similar bags that have the word “Israel” printed on the sale tag.

The death of a senior Lebanese intelligence official in the Oct. 19bombing in central Beirut appears now to have been a targeted assassination. The official, Lebanese Internal Security Forces chief Brig. Gen. Wissam al-Hassan, was directly involved in providing logistical and supply-line support in Lebanon for the rebel Free Syrian Army, which is attempting to overthrow the regime of Syrian President Bashar al Assad. The assassination was likely intended to disrupt the Syrian rebels’ support networks — as well as to trigger a series of retaliatory strikes against Syrian assets and allies and to spark a broader increase in sectarian conflict in Lebanon. 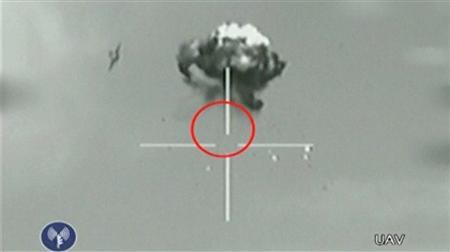 A still image taken from Israeli Defence Forces (IDF) video footage shows what they say is a small unidentified aircraft shot down in a mid-air interception after it crossed into southern Israel October 6, 2012. Hezbollah leader Sayyed Hassan Nasrallah acknowledged on October 11, 2012, sending a drone aircraft which was shot down last weekend after flying some 25 miles (55 km) into Israel. Image taken October 6, 2012.

(Reuters) – Lebanese Hezbollah leader Sayyed Hassan Nasrallah acknowledged on Thursday sending a drone aircraft that was shot down last weekend after flying some 25 miles into Israel.

Nasrallah said in a televised speech that the drone’s parts were manufactured in Iran and it was assembled by members of the Shi’ite Muslim militant movement in Lebanon. He confirmed a statement by Israel’s prime minister earlier in the day saying that Hezbollah was behind the drone flight.

More photos and so on here at RT

According to Stratfor, both Saudi Arabia and Qatar are urging their nationals to leave Lebanon due to threats of kidnappings of Suni Muslims presumably by Syrian regime loyalists. I’m not 100% clear on the rationale yet but it is interesting that both nations have issued this warning to all their citizens within hours of each other.