Al-Manar, a Hezbollah-affiliated TV channel, has released footage of a missile strike on an Israeli military vehicle near IDF’s Avivim military base on the Israel-Lebanon border. The video shows two Kornet anti-tank missiles fired from different positions and narrowly miss the vehicle which then led to massive artillery fire in retaliation. IDF reported no casualties in the incident. Tension has run high on the border since a drone attack on a Hezbollah stronghold in Beirut last week which could be conducted by IDF.

It seems that Hizb’allah now recruits kids young enough to train before they can think clearly enough to know its a bad idea to join up.

TEL AVIV, Israel, Dec. 19 (UPI) — Israeli generals are preparing for a decisive — and probably brief — war against Hezbollah, one of Israel’s most implacable foes, with plans to smash the Iranian-backed Lebanese movement’s military power, a study says.

The Israelis’ primary objective will be to eradicate Hezbollah’s reputedly massive arsenal of missiles and rockets “for years to come,” the report by the Begin-Sadat Center for Strategic Studies in Tel Aviv said.

There are certain specific methods that Iran’s proxy army and terrorist group, Hizb’allah (‘party of god’) have been using for some time to raise cash for their operations world wide.

I hope to be able to post an interview with a well known expert on this exact subject within a couple of days. Meanwhile, have a look at the following links all from within the last 36 hours or so from Quebec, keeping in mind that Hizbollah is an Iranian terrorist organization that funds its activities with credit card fraud, drugs, counterfeiting and not just cash (which they do a lot of) but even of prescription medications which they distribute world wide including a very popular (older) one used to treat ‘hyper-kinetic children’ among other things.

First, the arrest yesterday of an Iranian ex-pat who already spent 10 years in a Canadian jail for drug offenses, and then was arrested yesterday for attempting to board an aircraft with all the components of an explosive device including bullets and some as-yet unnamed powder.

Now, this string of busts today in Quebec:

And here from the Gazette:

Police said they picked up a man who investigators believe is the mastermind, Zobair Javad, 33, of Boucherville.

Here is a google translate of the official Govt. of Quebec page on this raid.

Counterterrorism officials on Wednesday revealed stunning details about 44-year-old Wissam Allouche, an alleged former Hezbollah commander who was arrested in Texas after being indicted on charges of not disclosing his affiliation with terrorist groups.

During Allouche’s bail hearing in San Antonio Wednesday, the prosecution said the FBI recovered documents they claim he fabricated to falsely show he had security clearances. It was also alleged that Allouche tried to “hook up” with women at Fort Sam Houston to possibly to gain access to sensitive material, MySanAntonio.com reports.

And that’s not all.

As previously reported by TheBlaze, Allouche was arrested last week for failing to disclose his membership in the Amal militia and Hezbollah in Lebanon in the 1980s and lying about issues concerning his marriage to a U.S. citizen. He is also charged with failing to disclose his ties to the terror groups when he applied for a Defense Department position that required security clearance. 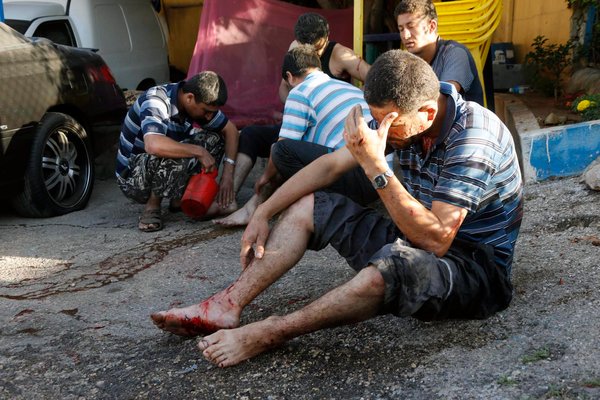 An image grab from Hezbollah’s al-Manar TV shows Hassan Nasrallah, the head of Lebanon’s militant Shiite Muslim movement Hezbollah, giving a televised address from an undisclosed location on May 9, 2013 in Lebanon. Syria is to supply Lebanon’s Hezbollah with “game-changing weapons” despite Israel’s air strikes reportedly aimed at cutting off the flow of arms, Nasrallah said. Israel has not officially commented on the alleged strike.

A diplomatic source in Lebanon told the AFP news agency that the operation destroyed surface-to-air missiles recently delivered by Russia that were being stored at Damascus airport.

The Israeli source confirmed that the strike targeted “game-changing” weaponry, but not chemical weapons.

US President says Israel is justified in preventing Hizbullah from obtaining advanced weaponry.

Obama joined Israeli officials in declining to comment on the reported strike, saying he would let Israel “confirm or deny whatever strikes they have taken.”

“What I have said in the past and I continue to believe is that the Israelis justifiably have to guard against the transfer of advanced weaponry to terrorist organizations like Hizbullah,” the president told Spanish-language Telemundo television during a trip to Mexico and Central America. The Bulgaria bombing would be the first successful Hezbollah attack in the West since the 1980s, police say

A bus bombing that killed five Israelis and a driver in Bulgaria was most likely the work of Lebanon’s Hezbollah militants, Bulgarian officials say.

The attack, in the Black Sea resort of Burgas in July 2012, was carried out by a bomber who died at the scene.

A six-month probe uncovered “obvious links” to Lebanon and Hezbollah, prompting criticism from Israel’s prime minister and a top US official.

Israel has always blamed Hezbollah – and Iran – for the bombing. Labboun Rafic Mohammed, the Muslim cleric allegedly linked to Hezbollah and a fugitive from U.S. justice who was arrested in Merida on September 8, 2012, arrived in Yucatan services through a network of Lebanese government officials in collusion with Belizeans, who gave him a fake passport from that country.

As we reported at the time, upon his arrest by officers of the Public Security Secretariat Yucatecan government, Labboun exhibited a Belizean passport in the name of Wilhelm Dyck, a Mennonite child born in that country in February 1976 who died two months later. A driver’s license was issued in the same name.

Yesterday we reported that Razur Antonio Elias, the director of the Mexican Drug Observatory investigating Islamist organizations associated with Mexican drug traffickers and their possible ramifications in the Yucatan Peninsula, said that this group of people offered Belizean passports for $ 25,000, with a birth certificate and fake driver’s license. In addition to these documents, the group organizes the transfer of these people with forged documents through Mexican territory to the U.S. border, where the city of Merida, it seems, is key to the logistics.

The detention of a Lebanese with a Belizean passport has set off alarm bells. Although Labboun Rafic Mohammed, arrested in September in Mérida, is a radical Islamist hardliner and a er of Ayatollah Khomeini, the U.S. authorities had failed to demonstrate his links with Hezbollah terrorist activity, until recently. Tracks New data from this case, however, point to the possible presence of the Islamic group backed by Iran and Syria in some areas of the Yucatan Peninsula.