An original translation from Kronen Zeitung:

After three on-duty Viennese police officers were wounded, in part seriously, by thugs on Christmas Eve, the next attack on an officer followed on Christmas Day: Downtown, four men, who were involved in a fist fight, broke the woman’s hand.

According to police spokesman Patrick Maierhofer, the officers were alerted around 7 PM. The reason was a fist fight between four men at Fleischmarkt.
The officers wanted to calm down the situation, but the thugs immediately turned against the police and attacked them verbally and physically. The officer was taken to hospital with a fracture. Her colleagues arrested the perpetrators. They are four Russian citizens from Chechnya at the ages of 19, 20, 22 and 30 years.

3, I have received educated opinions that the video posted here earlier of the Al Qaeda people firing what appear to be chem-weapons are likely exactly that. That further, the various Muslim Brotherhood factions such as Hamas etc. are capable of multiple methods of delivery of chemical weapons using former soviet delivery systems, even katuyshes etc.  I will publish more later if this was not confidential info.

4. Georgia: Stand off between locals and authorities over the dismantling of a minaret given to a mosque by Turkey which the government dismantled. Series of links below and video. (Thank you M)

4c. Photos of the op

by The Associated Press

Associated PressRussian President Dmitry Medvedev, left, welcomes Venezuela’s president Hugo Chavez at the Barvikha presidential residence, outside Moscow on Thursday, Sept. 10, 2009. Venezuela’s president Hugo Chavez says his country has recognized the independence of the Georgian separatist regions of South Ossetia and Abkhazia. His announcement Thursday at the start of a meeting with Russian President Dmitry Medvedev could be a significant boost for Moscow, which recognized the regions as independent after last year’s war with Georgia.
Enlarge Associated Press

Venezuelan President Hugo Chavez on Thursday said his country has recognized the independence of Georgian separatist regions South Ossetia and Abkhazia in a boost to Russia, which had been almost alone in recognizing them.

Russia recognized the two regions as independent shortly after driving Georgian forces out of them in last year’s war. But only Nicaragua had followed suit, a tacit slap by the international community and an embarrassment to Moscow’s contentions that it was bringing stability to the regions rather than occupying them. END_OF_DOCUMENT_TOKEN_TO_BE_REPLACED

Interestingly, Russian cyberwar artists seem to have managed to keep Twitter off line for several consecutive days now. Why one may wonder, would Russia spend any resources to make sure Twitter cannot function.

As Stratfor reported, there is a Georgian blogger who is well read and respected who routinely posts to Twitter as well as his own blog. Clearly, Moscow noticed the extent to which Twitter played a part in fomenting a peoples rebelion in the streets of Iran.

Below, the Stratfor report:

Georgia: Single Blogger Targeted Through Attacks on Social-Media Sites
August 7, 2009
With a single Georgian blogger as the target, Twitter, Facebook, LiveJournal and Google’s Blogger were attacked with Twitter facing a site-wide outage, CNET News reported Aug. 6, citing Max Kelly, chief security officer at Facebook. “It was a simultaneous attack across a number of properties targeting him to keep his voice from being heard,” Kelly said of the blogger with the account name “Cyxymu,” which is the name of a Georgian town.

This SITREP from Stratfor, explains why Twitter was down all day yesterday, and shows other targets of the DDOS attack.

Georgia: Single Blogger Targeted Through Attacks on Social-Media Sites
August 7, 2009
With a single Georgian blogger as the target, Twitter, Facebook, LiveJournal and Google’s Blogger were attacked with Twitter facing a site-wide outage, CNET News reported Aug. 6, citing Max Kelly, chief security officer at Facebook. “It was a simultaneous attack across a number of properties targeting him to keep his voice from being heard,” Kelly said of the blogger with the account name “Cyxymu,” which is the name of a Georgian town.

Russia, Georgia: Georgian Blogger Blames Moscow For Attack
August 7, 2009
The Georgian blogger known as Cyxymu blamed the Kremlin for the attack on Aug. 7, The Guardian reported. Cyxymu was the target of a cyberattack on Aug. 6 that affected hundreds of millions of Web users. “Maybe it was carried out by ordinary hackers but I’m certain the order came from the Russian government,” Cyxmu said. Cyxmu is the Latinized name for Abkhazia, one of Georgia’s breakaway republics. Cyxmu, who gave his real name as Georgy, is an active critic of Moscow’s politics in the Caucasus and was the victim of a similar attack last year that crashed LiveJournal. 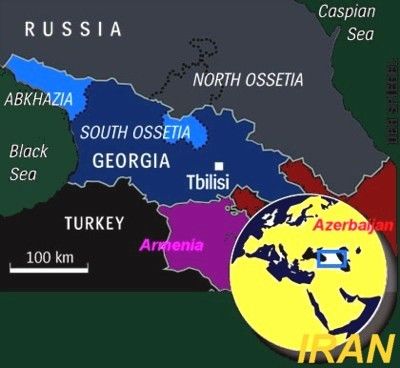 Thank you to our friend in Russia’s near far.

Reuters writes (http://www.reuters.com/article/technologyNews/idUSTRE4AK64D20081121) that Russobit-M, a Russian software company, is pulling an America’s Army with the War on Georgia propaganda.

Next month, a computer game titled Confrontation — Peace Enforcement simulating a war between Russia and Georgia is to be released. In best Cold War tradition, there’s even an “unknown Western power” allying with Georgia; an obvious reference to the Russian propaganda myth of USA sending troops to fight in Georgia. However, the only visible Western presence is Poland, who supposedly represents all of NATO.

An avid follower of Orwell will have field day with the game. From the title — itself borrowed from a Medvedev’s speech — to the game team’s assurance that the game is not related to politics, it’s an obvious attempt at pushing Russian version of the events of the real war, and tying acceptance of this version to patriotism.