Video seems not to work as embed.

This is a huge improvement actually.

an original translation by Michael Laudahn

A translation from Hermes:

In an interview published on Monday, Ayaan Hirsi Ali talked to Die Welt about the current upheavals in the Muslim world in reaction to the West’s “blasphemy” against Islam and its prophet.

Many thanks to Hermes for the translation:

“The West should finally defend its values”

She is threatened for having criticising Islam: the Somali-born Dutch publicist Ayaan Hirsi Ali speaks about the revolts in the Muslim world and the reactions to them.

Die Welt: A new episode of worldwide violence and protests against the insults to the prophet Mohammed has begun — now sparked by an insignificant YouTube video. In the past there has been a Fatwa against the author Salman Rushdie, violent protests against the Danish Mohammed cartoons, and also against you — your film about women in Islam. And your collaborator in the making of this film, Theo Van Gogh, was assassinated by militant Muslims, after which you had to disappear. Is there something different in these protests compared to the previous ones?

Ayaan Hirsi Ali: I would say that these revolts come from a single mold, because all have a common origin: a political ideology embedded in a 1400-year-old religion and culture which leaves no place for criticism towards its founding father and its sacred texts. As soon as it comes to the Koran and the Prophet, the Muslims feel insulted by any work they consider to be disrespectful regarding these two symbols: from the actual Koran-Project in Germany, which represents a serious scientific work, to the infamous video from YouTube. For the average Muslim, these are both equally attacks against their faith.

Die Welt: A difference from past protests is that these are taking place following the Arab spring. In the meantime, people can now express their opinions and have elected leaderships like the Muslim Brotherhood in Egypt. Islamists are now in the mainstream and they are as angry as those people the West has otherwise branded as the militant sector. How do you evaluate this?

The video below from Powerline with article here:

Ayaan speaks at 19:00 for those who wish to skip the introduction

Ms Hirsi Ali, no stranger to controversy, told an audience of several thousand at the Global Atheist Convention in Melbourne, that it was Christians and conservatives who led the way in defending free speech and rights. ”Why is it that secular liberals in the West fail to help? Are they so insecure about the morals they live by and by which they raise their children?”

A year ago many western commentators were celebrating an Arab spring. The internet generation personified by Wael Ghonim, the Google marketing executive, would take over power from military dictators and absolute monarchs in democratic elections. Those of us who warned that political Islam would be the principal beneficiary of elections in north Africa and the Middle East were dismissed as scaremongers.

Ever since 9/11, opinions in the west have been sharply divided on the popularity and legitimacy of political Islam. A minority – and I am one of them – argued that Islamism as a political doctrine was held by the mainstream in most of the House of Islam and particularly among Arabs; that violence was inherent in Islamist theory; and that if Islamists won state power they would not deliver prosperity.

Hans Jansen was one of the three people permitted to give evidence at the trial of Geert Wilders last year. His testimony, which I subtitled and several volunteers were kind enough to translate, was some of the best thinking on the issue of Islam and the west I have ever read.

This video is part of my attempt to restore the best from my deleted youtube channel to MRCTV. It is difficult because my back-ups are all over the place largely. But when I find one I will try and restore it.

This is from June 2010 and also has Ayaan Hirsi Aly. 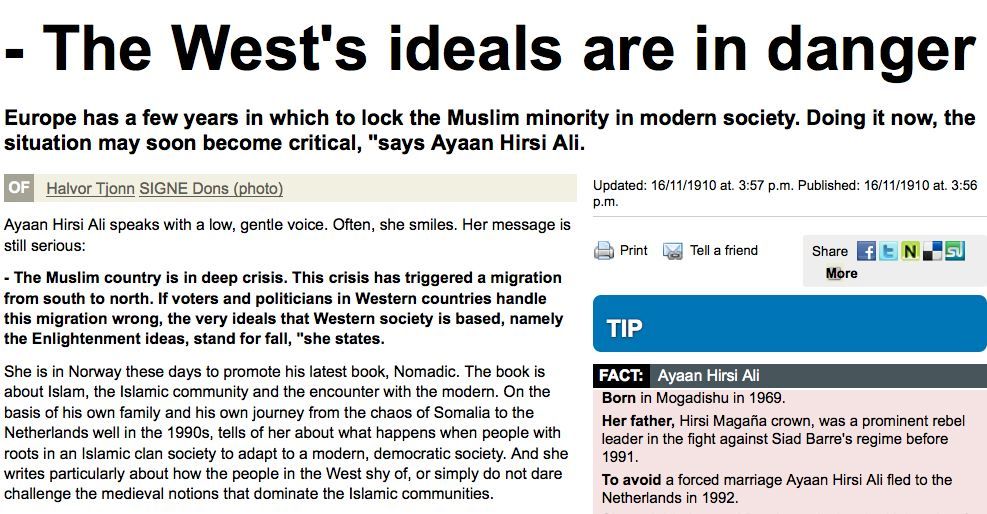 Once again, a brilliant expose of the factual nature of Islam today and its consequences to a secular West with an emphasis on women’s rights. This is just under an hour.

After many hours of working with the audio of this footage I managed to get it sounding much better and requiring less focus to get the speech. Also its all one file. This is the speech Ayaan Hirsi Ali gave at the DPP party meeting in Denmark Sept. 18 2010