A man has been charged with assaulting a police officer at a Manchester cafe where Covid-19 lockdown restrictions were suspected of being broken.

Police went to investigate claims of up to 50 people found inside the cafe in Burnage on Sunday.

Greater Manchester Police later said an investigation had begun after footage of an alleged altercation emerged.

A police officer was injured but did not require hospital treatment following the disturbance in Burnage Lane.

A “significant amount” of people who were “blatantly breaching” restrictions were discovered, before attempts were made to disperse the crowd, police said.

Officers also suffered verbal abuse from those at the scene.

GMP said footage of the incident, which circulated on social media, had been referred to its Professional Standards Branch.

It said while initial reviews suggested officers’ actions were reasonable, when assessed within the wider context of the situation it had been referred in line with policy.

One officer pins the victims hands behind his back. The second one starts smashing his face in using his handcuffs as a set of knuckledusters. They then later start strangling him
The third officer then watches.

(Please leave a comment when this evidence of the new/old police fascism is removed from Youtube so we can restore it somewhere else.)

Pay no attention. He gets nothing right at all.

(A couple of important notes on this video. While I find a lot of it mind blowing in some ways, he did use this scenario material to advance an ugly agenda. The quote attributed to Kissinger was never found to be anything he said, and all sources lead to neo-Nazis. Also the attempt to massage in the 911 conspiracy stuff is odious at best.)

We must remember to add him to our daily 3 minutes of hate if there is any energy left after Trump.

This is the document he is quoting from.

1. How totalitarian is the UK now? According to this tweet, you get arrested and jailed for exposing state propaganda as false.

Remember the video of the lass walking around the very empty hospital the other day? She was arrested and held in cells yesterday in Gloucester until 11:30pm for a public disorder offence for sharing an online video of an empty Gloucester Royal Hospital". #stasipolice pic.twitter.com/9lO8Zg3OQV

Police have confirmed an arrest has been made in connection with an incident at one of the county’s hospitals.

A 46-year-old woman has been arrested after a video was filmed at Gloucestershire Royal Hospital and posted online.

Officers from Gloucestershire Constabulary arrested the woman yesterday on suspicion of a public order offence.

She has been bailed until January on condition she does not to enter any NHS premises unless it is for an emergency or an appointment.

The woman has not been named.

2. Here is an interesting graph from Stats Canada. Even when you factor in increased suicides and increased drug deaths, 2014 was a deadlier year in Canada. 20202 seems about average. 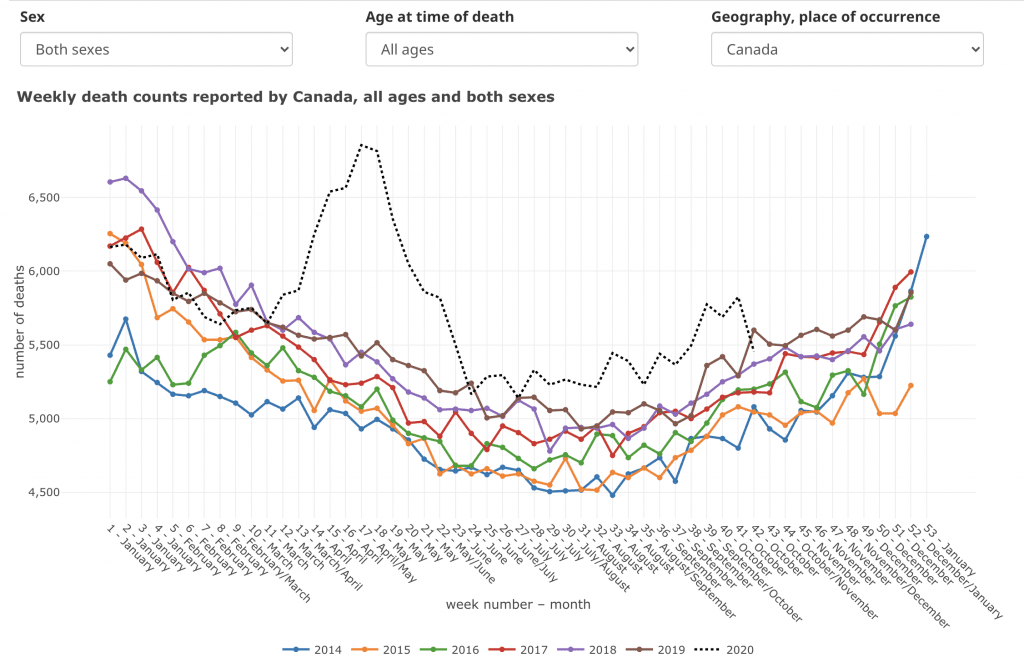 3. Twitter shows its dishonesty again. It is a FACT that over 100% of eligible voters voted in November. Saying so is stating a fact. But Twitter has to urinate all over any attempt to do so.

Try and like or retweet this to see how much effort Twitter puts into maintaining a narrative and suppressing truth.

4. There is a lot of news on the fraud that was the US election on November 3rd. This site for the first few weeks posted dozens of items per day that all seemed to be very good evidence of fraud. We also listened to, and cut and reposted some of the most credible and important witness testimony. The only reason we stopped, is because nothing appears to be being done about it. It is a fact that the election was stolen by the Democrats. It is a mathematical impossibility that the results are as presented. But when nothing appears to be done about it, and even corporations like Twitter and Google who are legally bound to be unbiased, tilt their mighty powers towards deception towards a united goal, the overthrow of the Constitutional polity of the US in favour of something that whatever else it may be, is far to the left of anything anyone would vote for, it gets difficult to keep posting these data points. It gets to feeling like beating yourself in the head. You know whats true. Its right in front of anyone who wants to look. Its beyond interpretation the evidence is so clear. But it changes nothing.

Listening to Red State Radio on my phone app, Talk Stream Live, I heard a great speech by Giuliani from Georgia just a day or so ago. So I searched for it on Youtube:

I still have not found the speech I heard on Red State Radio. It was very good. A hard hitting statement of facts about how much and what kind of cheating took place, and even to the extent that some counties may decertify the results. Google and Twitter are so deep in on the fix, in a nation of constitutional law, they would be indicted for treason.

In any case, many of our wonderful readers continue to find and post these items to the Reader’s links and they can be found there. Also the Epoch Times always has excellent articles with evidence of the fraud. For those not already discouraged, both places are gold mines of information.

5. The most important thing you can know about authority is if they knowingly lie to you. It doesn’t matter what the lie is, or why. Once you know they lie, you know a lot.

Thank you Richard, Rich, ML., Wrath of Khan, PC., Johnny U., Kim, and Many more who left thoughts and links in the Reader’s Links post.

For a better understanding of this event please see these two posts from Jihad Watch, itself blocked for the most part in Airstrip One. (UK)

UK: Jewish conservative’s door broken down, he is handcuffed and jailed on suspicion of “Islamophobia”

There will be more on this soon. In the meantime, see if this arrest for islamophobia can be compared to how Airstrip One police treat actual crimes.

“I have an idea!” said a proto-fascist, “Let’s bring in millions upon millions of staggeringly dangerous people to our democracy, women, daughters, concerts, public gatherings and institutions, and then use their presence as an excuse to utterly crush all freedoms that define a democracy!”

This is the full interview from the scene in Michael Hansen’s excellent film, Killing Europe which can be seen here:

April from Birmingham was racially attacked for being white, even with video footage yet no police officers has never attended for a statement.

Yet in this video the police came round to this man's house, to let him know his comments about brexit were visible online ?#Strange pic.twitter.com/FVMS7IUES2

(In communist Airstrip One it is illegal not to have all your public sympathies for an enemy of your people, culture, and history. Probably also your private communications)

Greater Manchester Police have arrested four people for comments made in person and online about the mass shooting in Christchurch, New Zealand.

The first reported arrest was of a 24-year-old man from the Oldham area for “malicious communications” on social media, with police alleging he was “making reference and support for the terrible events” and taking him into custody on March 16th.

The following morning a 38-year-old woman from Rochdale — site of one of Britain’s more infamous rape gang scandals — was arrested for what the force described as “a racially aggravated public order offence” involving “comments made online about the New Zealand attack.”

Separately, a 33-year-old man and a 34-year-old woman were arrested, also in Rochdale, on suspicion of racially aggravated public order offences following “a report of a taxi driver being abused and threatened by members of the public who were referencing the terrorist attacks in New Zealand” in the small hours of March 17th.

How many Muslims have been arrested for celebrating terror attacks against everyone else? How many for encouraging and supporting said attacks? Anjem Choudary was on the streets daily doing this as publicly as he could for years and now he is free after a short stay in Club Fed with personal bodyguards paid for by the state.

Update on GMP arrests relating to remarks made about New Zealand attacks https://t.co/pjYLzVXMsC

Here is a video on the event, the analysis within which, I do not fully agree. But the arrests are Orwellian and I mean that both literally and as a best case scenario at this point.

It should be mentioned that Katie Hopkins claims she was told,  that the fire started because migrants were illegally, (in the real sense, not the modern sense) preparing Ramadan feasts over actual fires in their apartments and the government covered that up with a story about an exploding refrigerator.

This makes the arrests far more sinister. Not only must we treat the fire as a sacred thing, but any attempt to view it differently…

It is time they officially changed the name of the place to Air Strip One.

Here is the actual news story, which utterly escaped me till PC posted the video above to the Reader’s Links.