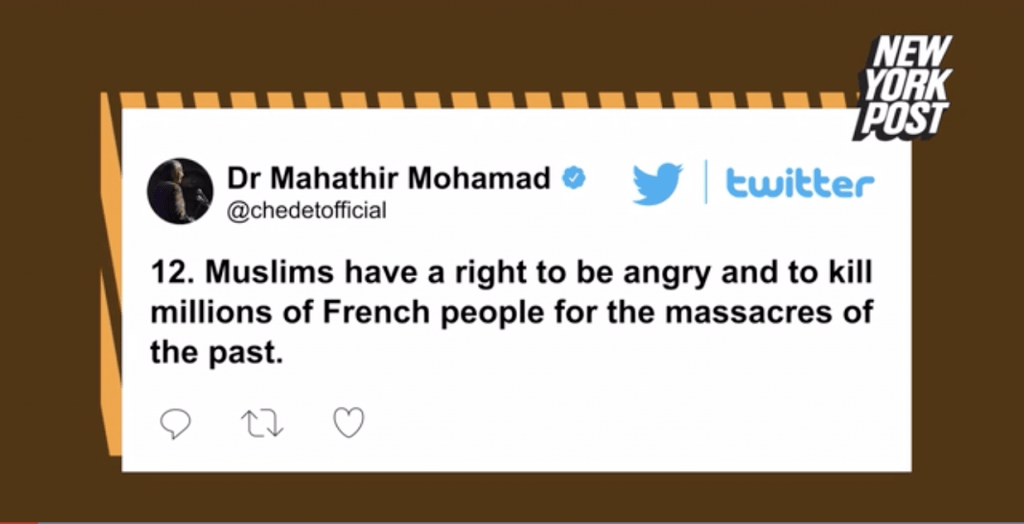 Notice what building is in the background.

Imagine if these girls had done this in a real sharia country like England. They would get months in jail and be conveniently killed, as Allah would want, after just three months.

KOTA KINABALU: The Sabah government is livid over the behaviour of two foreign tourists who were caught on video dancing in an indecent manner in front of the city mosque here.

The authorities have promised to take swift action against the tourists and their tour operator.

The nine-second video, which has been making its rounds on social media, is believed to have been shot by a passer-by, earlier today.

The video showed the women, in brief shorts and tops, dancing in an indecent manner on a concrete wall in front of the mosque.

“Once we identify their nationalities, strong action will be taken against them and the operator of the group who failed to brief and deter the foreigners,” he said.

He said the actions of the tourists showed their lack of respect to Muslim worshippers as well as the hospitality extended to them.

Whatever happens to them, they will be better-off than Kevin Krehan.

The UK government has still failed to pony up an explanation as to how he died while a guest of the state.

At the opposite end of the scale, and it would be fascinating to have a contest to name that scale, the Prime Minister of France, such as he is, and such as it is, faces criticism for dancing with an odd assortment of people doing a reproductive fitness display at the Palace Elisay in Paris. Some of those doing the display appear to be men, dressing and acting as if they are women doing reproductive fitness displays, which creates a sort of double or triple mockery of the gravitas of the location, as well as the women in the spectacle.

But the Malaysian shampoo add of today:

Malaysian shampoo commercial of 10 years ago:

The woman in this case is

The original clip without the commentary of this uploader can be seen here and I recommend it. I think people can work out for themselves the benefits and problems of this line of reasoning without help. If they cannot, then we have lost anyway.

On another post today, a short discussion took place about how muslims reinvent the word ‘defend’ as a rhetorical trick to justify out-and-out attacking people, arguing that it is defending the religion, to use force to make islam and sharia law the supreme organizing principle over non-muslims.

Please read this article about the pending implementation of sharia in another state within Malaysia and notice how the logic of the advocates is similar, if adjusted to the circumstances. One example:

Abdullah was responding to the stand of non-Muslims in Kelantan who are opposing the implementation of hudud in the PAS-governed state.

He said non-Muslims should not be so greedy to the point that they want to interfere with the exclusive rights and interests of the Malays and Bumiputera, who are the original inhabitants of the country.

Non-Muslims, he argues, are being greedy by expecting the continued (nearly) equal rights under the law when they should expect to be dhimmis as it is ‘rightfully’ an Islamic nation. Of course to muslims, “the whole world is a mosque” so there is a rational for the conquest and forcing of Islamic supremacy and sharia world-wide.

The logic is very similar to classic islamic logic which justifies attacking autonomous non-muslims in order to force sharia and islamic supremacy on all.

To put what the gentleman in the video above said to some practical relief, observe the video below: (Thank you ML)

In the links and news post below, there is an item that I think deserves special focus. The story on Malaysia withdrawing immigration status to a muslim who allowed a mosque to be used for Buddhist prayer services.

I find this story as well as the other examples cited in the article to be much more important than even many aspects of the horror we see every day from Egypt in fact.

I suspect that in order to avoid cognitive dissonance, a sensation which ranges from surreal to downright unpleasant, people will force things to fit their pre-existing models of the world. This is no flaw of a person, but is part of the basic set of operating  instructions. Seeing the horror in Egypt for most legacy-media watchers probably changes the minds about the nature and role of Islam in a society of very very few people as its easy to force it into something more familiar, such as domestic historical civil wars or other more classical geopolitical models which allow us to continue a feeling of personal and national safety and dismiss Egyptian horror as being a problem of ‘somewhere else.’

But with the Malaysian stories we can see several examples of a country commonly thought of as ‘moderate’ implementing sharia punishments on behaviours that are profoundly revealing of the islamic-sharia zeitgeist, as well as an example of ‘hijra’, or the determined escalation of degrees of islamic control in all places and by any means.

This is much more important than the violence in Egypt because this demonstrates the thinking which causes Egypt-style violence everywhere it gets sufficient authority that it feels it to be worth the risk. And, much more importantly than temporary violence no matter how dramatic, the death of rational inquiry, reason, freedoms, classically liberal values such as equality for all before the law, and so on.

The fact that a muslim had his immigration status revoked because he allowed a Buddhist to use a mosque as a space for meditation (to the best of my knowledge, Buddhists do not pray in the Western sense and this itself shows how Islam does not care about the pesky details) shows Islamic supremacism in perfect clarity. This is something we see everywhere including Ottawa where the ‘multi-faith’ prayer space at the Ottawa Airport is always kept free of any crosses or non-Islamic artifacts that might corrupt its islamic purity. But this is covert action and not official yet. So its more difficult to make a case about it. Malaysia however, took it to the federal level.

Then we have from the same article these examples:

Last month, prosecutors charged two non-Muslims with sedition and inciting religious enmity after they posted a photograph on Facebook of themselves eating pork while extending greetings during the Islamic holy month of fasting. They face up to eight years in prison if convicted. Consumption of pork is forbidden for Muslims.

Police also temporarily detained a Muslim woman featured in a YouTube video that showed her celebrating the end of the fasting month with her dogs, which some Muslims consider unclean.

Now we see in higher resolution how the state intends to use what are the more arcane aspects of islamic doctrine to force the public into a rigid compliance of all of them. One must not only respect Islam, but one must be aware of all the aspects of it and increasingly move towards greater and greater adherence to the most picayune details of it if one wishes to avoid prosecution and indeed, persecution.

While it is surprising in some ways that these penalties were all meted out on muslims, it is central dogma to islam that these punishments for these crimes must apply at least equally, and usually more so, to non-muslims. And this is why it should concern us.

Story at Halal Porkchop. Original Here
Hmmm and it makes me wonder…

Check back in an hour or three.

Tolerance. “Fasting month, so pupils told to take recess meals in bathroom – Updated,” from the Malaysia Edition, July 23 (thanks to Pamela Geller):

A decision by a primary school administration to order its non-Muslim pupils to have their meals during recess in what appears to be the school’s shower room has gone viral and angered netizens.

Meanwhile the suspect’s 33-year-old wife said her husband had showed a change in attitude over the past two months “I thought he wanted to change for the better and to get closer to Allah ” she said when met at the hospital — Bernama.

A Malaysian army commando on a truck moves on the way to joining an assault near the area where a stand-off with Filipino gunmen took place, in Tanduo village, Lahad Datu, Borneo’s Sabab state, Malaysia on March 5, 2013. Photo: AP

Malaysia on Tuesday launched an attack with jet fighters and soldiers on up to 300 Filipino invaders to end a bloody three-week standoff. Prime Minister Najib Razak had declared the operation was ‘‘weeding out’’ the holed-up followers of a self-styled Muslim sultan from the Philippines who had come to assert a long-dormant claim to the Malaysian state of Sabah.

“As the intrusion prolonged, it was clear that the intruders had no intention to leave Sabah,” Malaysian Prime Minister Najib Razak said Tuesday. “The government must take action to defend the country’s dignity and sovereignty.”

Police moved cautiously in an area slightly larger than New York City’s Central Park to find followers of Jamalul Kiram, a Filipino who asserts he’s the sultan of Sulu. Authorities have yet to release a death toll from Tuesday’s aerial and ground attacks, which came after earlier clashes between Malaysian police and Kiram’s followers killed 31 people.

The Penang Chief Minister asks Penang’s police chief to ensure that Sunday’s ‘festival’ does not happen.

“I would like your cooperation to stop them and increase the security level to ensure public safety and harmony,” he wrote to Penang police chief Abdul Rahim Hanafi in a letter made available to the media.

“We hope that the police can control the situation to avoid any untoward incidents.”

Lim’s call came a day after the discovery of a flyer urging Muslims to attend what the group called a “festival” to burn Malay-language Bibles at the Bagan Luar Municipality field in Butterworth.

The flyer reads: “Our children and grandchildren will end up being apostates if you want to wait for our impotent government to act.