I think the sentences of other Toronto 18 members [time served and 2 more years in jail] has more to do with these admissions of guilt than say, actual remorse and shame for the crimes of wholesale slaughter they wished for the people of Toronto. 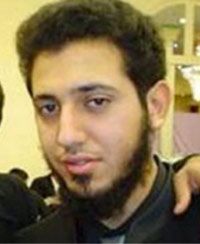 CBCNEWS…Zakaria Amara pleaded guilty Thursday to charges related to the Toronto 18 terrorist plot to set off three fertilizer bombs, two in Toronto and one at an unnamed Ontario military base.

Amara, 24, has been alleged to be one of the ringleaders in the plot to recruit and train extremists to carry out the attacks, which never transpired. He is the fourth adult to admit guilt in the affair.

Justice Bruce Durno entered convictions against Amara on those counts before proceeding to sentencing. An agreed statement of facts is being read into the court record.

In all, 17 men and youths were arrested in the Toronto area in June 2006 and detained following an investigation by CSIS. An 18th person was arrested in August 2006.

The offences allegedly took place between March and June 2006 in Mississauga and a rural township near Orillia, Ont.

The Crown alleges that the group’s potential targets were the CN Tower, the Toronto Stock Exchange and the Toronto CSIS office.

Seven of the 18 people arrested have since had their charges dropped or stayed. Another six are in custody awaiting trial.

Last Friday, Ali Dirie was sentenced to seven years after pleading guilty to taking part in the homegrown terrorist group.

The 26-year-old’s sentence amounts to two years after time served is factored.

In September, Saad Gaya, 21, pleaded guilty to intending to cause an explosion for the benefit of a terrorist group and is to be sentenced next month.

Gaya and Saad Khalid were arrested while unloading bags labelled “ammonium nitrate” from a truck driven by an undercover police officer.

Khalid, 23, pleaded guilty in May and was handed a 14-year prison sentence. He was given seven years’ credit for pre-trial custody and can apply for parole after less than 2½ years.

Last year, a judge found Nishanthan Yogakrishnan, 21, guilty of participating in, and contributing to, a terrorist group.

Although 17 at the time of the offences, he was tried as a youth but received an adult sentence of 2½ years before being released in May in consideration of time served before trial.