To begin with, until Trudeau, it was a general truism that making a choice precludes others. One simple example is in the marriage vows. ‘Do you swear to forsake all other…’ etc. Marrying one spouse meant that you had made a choice and having romantic or sexual relations outside of that oath, would be cheating.

Something happened to this most obvious and empirical idea. Some people began to feel that their choices should not in any way limit them from other choices, where normally it clearly would. 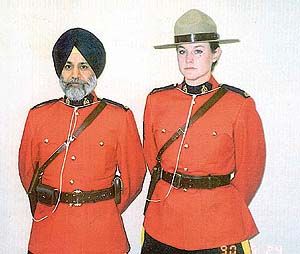 The Sikh’s lobbied to allow RCMP officers to be able to wear the traditional Sikh turban with the uniform of the federal police force of Canada. The Conservative Government of Mulroney allowed this to happen. This meant that the door was now swung wide for all who wished to indulge in inconvenient cultural and religious practices and have Canadian civilization and culture adapt to it.

This remains the utter heart of the issue. If we went back to the simple notion of freedom and the consequences of ones choices, choices would be made in a logical manner.

France, Canada, even Egypt are currently struggling with the notion of banning the Burka, a non problem if each state simply refused to accommodate. For example, if a woman wishes to wear a burka, not that her family or husband insists on it, but she freely chooses to at all times, then she cannot drive, vote, buy anything that requires identification, take a bus, or do anything else where the burka causes safety concerns or identification is required. Ultimately, the burka will not be worn at all times and eventually not at all.

Robert Spencer here explains how US airports may install foot-baths for Muslims to wash their feet. Clearly no other religion has demanded to be so accommodated. If Muslims need to wash their feet five times a day then perhaps they should not go to places where this is not possible. I know of very few people that will lament the lessened amount of Muslims on aircraft. However we all know not one Muslim will refuse to fly because he has nowhere to wash his feet. Even so, that isn’t the point. We cannot allow ourselves to start arguing what is and what is not the real tenants of someones irrational beliefs. The purveyors of those beliefs will always win those arguments because they make them up as needs be.

There is one point on which I fundamentally disagree with Mr. Spencer however.

If we merely stop accommodating peoples absurd and counter productive choices, and allow reality to set the agenda, we will not have to compromise our own fundamental and extremely important values, such as freedom to wear what you want and freedom of ‘religion’, in as much as Islam is a religion.

To summarize, the solution may be simpler and perhaps even less bloody than many of us fear.

Get back to the real principles that made our nations so successful. Do not fund alien systems. Do not allow your own very important cultural institutions such as a federal police force to become confused with symbols which may not be as impartial as necessary. Would a ‘Palestinian-Canadian’ feel he was being treated fairly if the RCMP came to his door and the officers were wearing an Israeli arm band for example? or the reverse?

Our civilisation has been so successful because it has dealt with reality and done so in an efficient manner. It has been so successful that we have allowed ourselves to indulge in very expensive ideas. The cost of those ideas now threaten to destroy everything we have built. The choices are ours now. We can destroy ourselves by allowing an ideology, granted a malignant one like Islam, to destroy us because our loss of identity allows it, or we can destroy ourselves like France by passing illiberal laws on dress codes which only opens the door to the destruction of freedoms for benign cultures who actually contribute to France. Alternatively. we can simply go back to first principles. Allow individual freedoms. Lessen governments roles in our day to day lives. Make sure that no institutions of state make exceptions for people’s choices and let individuals suffer the consequences of their own practices (so long as those choices do not threaten the well being of others) or, as will likely be the case, we can wait and do nothing until a bloody three front civil war ravishes us. Three front because it will be Muslims on one, our own government desperately attempting to maintain the illusion of ‘good governance’ on the other, and people fighting for their own relatively indigenous culture on the third.

12 Replies to “How can Canada save itself?”