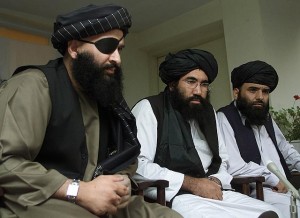 TIMESONLINE…President Obama is prepared to accept some Taleban involvement in Afghanistan’s political future and is unlikely to favour a large influx of new US troops being demanded by his ground commander, a senior official said tonight.

Mr Obama appears to have been swayed in recent days by arguments from some advisers, led by Vice-President Joe Biden, that the Taleban do not pose a direct threat to the US and that there should be greater focus on tackling al-Qaeda inside Pakistan.

The official, speaking anonymously to the press about Mr Obama’s internal discussions – a tactic that is causing dismay among some senior military officials – said the president’s final decision on his war strategy and troop levels is still at least two weeks away.

Yet if Mr Obama fails to dispatch at least a significant number of the 40,000 troops requested by General Stanley McChystal, he will have ignored the wishes of his own ground commander and will face fierce attacks from Republicans back home.

After two days of discussions on the critical role Pakistan must play if the US is to succeed in Afghanistan and the region, Mr Obama has been presented with conflicting arguments over whether Afghanistan would again become a safe haven for al-Qaeda if it fell to the Taleban.

Mr Biden has argued for months that with the cooperation of Pakistan, which in recent months has shown a far greater willingness to take on militants in the lawless border regions, al-Qaeda can be contained and even destroyed inside Afghanistan.

He is also arguing that the Taleban pose no direct threat to the US and therefore no more troops should be dispatched there and that, even if large swathes of the country fall under Taleban control, they will not provide an already weakened al-Qaeda with safe havens, as they did before the September 11 attacks.

In a sign of how politically astute the Taleban has become in deciphering the debate raging inside the White House, the insurgents issued a statement on their website declaring that they have “no agenda to harm other countries.” It appeared to be a bid to persuade the West that they were no longer interested in working with al-Qaeda.

Mr Obama, who is now holding his ground commander’s official request for up to 40,000 more troops in his hands, has spent the past 48 hours focused on that central question: whether the Taleban poses a direct threat to America. He is keeping his cards close to his chest but appears to be striving for a middle ground strategy between Mr Biden’s and General McChrystal’s, with the possibility of sending a smaller number of troops to help train the Afghan army.

General McChrystal, together with Republicans and some moderate Democrats, insists that a full counter-insurgency strategy is the only option to avoid losing the war in Afghanistan, and that defeat will lead to the return of the terror network. Mr Obama’s lengthy reassessment of that strategy – which he announced in March – is triggering increased misgivings inside the military.

Army officers who gathered at a convention in Washington earlier this week expressed dismay over thinly disguised rebukes given to General McChrystal last weekend by Mr Gates and James Jones, Mr Obama’s National Security Adviser, after the ground commander said in a London speech that a scaled-back war effort would fail.

Others also expressed concern that the mission was still ill-defined, and that Mr Obama’s reassessment could damage the campaign by demoralising the troops and unnerving allies.

On Saturday, Mr Obama holds his fifth meeting with his full war cabinet on Afghanistan, when he is expected – for the first time – to address the issue of troop numbers.