The Daily Mail says he was possibly in the process of converting to islam. This looks more like he was the leader of a jihad cell to me.

Friends of Boyle’s previously said Boyle had an ‘academic interest’ in terrorism and may have been converting to Islam when he was captured. Somewhat like street prayers, but it leaves a more lasting mark.

That makes it more than a passing interest and a possible conversion, although yes, this photo may have been years later.

There are two major red flags that when taken together become a RED ALERT. On his forehead sits a zebiba, caused by friction generated by rubbing the forehead on the prayer mat multiple times per day during Muslim prayers.

The second cause for concern is the beard without a mustache. Taken separately, these traits may or may not reveal a Muslim fundamentalist.

However, when a Muslim has both, the odds of having a fundamentalist in your midst go up exponentially:

It may be that their “hiking” expedition in Afghanistan was more than looking for poppies or playing goat polo.

At least 130 people, most of them children, were killed on Tuesday when about six Taliban gunmen stormed an army-run school in northwest Pakistan, in one of the bloodiest terror attacks in the country in years. This video footage shows an Arab jihadist surrounded by men carrying weapons, some who are riding horses, reading a statement from the Islamic Movement of the Taliban, which was originally founded in Afghanistan and headed by Mullah Omar.

The speaker vows not to let any of the Nations of Infidelity – whom he specifically refers to as Shiites and Christians – enjoy any safety or security. He also vows to implement strict Sharia law in Syria.

Full disclosure, I have not watched this yet.

But yesterday alone, a good friend told me multiple times how valuable a document this is in terms of exposing the ethos of the Taliban inclined. So I was delighted to find Don L’s email with a link to the video which saved me the trouble of finding it and making it generally available. I am looking forward to seeing it later myself.

KABUL – Insurgents wearing Afghan army uniforms launched a suicide attack and stormed a courthouse Wednesday in a failed bid to free Taliban inmates, killing at least 44 people, half of them shot in the basement.

The attack — one of the deadliest in the more than 11-year-old war — began about 8:30 a.m. when nine men wearing suicide vests drove into the capital of Farah province in western Afghanistan, evading checkpoints by using army vehicles, according to the provincial police chief. The standoff ended some eight hours later when the last gunman was killed.

Insurgents have stepped up assaults targeting the Farah provincial government in recent months as they vie for control of an area bordering Iran to the west and Helmand province to the east. Farah has become increasingly volatile as the site of a growing drug trade after military offensives in neighbouring areas.

More info at the youtube pages where the videos live

Good thing we gave him all that money and weapons. Personally I am looking forward to seeing the Russians move back in there at some point soon.

Afghan President Hamid Karzai has held talks with the Qatari government. Karzai was in the Gulf state reportedly to discuss the opening of a Taliban office there.

Karzai met on Sunday with ruling Qatari Emir Hamad bin Khalifa al-Thani, after Kabul had agreed in principle to support the opening of a Taliban office in the Gulf state, under the condition that the militant group severs ties with al Qaeda and ends its support for terrorism.

In its January 9, 2013 issue Urdu daily Hindustan Express reported that leader of Tehrik Taliban Pakistan Waliur Rahman Khan announced sending of terrorists in Kashmir and pledged to fight for the imposition of Sharia law in the State.

The US has already declared a bounty of $50 lakh on Waliurrahman for his involvement in the killing of CIA officials in Afghanistan in 2007. Pakistani Taliban chief Hakimullah Mehmood released a video in which he states to begin Jihad in Kashmir, India and the US.

This appears to originally be a Ted Talk, taken from this facebook page. H/T Shabnam for this one.

Gunmen have killed six Pakistani female aid workers and a male doctor in what appears to be the latest attack by Islamic militants on teams involved in public health campaigns.

Recent days have been violent in the troubled country, with dozens dying in a string of terrorist attacks. Analysts blame many of the strikes on militant groups keen to demonstrate their ability to cause casualties and destruction after the government rejected the Taliban’s call for ceasefire negotiations late last month.

“They are signalling to the people that the pain they are suffering is in fact the government’s fault because their offer of peace was rejected,” said Ejaz Haider, of the Jinnah Institute, a thinktank in the capital of Islamabad. “There is likely to be more violence as they ramp up their campaign in coming weeks.”

The militants have been stung by a loss of public support following indiscriminate attacks last year, a lack of economic development in the areas where they are strong, deals concluded by the authorities with some major local extremist commanders, and ongoing strikes by US drones. Gunmen targeted teachers, including six women and a man, working at an NGO-operated school.

SWABI: Seven teachers, six women and a man, working at an NGO-operated school were shot dead on Tuesday in Swabi, Express News reported.

The incident took place in Sher Afzal Banda area in Tehsil Chota Lahore, when unidentified gunmen targeted the teachers who had just exited the school building.

Earlier in December 2012, the office of an NGO in Muhallah Gulbahar in Swabi was destroyed when a bomb exploded near its building.

In recent months, a number of government and NGO offices as well as CD shops have been targeted by assailants in the relatively peaceful district. So far, police have been unable to arrest any culprit behind these incidents.

An up close opportunity to watch Darwinian evolution in action. H/T EDL Buck

The Taliban murdered five women polio health workers in a series of attacks in Pakistan today.

The victims were shot in the head at close range, two of them as they administered vaccine drops to young children.

The killings halted a polio campaign that international health officials say is vital to contain the crippling disease but which the Taliban claim is a cover for US spies. 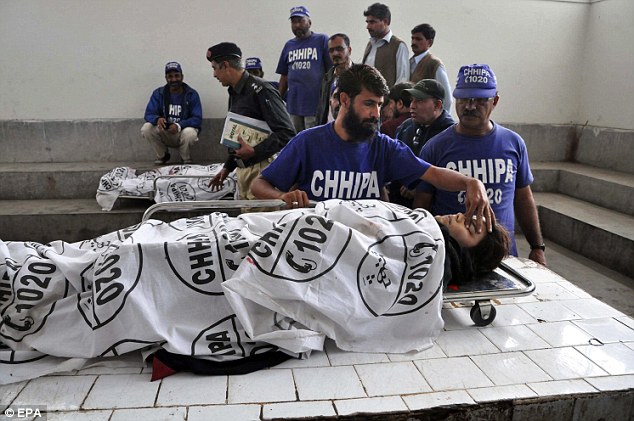 Rescue workers move the bodies of two of the Polio vaccination workers to a mortuary after four of the aid workers were killed in Karachi, Pakistan, today 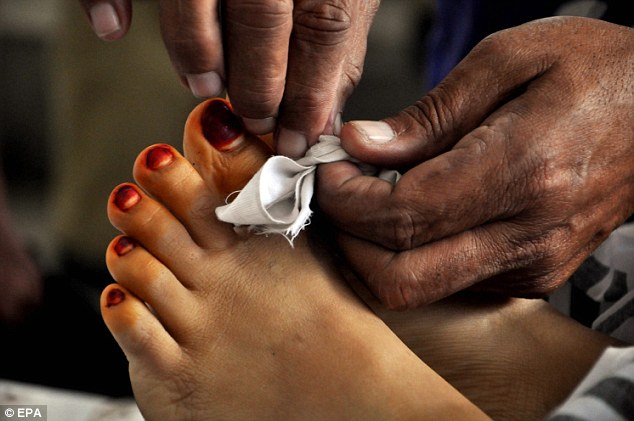