An original translation by Our French correspondent, Nathalie

From this French News Site Fadhel Achour, the general secretary to the trade union for the managers and staff of mosques, announced on Wednesday July 1 2015 that police forces making searches in all parts of the country have uncovered caches of weapons in forty mosques.

Interviewed on the “Midi Show” programme broadcast on “Mosaïque Radio”, he declared that 190 mosques had been erected since the revolution, 90 of which had contacted the authorities in order to legalize their status. The 100 remaining mosques, 80 of which spread incendiary Takfirist speeches, have refused to acknowledge the authority of the Tunisian government.

Fadhel Achour further declared that things might have been much worse but for the Ministry of the Interior whose intervention helped to rescue some mosques from radicalization.

He added that the government of Mehdi Jomaâ had promised to end the problem in 90 days, a promise that remains unfulfilled to this day.

He proceeded to add that during Noureddine Khadmi’s time in power, several preachers and imams had been posted to some mosques, and that amongst those, some belonged to the Salafist school, and some did not even acknowledge the Maliki school.

Thank you Oz-Rita for the find and the translation

At least 27 killed in attack on Tunisian tourist hotel: ministry: The Daily Star

TUNIS: At least 27 people have been killed in an attack on a tourist hotel in the Tunisian beach resort of Sousse, an interior ministry spokesman said Friday.

Details of the attack, which a local security source at the scene and radio reported was on the Imperial Marhaba hotel, were still emerging.

(We know very little about this attack so far. But one thing we do know. Any second now, we will be reassured by people who know as little as we, that this has nothing to do with islam)

An original translation by Nathalie

In a video clip posted online yesterday, the leader of the Ansar Chariâa terrorist group, Ouanes Fékih, sent a message to the “young members of the Ettawhid movement”, in which he calls for patience and urges them to carry on “defending their religion” by practising Jihad against those he calls “Taghout”. Fékih also stressed that the days to come will be eventful, implying that planned terrorist attacks are in the making.

This message was published on Tuesday, March 17th 2015, during the day, before the terrorist outrage in the Bardo museum in Tunis, which left 8 dead according to preliminary reports. He concluded the message with a prayer addressed to the “brothers imprisoned in Tunisia”, as some information, still to be confirmed, suggest that the terrorists are demanding the release of imprisoned jihadists in exchange for the hostages held captive in the museum. END_OF_DOCUMENT_TOKEN_TO_BE_REPLACED

Trying to find the whole documentary. The link at the end of this trailer was overly optimistic.

More than 40,000 people massed Tuesday outside Tunisia’s National Constituent Assembly to demand the resignation of the government led by the moderate Islamic movement Ennahda.

The elected body had earlier suspended its work until the government and opposition open negotiations over a showdown sparked by the July 25 murder of opposition lawmaker Mohamed Brahmi.

Many of the protesters carried pictures of Brahmi as well as another opposition politician, Chokri Belaid, who was gunned down in February.

Boubakeur E1 Hakim (photo) is strongly suspected to be responsible for the recent assassinations of tunisian opposition members, Mohamed Brahmi and Chokri Belaid. The suspected killer is born in France and has been condemned for having organised jihadist groups towards Iraq.

Discovered by French intelligence in 2003 during demonstrations against the war in Iraq, Boubakeur was identified as one of the people responsible for the jihadist gang “filiere des Buttes-Chaumont” in Paris. This group facilitated the trip for foreigners who wanted to fight American forces in Iraq. The suspect, already sought for arm smuggling to Libya is also thought to be implicated in the assassination of another Tunisian opposition member in February 2013.

Boubakeur El Hakim, who will be 30 on the 1st of august, is born in Paris. In 2008 he had been condemned to 7 years prison. The Criminal Court declared that he had “had a combatant role” and “incited young Parisians of foreign extraction” as a “facilitator” for their passage to Iraq, and acted as a “supervisor”. He was freed in 2011.

This case, as so many others, reminds us what a dangerous vector for Islamic terrorism the mass immigration is.

Given that it was Montreal I’m surprised they didn’t just start selling beer and wait for them to finish. More here. H/T M

Although the Tunisians have apparently already released her.
Need to check the times on this. Did they protest before or after she was set free?

Here she is being set free apparently

Whatever else this is, it took more balls than anyone had who was passing by the slaughter of the British Soldier last week.

Black smoke seen billowing from the US Embassy in Tunis. (@7amidi7, Twitter/Screengrab)
What do you think?Of the 73 protesters arrested after storming the US embassy in Tunis last September, a judge convicted 20 and released them with two-year suspended sentences.A lawyer representing some of the accused told The Associated Press that a judge convicted them on Tuesday night.

Four protesters died during an attack carried out by thousands on the embassy and a nearby American School, Agence France-Presse said.

Lawyer Slah Barakati called the proceedings a show trial for Americans and Europeans.

“These protests were part of a spontaneous reaction throughout the (Muslim) world against attacks on our sacred symbols,” he said, according to AFP.

Police opened fire on the crowd, in which Reuters said demonstrators set fire to the buildings, stole computers and threw rocks at police.

The country now needs an estimated $2.5 billion to kick-start its economy, Reuters said, and is looking to the US for aid.

Amina of Femen was turned away by the citizens of Kauirouan where she was found this Sunday May 19, 2013 in the neighbourhoods of the Okba mosque, supposed place of the Congress of Ansar Sharia.

According to witnesses on site, she wore indecent clothing and she wrote “FEMEN” on the cemetery walls facing the mosque, her acts were described as provocative. Security force agents intervened to prevent her from being attacked and put her in one of their vehicles to assure her protection, reports radio Shems Fm.

Yesterday M sent in an article about how Salafists were planning to march for sharia and islamic rule within Tunisia, and many didn’t want them too, and banned the march and they, the salafists swore they would anyway. And they did.

More videos and news links will be posted here and in the comments.

Tunisian police have clashed with radical Islamists in a Tunis neighborhood, after Salafist movement Ansar al-Sharia told its followers to gather for its annual congress. The move defied a government ban.

Hundreds of Salafists erected barricades in the streets of Ettadhamen, a poor neighborhood on the western edge of Tunis on Sunday. The crowd threw rocks at police, who fired tear gas canisters at the demonstrators.

One protestor has been killed in the skirmishes, according to Tunisia’s state news agency. The AFP news agency has reported that 11 police and three protestors have been injured.

The area saw clashes last week between the Salafists and Tunisian security forces, as they moved to stop the extremists from setting up tents from which to preach and disseminate their ideas. Click for balance: 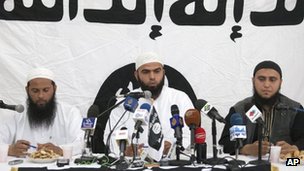 I wonder if this is how they invented the Tuna Salad

Tunisian police fired tear gas to disperse Salafist Muslims in a residential area in southwest Tunis on Saturday, after they tried to set up tents to preach in, the interior ministry said.

“Security forces intervened with force to disperse between 200 and 300 people who wanted to set up, without prior authorization, tents around and inside the mosque in Sidi Hassine Sijoumi,” interior ministry spokesman Mohamed Ali Aroui told AFP.

“Police fired tear gas to disperse them as they were throwing rocks and petrol bombs,” Aroui said, adding that calm had been restored by late Saturday.

Tunisian news agency TAP, however, reported “violent clashes” between police and 1,000 Salafists who had come to set up large tents in the area.

TAP said the clashes erupted after prayers in the afternoon around the Bilal mosque in the Sidi Hassine Sijoumi area, where the Salafists used knives and Molotov cocktails.