From what looks like an ANTIFA site, Enough is Enough

After a group of fascists had splitt off from a mass rally of nationalists and fascists, they attacked the squatted Libertatia social center in Thessaloniki, Greece.

After a group of fascists had splitt off from a mass rally of nationalists and fascists, they attacked the squatted Libertatia social center in Thessaloniki, Greece.

According to the cops around 100.000 people attended at the nationalist demo in Thessaloniki today, including many fascists. After the demo started under the statue of Alexander the Great, a large group of fascists attacked the social center “The School”. The cops didn’t stop the fascists during their attack against the social center School (video below). Anarchists repelled the fascist attack and the fascists had to retreat.

(The article continues with near pure-value judgement and hyperbole for some paragraphs. Greece does have a lot of violent national socialists however. It appears to be much like the Lilliputian street wars in pre-war Germany between the National Socialist NAZIs and the international-socialist, communists in Greece, where both groups agree on one thing. The big enemy is the classical liberal.)

I like how they use the term, “Ultra Nationalists” because the media has pretty much used up far right wing to refer to classical liberals.

I wonder what they call Jobik? Of course genuine Nazis would have to be far left wing cause, well thats what they were.

Interesting. One would imagine that feeding illegals would actually be the crime. They are after all, illegals.

UPDATE: The Greek Government used violence to stop Golden Dawn from feeding people, because they only chose to feed Greeks. Better that everyone starve than discriminate for your own countrymen, even when the people they refused were illegals according to one article.

what better definition of irrational leftism can one think of.

I would also like to know how the GD handing out food is thuggery while attacking them and forcing them to stop feeding people is somehow anti-thuggery.

Yes, I know GD are Neo-Nazis. Yes I know they are a treatment that can be worse than the disease. But if you want to rocket them to leadership then treat them like that.

I hate to say I told ya so but…

A makeshift bomb exploded at the offices of the far-Right political party Golden Dawn near Athens in the early hours of Tuesday, ripping through a wall and smashing the windows of an adjacent building but causing no injuries, police said.

Police stand guard outside the Golden Dawn offices after the explosion Photo: REUTERS

By Alex Spillius, and agencies

A police official, who declined to be named, said the attack was most likely carried out by a far-Left group. “It was a powerful blast that caused a lot of damage,” he said. “It looks like [domestic] terrorism.”

The device packed with dynamite was placed outside the party’s local offices in Aspropyrgos, an industrial suburb west of Athens.

Golden Dawn seems to have posted video to what looks like its own youtube channel of the aftermath of the explosion. Not subtle.

Hermes watched the whole 55 minute documentary for us and translated about 7 minutes of it which we titled and posted here. Here is a link to the whole documentary for anyone who would like to see it all (in German) and although the idea was to only include the translated bits, there was a short segment showing Greece’s Golden Dawn that, while not translated or subtitled, I couldn’t resist including as it pretty much settles any dispute about their ideological roots.

Thank you Hermes and Gates of Vienna for all the work involved in this. 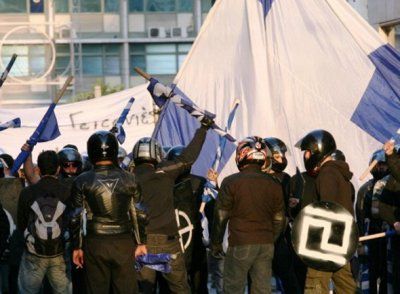 An MP and dozens of supporters of neofascist Chrysi Avgi (Golden Dawn) have attempted to prevent police from detaining some 400 immigrants in the grounds of an army camp in Corinth, west of Athens.

Officers escorted the migrants to the camp after an early morning operation that was part of the Xenios Zeus campaign to tackle illegal immigration. Almost 11,000 migrants have been detained since the clampdown began earlier this month, leading to nearly 2,000 arrests.

Golden Dawn MP Efstathios Boukouras and dozens of the party’s supporters protested the transfer of the detained migrants to the camp, which is active.

In a statement, the ultranationalist party said it opposed military facilities being turned into “tourism centers for illegal immigrants.”

Local mayor Alekos Pnevmatikos has called a meeting of the municipal council on Thursday evening to discuss the matter. There were unconfirmed reports that Corinth Municipality cut off the camp’s water supply and is refusing to collect its garbage.