Thank you MissPiggy for finding and titling this one.

Another example of the galloping micro border issue, the requirement for ‘ID’ (I’m sure a passport will do) to access German Swimming pools.

A swimming pool in the German city of Düsseldorf has been forced to introduce mandatory ID card checks in an effort to stop sexual assaults and rowdy behavior by migrant youths that has required the police to be called out on numerous occasions.

Following a crisis summit between administrators, the mayor and the police chief, an online ticket system linked to people’s IDs has been established to control who is allowed to enter the pool.

“In Rheinbad we have introduced an identity card for all visitors,” said Düsseldorf Mayor Thomas Geisel. “Those who do not comply, will not be let in. It is absolutely unacceptable and inconceivable that families who want to spend their free time here are harassed by youth gangs.”

As we reported earlier this month, the pool had to be closed twice after hundreds of male migrants harassed a family, prompting a huge police deployment.

Last Friday, the pool had to be cleared again as around 60 North African migrants began engaging in aggressive beahvior. Outnumbered, the six security guards on patrol had to call police for backup. 20 officers arrived and the pool was closed.

Sweden now has a registry where people who are “guilty of wrong-think” can be looked up. And if you are on that registry, there will be consequences. Wrong think by the way, includes people who speak openly about the population replacement by migrants in a less than glowing way. 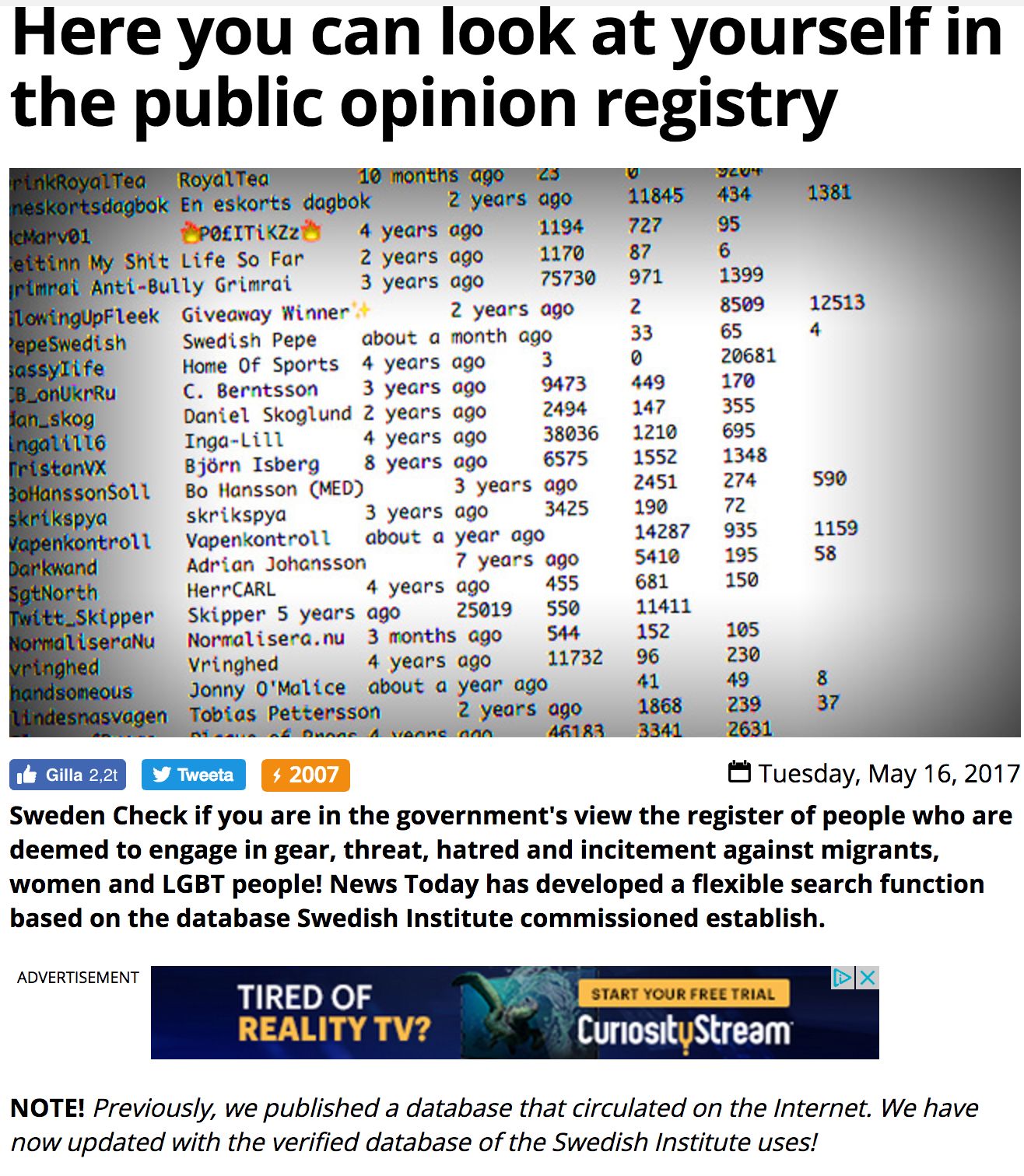 Lauren Southern has found herself on that registry:

Oh boy ~ the Swedish gov put me in their registry of people who engaged in threats, hatred & incitement against migrants, women & LGBT. pic.twitter.com/VLcwAi9BFI

Clicking this link to her tweet should also show you replies and other people who are on this list.

From a Google translation of the article linked at the top about this registry:

“The authority justifies view the registry to those listed expressed objectionable views.

“About 12 000 international and Swedish accounts dedicated to the drive, threat, hatred and incitement against migrants, women and LGBT people, but also against organizations involved in human rights. These accounts often have right-wing and / or neo-Nazi orientation and excites even violence, “the Authority on its website.”

I can’t exactly determine what the consequences of being on this list are. But I am certain of one thing. As time goes by the list will either be destroyed, just like the Canadian long gun registry was no doubt (which is to say it never was destroyed despite orders from the PMO) or the consequences to people in this list will grow from simply not being allowed in the country, having all electronic communications blocked in the country, to Seth Rich.

The resistance is just starting to form out of the mist of disbelief as to what is happening to the Western World. And the left and Islam, which has always been several steps ahead of us, must have prepared themselves for our awakening. This list looks like an early stage of that preparation.

You know your country is screwed when @RubinReport is put on a government watch list for “inciting hate” against the LGBT community :^) pic.twitter.com/H3o069xhSd

Here is the Swedish Database which includes of all people, Thomas Sowel, or a fan account of his that just tweets Sowel quotes.

The title of the database is:

(At this point its extremely important to understand that the Neo-Marxists/Alt left etc. will start out with a definition of something that everyone can live with, then pile it up with stuff until it is fully Soviet compliant. The easiest example is conflating criticism of Islam with racial hatred. As this will be a guaranteed aspect of racism, smart people will likely not sign this ideological declaration of submission to Marxism and Islam, and therefore see their futures altered) The Sault Ste. Marie and Area Local Immigration Partnership (LIP), a Canadian immigration and “anti-racist” organization, is asking residents of the city to sign a pledge to prove they aren’t racist.
Local news syndicate SooToday, first announced the pledge yesterday in an article titled “Here’s your chance to register as a certified non-racist.”

“By taking this online pledge, supporters are making a personal commitment to understand, stand against, and act to eliminate racism and discrimination.

“It only takes a few seconds to go online and fill out the form. When you click submit, your pledge is added to a running count of those who’ve also taken the pledge. There are so many different cultures in Canada; we face the challenges of acceptance and inclusion every day,” states Danny Krmpotich, Program Coordinator – Local Immigration Partnership.”

Please click through to BB.Com for the rest of this item.

H/T Magic Martin, Fjordman et al. I am trying to get someone to do the video in English. So far no takers.

Meanwhile here is the article and an extra in case anyone is thinking of joining their ranks.

STOCKHOLM –  A mosque in suburban Stockholm could become the first in Sweden to sound prayer calls from its minaret after getting permission from police.A Turkish Islamic association in the suburb of Fittja wants to use loudspeakers to sound the Islamic call to prayer at midday on Fridays.

Stockholm police on Thursday approved the group’s application, but said it must inform residents living within a 1-kilometer (0.6-mile) radius of the mosque before it starts to use the loudspeakers. The decision can be appealed by local residents.