Ali Mohamed Dirie [far left in court art picture] and his family [masked gang] are allowed to hide amongst us because they are Muslim. 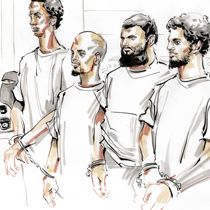 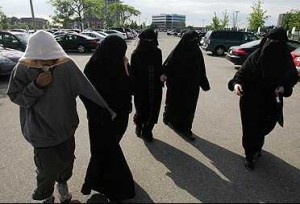 Toronto Star… A Scarborough man whose role in the so-called Toronto 18 was to supply it with firepower so the group could launch a deadly terror attack in downtown Toronto was sentenced in a Brampton court on Friday to seven years.

Ali Mohamed Dirie was given credit of five years in pre-trial custody, meaning he will have to serve an additional two years. The Somali-born man will be eligible for parole in one year.

The 26-year-old pleaded guilty last week to participating in the activities of a terrorist group and confessed he had obtained handguns and ammunition knowing they were for the group’s alleged ringleader.

“Terrorism offences strike at the heart of Canadian values and society,” Durno told the court, as Dirie’s mother, brother and cousin sat expressionless.

Durno also ordered Dirie submit a DNA sample, and be prohibited from handling firearms for life.

In a joint submission, the Crown and defence had suggested a seven-year sentence. However, they disagreed on how much credit he deserved for the time he has already spent behind bars. Crown prosecutor Clyde Bond proposed Dirie serve two more years, while defence lawyer Robert Nuttall suggested that he be released.

After the sentencing, Nuttall told reporters that he and his client’s family were satisfied with the judge’s ruling.

“Mr Dirie, I can say, profoundly regrets and is extremely remorseful for the means adopted in advancing his beliefs,” said Nuttall, explaining that “maturity” had helped his client see the errors of his ways.

The terror plot first surfaced in 2005, when Dirie and a co-accused were stopped at the Canada-U.S. border in a rented vehicle while attempting to smuggle firearms and ammunition into the country.

While Dirie was serving a two-year sentence for gun smuggling, other members of the alleged homegrown terror cell pushed forward with their plot, which they hoped would prompt the withdrawal of Canadian forces from Afghanistan.

Some in the group attended a so-called terrorist training camp in December 2005 and others pushed ahead with an explosives plot targeting the Toronto Stock Exchange, the Toronto offices of Canada’s spy agency and an unidentified military base off Highway 401.

Dirie, who was already in jail, was charged with terror-related offences in 2006, along with 13 other adults and four youths.

Court heard that even after he was incarcerated on gun smuggling charges, he continued to play an important role in the group.

During a March 2006 intercepted telephone conversation from jail with the alleged ringleader, whose name is covered by a publication ban, Dirie was described as “a major asset to the circle.”

According to wiretapped calls, Dirie was trying to find jailhouse connections who could supply fake passports guns for the group.

During their phone conversations, Dirie and the alleged ringleader used code words such as “wives” and “girls” and “black chicks” for firearms, and “food” for ammunition.

Court heard that while in jail, Dirie received a package of books and CDs dubbed a “Qur’an kit,” which contained hidden violent videos of attacks and bombings of military personnel. He was also actively recruiting inmates to adopt hardcore jihadist beliefs.

Although specific details such as terrorism targets were not revealed in these conversations, the calls formed the basis of the Crown’s case against Dirie and prompted his guilty plea, the court was told.

Bond said it was clear Dirie intended to play a role once he was released on parole in May 2006, after serving time on his gun smuggling conviction.

Bond argued that Dirie continued to foster terrorism behind bars by trying to recruit other inmates to his extremist views, which Dirie admitted to doing.

However, Nuttall argued that his client had changed his extremist views and while he was still opposed to the military presence in Afghnaistan, he understood that using violence to bring about change was wrong.

Dirie was the second person to plead guilty. Saad Khalid and Saad Gaya also pleaded guilty to conspiring to cause an explosion. Last year, Nishanthan Yogakrishan was found guilty.