A senior intelligence official with intimate knowledge of the years-long effort to locate and rescue Bergdahl told the Washington Free Beacon that the details of that exchange do not add up.

The official, who requested anonymity because he is not authorized to speak to the press, speculated that a cash ransom was paid to the Haqqani Network to get the group to free the prisoner.

The Obama administration taliban-bergdahl-trade-officials-say/” target=”_blank”>reportedly considered offering cash for his release as late as December 2013. The State Department has repeatedly refused to say whether the deal that released Bergdahl involved any cash payment.

The ransom plan was reportedly abandoned, but the intelligence official insisted that there is reason to believe that cash changed hands as part of the deal.

5 Taliban members back in Qatar

Gateway Pundit has a few good articles on this:

(Reuters) – An Afghan army special forces commander has defected to an insurgent group allied with the Taliban in a Humvee truck packed with his team’s guns and high-tech equipment, officials in the eastern Kunar province said on Sunday.

Monsif Khan, who raided the supplies of his 20-man team in Kunar’s capital Asadabad over the Eid al-Adha religious holiday, is the first special forces commander to switch sides, joining the Hezb-e-Islami organization.

“He sent some of his comrades on leave and paid others to go out sightseeing, and then escaped with up to 30 guns, night-vision goggles, binoculars and a Humvee,”

A record number of insider attacks – accounting for about one in every five coalition combat deaths – last year prompted the coalition to briefly suspend all joint activities and take steps to curb interaction between foreign and Afghan troops.

This really needs to be seen by all, especially with Syria looming
H/T JeanJean

I have not seen this yet but I have become a huge fan of VICE guide to travel who seem to endorse this.

Nato says a man wearing an Afghan army uniform turned his gun on his trainers in the latest green-on-blue attack in the country.

The attack took place in the east of AfghanistanThree American soldiers have been killed in an apparent insider attack in eastern Afghanistan.In a statement, Nato said a man in an Afghan army uniform turned his weapon on the international trainers.

The shooting is the latest in a string of attacks in which infiltrators or disgruntled Afghan police or soldiers have killed international troops working with them.

The killings threaten to shake the confidence and trust of the two sides as withdrawal of most international troops approaches in 2014.

When CNN tells the truth one has to wonder exactly the purpose of it. I suppose its to make the American people OK with the total withdrawal of US forces from the area. ‘These people here are barbarians. Nothing to do with islam, its just Afghans, and this is why we can’t stay’ or something like that perhaps.

In any case I always worry when the legacy media appears to be on our side. Even so, this is a worthy report on a horrible Islamic-inspired practice.

A policeman has been killed and three civilians were injured after a bomb strapped to a donkey exploded at a police post in Afghanistan.

Local government spokesman Sarhadi Zwak says the animal blew up in front of the checkpoint in the Alingar district of Laghman province.

Mr Zwak said Taliban militants were responsible for the bomb, which was remotely detonated. Insurgents are finding new ways to thwart stepped up security measures in their bid to undermine confidence in the Afghan government. 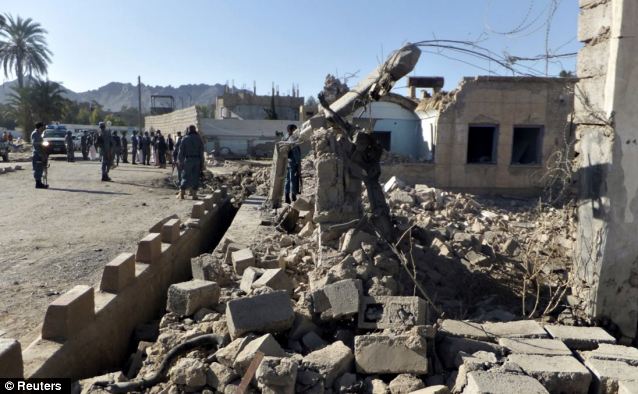 Horror: A policeman died when a bomb strapped to a donkey exploded in Laghman province. This picture shows the aftermath of another Taliban bomb attack yesterday in Farah province

KABUL – Insurgents wearing Afghan army uniforms launched a suicide attack and stormed a courthouse Wednesday in a failed bid to free Taliban inmates, killing at least 44 people, half of them shot in the basement.

The attack — one of the deadliest in the more than 11-year-old war — began about 8:30 a.m. when nine men wearing suicide vests drove into the capital of Farah province in western Afghanistan, evading checkpoints by using army vehicles, according to the provincial police chief. The standoff ended some eight hours later when the last gunman was killed.

Insurgents have stepped up assaults targeting the Farah provincial government in recent months as they vie for control of an area bordering Iran to the west and Helmand province to the east. Farah has become increasingly volatile as the site of a growing drug trade after military offensives in neighbouring areas.

More info at the youtube pages where the videos live