Senior Hamas leader, Ismail Haniya, said the incident was confirmation that Israel’s “aggressive intentions” continued, and accused Israel of not respecting the cease fire. ??? Yes, how dare the Israelis defend themselves. All these good Muslims wanted was to emulate their Jew slaughtering prophet in a manner reminiscent of the calvary charges on defenceless Jewish tribes in the past. Apparently the Israelis did not realize they were to lay down and die. Blame it all on a lack of communication I think. 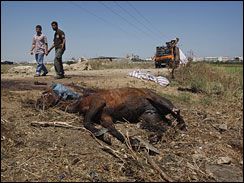 Four Palestinian militants have been killed on Gaza’s border as Israeli forces fired at what they said were men and horses carrying explosives.

The Israeli military said its forces returned fire at a group including a few men wearing explosive vests and five horses loaded with explosives.

Israel said the Palestinians opened fire and tried to plant bombs near a crossing on the Gaza-Israel border.

Palestinian officials said about 10 gunmen were involved in the incident.

The Palestinian health ministry, which is run by the Hamas movement that controls Gaza, confirmed that four fighters were killed in the shooting.

Israeli forces fired on the militants with machine guns and tanks backed up with combat helicopters, the military said

There were no Israeli casualties in the incident, which took place north of Nahal Oz, the main terminal for transferring fuel into Gaza.

Nahal Oz and the nearby Karni crossing, used for transferring grain and animal feed, were closed in the wake of the incident.

It is one of the worst clashes since Israel’s three-week operation in Gaza in December and January.

Both Israel and the Hamas movement, which controls the Gaza Strip, declared unilateral ceasefires in the wake of the fighting.

Although Gaza has been relatively quiet since Israel’s three-week offensive against Hamas ended on 18 January, the border is a flashpoint for sporadic violence.