Why is this man not given full military honors for a soldier killed in combat? 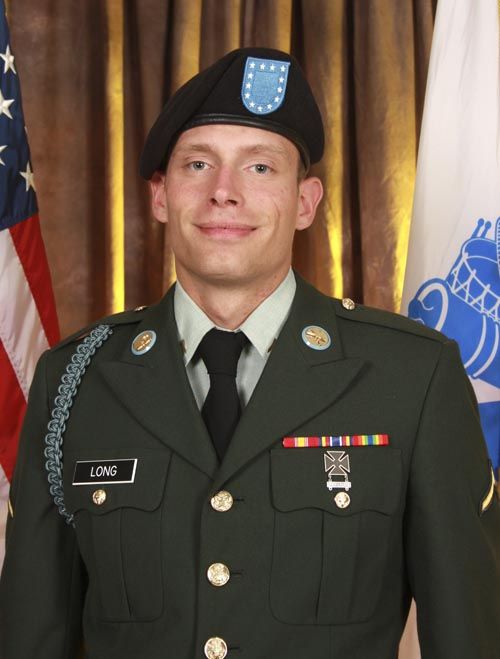 CONWAY, Ark. — A white granite headstone will mark the grave of an Arkansas soldier shot to death outside a recruiting center. His family will decide whether the tombstone says Pvt. William Andrew Long was the first soldier to die at the hands of a terrorist since Sept. 11, 2001.

Mourners gathered Monday to remember Long, shot to death a week earlier outside a military recruiting center. A convert to Islam is charged with capital murder, and according to Little Rock police, targeted Army personnel “because of what they had done to Muslims in the past.”

Caretakers laid Long’s silver casket to rest alongside a Navy veteran of World War II, but how to chisel the private’s gravemarker will remain up to his parents — while federal prosecutors decide whether to press terrorism charges against his killer.

It appears Long was the first service member to die in the U.S. as a result of a terrorist attack since 9/11. Although others have perished during wars in Afghanistan and Iraq, the Defense Department and a count by The Associated Press lists no domestic terror victims’ death in the more than seven years since.

“As bad as it is, people understand when a soldier is killed in combat in a war zone like Iraq or Afghanistan,” Gov. Mike Beebe said outside Harlan Park Baptist Church, where family held a funeral Monday for Long. “It’s a little different — shock I guess is the best way to say it — when one is killed right here at home; targeted because he had a uniform on.”

Daris Long, the private’s father, previously said he believed his son was a casualty of war. Long and his wife, Janet, will have the final say on what is etched into their son’s tombstone at the Arkansas State Veterans Cemetery in North Little Rock, said cemetery director Mitch Shelnut.

At the funeral Monday morning, about 200 people sat as mourners remembered the 23-year-old, who lay in an open flag-draped coffin at the front of the sanctuary. Pastor John Harrington described him as sharp and gifted man with an infectious smile.

Long, known to his family as Andy, sought the right path for himself on his own, Harrington said. Long elected to serve in the Army like his brother, joining a family tradition of military service that extends back to his great-grandfather, the pastor said.

I “believe Andy found what he was seeking when he became a soldier,” Harrington said.

Long was due to ship out Monday to South Korea. During the service, Daris Long read a letter he’d planned to give to his son before his deployment.

Choking up at times, Long told his son to learn his skills quickly, as the chance remained that North Korea could invade South Korea.

“Your day only ends when you’ve done your duty,” the father said, tears in his eyes.

He placed the letter in the casket. His son was to have deployed on what turned out to be the day of his funeral.

William Long’s sister, Vanessa Rice, said she spent time with her brother the day before he was killed. They floated on the upper portion of the Buffalo National River in north Arkansas.

Rice said her brother made her pick between skydiving and the float trip.

“I told him I had to pass on that” skydiving, she said, laughing as she cried.

A procession of motorcycles led the hearse carrying Long’s body to the North Little Rock cemetery. There, Army Chaplain Jeremy Miller urged those there to cast aside thoughts of revenge, as God will have the “ultimate judgment.”

Miller also said Long, who was outside smoking a cigarette with Pvt. Quinton I. Ezeagwula at the time of the shooting, saved the lives of others inside the center. Ezeagwula was wounded, but survived.

“If he hadn’t been standing in the spot, things could have been worse,” Miller said.

In the distance, practice rifle fire could be heard from a nearby National Guard base.

Police arrested Abdulhakim Mujahid Muhammad, 23, of Little Rock shortly after the shooting. Muhammad faces state charges of capital murder in Long’s death and 16 counts of committing a terroristic act by shooting a rifle in a crowded place. Federal prosecutors have yet to say whether they’ll seek additional charges against Muhammad.

Muhammad, who could be executed if convicted, pleaded not guilty to the charges. Little Rock District Judge Alice Lightle issued a gag order in his case Monday, after a prosecutor complained about Muhammad’s lawyer talking about how his client was tortured while imprisoned at a prison in Yemen. Yemeni officials denied the claim.